The dynamics of GDP growth in Kazakhstan

Comparative analysis of economic development of the national economy is based on a study of the macroeconomic indicators’ dynamics. Calculations of these indicators may partially differ depending on the country, while a country with a market economy in their calculations are based on a methodology recommended by the Statistical Office of the United Nations.

Gross domestic product is an indicator evaluating the produced goods and services per calendar year in the national economy. The country’s GDP may be expressed both in national currency and, if necessary, reference and converted at the exchange rate in foreign currency, and can also be submitted to the purchasing power parity (PPP) for more accurate international comparisons.

Purpose of measuring GDP is to analyze the rate of dynamics of the national economy, the allocation of costs for goods and services, investment and savings, the percentage increase in production due to inflation and the determination of the proportion of income earned, which is used for consumption [1].

Kazakhstan, as a country with a market economy, relies heavily on this macroeconomic indicator for macroeconomic analysis of the national economy. According to the World Bank, over the last ten years GDP dynamics is rapidly increased (fig. 1).

The country’s GDP growth was influenced by oil prices, growth in consumer lending, but as soon as oil prices declined, the rate of growth of Kazakhstan’s economy began to slow down.

From 2005 to 2014 years GDP growth per capita in our country declined from 8.7% to 4.5% (fig. 2). Per capita GDP is indicative of the degree of the country’s wealth and its ability to provide a higher standard of living.

The main reason for the decline is the instability in the global macroeconomics. In recent years, there has been an adverse change in GDP. According to experts, the improvement of the situation in the economy is predicted only at the year 2017. As of 2014, GDP growth amounted to 4.3%; it is assumed that you will fall every day, while the global economic environment will not find levers of stabilizer. 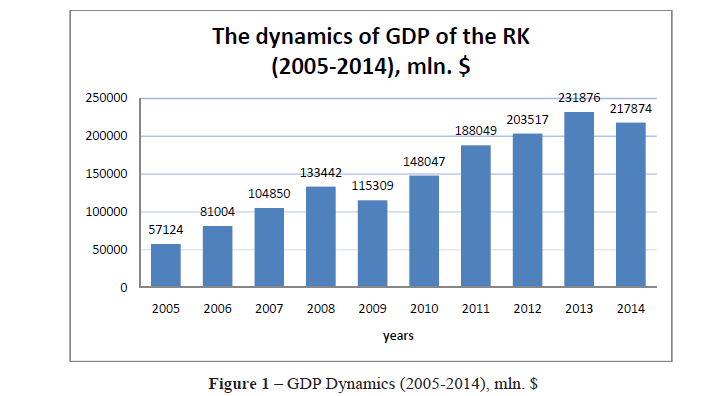 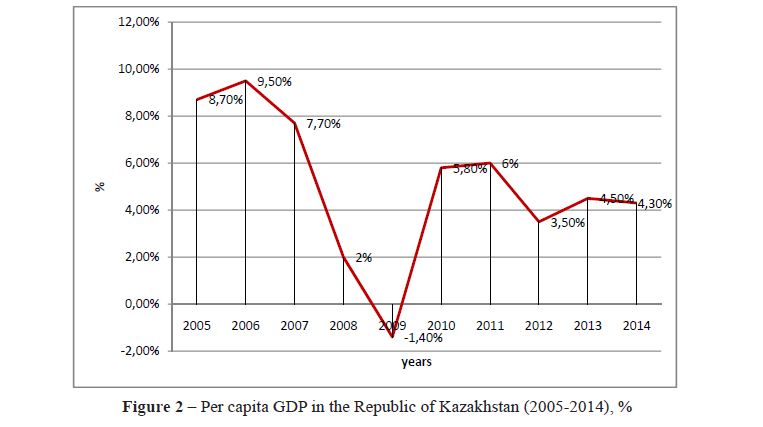 Many analysts cannot forecast when it’s finished the decline in oil prices. This is due to the specificity of trade in fuel. Real goods on the international market are only 5% of the total turnover. One of the main reasons for the low price of «black gold» is a drop in global demand (Fig. 3). 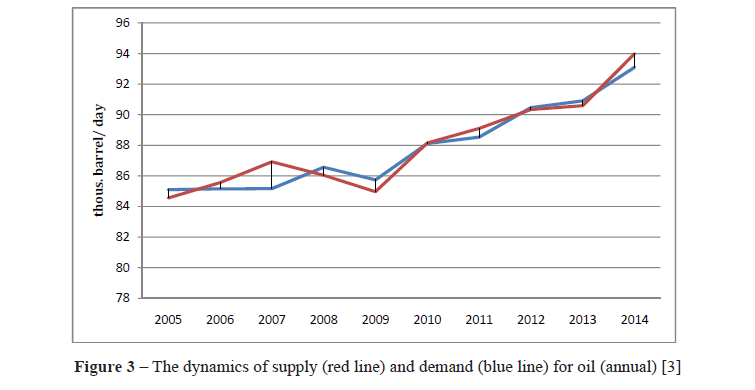 The dominance of supply over demand visible in Fig. 3. An excess of production over consumption recorded approximately in the year 2010, and constantly growing. From further falling oil futures quotes will save only reduced production by OPEC. But now the position of the members of this organization are not so is monolithic.

A brighter picture of the prevalence of supply over demand can be seen in Figure 4.

Most experts agree that at present, oil is strongly underestimated and will grow in the coming years, but not up to 100 dollars per barrel. International rating agency Fitch made a more optimistic forecast. According to its representatives, in 2016, oil price will be $ 60 per barrel. They attributed this slowdown in economic growth in developing countries (from 4.7% to 4%) and increase the supply of black gold.

Measurement of key indicators in Kazakhstan became difficult due to devaluation of the tenge. The main indicators, price of goods and services in the global market are priced in dollars. According to the Committee on statistics of the Republic of Kazakhstan in the Ministry of the National Economy, in the 2014 GDP grew by 4.3% and amounted to $ 38.0 billion tenge [5]. However, the statistics are disputable, as GDP fell in dollar terms at 14%.

Some economists were questioning the accuracy and correctness of the GDP, defining it as a specialized tool for determining the quantity, rather than quality, but how accurate this figure measures the economic well-being of the nation? It’s a very interesting question, which causes a great deal of controversy for a number of reasons.

Goods, that don’t have a market evaluation and not counted in GDP. This «do-it-yourself» actions, which is widely used in household: inside repair, charity work, cooking, etc.

However, understanding the true dynamics of GDP is important for objective diagnosis of the state of the economy. And new solutions are required for economic growth of Kazakhstan’s economy.

From the year 2030 is expected decline in oil production in Kazakhstan and, respectively, while maintaining the current growth model, this will lead to the extinction of Kazakhstan’s economic growth, if not find new growth drivers.

In our view, conduct system requires economic reforms to improve the rate of GDP growth in the future. Driver of long-term economic growth needs to become middle class, due to its social role, as the stabilizer, a provider of skilled manpower, economic contributor, the primary employer defining political direction of public policy. Such as, training of highly qualified personnel, support infrastructure projects, support for productive activities, increasing productivity.