Innovation development of smes in Kazakhstan

In Kazakhstan, innovation activity of all enterprises of the real sector of economy remains very low; innovative entrepreneurship doesn‟t define overall climate in SME business: in 2014, contribution to the economy by innovative SME made up to 1.5% (Committee on Statistics of MNE RK, 2015).

A shift from export oriented economic model to innovative economics in Kazakhstan is necessary. Today, the State is significantly lagging behind than other developed countries according to innovation driven indices. The Republic of Kazakhstan can be competitive by shifting to a new model of economic growth and by rapidly reducing lag behind. The State needs effective strategy for growth through innovation by implementing the development of commercial innovation.

Many economists and practitioners focus their attention on the scientific support of innovation management in the economic and social spheres. Individual theoretical and practical aspects are considered in the works of Bianchi et al. (2010), Rothwell and Dodgson (1991), Acs et al. (1997), Edwards et al. (2005), Jenkins (2009), Çakar and Ertürk (2010) and others.

A great contribution to the theory of innovation within the changing paradigm of higher education is made in the works of Kurmanov et al. (2015), Yeleussov et al. (2015).

Kazakh scientists also try to determine factors that have a major influence on innovative activity of the SME, Dana (2010), Radosevic and Myrzakhmet (2009), Smirnova (2013). However, a significant number of scientific issues that are related to effective state management of innovative processes within the economy remain outstanding in the context of Kazakhstan.

In order to evaluate key factors, which have an influence on innovation activity of SME, Committee on Statistics of MNE RK statistical d a t a w a s u s e d . R e s u l t s o f research were derived from: the sample group analysis of 24,068 SMEs in 2014 and 8,022 SMEs in 2004 SMEs holding their activities in the Republic of Kazakhstan, statistical data, expert‟s opinion on the innovation potential of the State. 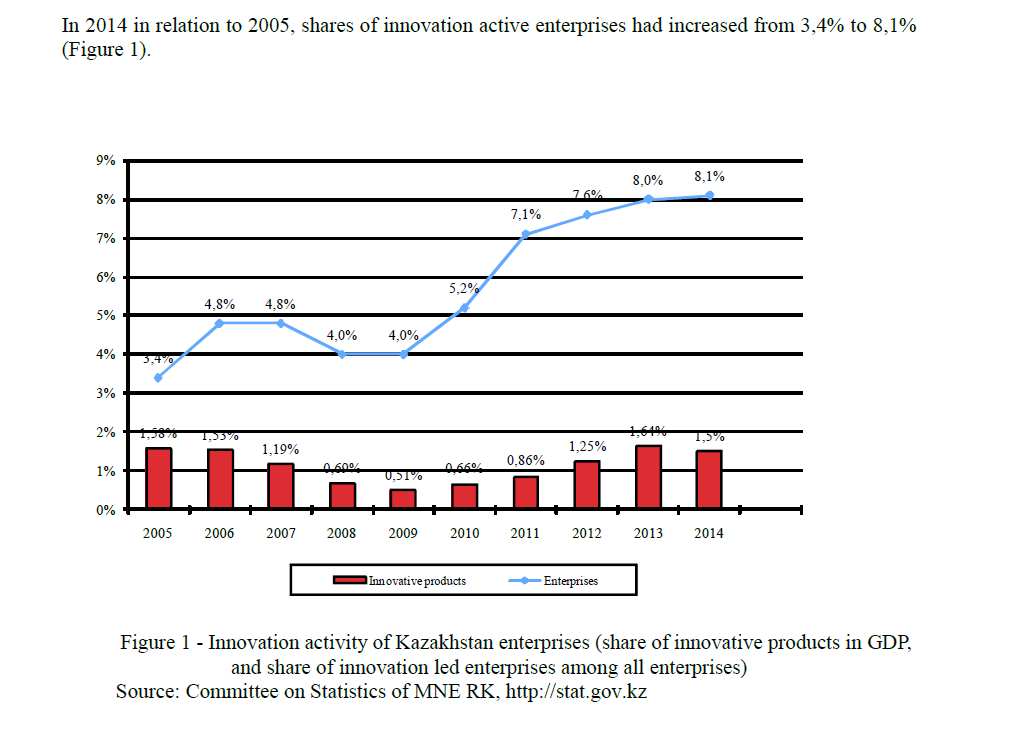 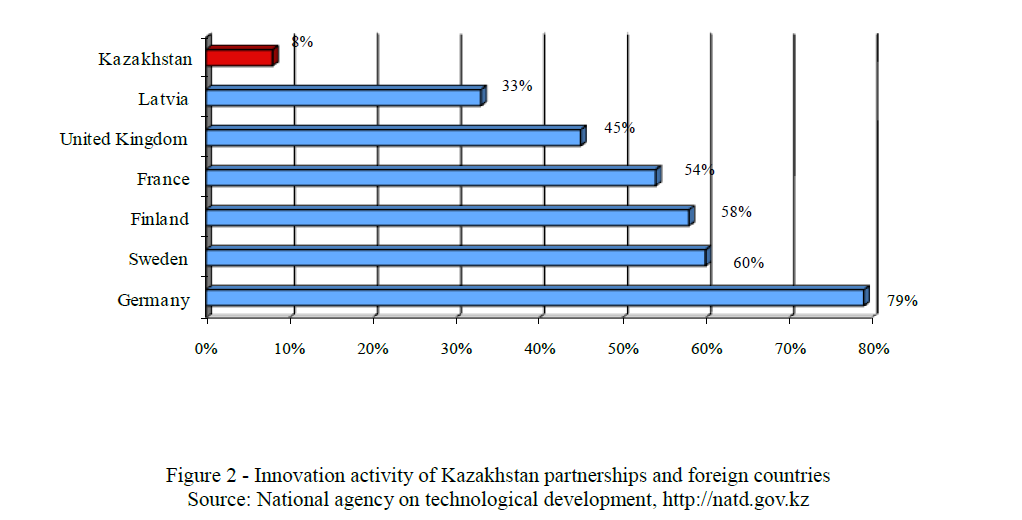 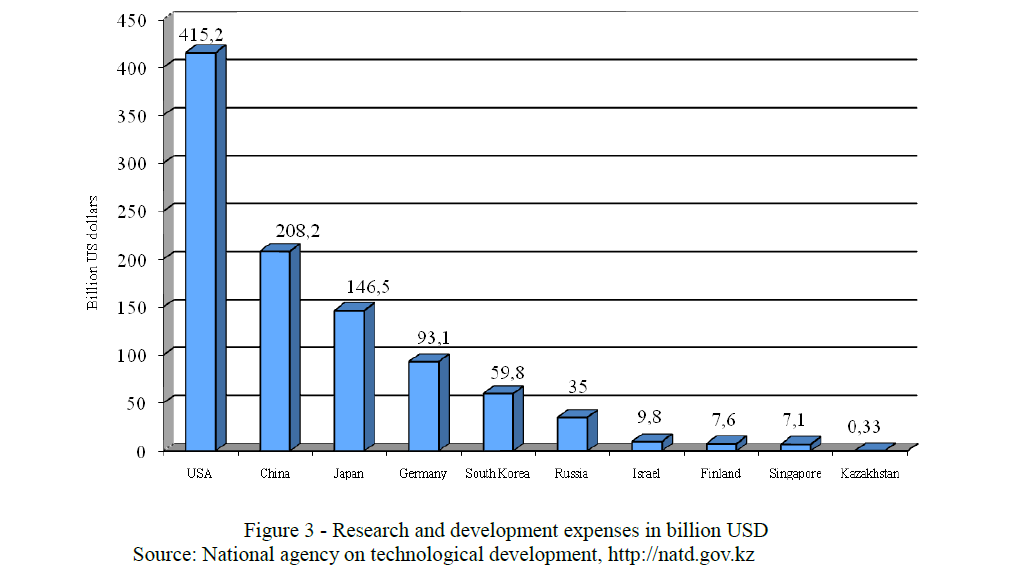 It is necessary to mention, that according to European Strategy 2020, one of the five general target indicators is increasing expenses on research and development in the European Union (EU), up to 3% of GDP. In 2011 the average indicator in the EU was 1,94 %, which is higher than China (1,84 %). Among the other European countries, Finland has one of the highest indicators (3,78 %). Indicator of research and development expenses of GDP in Kazakhstan is still low 0,17 %. However, it is necessary to mention that local science system is in the beginning of future development (National Agency for Technological Development, 2013).

According to number of researches, performed by R&D, Kazakhstan is lagging behind many foreign countries (Figure 4).Analyzing the number of total researches per thousand total employments Finland exceeds Kazakhstan by 12,2 times, South Korea by 9 times, Singapore by 8 times.

Therefore, innovation development in Kazakhstan as well as other factors is restrained by personnel deficiency, capable to manage innovation processes and projects. Despite positive statistics in the scientific sector, science staff in Kazakhstan requires effective State support and additional stimulation.

Little activity of SMEs in Kazakhstan in implementing innovation urges the importance of determining factors of low activity and implement actions of developing innovation active processes in SMEs.

Table 1 contains data on evaluating factors affecting innovation activities in the period of 2004 to 2014.

Data of the 10-year period demonstrates change of SMEs opinions on factors, influencing SMEs opportunities in carrying out innovation activities. 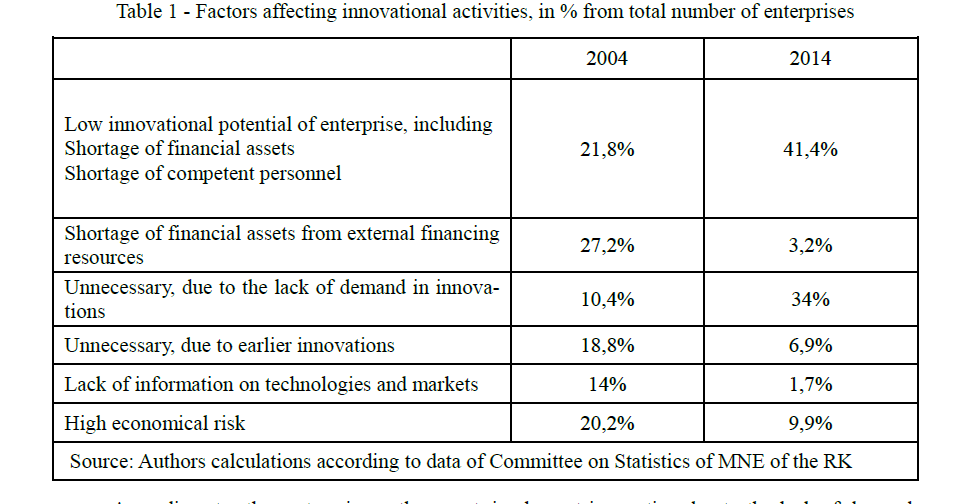 According to the enterprisers the most critical factors were: lack of financial resources, and competent personnel. These two factors were mentioned by 41,4 % of questioned SMEs in 2014 and 21,9% SMEs in 2004.

In 2004 SMEs were highly dissatisfied with loan funds. In 2004, 27,2 % of respondents mentioned high interest to borrowed capital. However in 2014, only 3,2% of questioned SMEs, selected the shortage of financial assets, restricting innovation activity.

Another critical matter was the lack of information on new technologies, and undeveloped corporate communications. 1,7% in 2014 and 14% in 2004 of SMEs have stated these problems.

The conducted analysis has shown a very low innovation activity of small and mediumsized enterprises in Kazakhstan compared to other countries.

Business communities shall recognize that companies‟ ability to implement innovations can be a powerful trigger to competitive advantage and process effectiveness, which are so important for small companies. Having the understanding that research and development expenses are investments into future development.

Low innovation activity of SMEs together with growth factors (it is important to note, that all factors determined in this paper, were also found in another researches by other experts, only confirms the important of the matter) must be reevaluated by Government. Without institutional change, effective financial mechanism, training and development of personnel, amendments to laws and regulations, development of small and sized enterprises is impossible. Not only innovation led but also business in general.