Morphofunctional study of the rat intestine in experiment

Currently in medical practice, an important place belongs to herbal medicines, because they have a wide range of biological effects, which allows them tube used for the prevention and treatment of many diseases.

Diseases of the gastrointestinal tract occupy a leading place in the overall morbidity structure of humans and animals, the balance between various types of intestinal microorganisms is disturbed, and general metabolic disorders and neurohumoral disorders have been developed. In this regard, the morphological study of the pharmacological action of the medicinal plant of buckthorn fruit on the organs of the digestive tract is relevant. Studies have shown that the use of buckthorn fruit causes in rats the improvement of metabolic processes. The effect of buckthorn fruits on the organism of white rats showed that there are the small intestine reversible compensatory, adaptive reactions, a small plethora of capillaries of the villi and vessels of its own shell, and a defensive reaction in the form of a goblet cell hyper secretion.

Histological study of intestinal preparations of the thin section of white rats of the second group revealed an increase in destructive changes, there have been observed an inflammatory reaction in the mucous membrane of the villi, which often led to the complete destruction of the villi of the intestinal epithelium with a large number of necrotic cells, also the protective barrier function of the intestine was impaired.

Introduction. In medical practice, for the prevention and treatment of various diseases anti-inflammatory, antimicrobial and regenerating herbal medicines are widely used. Despite the progress made in the field of the synthesis of medicinal substances, medicinal plants remain an important source for obtaining medical drugs [1-7]. More than 40% of Phyto preparations were used in modern medicine an obtained from vegetable raw materials for the treatment of all diseases, including such socially important as cardiovascular, oncological, infectious diseases, diseases of the gastrointestinal tract and others. In this regard, special attention attracted to herbal medicines, which have the advantage of being able to be involved in metabolic processes, low toxicity, and the possibility of long is term use without the appearance of toxic effects. In addition, herbal medicines are more affordable for the general population. According to the literature, it known that the cost of a course of treatment with herbal medicines is 25 times lower than in the case of treatment with synthetic analogues [8-12]. The introduction of new indicators, the study at the morphological level, the use of modern methods for the quantitative determination of active substances are required to assess the quality of raw materials. Therefore, the study of dosage forms, alternative to water extraction is an important task. The development of herbal medicines for the treatment of socially significant diseases, in particular the gastrointestinal tract diseases, is also vital.

In our work, we have chosen a medicinal plant of natural origin, buckthorn, containing biologically active substances.

Material and research methods. Studies were conducted on 30 white outbred female rats of three months of age with an initial body weight of 170-200g. During the experiment, all ages were in the same standard vivarium conditions. Animals were decapitated at a strictly fixed time is between 09 and 10 am. The object of the histological main populations of cells of thin and thick intestines of intact and experienced rats. All animals divided into three groups: The first group is the control animals fed the usual feed mixture (basic diet), the second group is animals that received high calorie fat diet, and the Third group is animals that received high calorie fat diet and buckthorn fruits. Water experimental animals received ad libitum. The animals slaughtered on the 30th day of the experiment. Generally accepted methods for preparing slices were used for the histological study [13].

The results of the study. Histological examination of the control group of rats showed that the intestine has a structure that corresponds to the norm. The walls of the small intestine consisted of the mucous membrane, submucosa, muscle and serous membranes. The surface of the mucous membrane has an uneven appearance; thanks to a well is developed system of folds, lint and crypts. In the depth of the mucous membrane, there were numerous cavities of the mucous membrane which are intestinal crypts also covered with a single is layer epithelium in which cambial and stem cells were located (Figure 1). The relief of the mucous membrane of the large intestine characterized by the presence of folds and crypts, of which there is much more than in the small intestine, and the absence of villi. Crypts are more often, their clearance is wider. In single epithelium layer are many goblet cells. The goblet cells of the large intestine of control rats have a well developed nucleus, which is located on the basal or apical edge of the cell, depending on the secretory state of the cell. The muscular coat expressed rather moderately and consists of a small number of smooth muscle fibers parallel to each other (Figure 2).

Figure 1 The thin intestine is normal 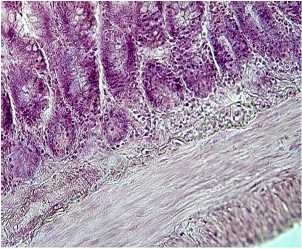 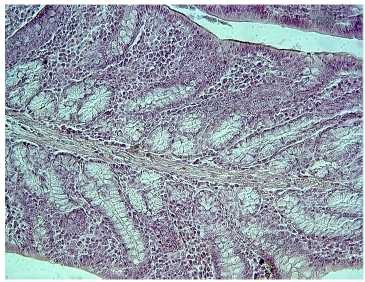 The results of the study of histological preparations of the second group of rats in the small intestine showed that the epithelial villi had an elongated shape, desquamation of epithelial cells pronounced, erosion appeared in some areas, manifested by rejection of the epithelium of the villi with exposed lamella, and necrosis of villi epithelial cells are observed. An inflammatory reaction observed in the mucosal base of the villi. In some places, this led to the complete destruction of the villi. The strong destruction of the intestinal epithelium with a large number of necrotic cells noted in our studies disrupted the protective barrier function of the intestine (Figure 3). In the large intestine, destructive changes are noticeable. In the epithelium integrity was broken, and a small desquamation of the epithelial layer is observed. There is a hyperemia of blood vessels and swelling of the mucous membrane of the colon (Figure 4). 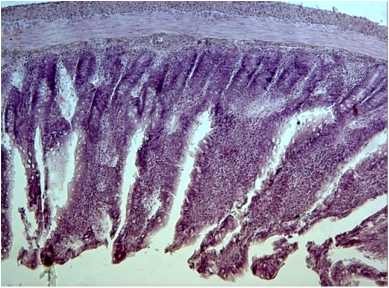 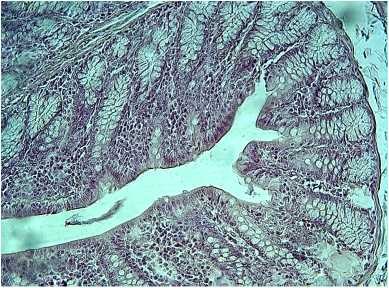 Thus, a histological study of the intestines of rats that received a high calorie fat diet for 30 days showed marked changes in the destructive nature of the small intestine, obesity, and necrosis of the villi, edema, and minor morphological changes of the compensatory is adaptive nature in the large intestine.

Buckthorn fruits caused minor changes in the intestines. The study of the small intestine of the third group showed partial destructive changes that were of compensatory and adaptive nature and were completely reversible. During the histological study of this group of the large intestine of white rats, partial changes have been detected; compensatory adaptive phenomena were revealed in the form of vascular hyperemia and mucosal edema.

Conclusion. Treatment and prevention of diseases of the gastrointestinal tract using the action of buckthorn alder is primarily due to biologically active substances, antraglycosides and chrysophanic acid, which reliably and in a short time reduces the destructive changes in the digestive tract. Under the influence of buckthorn fruit, the absorption of fluid by the mucous membrane of the large intestine slowed down manifested in increased peristaltic movements. Studies show the use of buckthorn fruit enhances the paths of biological activity in order to improve the general condition of the animals, improve metabolic processes, the active action of pharmacological aspects. The effects of buckthorn fruits on the organism of white rats cause a plethora of capillaries of the villi and vessels of its own shell in the small intestine, as well as a protective reaction in the form of hyper secretion of goblet cells. Histological study of intestinal preparations of the thin section of white rats of the second group revealed an increase in destructive changes, an inflammatory reaction was observed in the mucous membrane of the villi, which often led to the complete destruction of the villi of the intestinal epithelium with a large number of necrotic cells, and the protective barrier function of the intestine was impaired.