Today, despite the enormous success in the development of synthetic drugs, a large number of medicinal preparations permitted for use in scientific medicine include active substances of higher plants. Medicinal plants are a source for studying their use as a drug, since they are little studied. It is unacceptable to use any drug without knowing all of its pharmacological effects.

In our work, we studied the mechanism of the action of a medicinal substance based on plant origin of Silybum Marianum on rat liver. The liver is a natural filter in humans and animals; it is a unique internal secretion organ capable of self-healing, regeneration. However, with prolonged exposure to negative environmental factors, toxic substances, under the influence of various diseases, the liver functions weaken, leading to pathological processes. A morphological study of rat liver in an experiment showed that the use of Silybum Marianum improves metabolic processes, helps to restore the structure, and normalizes the basic functions of hepatocyte cells. In addition, has hepatoprotective properties.

Introduction. The liver belongs to the vital organs of the human body. It is the liver that responsible for the destruction and neutralization of poisons and toxic substances, purifying the blood from impurities harmful to health. In the liver, bile is produced, which is involved in the breakdown of fats and intestinal stimulation. Some vitamins and minerals necessary for the normal functioning of a person a deposited in the liver tissues. It is for this reason that this body needs to pay special attention, because if is functionality violated, the whole body will suffer. In order for the liver to function normally, it is must be periodically cleaned of the toxins that accumulate in it. In addition, for these purposes, a unique Silybum Marianum plant is a good example, which has a regenerating and anti is inflammatory effect on the liver, has numerous healing properties, and is ideal. In the Silybum Marianum, there are trace elements like zinc, selenium, copper, and the whole group of fatsoluble vitamins, quartering, flavolignans, and polyunsaturated fatty acids is only about 200 components. Silybum Marianum is a good antioxidant that prevents premature aging, neutralizes free radicals that destroy biological structures. The substances that the plant contains protect and regenerate liver cells. Under the influence of toxic substances in the organs, pathological processes occur, accompanied by morphological changes in the cells and tissues forming them. Disruption of the structure of one of them reflected in the functional and structural properties of other tissue and cellular systems, which leads to certain disruption of interstitial interactions. The mechanism of action of Silybum Marianum at the molecular and cellular level is very important, but it is equally important to study the morphological processes at the cellular level, since they are little studied [1-13]. In this regard, the main goal of our work was the morphological study of a medicinal plant of natural origin of Silybum Marianum, its effectiveness on the structure of the liver of rats in the experiment. Elucidation of the biological mechanisms of action of drugs based on plant origin at the intercellular and interstitial levels is of great importance for understanding the pathogenesis of various diseases.

Results of the study. The study of the liver of rats in the control group had a classic tubular structure. The hepatocytes are large, have a clearly visible cell membrane, large rounded nuclei are located in the center of the cell, and one or two nucleoli are visible in the nuclei. Met binuclear cells. Blood sinusoids and minor vascular sclerosis are noted (Figure 1). In the cytoplasm of individual sites of hepatocytes marked granularity. Single bile ducts found in the parenchyma. They had the correct structure in the form of tubes, covered with epithelium.

Microscopic examination of the liver of rats of the second group, who received a 40% aqueous solution of ethanol at a dose of 0.2 ml / kg, 10 times the hepatocytes diluted with water were expressed in irregular hexagonal forms, the beam structure was not preserved. In the parenchyma, binuclear cells an often found, accompanied by physiological polymorphism. There is a disturbance of cellular contacts, accompanied by a weak swelling of the stromal (Figure 4). The vessels of the parenchyma a rounded in shape, lined with a single is layer flat epithelium. In the lumen of blood vessels, there are single cells of the bloodstream. In medium and large vessels, plethora is noted. Expansion of the perivascular space observed in the liver parenchyma, sinusoids a widened in places (Figure 5). The bile ducts a lined with single is layer cubic epithelium, many of them are deformed. Periportal sclerosis is also noted.

Figure 5 Expansion of sinusoids and perivascular space. Stained with hematoxylin and eosin. in x100 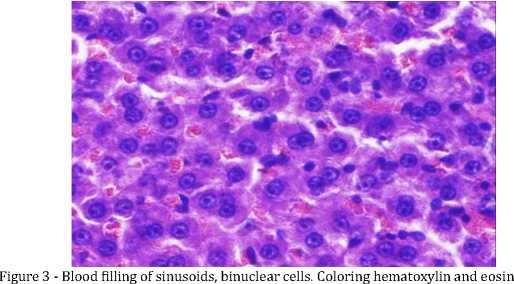 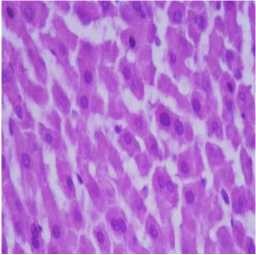 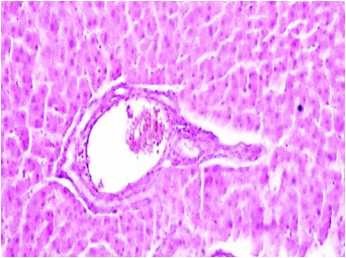 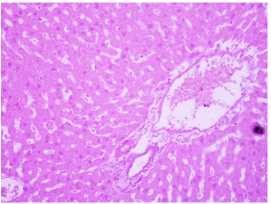 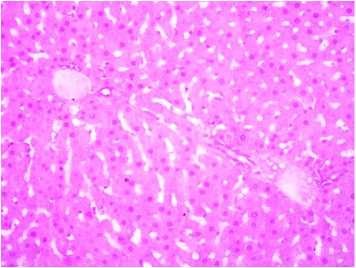 Thus, rats of the third group after the introduction of a 40% aqueous solution of ethanol at a dose of 0.2 ml / kg, 10 times diluted with water and a decoction of Silybum marianum seed powder found that partial destruction of cells observed in the liver of rats, small edema, and vascular deformity. The use of medicinal plants has a stimulating effect on the liver cells and helps to restore their structure, normalizes the basic functions of the liver and protects the hepatocytes from pathogenic action, improves metabolic processes.

Conclusion. The liver is a complex organ in its action plays an important role in maintaining a constant body temperature and produces heparin that prevents blood from clotting, and most of the proteins contained in blood plasma, participates in metabolism, neutralizes substances that are dangerous for the body, accumulates nutrients substances and vitamins, produces bile, contributing to the breakdown and absorption of fat.

Morphological changes in the rat liver after poisoning with a 40% aqueous solution of ethanol at a dose of 0.2 ml / kg, in 10 times diluted with water, destructive changes of hepatocytes are observed, the inside slice of necrosis alternate manifestations are seen, as well as the cells of various sizes, including a large number of dual and multi core, kernels of various sizes, which are swollen, where the clarity of the beam structure is disturbed. Hydropic, beam and fatty degeneration have a small focal character. In various parts of the hepatic lobules, small foci of necrosis of the parenchyma met with stromal destruction.

Because of the study, it is clear that poisoning of rats leads to functional disorders, as well as pathological changes in the structure of the liver. When using a 40% aqueous solution of ethanol at a dose of 0.2 ml / kg, 10 times diluted with water in combination with seed powder of Silybum marianum found to have a versatile biological activity, restorative effect, antioxidants, hepatoprotective properties.