The development of specialized products when exposed to extreme factors

Biologically active additives may be as products of vegetable, animal, mineral, microbial origin, or they could have combined composition. They make possible to fill in alimentary deficit of modern human and to renew his ration with necessary vitamins, mineral matters, microelements, vegetable fibers and other ingredients. In the article given the results of research of the morphological analyze of rats heart by effect of gamma irradiation in 6 gray dose with using of antiradiation, detoxicant and immunomodulating special products.

Introduction. Most leading physicians and scientists around the world believe that dietary supplements are the ideal, safe and reliable way to improve health, preserve longevity and facilitate the treatment of diseases.

New specialized food products and biological active additives with polypotent action and directed biomedical properties can be used to increase the adaptive capacity of the body to act on the body of adverse environmental factors, including space flight. The use of specialized products will reduce the period of adaptation, improve the General condition of the human body and animals. It is known that a complex effect on the human organism to extreme factors of the external environment can lead certain changes in physiological and metabolic processes, what largely leads to increased energy costs, increase the need certain nutritional factors. The problem of adaptation of the organism to the effects of adverse environmental factors, including morphological and functional changes, remains one of the urgent problems of modern biology and medicine [1-10].

Nutrition is the most important factor of the environment, on which the health and well-being of a person depends in a decisive way and is also the most important physiological need of the organism. Metabolism, function and structure of all cell tissues and organs depend on the nature of nutrition. The nature of nutrition can affect the degree of negative effects on the body of potentially hazardous chemicals and adverse environmental factors [11-15].

The role of the main biological active additives, consideringmany new information about the mechanisms of their therapeutic and preventive action, should be considered from the perspective of biologically significant impact on the course of metabolic processes in conditions of both healthy and sick organism[16- 25]. The use of specialized products and biological active additives will improve the stability of the body during the flight and reduce the period of adaptation and readaptation changes in the body. Considering the above, recently there was a need for morphological study and development of specialized products depending on adverse factors

Results of the research.Histological examination of rat myocardiumof the control group on semi-thin sections showed the usual structure of muscle fibers, separated by narrow intercellular spaces. Bloody capillaries were located along the muscle fibers. Endothelial cells of capillaries contained nuclei of elongated form. In the central part of the muscular fibers were located basophilic nuclei with large nucleoli. Serous membranes are smooth and shiny (Figure 1).

Histology of the myocardium of the rats of the control group. 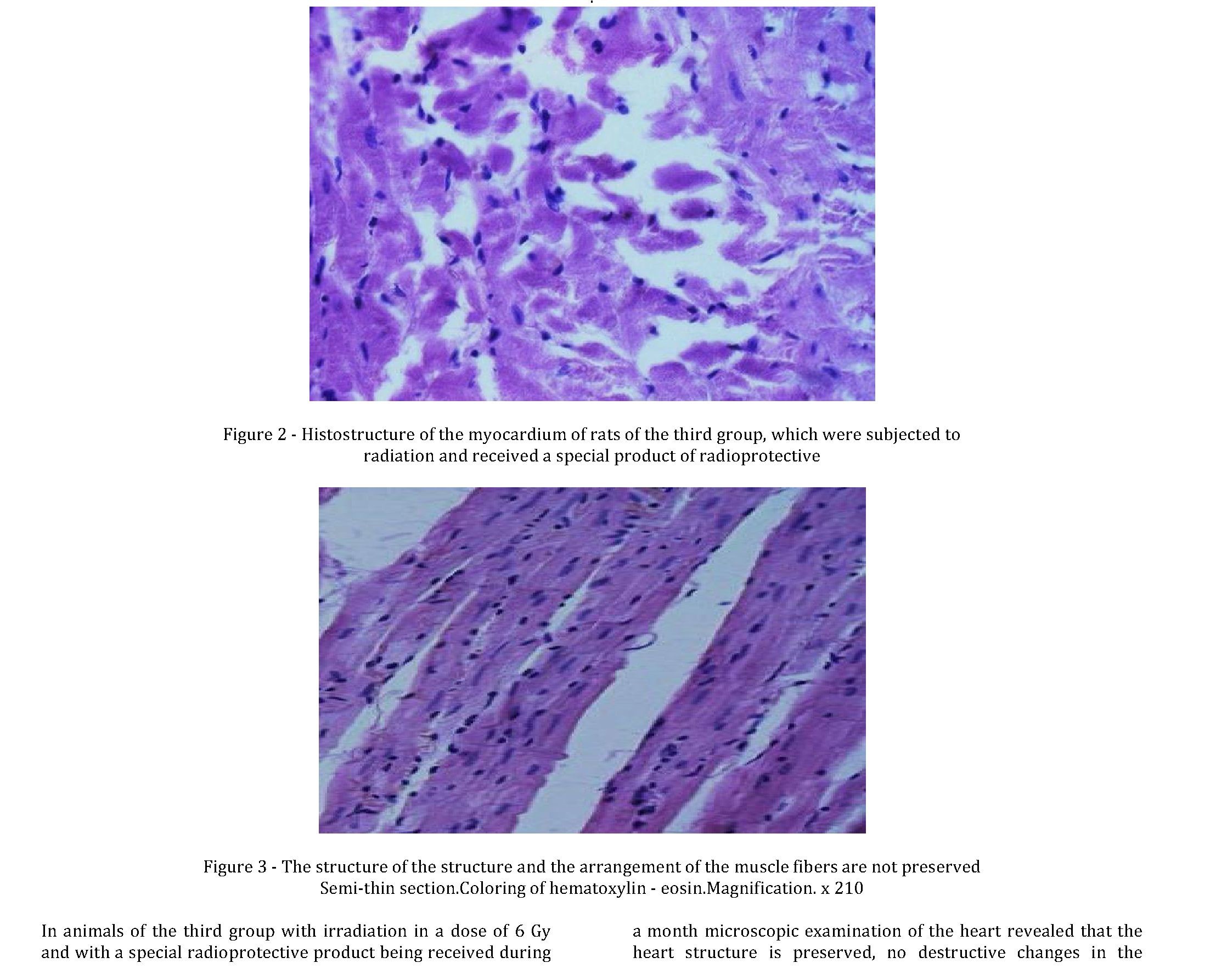 Histological examination's results of the second group of experimental animals that were exposed to gamma irradiation without biologically active additives being used showed that the structure and arrangement of muscle fibers are not preserved, intramuscular edema was marked. In a microstructure of the examined organs of heart, pathological changes are visible: fibers of the interlayer of loose connective tissue contained a large number of thickened vessels, accumulation of rounded and elongated cells in the form of foci, circulatory disturbance in form of plethora, plasmorrhagia, individual areas of muscle fibers were fragmented. Histostructure of the myocardium of the second group's rats , which were exposed to gamma irradiation without the use of biologically active additives is represented in Figure 2.

Histoconstruction of the myocardium of rats of the second group, which underwent gamma irradiation without the use of biologically active additives.

cytoplasm of the cells of the organs were detected. Overall condition is good. In the region of the heart there is a slight consolidation of the vessels' walls, the endothelium is slightly swollen (Figure 3).

The histostructure of the heart of the fourth group's rats who underwent radiation and received special detoxifying product.

In animals of the fourth group with radiation at a dose of 6 gray and receiving within a month detoxifying special product in the heart on drugs clearly revealed, transverse streak fibers loose connective tissue containing a large number of vessels of various sizes, arteries and lymphatic capillaries. Myocardium fibers are oriented in different directions: longitudinal, circular and oblique (figure 4).

In histological examination of the heart of the fifth group with radiation at a dose of 6 gray and received within a month immune modulating a special product in the muscle-elastic layer shows partial hemorrhage, inter-muscular edema with full blood vessels. No other changes were detected (figure 5).

Conclusion. As a result of morphofunctional study of internal organs of rats, which were exposed to radiation, without using dietary BAA, violation of compensatory-adaptive reactions, destructive changes of heart organs in the form of pronounced edema, inflammatory processes was found. In animals of the second and third groups all physiological and morphological parameters weresaved, no changes. Weakness, malaise, behavior changes in rats not detected, General condition normal, total weight, eyes and coat are normal. Rats of the fourth group did not cause severe pathological and physiological abnormalities. Morphological analysis showed only minor changes in the heart expressed a slight expansion of muscle fibers. As a result of histological studies of the fifth group in the heart, the foci of parenchymal dystrophy were noted. Case not detected, satisfactory condition. Weight in annualized rate without changes

Thus, the histological studies made it possible to draw the following conclusions: 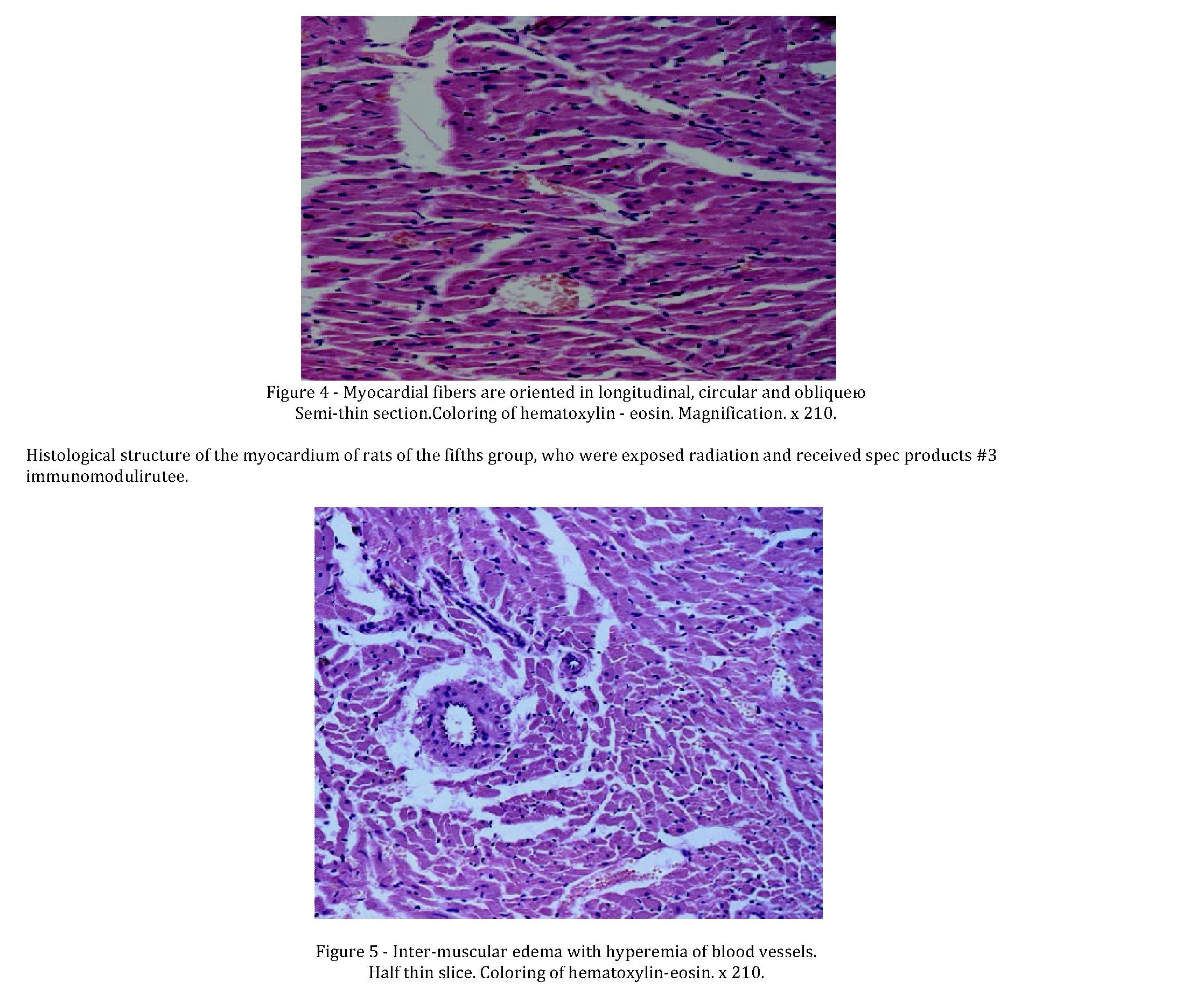