These ultrastructures over of hepatocytes of rats are in-process brought. The morphological indexes of liver were investigated at the combined influence of physical activity and valuable ration of feed with a different power value.The presence of the expressed fatty dystrophy of hepatocytes is shown for rats being on the high-calorific balanced diet, and feed low-caloric vitaminizedпещей educed absence of the looked after phenomena.

Introduction. Basis of the traditional mode of life is made by a rational feed, main principle of that is an observance balanced consumption of food on proteins, fats, carbohydrates, by vitamins and mineral substances. However, to attain practically required balanced not succeeded even at the large variety of food. In addition, the norm of albumen offered by dietitians in 1,5-2 times excels that is required to the man, in obedience to Worldwide organization of health protection. At this surplus and artificially balanced feed an organism does not get along at the leadingout of products of disintegration of nutritives, and increasing weight limits motive activity, what results in the most various diseases.

Generally known, that a liver is the central organ of exchange and very sensible to food influences. These ultrastructures over of hepatocytes of rats are in-process brought. The morphological indexes of liver were investigated at the combined influence of physical activity and valuable ration of feed with a different power value. The presence of the expressed fatty dystrophy of hepatocytes is shown for rats being on the high-calorific balanced diet, and a feed the low-caloric vitaminized food educed absence of the looked after phenomena.

Maintenance of normal structure of liver requires a conformable in a quality and quantitative relation feed. It is already known since olden times, that food must contain, along with sufficient calorie content, also and vitamins, mineral substances and several of proteins, thus the last can be transferable amino acids. At the same time, as before about the lack of albumen drawn conclusion only on negative nitrous balance, and on the halt of height of young animals. Lately the special attention is turned on insufficient by formations of enzymes of liver.Further important and interesting information was got as a result of chemical and histological researches of maintenance of fat in a liver. While at the mixed food maintenance of fat in a liver makes 5%, at a qualitatively unsuitable feed maintenance of fat in a liver can rise to 10-15%, and it after a while can result in the irreversible defeat of liver [1-4].

On the basis of researches evidently, that fats and "transport" in form lecithin: fat from a depot acts as a lecithin in a liver, and from a liver fats are translated in a depot as a lecithin. Education and breaking up of phosphotides take place in a liver. From the results of research, touching the mechanism of action of lipotrophic substances, flows out, that all lipotropic substances, after an exception only of heparin, an eventual account is assist formation of cholin. In respect of action of it, then this question is not yet found out, action, are base on lack of lipotrophic substances in food however, sufficient in a high-calorie relation[5-11]. Only food substance the presence of that actively promotes fatty infiltration of liver.Yet not fully found out, what role is played by dietary factors in human pathology of hepatic illnesses.The task of our researches was to study the ultrastructure of liver at the combined influence of physical activity and valuable ration of feed with a different power value.

Materials and research methodology. The mature females of outbred white rat were used in an experiment, in an amount 18 things, three months age, with mass 160 g., identical age and size. Animals were contained in single cages and divided by three groups. Control the first group animals got ordinary feed mixture in food, second group low-calorised, vitaminized food, and the third group high calorised food. The dosed physical activity animals got through swimming in water of 18-20% in a flow 30 minutes.

For the electro-microscopic analysis pieces of liver fixed in 2,5% solution of gluteraldehyde with post-fixing in 1% solution of osmium tetroxide. Bioptates conducted on the generally accepted methodology and concluded in ethon.Semithin cuts were painted by mixture of methylene blue azur- 2 and basic fuksin. Ultra-thin cuts were prepared on the ultramicrotome of "Reicheyt", uronilacetate and nitrate of lead contrasted on Reynolds. Preparations were investigated on the electronic microscope.

Research results. The ultrastructure of liver of rats shows in a norm, that liver hepatocytes of rats had large kernels of the rounded or oval form with the wavy contours of nuclear shell (picture 1). Distribution of the condensed chromoplasm was premarginal on separate areas in a nucleoplasm.Karyonucleus is large, mainly granular structure. There were the single lipid including and lipofuscin granules. Space of Disse was filled by the numerous micrivillus of vascular surface of hepatocyte. Endothelia, covering the sinewaves of liver was presented by the layer of thin endothelial cages. The cages of Kupffer met rarely.

Electron-microscopic research of liver of rats after swimming showed the next ultrastructural changes related to certain physical activity. The nucleus of hepatocytes contained plenty of euchromatin. The condensed chromoplasm is distributed by the thin strake of premarginal (picture 2). The amount of nuclear pores increased. Long tubulis of granular cytoplasmic reticulum was situated in close connection with a nucleus and mitochondria. In area of large blade mitochondrias they possessed narrow road clearances (picture 2).

Thus, frequent - in a flow 30 minutes the conducted swimming at the temperature of water 18ºC resulted in the expressed compensatory-adaptive reactions of organoids, reflecting strengthening of albuminous and carbohydrate synthesis in a liver. The destructive changes of organoids as a result of overstrain were expressed not sharply.

Ultrastructure of liver of rats, being on an abundant high-calorie and balanced diet after 30 days of swimming showed that nucleus of hepatocytes had been by large with premarginal distribution of the condensed chromoplasm (picture3).

Electronically dense granules and wall outlets of granules of glycogen were evenly situated in a cytoplasm.Lipid drops are polymorphic on a size possessed more dense core and electronic- light rim. Thus, phenomena of fatty dystrophy of hepatocytes in liver saved.

At electron microscopic study of liver of rats, being on the low- calorie vitaminized diet in 30 days swimming it is found out that the nucleus of hepatocytes had the scalloped cut up contours of nuclear shell and premarginal distribution of the condensed chromoplasm (picture 4). Thus, in 30 days of swimming on a 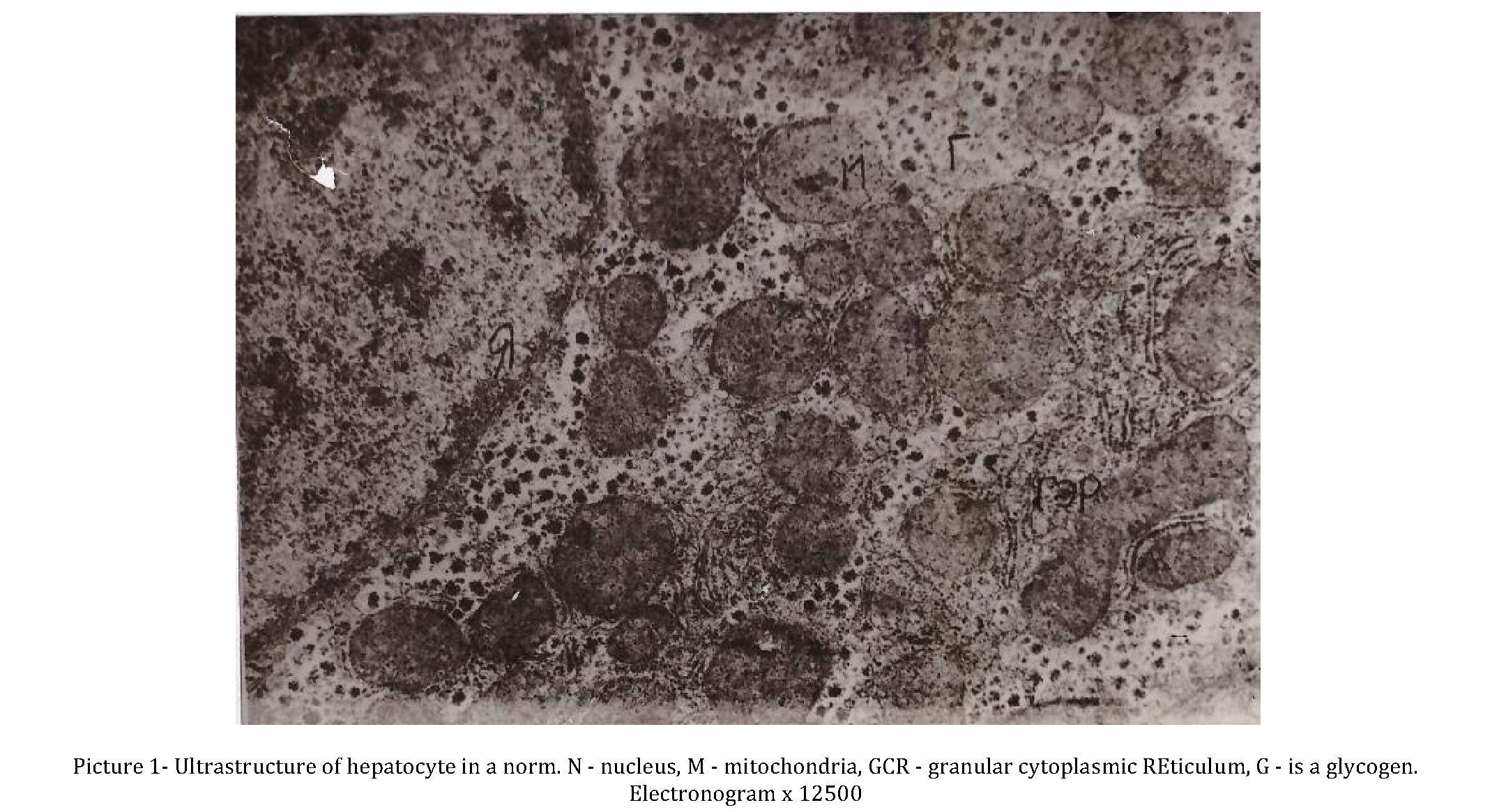 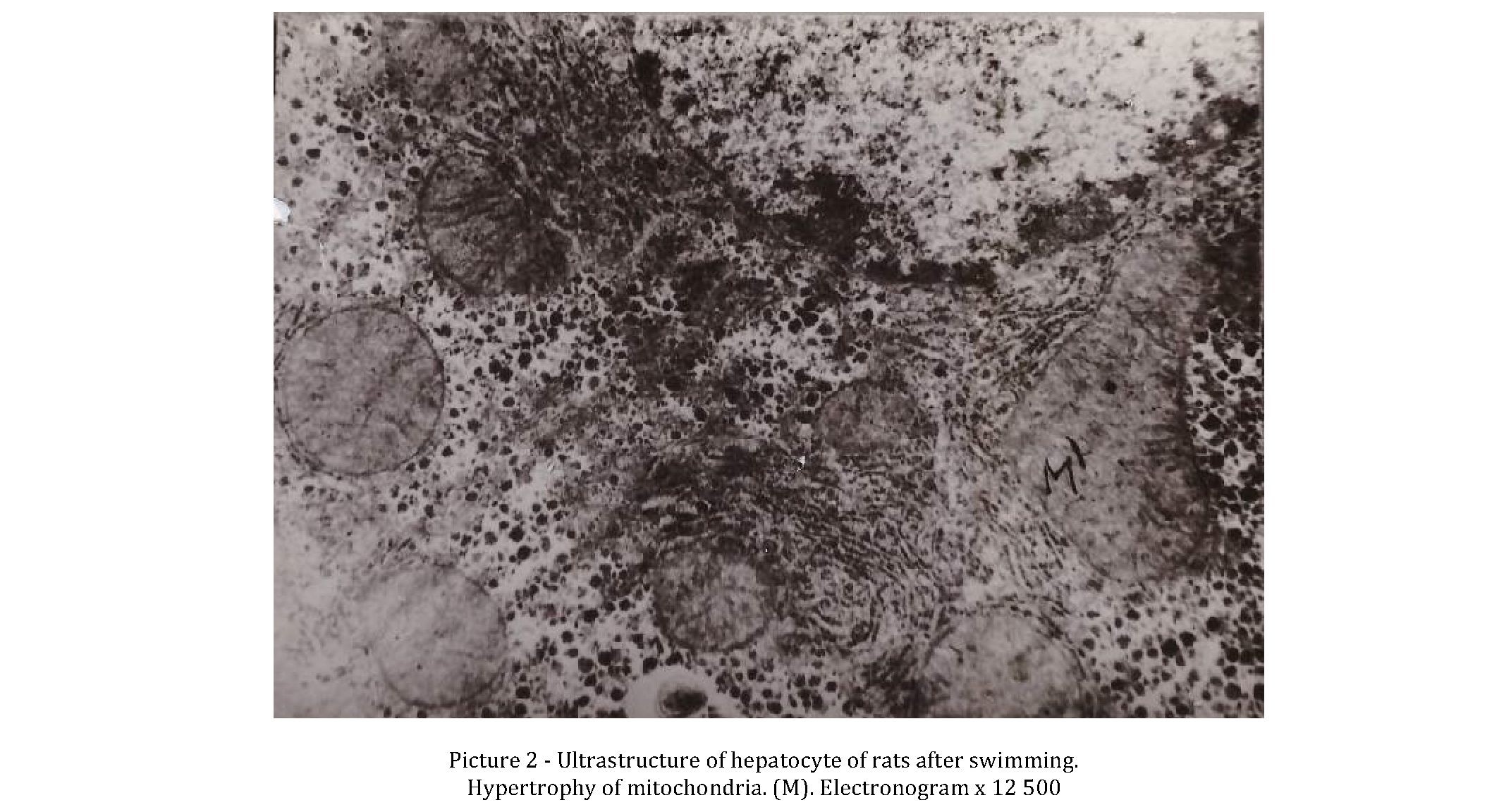 background this diet the brightly expressed compensatory- adaptive changes developed in hepatocytes, reflecting intensification of proteins and carbohydrate exchange. The signs of fatty dystrophy were absent.

Conclusion. Electron microscopy research educed the presence of the expressed fatty dystrophy of hepatocytes for rats in 30 days of swimming a feed high-calorific food resulted in predominance of processes of accumulation of fat. Lipid drops became denser. The preliminary feed of rats and swimming the low-caloric vitaminized food the phenomenon of fatty dystrophy of hepatocytes did not cause. Ultrastructural changes of 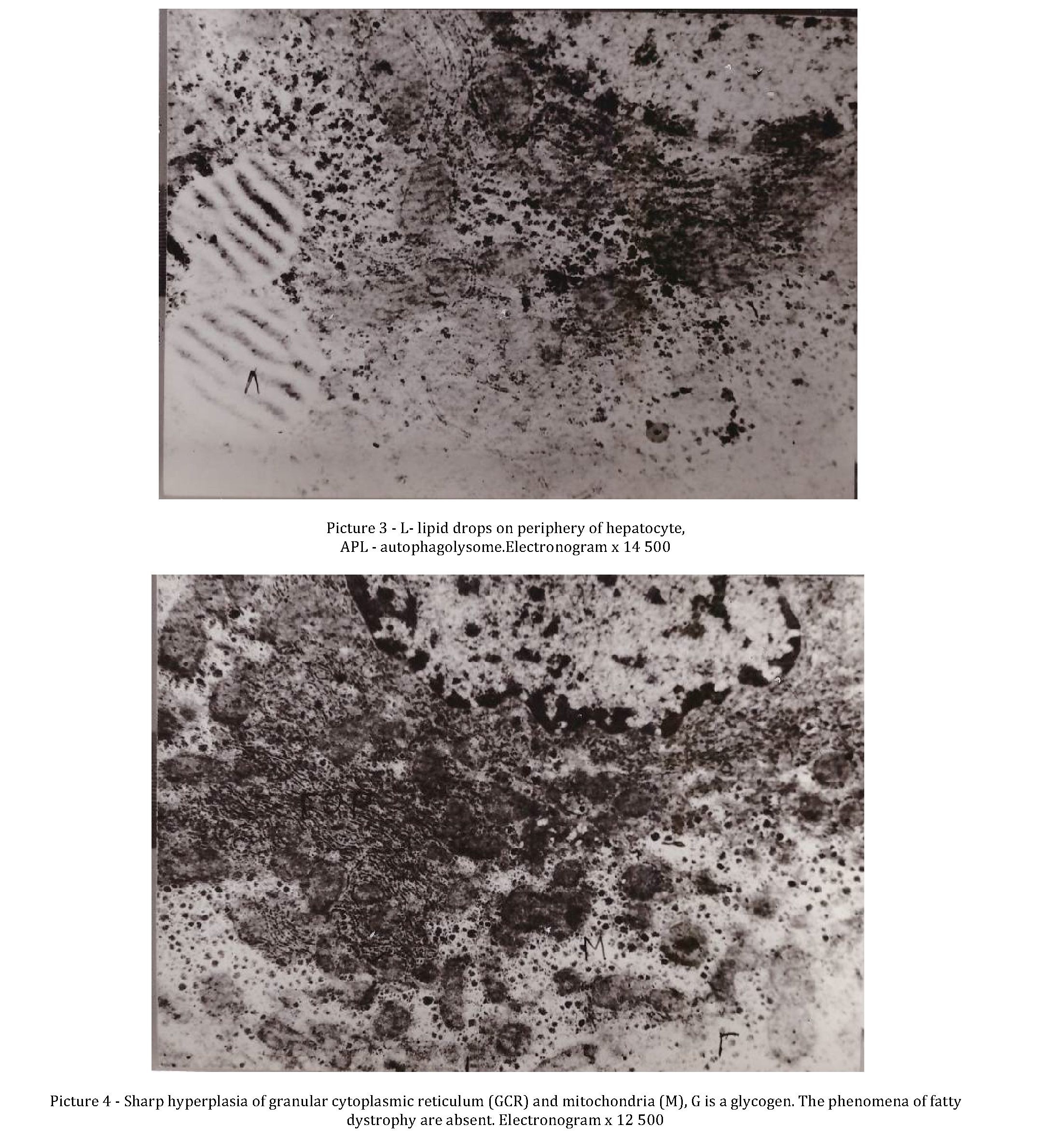