There are a number of species differences in the gross and histologic appearance of the spleen. In dogs the spleen is somewhat dumbbell shaped, while in most animals, it is more uniform along the longitudinal axis. The spleen in dogs is able to expand to store large numbers of erythrocytes, but it is also capable of rapid contraction (1). That is why the spleen gross appearance is quite variable, ranging from large in size and dark red to blue-black in color to smaller and lighter red. The capsule and trabeculae of dogs contains more smooth muscle (2).

The aim of this paper is to study regularities and species peculiarities of dogs spleen architecture and to develop diagnostics and treatment methods, very important for clinical morphology and veterinary surgery (3,4). This problem is also important for theoretical and clinical medicine, since a dog is vastly used as a laboratory animal in research studies, which can be applied in medical practice. Individual anatomical variability of a dog spleen as to its weight, size and shape is rather wide, what makes its shape classification difficult enough.

Sections of six adult mongrel dogs of both sexes were fixed in neutral formalin and embedded in paraffin. The sections were stained with azure-2 and eosin. Cross-section of the capsule and trabeculae was measured by the ocular micrometer, lens used with magnification ratio 20 and the ocular has a pitch of 10. The bulk density of fibroblasts and myoblasts in the capsule and trabeculae was studied a standard grid of LOMO microscope MBI-15.

Main structural and functional elements of the spleen are - support and contractile apparatus, represented by the capsule and trabecular system, and intertrabecular spaces, consisting mainly of reticulum

The capsule and trabeculae contain dense connective fibers and smooth muscle. In some cases the capsule has local irregular thickening due to elastic fibers garnetting. In the subcapsular area individual hemorrhage foci are noticed. The hemorrhage foci erythrocytes are round and diskshaped, some of the being lysed (leached). The trabeculae also contain dense fibrous connective and smooth muscle tissue. There are thickened areas in the trabeculae due to uneven proliferation of connective and muscle tissue.

Volume density (Vv) of myocytes dominates over fibroblasts Vv in both, the capsule and the trabeculae. See Table 2 below.

Most of lymphoid follicles are comprised of functionally and morphologically distinct compartments: periarteriolar B- zone , clear center with mantel zone and marginal zone. The periarteriolar zone is densely populated with small lymphocytes, macrophages and dendritic cells in between them. The lymphocytes of this zone have compact hyperchromatic nuclei with narrow cytoplasm.

Follicles are surrounded by the marginal zone, containing T- and B-lymphocytes and macrophages. It is suggested that one of the functions of the marginal zone is cooperative interaction of different cells in the immune response. In the result of such interaction the marginal zone B- lymphocytes , stimulated by a proper antigen, proliferate and differentiate into antibody-producing cells in total plasma cells and are accumulated in cords of the red pulp. Reticular fibers form the supporting network for the spleen follicles; at the thymus-independent area they are continuous radially and at the T-zone - along the long axis of the central artery.

According to Schmidt E.E.et al. (6), within the periarteriolar lymphoid sheath (PALS) in dogs there are very few capillaries different from rodents where the PALS have abundant capillaries. Also in dogs, as opposed to rats, capillaries are surrounded by a cluster of macrophages, so called ellipsoids or periarterial macrophage sheaths (PAMS) (7).

The major region of the spleen is filled with the red pulp, located between lymphoid follicles and the trabeculae, which is spaced among reticular meshwork and free cell elements, such as blood cells, plasma cells and macrophages.

The red pulp is abundantly rich with arterioles, capillaries and thin venous sinuses, which contain lymphocytes, macrophages and erythrocytes. Sinuses are mainly extended and filled with blood.

Species variation in the structure and morphology of the venous sinuses allows to classify spleens into two groups, sinusal spleens and nonsinusal spleens. In dogs the sinusal spleen is found. (8). The red pulp is abundantly rich with sinuses in the area adjacent to the marginal zone of lymphoid follicles, where numerous anastomoses are formed. The number of venous sinuses in dogs spleen is greater than that of other laboratory ruminants. In cavity of particularly broad sinuses there are lymphocytes, macrophages, leukocytes and erythrocytes. Such sinuses are called “working” sinuses, temporarily isolated from the bloodstream.

Conclusions: Thus, main species peculiarities of dogs spleen as opposed to human spleen and other laboratory animals are following:

1) the capsule and the trabeculae is much broader; 2) have a prevailing quantity of myocytes as opposed to fibroblasts quantity, both in the capsule and the trabelulae; 3) have a well expressed venous sinuses making numerous anastomoses; 4) dogs spleen have very few capillaries within PALS; 5) dogs spleen have abundant well expressed capillaries within PAMS. 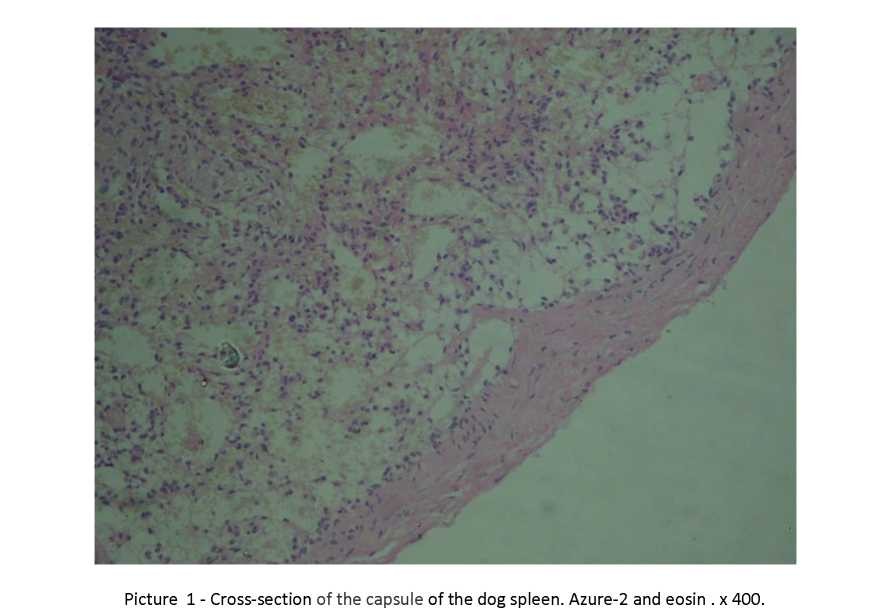