A marketing analysis of the kazakhstani pharmaceutical market of laxatives

On the basis of herbal preparations Senna (Kazakhstan), Senadexin (Ukraine), Alax(Poland) and Eucarbon (Austria) the sales figures for 2012-2016 have been analyzed in natural and monetary units and the main trends in the development of the market of drugs recommended for use to patients with impaired activity of the gastrointestinal tract, including with constipation, have been identified.

The growth of the population with diseases of the gastrointestinal tract is considered a problematic issue of the XXI century, which increasingly attracts the attention of scientists and practitioners of many countries of the world. Dynamic pace of modern life, irrational nutrition, bad health habits, increase in the number of causes of stress and etiological factors in the development of allergic diseases, irrational drug intake - that is an incomplete list of the driving factors that are recognized as the main causes of gastrointestinal diseases. More than half of the population (up to 75%) with varying frequency meets with a violation of the gastrointestinal tract, which manifests itself in a difficult or rare emptying of the intestine, that is, with constipation. Most often, this ailment is not an independent pathology, but indicates already existing diseases in the body [1, 2].

In addition to the adult population, children often suffer from constipation, so safe preparations with the possibility of use for children from the first year of life are increasingly in demand.

To treat functional disorders of the digestive system, which are manifested by constipation, laxatives are used [3, 4]. Laxative pharmacological properties are pronounced in a number of plants, for example, in rhubarb Tangut,alder buckthorn, common buckthorn, senna Alexandria, and aloe tree. This effect of the plant is determined by the leading group of biologically active substances - anthracene derivatives [3, 5, 6].

From the position of pharmacokinetics it is known that anthraquinones are practically not absorbed in the small intestine. Further transformations of compounds are interpreted as follows: in the large intestine under the influence of microorganisms sugar is cleaved from the anthraquinone molecule and restored to a free anthrone or anthranol, which are the active substances [5]. Anthraquinones exert their effect directly in the large intestine (they practically do not affect the secretion and peristalsis of the stomach and small intestine), causing the electrolytes and water to escape into the intestinal lumen, while the passage of stools is reduced and their liquefaction is observed [7, 8].

The purpose of the work was to conduct a marketing analysis of the Kazakhstani pharmaceutical market of laxatives.

At this stage of the study we conducted a more detailed analysisof the domestic pharmaceutical market of laxatives with АТСof А06Аclassification for years 2012-2016.

The structure of the market of laxative preparations by manufacturers registered in Kazakhstan for 2012-2016 was analyzed. (Table 1) [9, 10].

The overall ratio of foreign and Kazakhstani producers of this group of drugsis shown in Figures 1-5.

Imported preparations of this segment in the largest number are supplied from India, Ukraine, Czech Republic and France throughout the analyzed period. The number of drugs from other countries is small.

Analysis of laxative preparations of domestic production shows that the share of preparations of plant origin is greater than that of synthetic ones (Fig. 7). Among domestic laxatives the share of phytopreparations in 2012 was 69%, in 2013 and 2014 - 67%, in 2015 and 2016 - 73%. Most likely, this is explained by the fact that Kazakhstani producers of synthetic drugs are dependent on the raw material component of production. Local producers have to buy raw materials for the production of drugs abroad, which makes the pharmaceutical industry dependent. With regard to the production of herbal products, Kazakhstan has a sufficient raw material base that needs to be developed, as well as to maximize its potential as part of the development of domestic production. 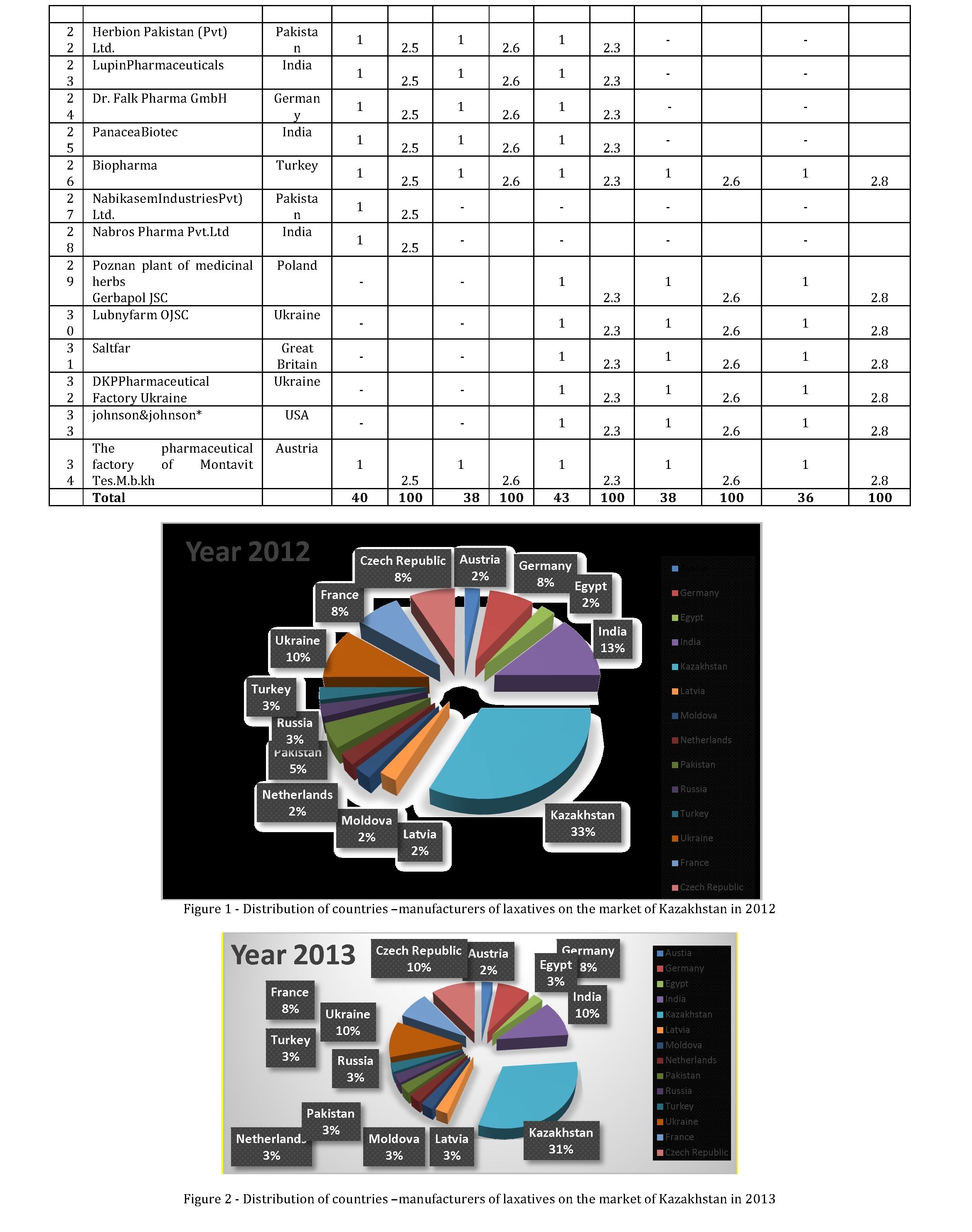 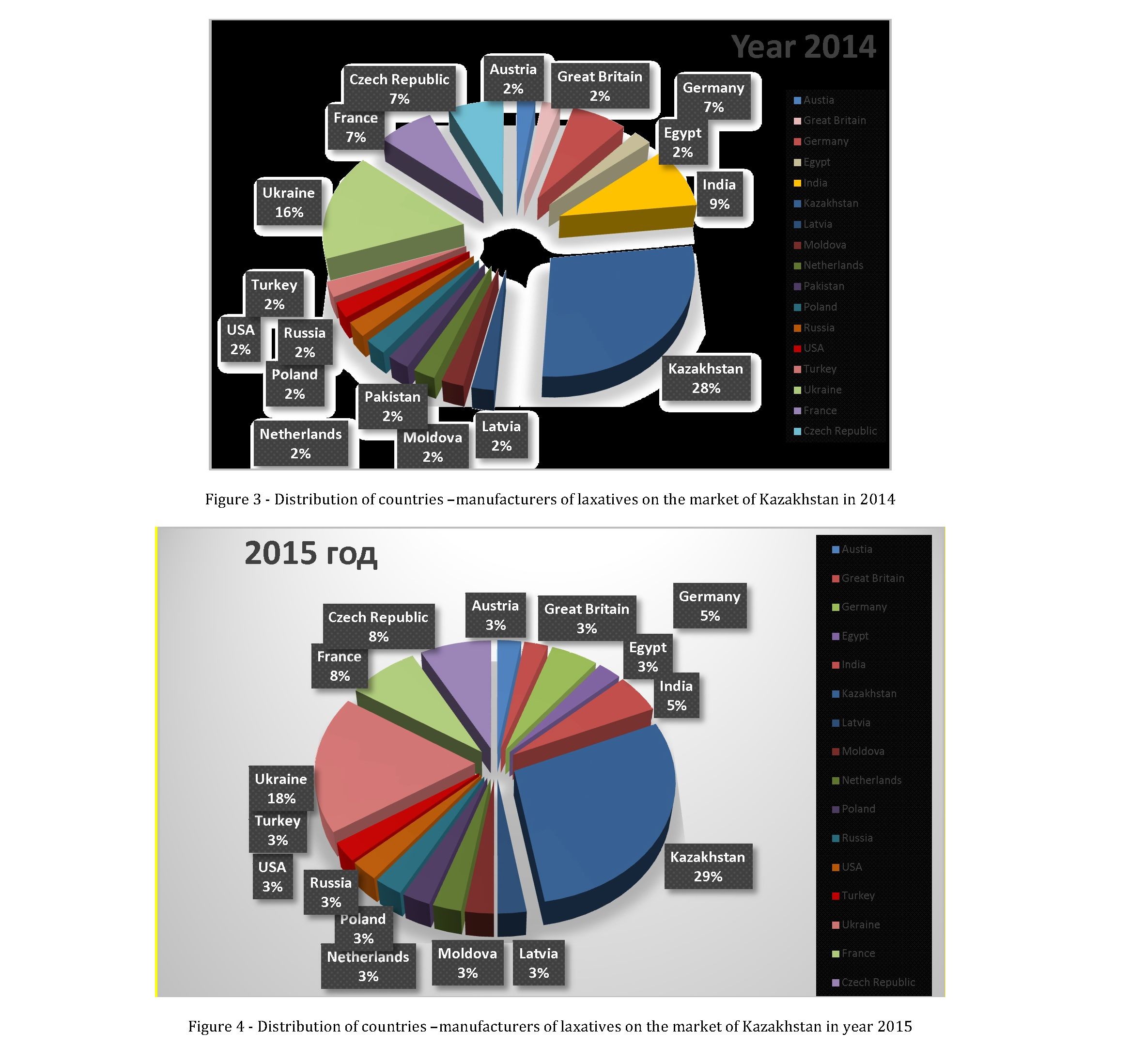 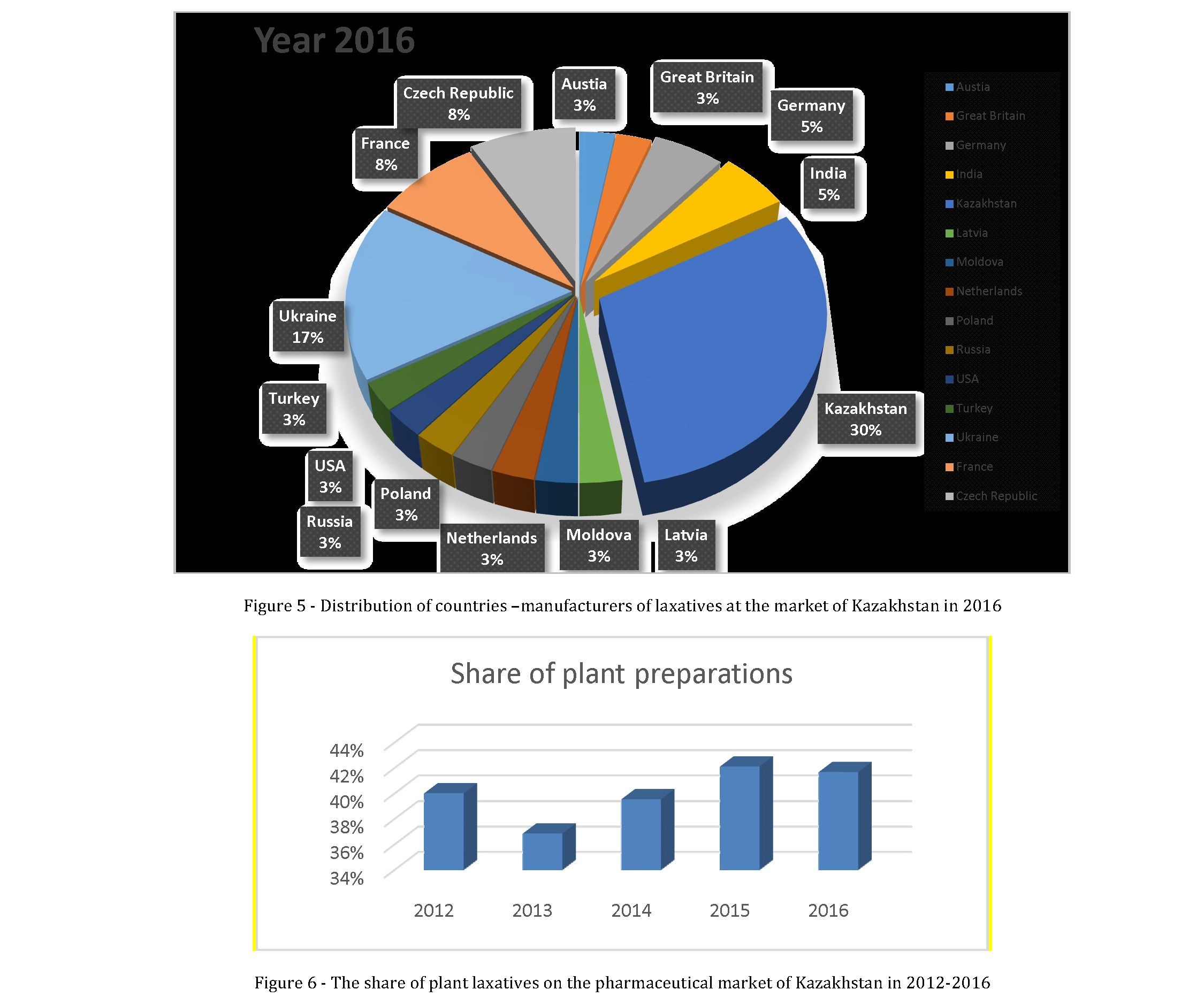 The analysis of the structure of domestic plant laxatives showed that Kazakhstani products are represented by 5 manufacturers for the entire analyzed period (Table 3).

When analyzing the assortment of domestic plant laxatives by sources of production it was noted that the senna leaves are among the most popular. Single positions are taken by the raw materials of the buckthorn bark. There are no domestic laxatives based on raw rhubarb. The only preparation based on raw rhubarb in combination with other medicinal plant raw materials present at the market is the preparation of "Eucarbon" in the form of tablets manufactured by Austria.

In order to determine the peculiarities and tendencies of consumption of plant laxatives by the population of Kazakhstan we have analyzed the sales figures of 4 plant products: Senna (Kazakhstan), Senadexin (Ukraine), Alax (Poland) and Eucarbon (Austria) - for years 2012-2016 in natural and monetary units. So, the demand for Senna, Alax, Eucarbon preparations in natural terms is growing every year (Figure 8). As far as the demand for Senadexin is concerned, it increased significantly in 2015 compared with year 2014 - the increase (in) for this period was 639 %, and in 2016 the demand slightly decreased. 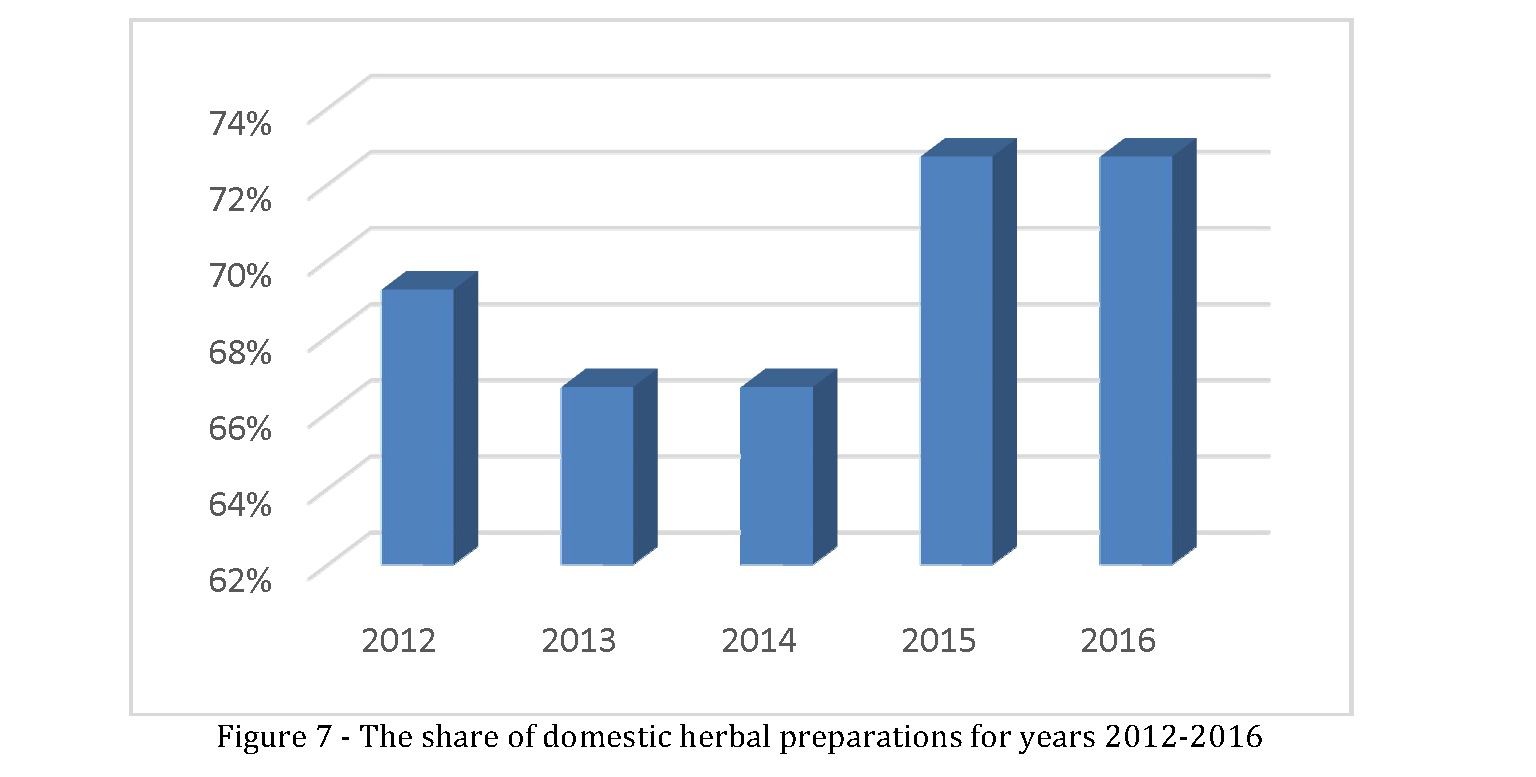 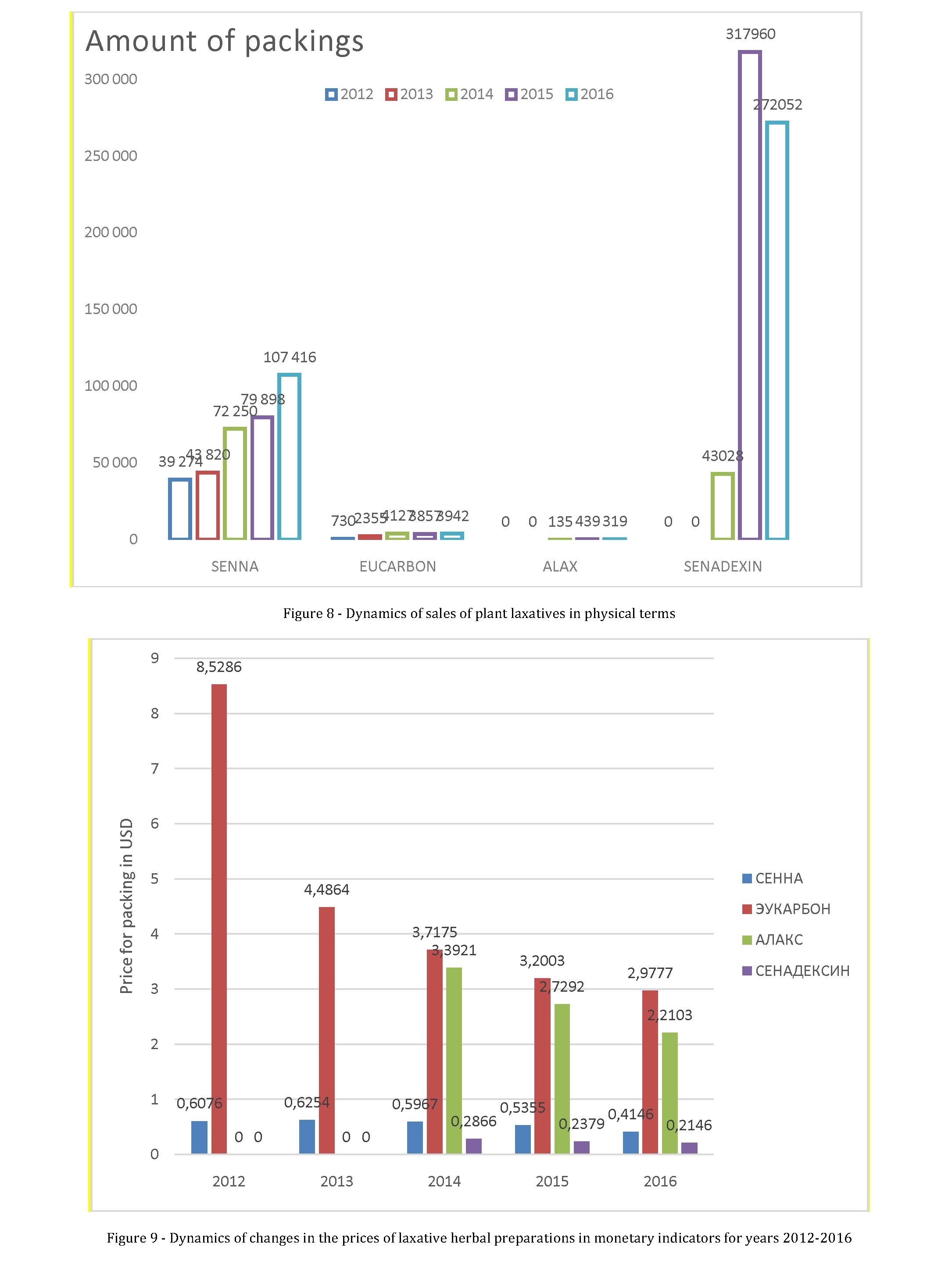 A comparative analysis of the sales of 4 plant products: Senna (Kazakhstan), Senadexin (Ukraine), Alax (Poland) and Eucarbon (Austria) - for years 2012-2016 indicates an increase in sales volumes in both natural and monetary terms. This confirms the growing need for laxative preparations of plant origin for the analyzed period.

So, due to the availability in Kazakhstan of a sufficient raw material base of wild medicinal plants the development of the market of laxative preparations of plant origin is topical and promising.