Brachydactyly (BD) refers to the shortening of the hands, feet or both, and it has a clinical spectrum ranging from minor digital hypoplasia to complete aplasia. The index and small fingers are the most commonly affected digits, and the middle phalanx is the most commonly affected bone. It is inherited in autosomal dominant manner and has reduced penetrance and variable expressivity. The various types of isolated brachydactyly are rare, except for types A3 and D. Brachydactyly can occur either as an isolated malformation or as a part of a complex malformation syndrome. The nature of genetic counseling will depend on the pattern of inheritance of the type of brachydactyly present in the family and on the presence or absence of accompanying symptoms. Thus this review, summarizes the physical and molecular details about different types of brachydactyly and aims to serve as a collective review as a reference to refer.

Brachydactyly is a general term characterized by disproportionately short fingers and toes. It can occur as an isolated finding or as part of a complex syndrome. Many different types of brachydactyly have been identified. Some result in short stature and others are associated with other hand malformations, such as syndactyly, polydactyly, or reduction defects. The index and small fingers are the most commonly affected digits, and the middle phalanx is the most commonly affected bone. Presentation of brachydactyly is highly variable — a digit may be just slightly shorter because of reduced growth of one phalanx or the metacarpal, or there may be complete absence of one or more phalanges, or there may be complete aplasia of the digit or multiple digits.

The underlying genetic cause of most isolated forms of brachydactyly and many of the syndromic forms has been identified. Many of the isolated forms are inherited in an autosomal dominant manner with variable expressivity and reduced penetrance and in most cases does not present any problems for the person who has it. Treatment depends on the specific type of brachydactyly, but may include plastic surgery, physical therapy and/or ergotherapy.

There are different types of brachydactyly, based on which bones are shortened. This condition can also be a symptom of other genetic disorders. The various types of isolated brachydactyly are rare, except for types A3 and D, which are common, prevalence being around 2% (1) . A search of Online Mendelian Inheritance in Man (4) using brachydactyly as key term provided 232 entries (isolated forms; syndromes with brachydactyly; skeletal dysplasias). A similar search using brachydactyly as search term in the London Medical Databases (LMD) (5) yielded 386 entities. The incidence and prevalence of these entries varied considerably.Brachydactyly can occur either as an isolated malformation or as a part of a complex malformation syndrome. To date, many different forms of brachydactyly have been identified. Some forms also result in short stature. In isolated brachydactyly, subtle changes elsewhere may be present. Brachydactyly may also be accompanied by other hand malformations, such as syndactyly, polydactyly, reduction defects, or symphalangism. One of the most commonly used classifications of brachydactyly based on anatomic grounds was provided by Bell (6) and further elaborated by Temtamy & McKusick (1). The types of branchydactyly is summarized in the table below by Temtamy et al, 2008 (2).

Unless there is an accompanying disorder that produces symptoms, or the shortened digits impair the use of hands and feet, there is no treatment needed for brachydactyly. I will briefly summarize several types of branchydactyly and their properties below.

The different types of brachydactyly are categorized by the bones and digits affected.

Type A brachydactyly is the shortening of the middle phalanges. These are the finger bones that are the second from the end of each digit. Type A is further classified by finger types. These are as follows:

Type A1: The middle phalanges of all the fingers are shortened.

Type A2: The index finger and sometimes the little finger are shortened.

Type A3: Only the little finger is shortened.

Type B brachydactyly affects the ends of the index through little fingers. The last bone on each finger is shortened or completely missing. The nails are also absent. The same occurs in the toes. The thumb bones are always intact but often flattened and/or split.

Type C is rare and affects the index, middle, and little fingers. The middle phalanges, as in type A, are shortened, but the ring finger is often not affected and is the longest finger on the hand.

Type D brachydactyly is considered to be common and affects only the thumbs. The end bones of the thumbs are shortened but all the fingers are normal.

Type E brachydactyly is a rare form if it is not accompanied by another disorder. It is characterized by shortened metacarpals and metatarsals. These are the bones in the hands and feet that are third and fourth from the end of the digits. The result is small hands or feet.

The hand phenotype in isolated forms of brachydactyly allows identification of 11 types, with minimal degrees of phenotypic overlap. Typically, they show an autosomal dominant pattern of inheritance with variable expression and penetrance.The number of syndromic forms of brachydactyly is extensive, and, dictated by current expertise.

Molecular dysmorphology studies the abnormal function of molecules leading to disturbed and impaired development. Molecular analysis of isolated forms of brachydactyly has allowed investigation of the role of certain genes in normal human skeletogenesis and limb formation. For instance, the gene BMPR1B mutation results in cartilage malformation and it is transmitted in a dominant negative manner. The HOXD13 gene mutation results in wide spectrum of limp disorders including branchydactyly (7). CDMP1 gene mutations with loss of function were found in certain types of isolated brachydactyly (8). These genes can be concluded to collectively affect the size and shape of individual bones or group of hand and foot bones. Despite of many finding those shed light on to the field, many further studies are needed to unravel other underlying mechanisms of fine tuning of distal skeletal structures. 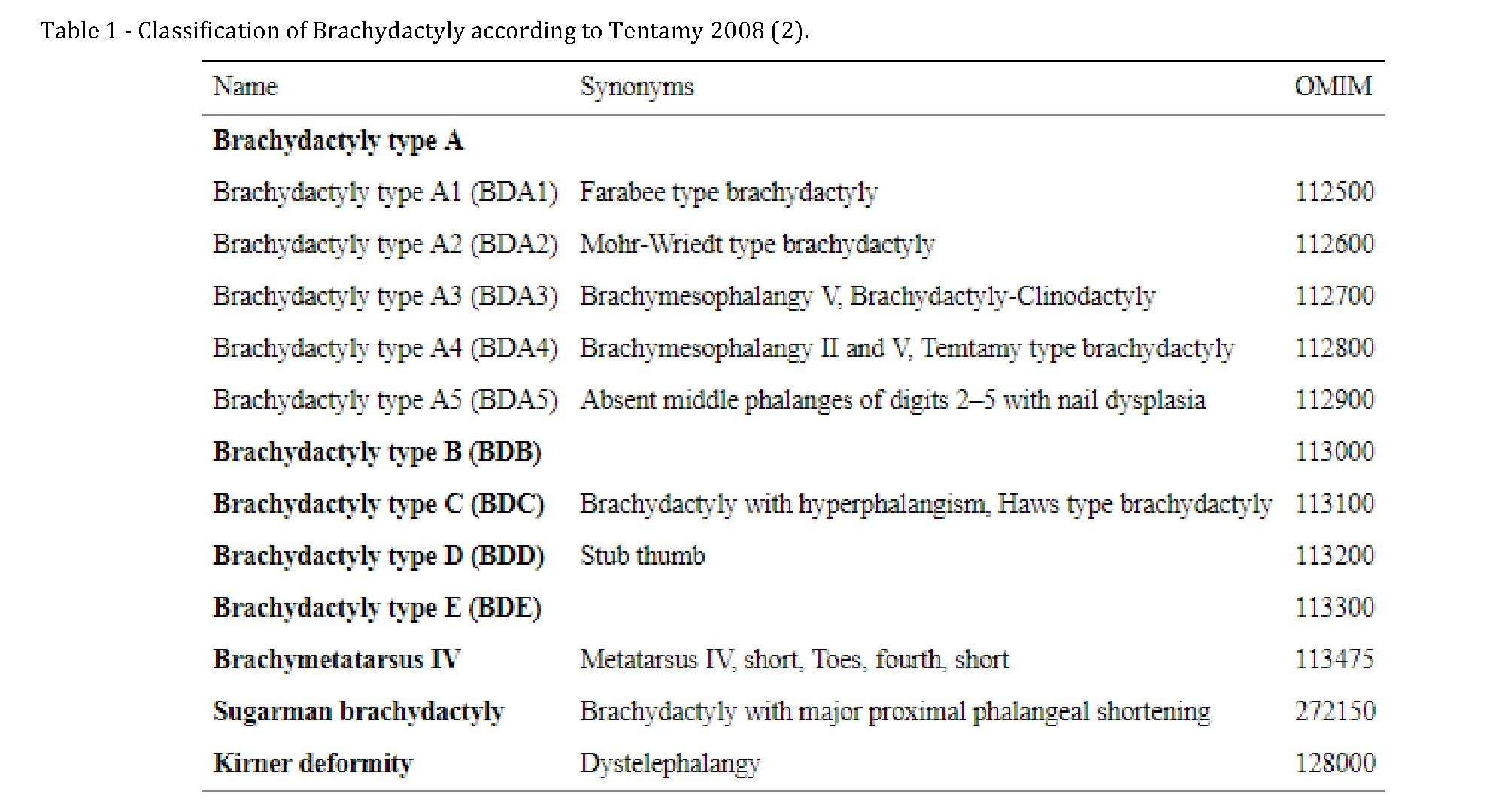