In article possibility of use of elements of analog elements in digital computing systems is considered. As an example the operational amplifier as the differentiating device is taken. The corresponding calculations are given.

An alternative of global complex object programming was the use of computer hardware or software environment for modeling systems of mathematical equations and relations. Integration is one of the basic mathematical operation and its implementation is the construction of an circuit, in which the change rate of the output voltage is proportional to the input signal. In the graphical interpretation, output voltage is proportional to the under curve area of the input voltage. Those or other kinds of integrators occur in many analog systems.

The background of analog computers. The name is an abbreviation of the word "non-linear model". They have been designed to solve the Cauchy problem for ordinary differential equations. The most perfect representative of machines of this series was a machine "MN-18" - average powered AVM, designed to solve with the methods of complex mathematical modeling of dynamic systems, described as differential equations up to the tenth level in the part of analog-digital computing system [1]. Management scheme allows us to produce same time and divide running of integrators to groups, also tasks can be solved once or with repeat.

In analog computers (AVM) all mathematical values are represented as continuous values of some physical quantities. Analog electronic computers are based on the physical characteristics of the task and of their components as well. This is usually done by the inclusion-exclusion of certain elements of the chains which are connected with wires, and by changing parameters of variable resistors, capacitances and inductances in chains.

Mainly electrical circuit acts as variable voltage. Their changes are taking place under the same conditions as the specified functions changes. The method of mathematical modeling (model of the object is created) are used in these machines. The results of solutions are displayed in the form of voltage dependencies in the time function on the screen of the oscilloscope or fixed with measuring instruments. The main purpose of the AVM is the solution of linear and differential equations.

Let's try to combine the advantages of analog computers for using in digital systems. We consider the example of an analog block differentiator utilization, on the basis of the operational amplifier in digital computing [2], for which the input and output the DAC and ADC is used (Figure 1).

Sinusoidal basis functions (or rather, complex exponent) are private functions of differentiation, which means that the given representation transforms linear differential equations with constant coefficients to usual algebraic. (For example, in a linear stationary system frequency - a conservative value, so the behavior at each frequency can be solved independently.)

The operation scheme of differentiation is obtained from the general scheme 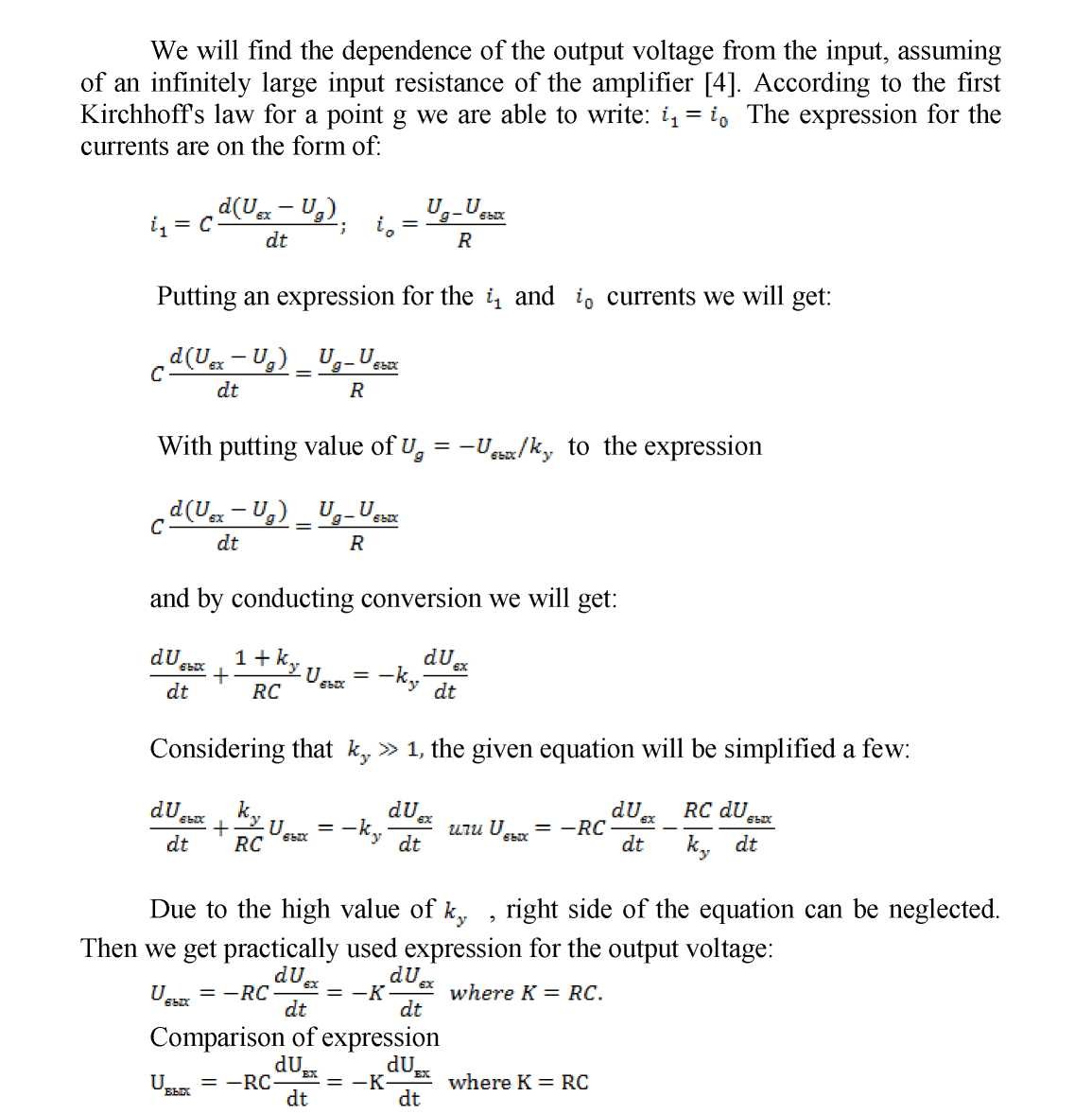 help of resistor, which is connected frequently with capacity. In this case, the circuit will operate as a differentiator to the frequency, determined by the expression F = 1 / 2pRC. Differentiating device that uses an amplifier with negative feedback , allows us to differentiate arbitrary, rapidly changing functions with sufficient accuracy. Variations in the amplification factor K, mostly does not substantially affect to the accuracy of differentiation.

After considering methods for calculating frequency -selective circuits, as an example of calculating of differentiator, becomes clear that it is possible to design a differentiator, which would give a signal close to the ideal mathematical derivative. All of the above, indicates that an operational amplifier can be used effectively in digital equipment as a differentiating device.