Behavior based intrusion detection technologies are increasingly popular. Traditionally behavior patterns are expressed as specific signatures defined in the system call domain. This approach has various drawbacks and is vulnerable to possible obfuscations.

By its nature the described approach is signature-based. The CPN technology is the backbone of the described approach: CPNs are used to define the functionalities of interests as behavior signatures, and at the same time serve as the mechanism for the signature detection. The paper describes a unique generalpurpose software tool implementing CPN. It constitutes the enabling technology for the described IDS approach, and has many additional applications for modeling and monitoring complex hierarchical systems of discrete events.

Modern malware uses increasingly advanced schemes to avoid detection. Nowadays some malware is crafted for one time use against high value targets [1]. This type of malware is very hard to detect since it employs advanced mimicry and hiding techniques. In addition, it often incorporates insider knowledge in order to hide and spread efficiently. The attack usually evolves slowly over time with a small footprint making it even harder to notice using statistical methods [2].

In the domain of behavioral intrusion detection systems (IDS), most notable recent efforts are [4, 5, 6, 7]. However, their general weakness stems from the lack of clear and easy to understand technology for the specification and detection of malicious operations. Additional drawbacks result from the limited monitoring time window and wasted system resources for tracking repeated operations (Read/Write operations, virtual memory operations, etc.) making them vulnerable to DoS attacks. Behavior based intrusion detection systems utilizing Colored Petri nets as a tracking mechanism do not have such drawbacks. They can monitor large volumes of operations over a long period of time. This renders slow or high volume attacks impractical.

Colored Petri nets (CPN) are a backward compatible extension of Petri Nets [8]. A CPN consists of places, transitions and arcs. Each place may contain a dynamically varying number of tokens. Each token in turn may contain an attached data value called token color. The data value can have any complex structure (in some cases even another CPN). All tokens belonging to a particular place must have colors corresponding to the type of the place. This type is also called a color set of the place.

One of the most useful properties of Petri Nets is that they have intuitive visual representation. Places are represented by circles or ovals, transitions by rectangles, and tokens by dots in the places. Each place, transition or arc can carry a rich set of inscriptions. It makes the task of creating and understanding a CPN much easier. In spite of the simplicity, Colored Petri Nets constitute a very powerful tool. CPNs have found a lot of applications in industrial engineering [9], military planning [10] and software engineering [11], [12]. In addition to the applications mentioned above, Colored Petri Nets provide an efficient framework for building event detection systems. The inherent parallelism of CPNs perfectly matches the real world environments when most events occur in parallel.

To illustrate some of the basic concepts of a CPN consider the CPN in Figure 1. There are three places (Sensitive Data Accessed, Communication Requested, Leak) and one transition (the transition guard expression compares process IDs). The color set of the place "Sensitive Data Accessed" is positive integers. The color sets of the places "Communication Requested" and "Leak" are products of sets of positive integers and strings.

The distribution of tokens over the places is called marking. For the marking presented in Figure 1 the transition is enabled by tokens with PID=3. This means that transition may occur and move the CPN into the next marking by removing tokens with PID=3 from places "Sensitive Data Accessed" and "Communication Requested" followed by placing of a token into the "Leak" place (see Figure 2). In the resulting marking the CPN has tokens in places "Communication Requested" and "Leak". 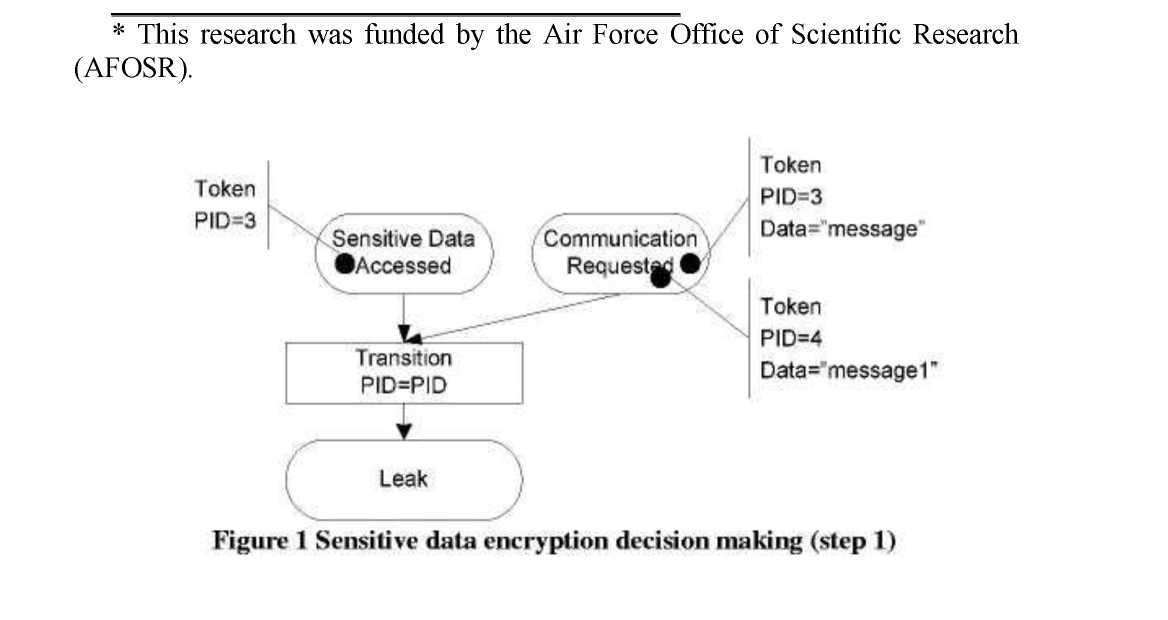 In the resulting state the token residing in the "Leak" place reflects the following facts:

This constitutes a complex event which by itself means more than a mere combination of events it consists of. This event indicates the possibility of sensitive data leak from the system. Therefore, the CPN can serve as an event detection system capable of bridging the semantic gap between the low level and high level perceptions of the same abstract process. The "Communication Requested" or "Sensitive Data Accessed" places could receive tokens from other parts of a larger CPN making "Leak" a complex hierarchical event composed of several simpler events (see Figure 3)

CPNs can assemble such hierarchical events very efficiently from the viewpoint of memory requirements and processing. Storing a token does not take up much memory space. Computation of guard and arc expressions is strictly local (involves only neighboring nodes). Therefore it can be done in parallel on modern multicore CPUs. In addition, the detection workload can be easily distributed among a number of disjoint CPNs placed in the network hosts. 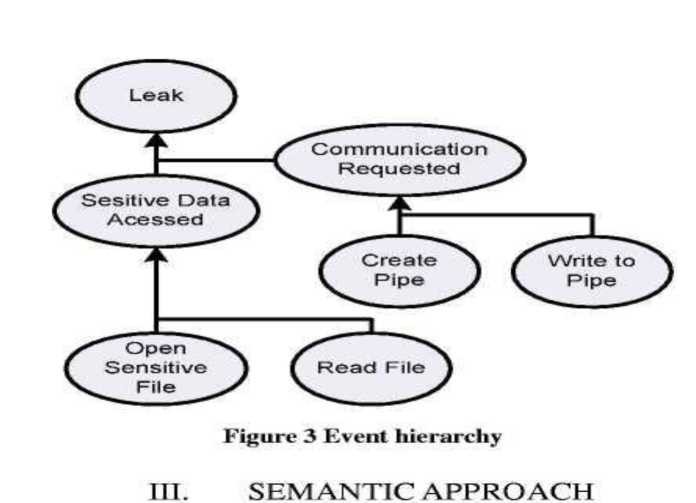 The main goal of behavior based IDS is to identify and report malicious operations over the resources of the system. This might include but is not limited to self-distribution without user's consent, information leaking (which can be legitimate for some authorized programs), malicious file hosting (which can be legitimate depending on the environment), etc. As one may see it is hard to define and even harder to detect malicious behavior. The novel IDS approach we proposed [13] does not classify program behavior as malicious or benign. The detection of malicious behavior is replaced by the detection of specific functionalities (behavioral patterns) and later tagging some functionalities or sets of functionalities as malicious in the current environment.

The functionality can be understood as a set of operations achieving tangible results in the program's environment. In most cases in order to change the environment or communicate with the outside world the program issues system calls to an operating system (see Figure 4). Therefore system call monitoring is the ideal place for tracing program behavior. System call monitoring provides a reliable and in many cases incorruptible source of raw behavior-carrying data for the functionality recognition.

programmers. Therefore the semantic gap exists between the functionality level of the program and its system call level implementation.

We suggest a natural language analogy as pictured in Figure 5. Sentences carrying the essence of what the speaker meant to say correspond to functionalities, words correspond to APIs and letters correspond to system calls. It is easy to see how the semantics are being lost along the path from sentences to letters. The famous sentence is barely recognizable behind the set of letters presented at the left column.

To bridge the gap between the low level and high level view of the system a mechanism capable of detecting hierarchical events with multiple links is needed. The appropriate candidate for this type of effort is the Colored Petri Net. As it was pointed out in the previous section, CPNs can efficiently assemble complex events from the stream of low level events.

75 the Colored Petri Net specifications by the use of the AD-to-CPN compiler which is currently being developed by the authors.

The AD specification provided by an expert does not always cover every possible implementation of the functionality in question. This peculiarity can be exploited by an attacker. An attacker may create an obfuscation tool capable of modifying malware to implement/execute certain operations in a different way each time it is used.

In order to make the development of automatic obfuscation engines problematic, an AD-to-CPN compiler automatically generalizes the specification provided by an expert. The generalization process detects operations over OS objects (files, IPC, registry, processes) in the activity diagram specified by an expert. Then it generalizes the activity diagram undermining a list of imaginable (as of now) obfuscations. The list of detectable obfuscations includes: partitioning of the operation among several processes; renaming, moving, copying of the resources and indirect access to the resources (symbolic/hard links, reparse points, handle duplication). The same anti-obfuscation process can be applied to CPN signatures effectively by application of hierarchical CPNs and relaxing constraints on intraprocess monitoring.

The resulting CPN specification is able to detect the original functionality defined by an expert and the much richer set of obfuscated functionalities. As a result the process of creation of new malware becomes harder to automate which in turn results in substantially increased development costs for cybercriminals. 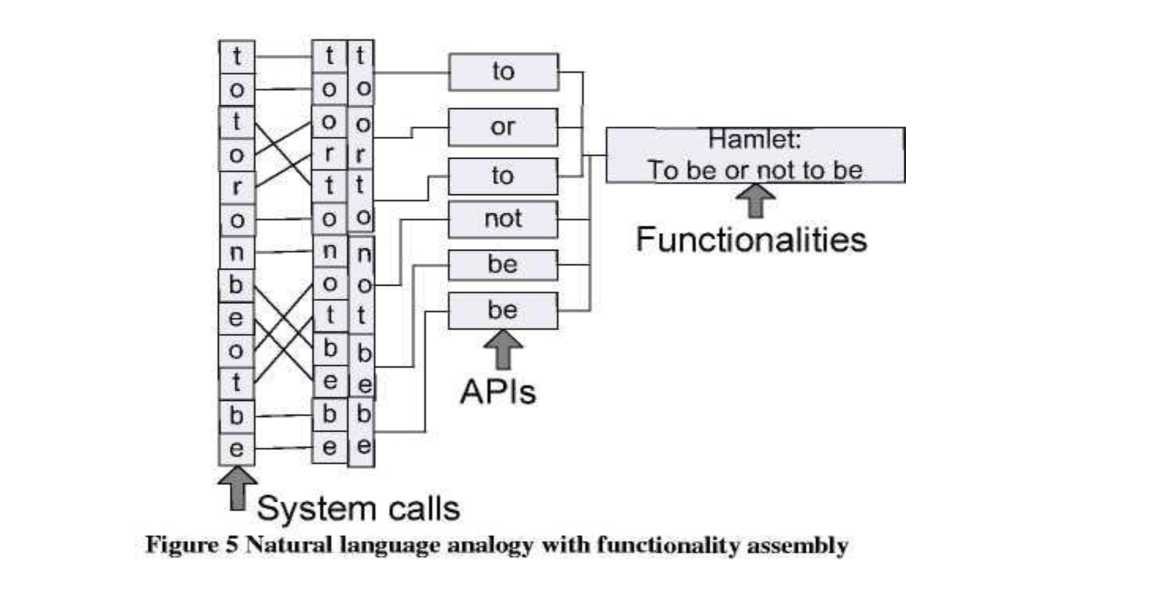 The functionality specified in CPN format can be detected by the direct simulation of the corresponding CPN utilizing input events coming from the system call monitor.

The mechanics of the functionality recognition can be fully demonstrated by a simple enough example of the detection of the "drop & execute" functionality. The CPN based signature capable of detecting this functionality is featured in Figure 7. Note that this CPN signature does not feature antiobfuscation schematics or cleanup schematics for the clarity of presentation.

Assume that initially the program executes the following sequence of system calls:

It will result in the marking of the CPN presented in Figure 7.

leads to firing one token to the WriteRemeber place by transition T2. All remaining tokens are removed and discarded

The completion of the CreateProcess ("tmp.exe") functionality results in the occurrence of transition T4 which in turn fires a token into the place RunningDroppedFile (see Figure 9). 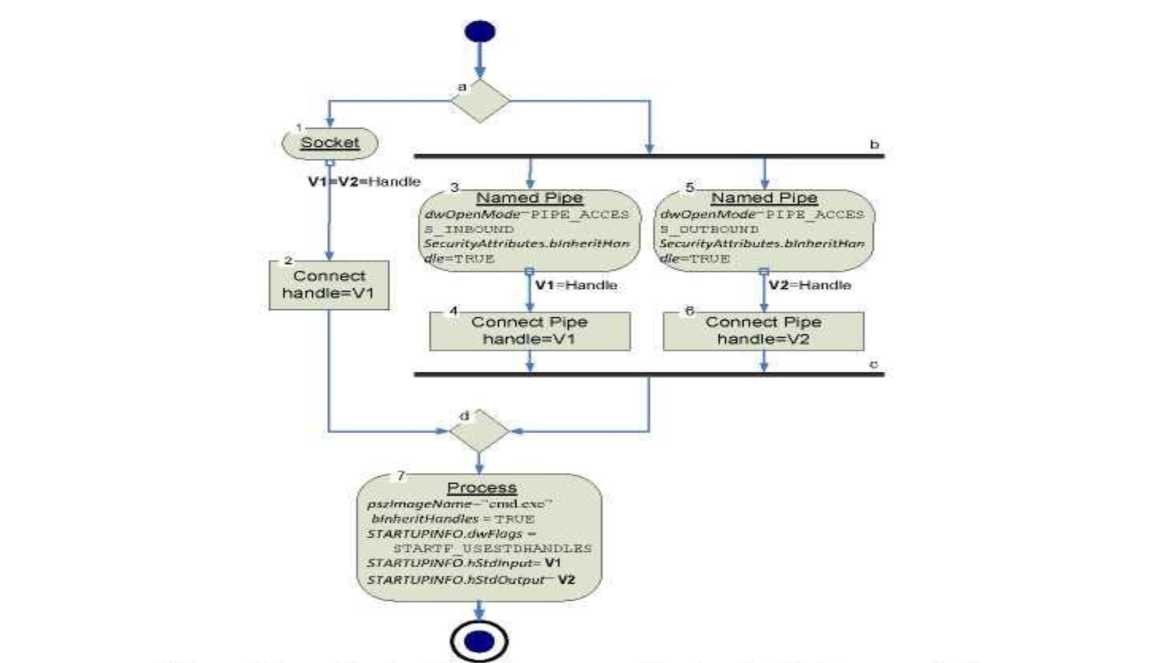 As it was noted in paragraph II, a token can be made to carry all event assembly information along. For the token arriving at the RunningDroppedFile place, the back trace featured in Figure 10 can be obtained. This back trace was generated by the APIMon monitoring software developed by authors of this paper. 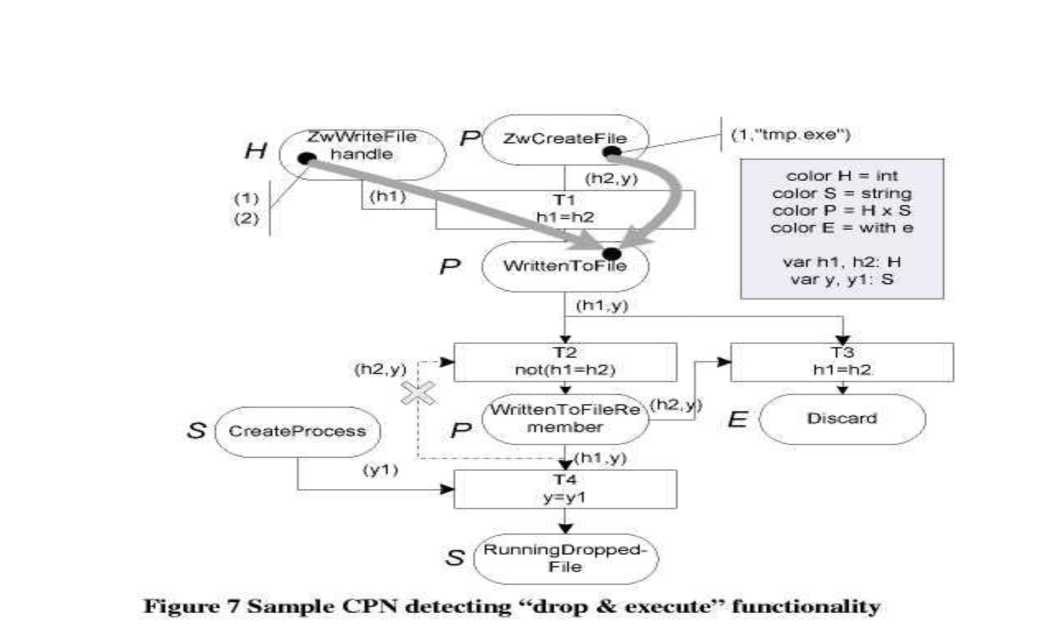 The ability of CPNs to assemble complex events from more simple ones turns out to be very useful in the event of a security breach. High level events observed by the CPN allow the security researcher to operate with more meaningful information than before. It results in increased productivity and efficiency. 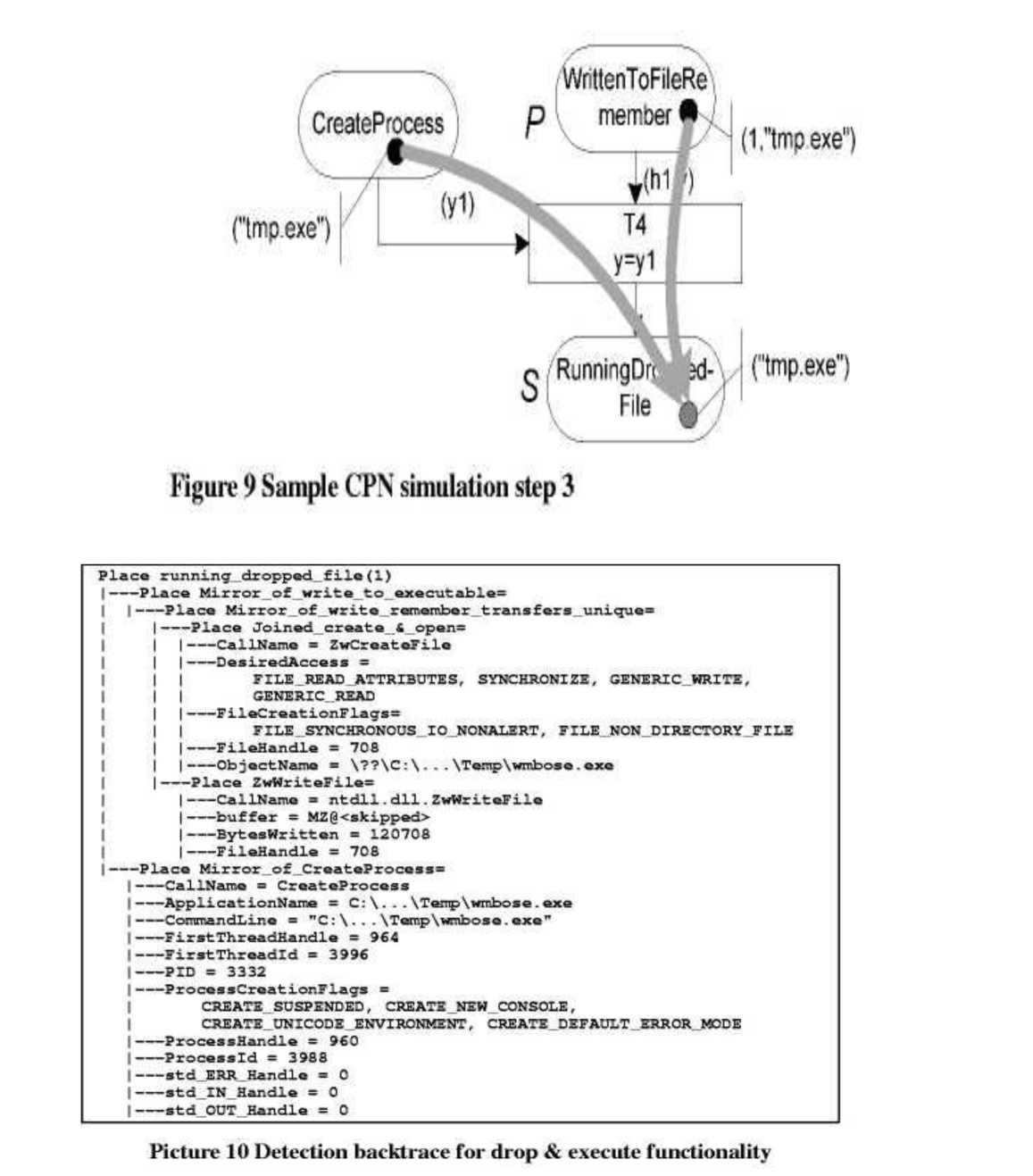 The detection of functionalities can be done straight from the system calls using one large CPN. It allows for sharing parts of the CPN structure between different functionalities. It may seem beneficial since it might help to reduce the overall number of CPN nodes. Unfortunately it also makes it difficult to understand and debug the results.

A much more scalable approach is to perform the detection in relatively independent CPNs in a number of separate stages. The APIMon monitoring software does it in correspondence to the multilayer structure of commodity software. At each layer some part of the semantic gap between the low level 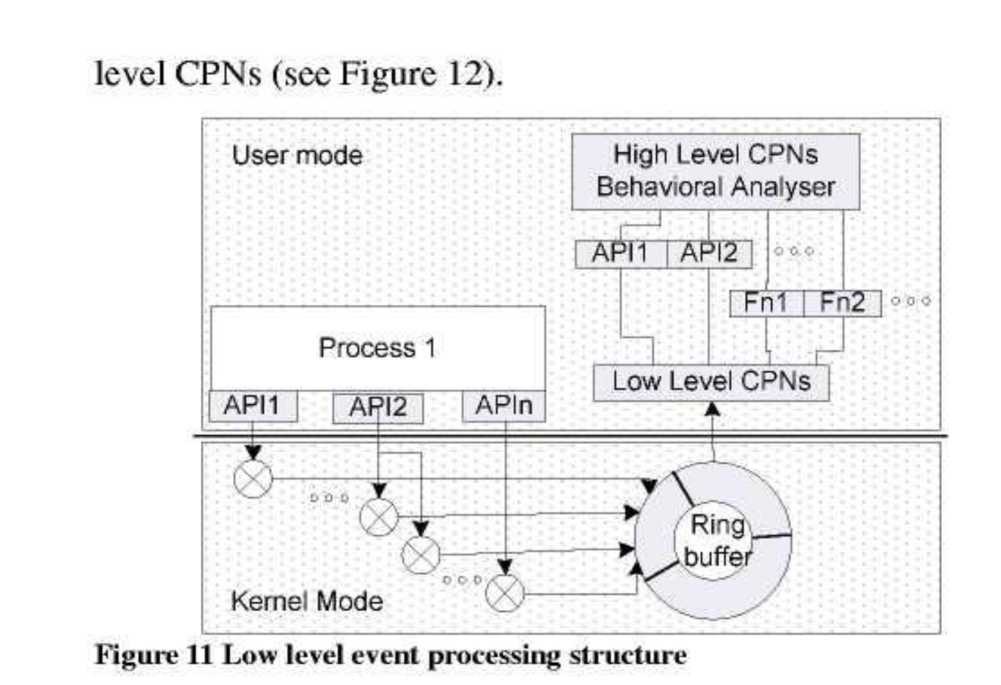 At the first layer system calls are intercepted and sent to high performance low level CPNs (see Figure 11). The main function of low level CPNs is to reliably rebuild API calls from the stream of system calls. The CPNs at this level are hard coded in C++ for efficient processing. After that stage, recognized API calls are sent for further analysis to the high

High level CPNs are able to perform arbitrary complex functionality recognition. Anti-obfuscation techniques can be applied at this level. High level CPNs are executed within a configurable CPN engine. It is implemented in C#. It abstracts all internal semantics of Petri Nets simulation and gives the CPN developer an opportunity to effectively express behavior of programs in his subject area.

High level monitoring of software is usually intractable, inaccessible or insecure. Consequently it is beneficial to monitor lower level events and restore original events by means of using some event detection system.

Colored Petri Nets provide superb detection intelligence for this type of task. Using the right CPN signatures it is possible to efficiently reconstruct high level system events from the stream of system calls. The reconstruction can be done in several stages, closing the semantic gap in smaller steps. Application of CPNs results not only in the recognition of particular functionalities, but the whole set of technologies start to be available: anti-obfuscation tracking, structured SIEM reports, and unknown program classification. Some of these technologies were explained in this paper.

The CPN based engine developed by authors proved to be an enabling technology for ongoing and new research. 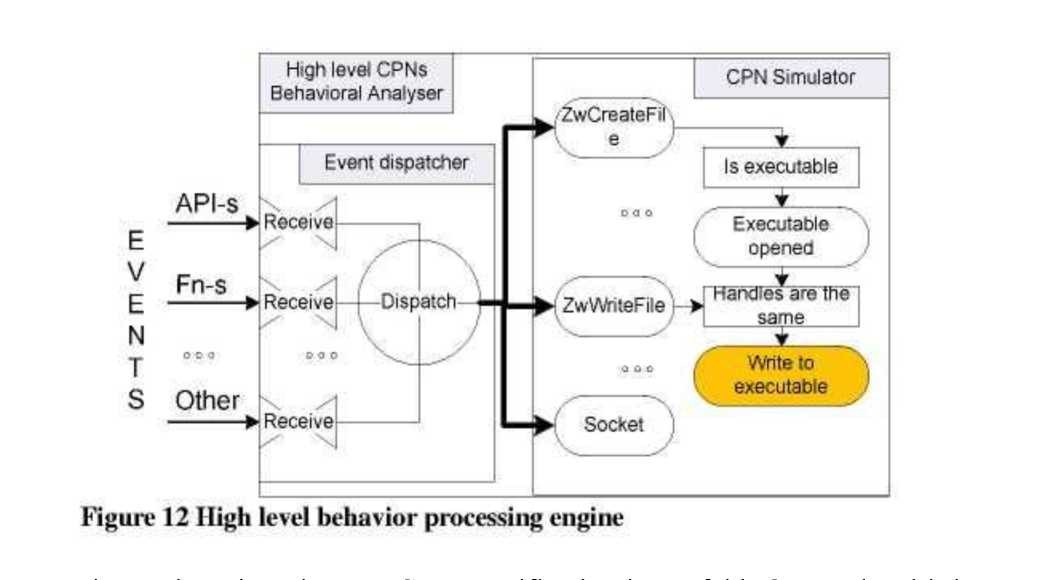