Throughout the world, breast cancer occupies a leading position in the structure of overall morbidity and mortality [1]. To date, malignant neoplasms of the breast are a big social problem since they are often found among the able-bodied population [2].

In the Republic of Kazakhstan, among the indicators of primary disability, oncological diseases rank second, but the problem of disability due to malignant neoplasm of the breast is not fully understood. In our country, breast cancer continues to take the leading positions and therefore over 2,5 thousand women become ill with this nosology annually. In Karaganda region, breast cancer is 15.7% in the structure of all malignant neoplasms and 53.6% among tumors of the reproductive system of the female population. The high incidence rate falls on the working age, which demonstrates the particular urgency of this problem and dictates the need for its detailed study [3].

Among the etiological factors contributing to the development of breast cancer, hormonal disorders, heredity (the presence of BRCA1 and BRCA2 associated mutations) play an important role, all kinds of inflammatory processes in the mammary glands, environmental factors (components of motor vehicle exhaust, tobacco smoke, gasoline, various kinds of solvents) [7, 8].

In breast cancer, the main peak of morbidity falls on the age of 45-59 years, while the incidence of malignant neoplasms of the other localization increases with age, reaching a maximum value by 70-80 years.

Breast cancer has a wide variation in frequency between different geographical regions. There are studies demonstrating the differences between regions with high risk in Europe, Central Asia, and Africa [4, 5]. There is a higher incidence of women living in megacities than those living in small towns and rural areas.

The incidence of breast cancer is also not the same depending on the national characteristics. For example, Asian women, African women, traditionally have a higher birth rate than European women, so they rarely have malignant neoplasms of the mammary glands. The relationship between breast cancer and diabetes and obesity has been established, and it can be concluded that the increase in the number of breast cancer patients will increase, depending on the increase in the number of patients with these nosologies [6].

Considering the tendency to the growth and diversity of etiological, ethnographic, territorial factors, the study of the epidemiological features of breast cancer in Karaganda region is no less relevant and is of great interest in science.

The aim of the study was to study the epidemiological features of breast cancer in women of different ages in Karaganda region.

Materials and methods. Retrospective epidemiological analysis of the data of the official statistical report No. 7 “Report on Patients and Diseases

Table 1: Incidence of breast cancer in the period from 2012-2016 in Karaganda region, the dynamics of stages of the tumor process.

Table 2 shows the data according to the age of the patients.

of Malignant Neoplasms” in accordance with the Code of the Republic of Kazakhstan “On the Health of People and the Health System” for the period 2012-2016. The basis for epidemiological studies was information about patients with breast cancer in Karaganda region. In all patients, the diagnosis of malignant mammary gland formation was confirmed morphologically and the stage of the disease was established by the TNM system. The data was analyzed based on methods used in oncoepidemiology. General and standardized indicators were used to analyze the dynamics and distribution of morbidity across the territory.

Despite the achievements in the organization of public health and practical oncology, the rates of breast cancer incidence tend to increase. For the period 2012-2016 in the region, 17,368 patients with malignant formations of various localizations were registered, of which 2,377 cases of breast cancer were detected. In the structure of the oncological morbidity of the population for the entire period of observation, the nosology studied was invariably the leading one. The absolute number of cases of malignant tumors of the breast was in 2016 (505 people), which is 12.5% higher than in 2012 (442 people). In recent years, the frequency of early diagnosis of breast cancer of the

I-II stage has become much higher than 394 cases in 2016, compared with 327 cases in 2012. The indicators of the terminal stage of breast cancer decreased by 17.7% in 2016, in comparison with 2012, as well. These changes could be related to the improved screening service in polyclinics of Karaganda region. Epidemiological features of breast cancer over a five-year period depending on the stage of the disease are presented in Table 1.

There is a tendency of increased incidence in young, childbearing and working age of 30-44 years. In 2016, the number of people with breast cancer is 20% higher (8 cases), compared to 2012, when this figure was 6 cases in the 30-34 age category (Fig. 1). In the same year, the incidence rate of breast cancer at the age of 40-44 years, in comparison with 2012 (Fig.2) increased by 12.9% (39 cases). A major role in the etiology of this disease at a young age is played by factors that arise when the reproductive system of the body is disturbed a violation of menstrual, sexual, genital, lactational, genetic function. Unfortunately, in view of the lack of additional information about the history of the disease (the onset of menarche, sexual activity, the presence or absence of labor, etc.), it is not possible to provide a more detailed epidemiological picture.

Table 2. Age features of breast cancer for a 5-year period in Karaganda region.

There is also an increase in breast cancer cases in the age range of 65-69 years and 75-79 years and the relative stability in incidence rates over the age of 80 years. (Fig. 4).

1. In the structure of cancer incidence of women in Karaganda region, breast cancer ranks first.

2. In the region, high rates of detection of breast tumors at early stages of the tumor process were recorded. In 2016, breast cancer was diagnosed at stage I-II in 78% of patients.

3. For the period under study in Karaganda region, the consistently high prevalence rates of breast cancer were noted, due to the survival of this category of patients, the early detection and, accordingly, the successful treatment of malignant breast tumors.

4. The main indicators of the incidence of breast cancer during the observation period in the region fall on the age of 50-59 years and the incidence of cases detected in 2016 is 16% higher than the same figure in 2012.

5. The increase in breast cancer cases in the age range of 65-69 years and 75-79 years and the relative stability in morbidity rates over the age of 80 years have been revealed. 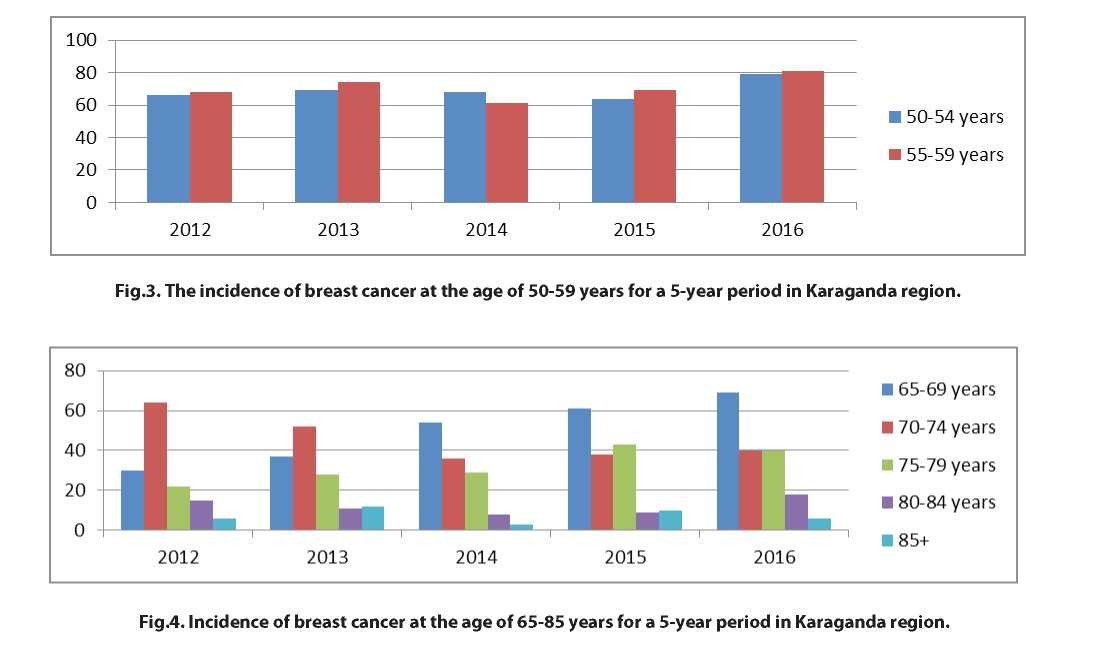