Hypoplasia of the teeth and poor hygiene of the oral cavity in preschool children with somatic pathology resulted in the growth of dental caries (in 70% of cases) andother diseases of periodontal tissues (in 29.6 % cases). To stabilize the carious process and to prevent the development of dental diseases, we used our own modification of remineralization therapy (remtherapy) with the domestic dentifrice "Remin". One-year course of the therapy ∞nsisted of 10 daily procedures, with 4 ∞urses in total on a quarterly basis. The hygienic state of the oral cavity of healthy children was improvedin 93.3% cases in the following six months and was associated with a decrease in inflammation and bleeding in the gum area as well as with no new carious cavities developed. Moreover, results of the enamel resistance test to acids (TER - test) showed an increased resistance to acids.Thus, the domestic dentifrice "Remin" improved oral hygiene, increased enamel resistance, reduced inflammation; all these in turn ensuredits effectiveness at the stage of the white spot leading to tIiestabilization of further carious progression in the children with somatic pathologies.

At present times, tooth decay occurs more often in pre-school children with a predominance of decompensated forms such as systemic hypoplasia, identified in more than a half of cases, which is often complicated further with the cavity[3].Children are more often infected with caries-associated Streptococcus mutans from the mother by oral route, especially at the age of 1.5 to 3 years. These microorganisms in turn remain in the child's oral cavity for life (Caufteld, P.W., 1997) [11]. Many research works suggest that the earlier microorganisms enter the oral cavity of the child, the higher the prevalence and intensity of caries. Therefore, an early childhood represents a period for the most effective prevention of the dental caries and the reduction of further tooth decay. One of the promising ways of tooth decay prevention in children is a targeted use of the effect of Temineralizingdrugs Whichincrease the resistance of dental tissues to damage [5].New effective synthetic dentifrice with remineralizing properties ’’Remin”, which is confirmed by a patent, was developed in the Republic OfKazakhstan [1]. The following requirements were considered: remineralizing agents should contain mineral substances that are either ionic or represent a source of calcium and phosphate ions in the oral cavity, they should contact with the tooth enamel and to have a chemical affinity to the enamel of the teeth stπιcture.Anti-carious properties of the domestic dentifrice "Remin" were studied throughexperimental models of the dental caries (Kurmangazin SS, Supyev TK) [4]. Biochemical studies showed that a cariogenic diet has a Iiepatotoxic effect (a significant increase in the level of ALT, a decrease in the amount of protein synthesis by liver and in total calcium).

There was a slight decrease in the concentration of urea and phosphorus, an increase in creatinine. "Remin” application was associated with a Iiepatoprotective and calcium modulating effect. Active implementation of preventive measures though the use of the dentifrice "Remin” in experimental animals on a cariogenic diet showed reduction by 33% in the carious tooth decay.

Upon receiving a positive result in the experiments and obtaining permission from the Pharmacological Committee of the Republic of Kazakhstan, S.S. Kurmangazina conducted clinical testing of a new dentifrice "Remin" in preschool children with the goal of preventing dental caries [2]. The author conducted 4 courses of remineralization therapy (every 3 months for 30 days) in the children. So, they rinsed the mouth with the remineralizing dentifrice "Remin" once in two days after each tooth brushing for 5 minutes. After the procedure, children refrained from eating or drinking for 30- 60 minutes depending on their age. The children received 4 courses of remineralizing therapy with "Remin" (quarterly) within a year.

Aim of the study was to investigate remineralizing properties of the domestic dentifrice "Remin" in the prevention of dental caries in preschool children suffering from various somatic diseases.

Material and methods. 54 children of pre-school age with various somatic diseases were observed after receiving remtherapy with the domestic dentifrice "Rcmin" (the main group) [Fig. 1].

Before application of the procedures, all parents of the children under investigation were familiarized and signed a written consent. The data of the clinic was used as indicators of dental status in the healthy children of preschool age (58 people) (Sabitova KE) [9].

The modification of the remtherapy with "Remin" consisted of the following: 5 gr of dry powder "Remin" was diluted in 30 ml of warm boiled water followed by separation into 2 parts. Upon application, the tooth surface was cleaned from the plaque with an antiseptic solution. Afterwards, sterile tissues were wetted in the prepared solution, followed by its placing on a disposable tray and fixing it on the lower and upper jaw teeth. In case of need, the nurse or the mother held the jaw closed. Rcmthcrapy lasted for 5-7 minutes, after that the kappas with the tissues were removed from the child's oral cavity (Fig. 1,2). Following the procedure, in order to maximize the effect, the child was not recommended to cat or drink for 30-60 minutes, the timing depended on age. One- year course of remtherapy consisted of 10 daily procedures (4 courses in total, quarterly) (Fig. 2 a, b).

The healthy children (the compared group) and their parents were trained and regularly followed the generally accepted rules of oral hygiene. Standardized study conditions were followed for both groups of the children. The children brushed their teeth with issued toothpaste samples twice a day, according to generally accepted rules, in the morning and in the evening under the control of their parents. The prevalence and intensity of the dental caries was assessed according to generally accepted criteria: the number of carious and sealed teeth of temporary bite (kn), (kp + KPU), the number were studied afterwards; carious and well- groomed teeth in the subject (KPU). The hygienic index (Hl) was determined according to the method of Yu. A. Fedorov - WoIodkina [10], the gingivitis index (GI) - by Loe, Silncss, and the PMA index by Parma [12,13]. 24 teeth were taken as the total number of teeth. CPITN index recommended by WHO, the European B-IO indicators were also applied, so, the "gum bleeding" cither was designated as "determined" or "not determined" [6]. The test of enamel resistance to acids (TER- tcst) was carried according to the method of VR Okushko and LI Kosareva [8]. The dental health was defined by the method of PA Leus [7]. T-Student test and Student's criteria were applied to perform statistics.

Results. In the healthy children of 1 year or smaller, no carious teeth were found. Caries began to appear from the age of two and increased gradually, by the age of 6. The cavity prevalence increased by 6-7 times (average prevalence - 38.8±6.35%, intensity - 1.09±0.24). Mainly 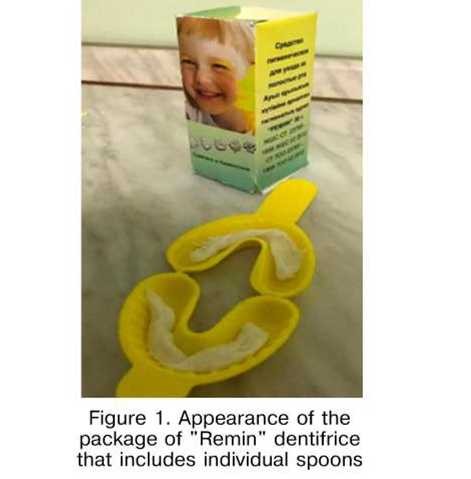 compensated forms of the dental caries was diagnosed in healthy children of 4 years or smaller, but starting from the age of 4, the subcompensated forms of carious progression increased in those children, particularly, 42.9 % and raised to 69.9 % by the age of 6.Decompensated forms of carious progression were detected only in 6-year-old children (9.9 %). Among non-carious lesions of the dental hard tissues, hypoplasia Oftemporary toothenamel was observed in 3.4% in healthy preschool children. According to the data, 27 % showed poor oral hygiene; moreover, 9.7 % of the healthy children showed symptoms of periodontal tissue diseases such as edema, hyperemia and bleeding gums in the area of the damaged teeth.In 15.8% of the healthy preschool children dental and jaw abnormalieswere identified, 10.6 % of the children had diseases of the mucous membrane,anomaly of the bridles of the lips and shallow vestibule of the mouth; 2.2 % of children had secondary jaw adentia due to early removal of temporary teeth.Structural and functional resistance of enamel in the healthy children was at a relatively high level (TER = 4.01±0.15 points). In general, the level of the dental health of the healthy preschool children were defined within 80%, which is an acceptable level for this contingent.

In pre-school children with various somatic diseases (developmental defects of CVS, respiratory organs, alimentary tract and CNS pathologies), the progression of the dental caries was more aggressive, and it was detected in 53.3± .92% of the patients with an intensity of 3.0±0.73. At the same time, the dental caries took place in 75 % of the patients by the age of 6 years with the start at approximately of 2 years. In the children with somatic pathologies, hypoplasia of the teeth increased almost by 30 % (in the healthy people -3.4 %). The number of children with poor hygiene of the oral cavity increased up to 64 %.In the healthy group, compensated forms of the dental carieswere identified predominantly,whereas in the children with somatic pathologies, the subcompensated and decompensated forms were most common. Moreover, these children showed moderate and lowered structural and functional resistance of the enamel. 6 % of these patients showed a delay in the development of the dentoalveolar system, so, particularly, 36.3 % were identified with forming dentoalveolar anomalies, the remaining children had mild forms of dentoalveolar anomalies. 26 % showed various diseases and abnormalities of the oral mucosa (short frenum of the lips and tongue, shallow vestibule of the mouth). With an increase of age of the children with somatic diseases there was increase in the frequency of periodontal problems (29.6 %). Parodont manifested itself in the form of edema, hyperemia and bleeding gums in the area of the destroyed teeth. Due to poor hygiene of the oral cavity of the examined patients, gingivitis was detected (70 %) with few cases of peri odontitis. After 6 months, in 93.3 % of the healthy children, the hygienic state of the oral cavity improved, and the number of children with unsatisfactory oral hygiene decreased to 6.7 %. Improved hygiene of the oral cavitywas accompanied by the reduction of inflammation (edema and hyperemia) and bleeding in the gum area. After sanitizing the oral cavity and teaching on oral hygiene in children with somatic pathologies, inflammatory conditions in the periodontal tissues were improved and accompanied by an increase in the PMA index.Due to the improved oral hygiene and application of the complex of therapeutic and prophylactic measures with the use dentifrice "Remin", there were no new carious Cavitiesidentified. There was an increasing tendency in the indicators of the FER-test,By the end of the study, the dental health of the healthy children and those with somatic diseases were practically the same. All children have improved oral hygiene, the carious processes were stabilized, the KPU index (the sum of caries, fillings and removed teeth in one individual) remained at the initial IeveLThus, a new domestic dentifrice "Remin" improved oral hygiene, increased enamel resistance, showed anti-carious and antiinflammatory properties, which underlies its effectiveness in the prevention of further caries developmental the stage of the white spot. Conclusion. Dynamic observation after six months showed good and Satisfactoiy results in the patients of the main group (there was an increase from 24,5 % to 93.3 %). Improved oral Iiygienewas accompanied by a decrease in the dental caries intensity and prevalence as well as with statistically significant improvements in the parameters of the TER-test and PMA in both groups. The level of oral hygiene increased by 3 and 4 times, the compared and the control groups respectively. After sanitizing the oral cavity and teaching on oral hygiene in the children with somatic pathologies, the level of inflammation of the periodontal Iissueswas decreased followed by an increase in the PMA index (papillary-marginal- alvcolar index). The appearance of new carious cavities was reduced to a minimum due to raising the level of oral hygiene and the implementation of a complex of therapeutic and prophylactic measures using the dentifrice "Rcmin". By the end of the study, the indicators of dental status in the healthy group and those with somatic diseases were practically the same. All children showed an improvement in the oral cavity hygiene, the carious processeswere stabilized; the KPU index remained at the initial level. It is established that an application of the domestic dentifrice "Rcmin" resulted in the improvement of the oral hygiene, an increase inthe resistance of the enamel and prevention of further caries progression at the stage of the white spot not only in the healthy but also in children with somatic pathologies.