In the article, the methods of switching stages of a multi-level inverter are studied. These techniques use pulse-width modulation for switching, which is obtained by comparing a reference sinusoidal signal and a sequence of triangular pulses. The article describes algorithms for obtaining a control sequence of pulses and examines how a particular strategy can reduce the coefficient of harmonic components of Ihc output voltage of the inverter. To do this. Simulink simulates each of the strategies for different frequencies. Based on the simulation results, the dependence of the coefficient of nonlinear distortion on the frequency of the carrier oscillation for different Switcliing strategies is obtained. The simulation was performed without filtering the output voltage of the inverter, and with the use of a low-pass filter. In addition, an experimental study of a six- level PWM inverter was performed. Using the Fluke 435-11 electrical energy’ analyzer, oscillograms and spectrograms of the inverter are obtained. Harmonics of the output voltage are detected that differ in power from the entire spectrum.

The use of PWM is widely used to obtain a sinusoidal voltage at the output of a single- level inverter, where the pulse width of the carrier oscillation varies according to the sinusoidal law. But PWM can also be used for switching in a multi-level inverter [7-10] with the only difference that the carrier vibrations form each of the stages of the inverter separately.

Based on the topology of building a multi-level inverter, presented in [11], we investigate how various strategies can reduce the coefficient of harmonic components, and determine the optimal one.

The method of switching

The PWM-based switching strategies discussed in this article are listed below:

Consider a common-mode PWM strategy for switching stages. The modulating signal Us is a sine wave with an amplitude of 312 V and a frequency of 50 Hz according to the law

Thus, we can investigate the effect of this coefficient on the coefficient of nonlinear distortion. Similarly, we introduce the concept of the amplitude coefficient kA, which will be calculated using the formula

Consider strategies based on a three-level inverter [13]. Let the level of the steps be the same and conditionally equal to 1. In this case, the Amplitude of the modulating oscillation is equal to 3.

As you can see from the picture, the carrier vibrations for each stage are in the same phase. The number of carriers required to obtain the switching time at each level is equal to the number of inverter stages multiplied by two. It should be noted that all carriers have the same amplitude. According to this strategy, if the value of the carrier triangular oscillation for a given time is higher than the value of the sinusoidal signal, then a high - level value is formed, otherwise a low-level value is formed. Thus, the commuting pulse is generated whenever the triangular pulse of the stage is larger than the sine wave.

For an alternating antiphase PWM strategy, the carrier vibrations of the same amplitude are in the opposite phase relative to the neighboring ones (Figure 1C). In fact, this and the previous strategies are convenient from the point of view of application, since a phase shift of 180 shifts the carriers so that the positive and negative half-waves are in the same position relative to the carriers. Thus, the pulses are formed for positive and negative half-waves in the same way, which is very convenient. 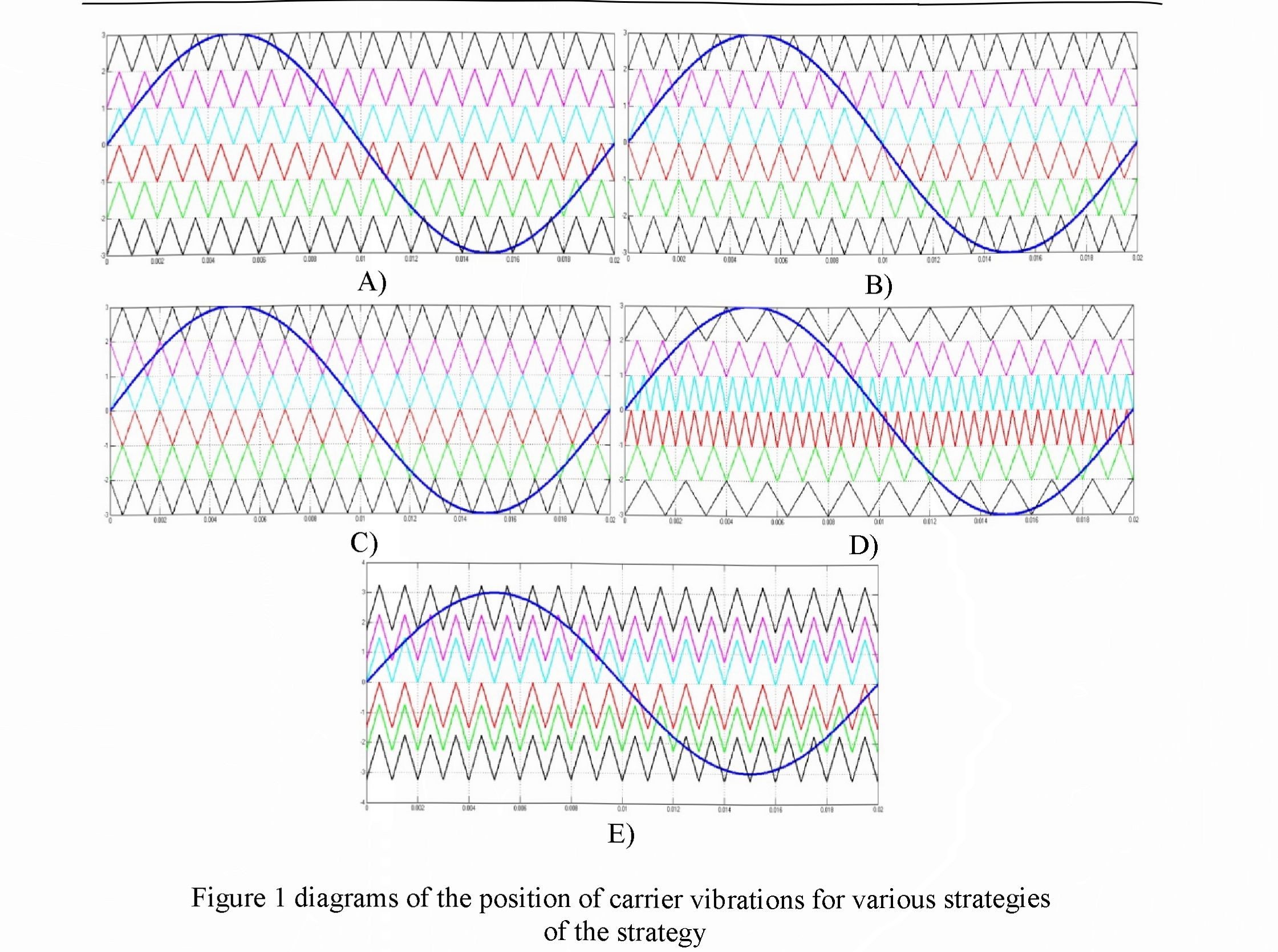 To study the effect of switching strategies on the coefficient of harmonic components, we will build a special model in the Simulink visual modeling environment.

Figure 2 shows a model of a 6-level inverter for the study of switching techniques [14]. The Sine Wave block generates a sinusoidal oscillation with a frequency of 50 Hz and an amplitude of 312 V. the Repeating Sequence Block generates a triangular signal of the carrier oscillation. This signal is formed with a constant component from the Constant block, the value of which is adjusted depending on the stage of the multi-level inverter. The triangular and sinusoidal signals are compared by the relative Operator comparison operator, which sends the signal to the power key. If the Sinusoidal signal is larger than the triangular one, the operator generates a logical unit, otherwise it generates a logical zero. To investigate only the impact of a particular strategy, we will exclude the influence of IGBTs, which we will replace with conventional power keys, which are represented by Ideal Switch blocks [15]. 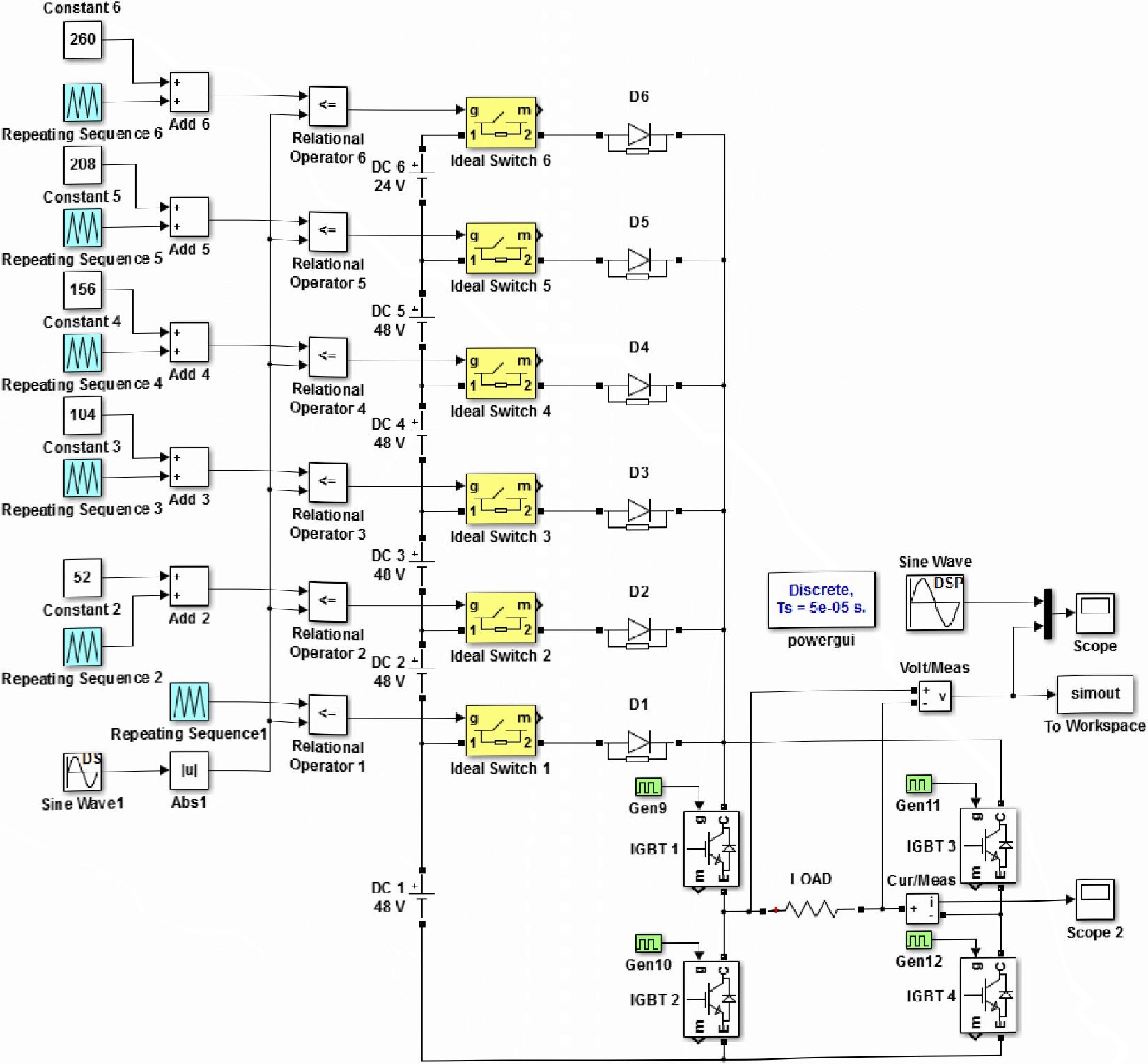 The output voltage obtained from the simulation differs from the usual step voltage by the presence of pulse-width modulation (Figure 3). It should be noted that the closer the pulses are to the border of the transition to a high level, the wider the pulses and vice versa.

To compare strategies, the value of the nonlinear distortion coefficient is important, which is automatically calculated using the powergui block by means of a fast Fourier transform. The data for the strategies are listed in table l.as you can see, the coefficients of nonlinear distortion are quite large, due to the presence of high frequencies in the output voltage of the inverter. Therefore, these strategies are applied with a low-pass filter. In order not to distort low frequencies, it is necessary to select a filter with a smooth frequency response at the bandwidth frequencies [16, 17]. A typical third-order Butterworth filter with a cutoff frequency of 1000 Hz was used [18]. For modeling, the Butterworth filter is built using the Analog Filter Design block, where the filter order and cutoff frequency are set to 6283.2 rad/s. 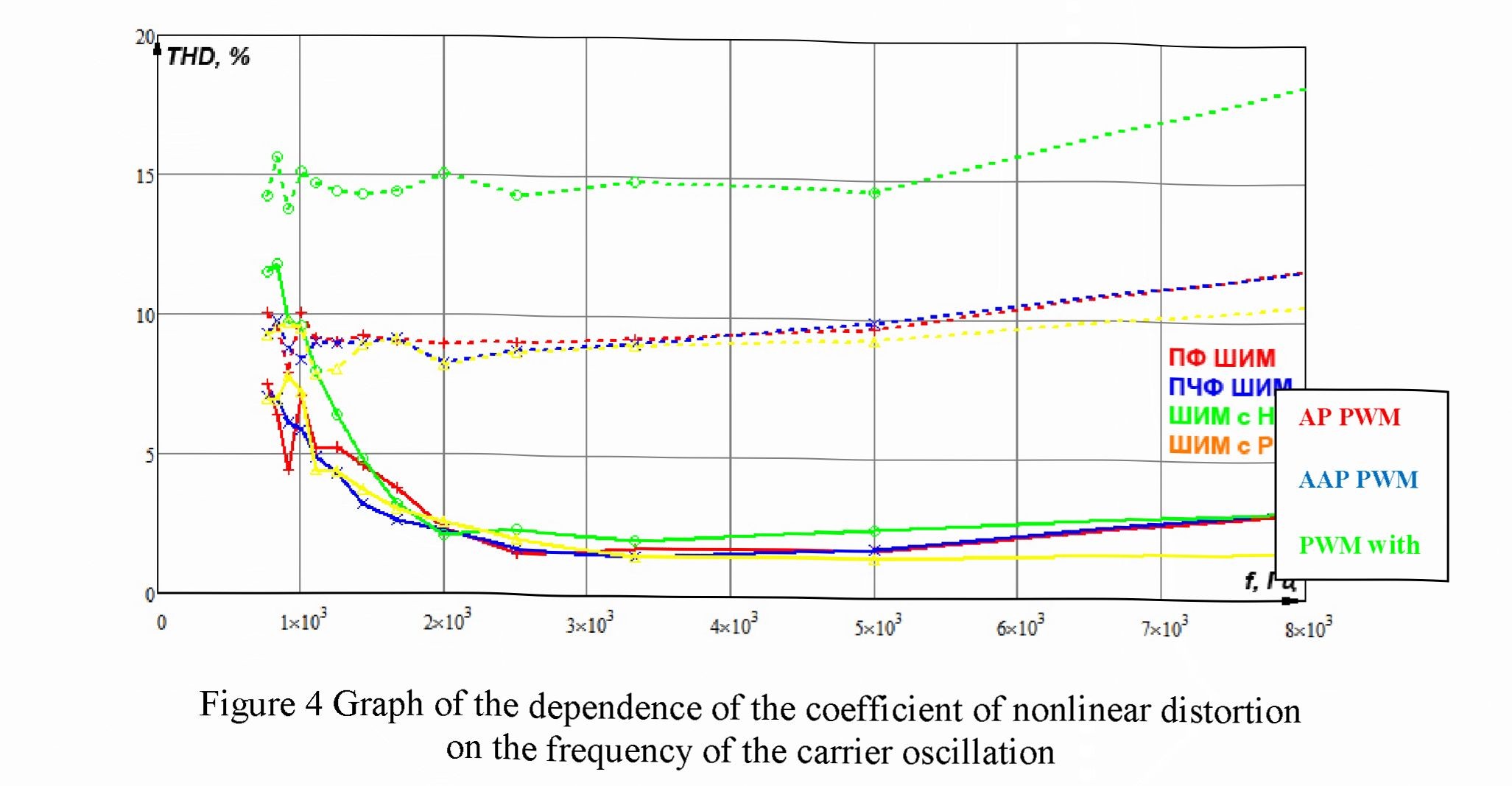 As can be seen from figure 4, for all strategies, at low values of the frequency coefficient kf, a high value of the nonlinear distortion coefficient is observed, and with increasing carrier frequency, this coefficient decreases to a certain minimum and then increases slightly. At the same time, the lowest coefficient of nonlinear distortion is observed when using a PWM-based switching strategy with RF. When implementing a power inverter, however, you should not choose a higher frequency, since the frequency increases the energy loss for transients. It should also be borne in mind that switching is performed by power keys, such as IGBT or MOSFET, transients in which at a high switching frequency can disable them [19, 20].

As you can see from figure 5, the shape of the output voltage of the inverter has spikes on each of the stages, but it is visually close to the sine wave. The output voltage spectrograms of inverters are of particular interest. You can see that the 37th, 39th, 41st and 43rd harmonics, whose frequencies are 1850, 1950, 2050 and 2150 Hz, respectively, are expected to stand out in power from the entire spectrum. This is naturally related to the pulse frequency of the pulse width modulation stages. Harmonics at this frequency are very convenient to filter, since the filter is set to high harmonics, i.e. with a higher slice frequency. This filter is lighter and more compact in comparison with a conventional LFF, and is very simple in design.

The article deals with methods of switching stages of a multi-level inverter based on pulse-width modulation. Based on the results of Simulink simulation, the dependence of the nonlinear distortion coefficient on the frequency for various strategies without filtering the output voltage of the inverter, and with the LPF is obtained. It was found that the lowest coefficient of nonlinear distortion can be obtained when using a switching strategy based on PWM with different frequencies for stages. An experimental study of a six-level inverter with the proposed switching strategy was performed.