This article is devoted to the study of the general provisions of the politeness category in linguistics, positioning politeness as an essential condition for successful Coimnunication. Various approaches to the definition «concept», the stmetme of the politeness concept is revealed and analyzed. Directly the universal category of the term «politeness» is analyzed by the authors. From the standpoint of cognitive linguistics, the authors also consider the specifics of the components of the «politeness» concept. The concept of «politeness» lias a small figurative component, a large infonnation content, a voluminous encyclopedic zone, and a small interpretive field in the frame of volume and structure. During the associative experiment, it is shown that the concept of politeness is represented by various associations and reflected the existing language consciousness of Kazakhstan's modem youth representatives. The authors reveals similarities and differences in the understanding of the concept studied by the representatives in comparison of Kazakh and Russian COimnunicative Iinguoculturcs. It is necessary to understand, know and take into account both the general meanings and specific components of the concept in the frame of intercultural multicultural Coimnunication.

One of the most important types of human activity is rightfully considered to be speech communication. The problem of polite speech behaviour attracts the attention of many specialists.

Globalization and the expansion of the boundaries of international cooperation lead to an increase in the role of intercultural communication and an increase in its significance in modem life. In this regard, the category of politeness is often in the focus of sociological, pragmatic, as well as linguistic studies.

Human activity cannot be imagined without verbal communication. In order for a speech act to be proceeded without conflict and benevolence it requires the presence of an element of politeness, which is one of the basic components of interpersonal communication. The problem of polite verbal communication was always relevant. Currently, a lot of attention is paid to this problem. The success and effectiveness of intercultural interaction is predetermined by knowledge of the language. Of course, in addition to language, it is important to know the culture of the people, their traditions, values, to understand their worldview and world outlook.

Politeness is a complex socio-cultural phenomenon. It is closely related to the basic principles of the sociocultural organization of society and the interpersonal relationships that exist between its members and communicative consciousness. Courtesy is determined by the set of socio-cultural values that guide the interlocutors, satisfying mutual expectations. The issues associated with politeness and its implementation in different cultures are of interest to specialists in many humanities, such as psychology, ethnopsychology, cultural studies, anthropology, psycholinguistics, sociolinguistics, pragmatics, applied linguistics, communication, etc., and this is not accidental, since they can be considered only at the interdisciplinary level and in the intercultural aspect. The increased interest in “linguistic” politeness indicates the importance of this issue in human relationships in general and in intercultural communication in particular.

Politeness is an essential component Ofintercultural communicative competence. Many problems of intercultural communication arise precisely because of the inability of the interlocutors to demonstrate their relationship to each other in accordance with the norms of this society and the specific expectations of the partner. The category of politeness is universal and at the same time specific to each culture.

The presence of the concept of «politeness» in different languages confirms the existence of this concept in linguistic pictures of the world of peoples-carriers of these languages. Representatives of different cultures play a significant role in the concept being studied by numerous linguistic examples: single words, synonymic series, phraseological combinations, proverbs, sayings, sayings, which, in general, verbalize the concept of «politeness».

The concept of “politeness” is an abstract mental entity that materializes in linguistic units ofvarious levels, interconnected by semantic relations.

In the field of cognitive linguistics today there are various approaches to the interpretation of the structure of the concept. In the framework of one of the most common approach, the structure of the concept is made up of the nuclear and peripheral layers. The nuclear component contains the most important information about the concept, while the peripheral layer consists of several associative rows, while the series, including frequent associations, is located closer to the core.

data processing of an associative experiment, which allows you to simulate the linguistic consciousness of the «average» native speaker of a particular language.

In Russian, courtesy is a quality of a polite person, a combination of good manners, the ability to behave in society [2]. Analysis of the synonymous series of the keyword allows you to get a more complete picture of the concept. The polite lexeme is the dominant in the synonymous paradigm, embodying the main meaning of this microsystem. Polite - observant of decency, well-mannered, courteous [3].

From the above definitions it is clear that the ideas of different linguistic cultures about a polite person have a common feature: this is a person with good manners, attentive to others, courteous. It is these conceptual elements that belong to the core of the studied concept.

In addition to analyzing the keyword and its synonyms in order to identify associations of the «politeness» concept, a free associative experiment was conducted with representatives of both ethnic groups based on the verbal associations of the respondents. This method of linguistic research made it possible to collect information about the respondents' attitude to the phenomenon being studied - the concept of «politeness» expressed by the words of their native languages, to understand how the communicative environment forms the person’s associative base and helps to identify the ethnocultural specifics of the perception of the studied concept.

The experiment was conducted by students of NKSU named after M. Kozybaev, Petropavlovsk, aged 17 to 20 years, representatives of Kazakh and Russian linguistic cultures. Respondents were interviewed by direct questionnaire. Questionnaires were drawn up in two languages, respectively. It should be noted that the respondents were chosen arbitrarily, regardless of social and gender. The total number of respondents was 100 people (52 Kazakhs, 48 Russians). The questionnaire suggested bringing associations to the concept of «politeness». 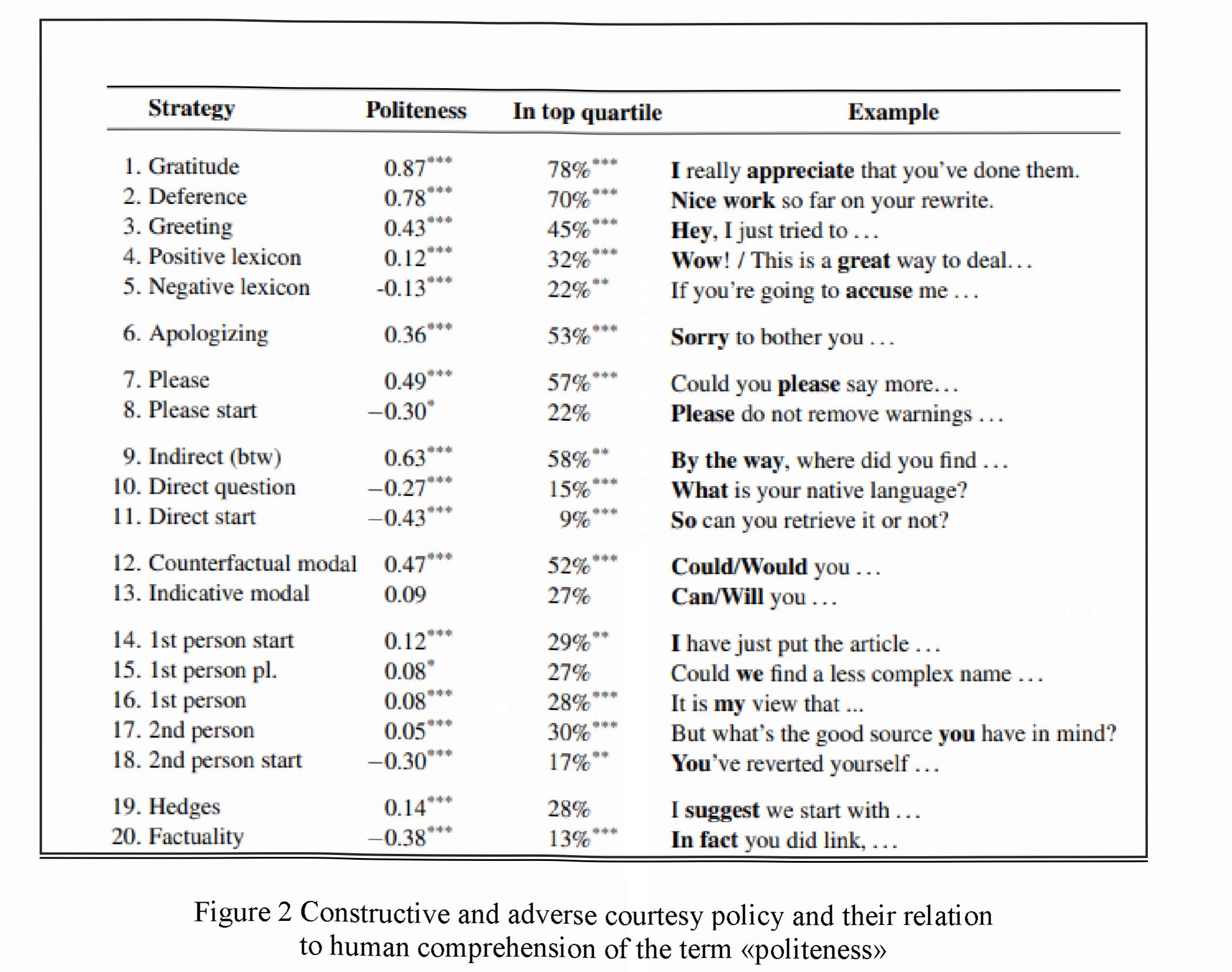 As a result of processing the responses, the most frequency elements that constitute the associative series of the concept of “politeness” were identified. According to the data obtained, the main substantive elements of the studied concept in the communicative consciousness of youth are upbringing, respect and etiquette. Among the associations cited by representatives of both Kazakh and Russian linguistic cultures, the following associations were noted: thank you, greetings, respect for elders, tact, not to be rude, not to shout (speak in a balanced tone), ability to communicate, understanding, good attitude, help, nobility, speak culturally , polite words, education (literacy).

Most associations of representatives of both Kazakh and Russian linguistic cultures have a positive connotation, as evidenced by the presence of such evaluative adjective and adverbial components as good, pleasant, attentive, culturally, correctly, polite, positive, dignified (Russian); жағымды (pleasant), сыпайы (polite), жақсы (good) (ең жақсы - the best), байсалды (balanced), мәдениетті (cultural), орынды (appropriate) (Kazakh). Positiveness in the perception of politeness is also confirmed by the fact that verbs and nouns with a negative meaning are used in a negative form: do not swear, do not scream, do not interrupt, do not be rude.

To wrap up, the idea of a polite person among the students surveyed has something universal between them: a polite person is a well-mannered person with good manners, courteous, and attentive to others. However, the concept of «politeness» in the minds of Kazakhstani youth has in its content, along with the general ones, also some national-specific features. Differences in the content of the concept of politeness among representatives of the Kazakh and Russian linguistic cultures are due to norms, values and traditions based on the type of culture.