Efficiency of the application of organic and humint fertilizers, their comparison among themselves and the effect to the different varities of sudan grass (sorghvm svdanense l. )

The article contains results on the theme of the scientific research "Efficiency of the use of growth stimulant and microfertilizer in the cultivation of the Sudan grass (Sorghum sudanense L.) on seeds in the conditions of North Kazakhstan region" are presented.

The research work shown comparison between fertilizers that used to study their influence to different A arities of Sudan grass. Objects of investigation: Biohumus, Humint, Agrostimulin, Lignohumate fertilizers and plants of Sudan grass (Sorghum sudanense L.).

In Kazakhstan, the region of Northern Kazakhstan in particular, is the task of developing meat cattle breeding. For the intensive development of livestock and its intensification, cheap, high - grade, high - nutrition fodders has neccesity in sufficient quantities. Feed crop give for animals green food, hay, haylage, silage, dehydrated and fortified food [1].

They are can provide animals with cheap, high-grade fodders, balanced for protein, energy, amino acids, especially in their green mass in modern conditions [2].

The conditions of farming and fodder production in Northern Kazakhstan are extremely diverse. Common to all zones is the continentality of the climate, characterized by a general lack of heat, a short vegetation period, late spring and early spring frosts, a moisture deficit, and the variability of meteorological factors by years [3].

One of the forage crops, the most valuable and promising for cultivation in the conditions of Northern Kazakhstan is the Sudan grass (Sorghum sudanense L.). Sorghum belongs to the tribe Andropogoneae of the Gramineae family Poaceae [4].

Sudan grass is a valuable crop for the production of green forage, hay and silage. Green mass both on the pasture and in the sloping form is well eaten by all kinds of cattle [5]

The protein content decreases sharply at the beginning of the earing - flowering, but the content of cellulose increases markedly. According to the content of fat and nitrogen - free extractives, it almost does not differ from the hay of annual grasses and leguminous grasses. Sudan grass contain tannins and phytic acid there are less digestible than other cereals for human and monogastric animals [7].

The most valuable economic quality of Sudan grass is high ability to grow after mowing or proper bleeding. Under favorable conditions, its growth during the day can reach to 5 - 10 cm [8].

In the experiment were used organic fertilizers that previously applicate to cultivate Sudan grass.

Biohumus is an environmentally pure organic fertilizer, a product of processing cattle manure by a population of a technological worm. This concentrated fertilizer contains in a balanced combination a whole complex of necessary nutrients and trace elements, enzymes, soil antibiotics, vitamins, growth hormones and plant development. It has a large amount of humic acids [10].

Agrostimulin» promotes the accelerated division of plant cells, the development of a more powerful root system, an increase in the leaf area and chlorophyll content, reduces the phytotoxic effect of pesticides, has an antimutagenic effect, improves the quality of the grown produce, improves yield, plant resistance to diseases, stress factors, resistance to adverse factors of the external environment (overcooling, overheating, lack or excess of light and moisture), it becomes possible to reduce the rates introduced pesticides, 3-5 times during the growing season when using the drug.

The research work was conducted from of June 2015 to September 2017.

The experimental part of the study on the effectiveness of fertilizers was carried out in limited partnership North - Kazakhstan Research Institute of Plant Growing and Livestock on the sowing of Sudan grass.

The main method of study is the field experiment, that studying various issues of farming: crop rotations, soil tillage, fertilizer application, planting and care for plants, and in variety testing and testing of machines [11].

To conduct research the study of the efficiency of fertilizer application on plants of Sudan grass, selected Sudan grass varieties. For the implementation of the experiment, four varieties were taken: Tugai, Novosibirskaya 84, Kinelskaya 100, Alina.

In order to determine the effectiveness of the application of organic fertilizers in the cultivation of Sudan grass for seeds under the conditions of Northern Kazakhstan was used the field experiment. For experiment implementation we had 3 variants, one of them was a control one, in which there was no processing, all Subsequentoneshadan experimental setting. The research work consist of the several stages. The first sta«e included the phenological observations during the winter period in 2015 and 2017

After we started to determine the efficiency of fertilizers affecting to the growth and development of Sudan grass, were considered the indicators of the density of standing, linear growth, structure, yield of plants.

In this article, made a comparison between the indicators of density of standing and linear growth when studying the effectiveness of fertilizer application between different varieties of Sudan grass.

Thus, a comparison of all the variants with each other showed that the double processing of Sudan grass plants does not give always high density indices, as in the example by double treatment with Agrostimulin. Presowing treatment with Lignohumate was sufficient to obtain the density necessary for a good harvest. This fact was reflected in the following variants of Sudan grass. 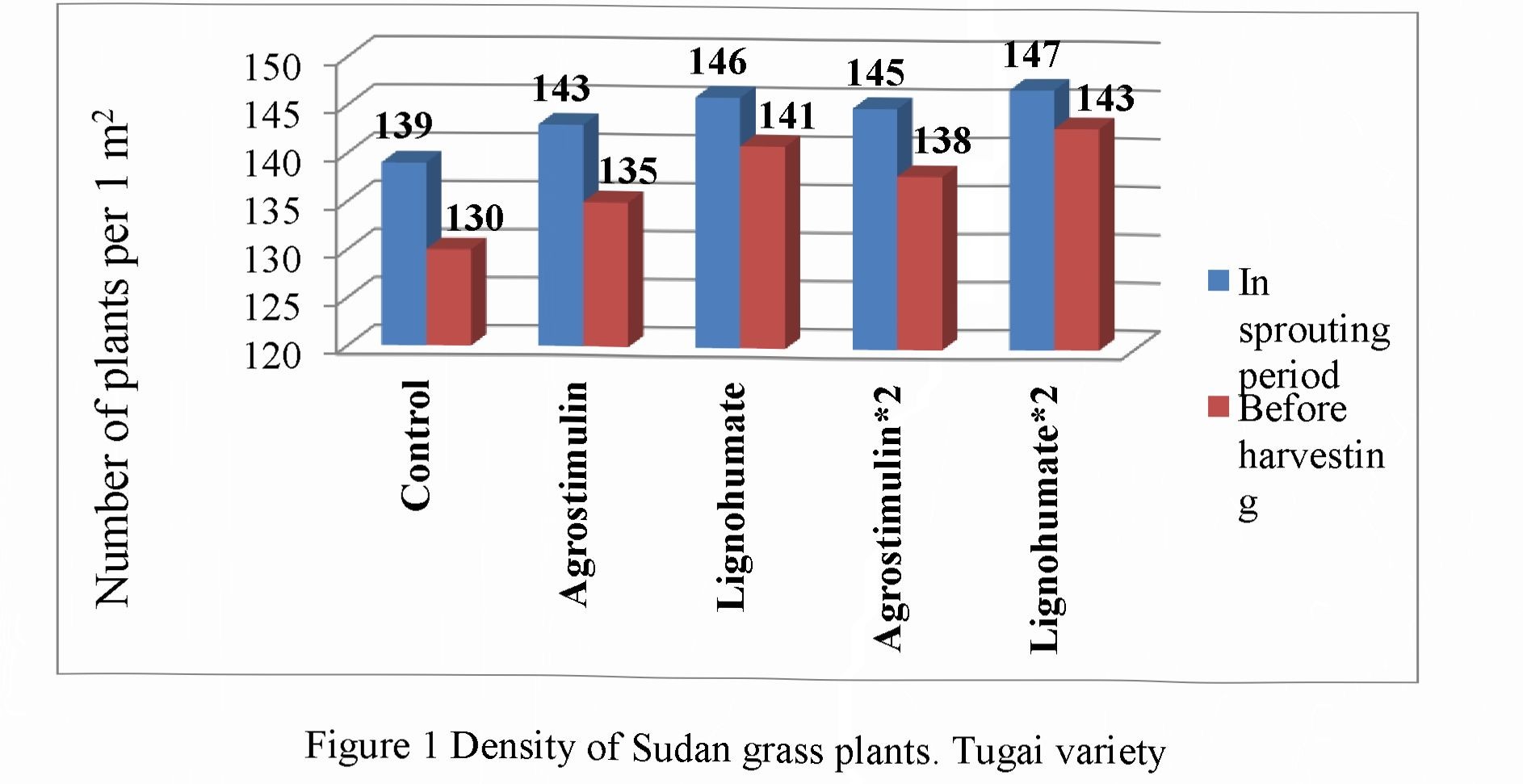 Presowing treatment of plants with Lignohumate and double treatment with Agrostimulin showed practically the same densities in Tugai and Kinelskaia varieties 100 - 146 and 145 and 144 and 143, respectively.

In the Kinelskaya 100 variety, the application of presowing seed treatment and double treatment with Agrostimulin showed no increase in density and was identical in the two variants equal to 143 plants.

The Tugai variety had a large number of non - surviving plants before harvesting to 16 plants, which was due to unfavorable conditions before sowing the crop.

After determining the density of plants in the sowing period and before harvesting, followed a calculation ot the safety of plants, i.e. the number of plants that survived until harvest.

The next indicator in the study of the efficiency of fertilizers was the linear growth of plants, which was measured twice: in sprouting period and before harvesting. 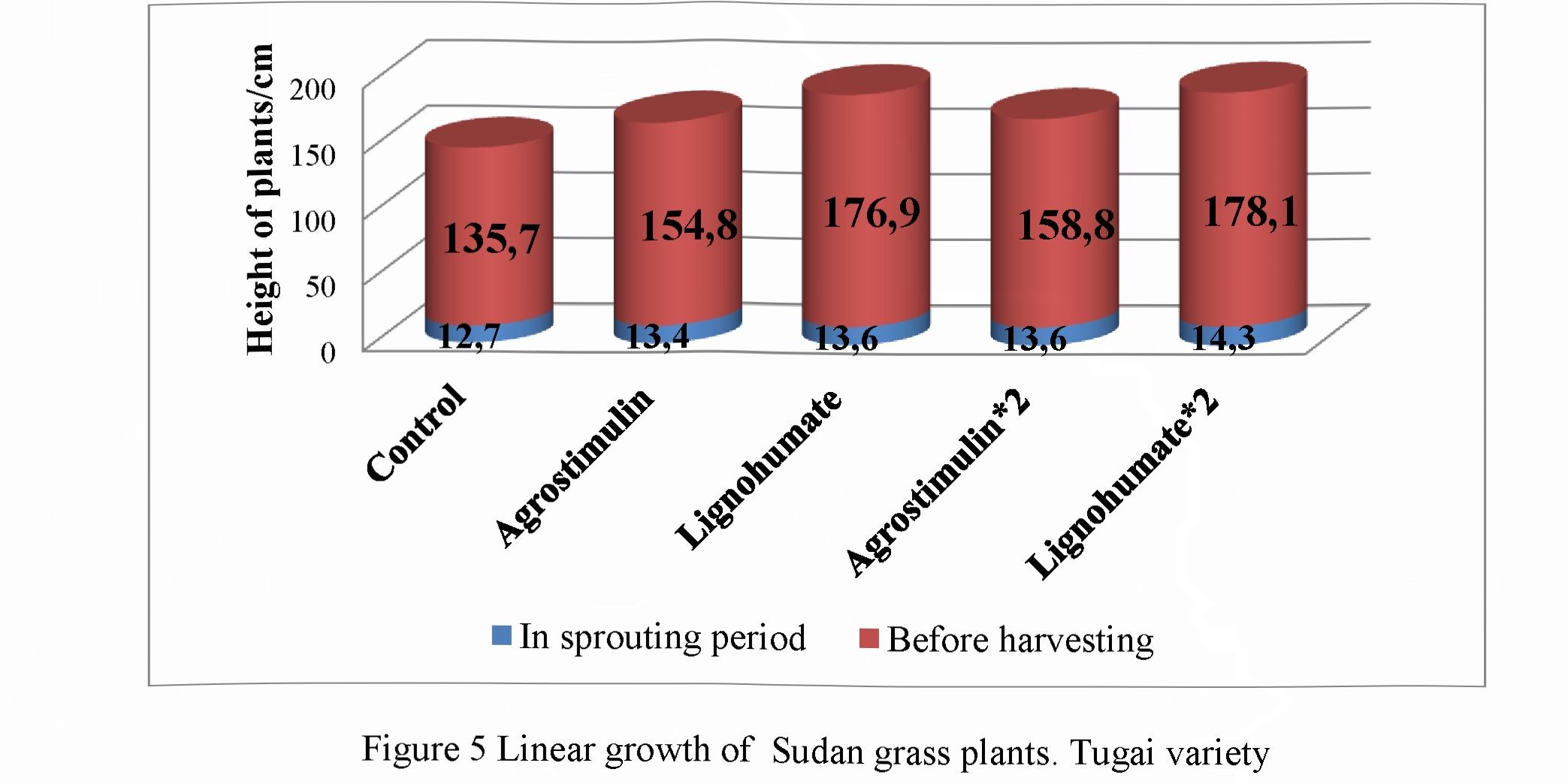 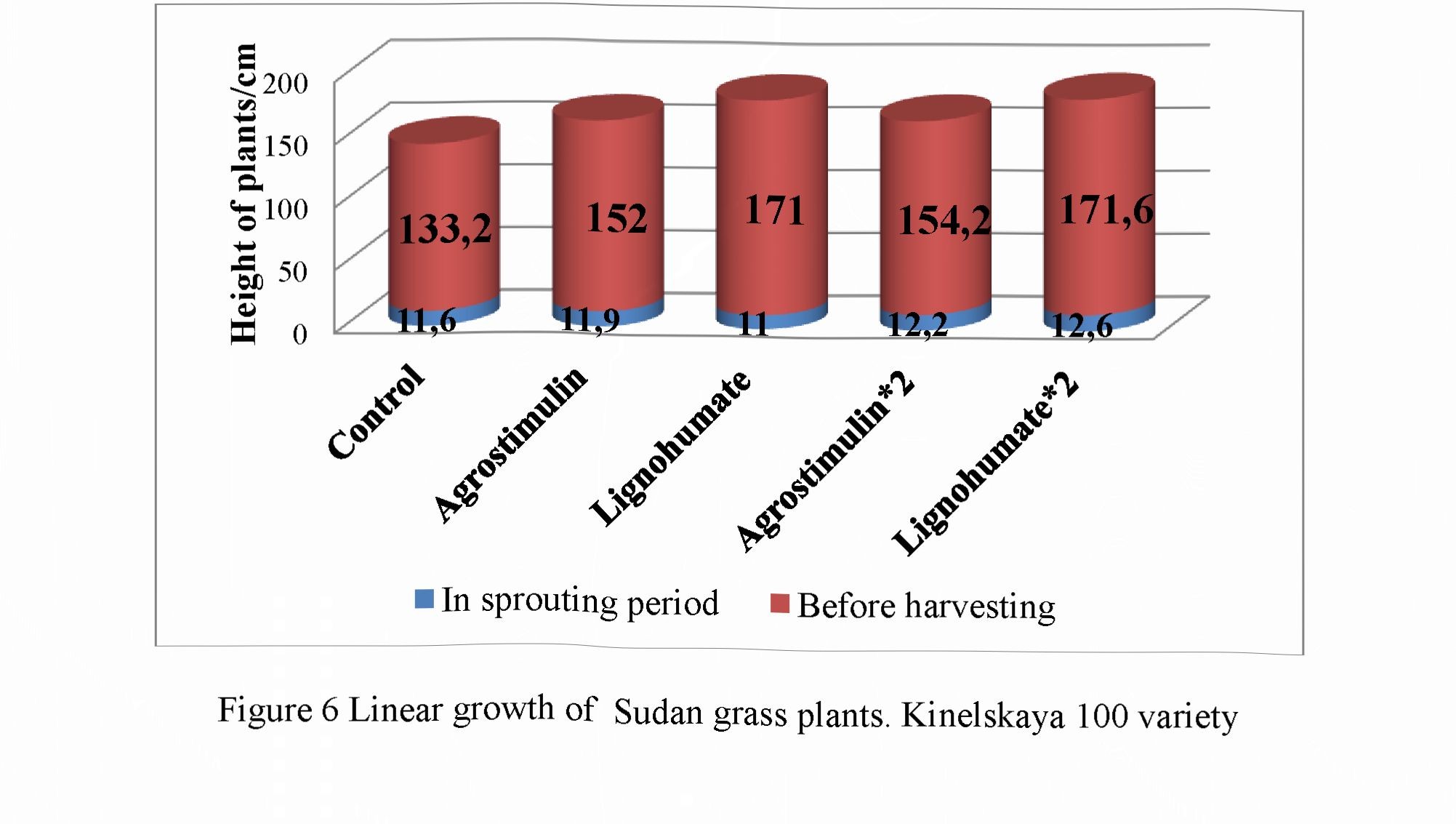 The linear growth of plants in the Novosibirskaya 84 variety in sprouting period was practically the same. On the control the height of the plants was 11,5 cm, and in the Kinelskaya 100 variant, the height on the control was 11,6 cm. In the variant with the presowing treatment by Agrostimulin and Lignohumate plant height was identical to the height of the Kinelskaya 100 plants and was 11,9 cm and 11 cm respectively. Almost the same altitude was in Novosibirskaya 84 and Kinelskaya 100 in variants with double treatment by Agrostimulin and Lignohumate and amounted to 12,1 cm and 12,2 cm, whereas in the Kinelskaya plant height in these variants was 12,2 and 12,6 cm.

Analyzing the linear growth of plants before harvesting the Novosibirskaya 84 variety, were observed that heights were lower than of Tugai and Kinelskaya 100. The height on the control was 132,1 cm, by 3,6 cm lower than in the Tugai and by 1,1 cm lower than the control in the Kinelskaya 100 variety. In the variant with the application of the presowing treatment by Agrostimulin, the height was 149,9 cm, and with double treatment by Agrostimulin, the height was 153,3 cm. In the variants with presowing treatment by Lignohumate and double treatment by Lignohumate heights was practically identical and was 169,9 cm and 170,2 cm, where the height difference was small and equal to 0,3 cm.