Adaptation is a complex psychophysiological process which is accompanied by a significant voltage students body systems. And further successful activity of students depends on adaptation. Successful passage of adaptation in the future will favorably affect learning, increasing the activity of students in educational and cognitive activities. Adaptation to educational process is a multifaceted process that requires the inclusion of all the resources of the body, but among first-year students it is not fully formed.In addition, the first months of training are the beginning of the formation of adaptive reactions to the conditions of the university and, depending on the individual characteristics of the body, the conditions of training at the university can be caused by favorable reactions, trains the organism, or unfavorable, leading to a decrease in the resistance of the organism.Adaptation can take quite a long time. For this reason, students may experience psychophysiological overstrain, as a result of which activity decreases, and before them there is a problem with the formation of a new mode of behavior, as well as the fulfillment of ordinary activities for students.

One of the general theoretical problems of higher education is the problem of adaptation students to the conditions of study in the university. Adaptation in this context is defined as a multifaceted process of activating the social and biological reserves of young people in stage of development and formation, and in this connection requiring an increased attention of the teacher to first - year students, the need for them psychopedagogical support in conditions of higher education. To identify the features of adaptation students first - year students should clarify the understanding of the term in psycho-pedagogical science. Adaptation is a combination of psychological and physiological reactions of the body, underlying the adaptation of it to the surrounding conditions, aimed at maintaining the relative permanence of its internal environment, under which there is a social interaction of the individual, social group and social environment [1].

The first years of education the sharp transition of yesterday's schoolchildren to the new conditions of life and learning causes in the beginning active mobilization, and then depletion of physical reserves and adaptive mechanisms of the body of students.

The initial period of study at a higher educational institution is quite important, both socially and physiologically, in the student's life. New learning conditions, high total training load, large volume, novelty and complexity of the material that the student must master, present the body with increased demands.

Main goal of this article is study and establish the psychophysiological characteristics of students, which affect the adaptation to the educational process.To achieve the goal, the following tasks were set: to determine the levels of adaptation in students IstCourse; toidentify the levels of anxiety in students, to identify levels of basic characteristics of the nervous system among students.

The following methods were used in the study:

Results and discussion of investigation 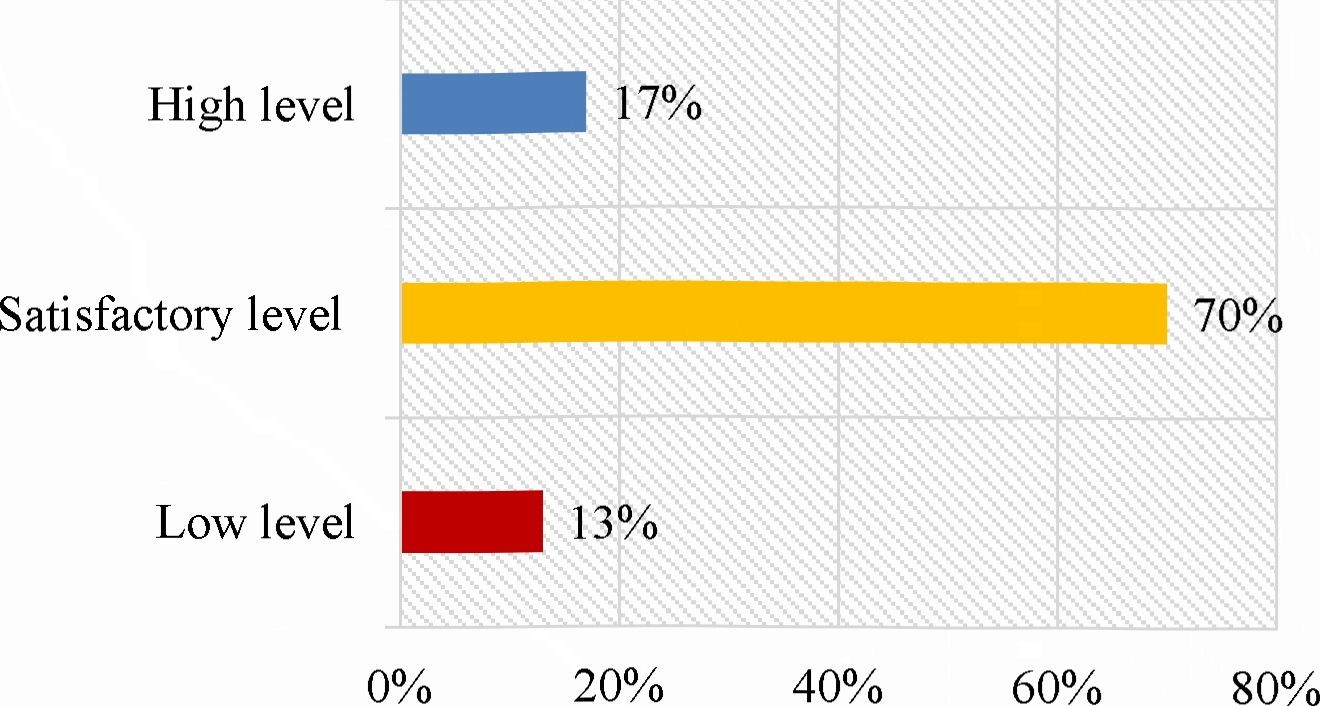 Figure IThe levels of adaptation among students of the 1st course

13% of Studentsof the 1st course had a low level of adaptation. They also had a low level of neuropsychological resistance. Moral normality in these students is below average. This means that they have a low level of socialization, an inadequate assessment of their place and role in the team, a lack of desire to comply with generally accepted standards of conduct. Such students are characterized by a depressed mood, a violation of discipline, independent work is difficult and does not cause interest, they are not confident in their own strengths and strive for submission.

70% of students of the 1st course have a satisfactory rate adaptation level and the average level of the neuropsychic resistance. The adaptation of these students depends on the external environment. These students tend to have low emotional stability. Socialization for them is complicated, asocial failures are possible, as well as an expression of aggression and conflict. The functional state at the early stages of adaptation can be disrupted. Students who belong to this group need constant monitoring.

17% of students of the Istcourse have a high level of adaptation. These students have a high level of neuropsychological stability. The moral normativity of these students is high, a high level of socialization, an adequate assessment of their role in the team, an orientation toward observance of generally accepted norms of behavior. They adapt easily enough to new learning conditions, quickly enter a new collective, are easily and adequately oriented in the situation, quickly develop a strategy for their behavior.

As can be seen, the level of adaptation of students and the level of neuropsychic stability coincide, therefore, have interdependence.

The process of adaptation is closely related to the notion of emotional wringer and stress. So, the factor that prevents successful adaptation of students is anxiety. The occurrence of anxiety links the increase in behavioral activity, the change in the nature of behavior.

Using the technique of assessing personality and situational anxiety (the test of Ch.D. Spilberger in the modification of Yu. L. Khanin), we revealed levels of anxiety in students of the Istcourse.

By results, we can say that most of the first - year students have a high level of anxiety (60%). Satistactorylevelof anxiety was detected in 32% of students and low level of anxiety was in 8% of students. Students with a high level of anxiety are closed and not very sociable. The expectation of tailure and the low self - esteem of these students provide the basis for non - initiative. High situational anxiety is associated with a decrease in attention, and sometimes with impaired fine coordination. The patterns between emotional and motivationally - demanding spheres of personality are closely related to a high level of anxiety. Intrapersonal conflict of a person is the cause of the dissatisfaction of needs, which as a result forms a state of anxiety. High anxiety can adversely affect adaptation, i.e. cause disadaptation in first - year students. The behavior of students with a high level of anxiety is marked by an acute emotional reaction to the report of failure. In stressful situations or with a lack of time, it is difficult for them to work. Fear of failure prevails over the desire to achieve success [2].

It is of interest to study the state of anxiety of students in conditions of study in higher education. It is known that an increased level of anxiety of students negatively affects the functional state of the central nervous system and the organism as a whole. A repeated experience of anxiety can lead to high sensitivity to stress, difficulties of intellectual activity in stressful situations, somatic and neuropsychic abnormalities.

Numerous datademonstrate that lifestyle characteristics of students, manifested in limited physical activity, poor nutrition, poor hygiene training, the daily routine and rest, the prevalence of bad habits, negative impact on their health, give rise to feelings of anxiety, affecting the progress of students [3,4].

Analyzing the table 1 it can be seen that students dominates the high level of excitation, the average inhibition level and the average level of mobility. High levels of excitement among students provide the ability to perform effective activities in a situation requiring vigorous action. Stimulus, quick inclusion into work, workability and achievement of high productivity; low fatigue; High performance and endurance are typical for students with this level of excitement. For students with a low level of excitation is characterized by weak and delayed reaction to the excitement quickly achieved protective inhibition, slow inclusion in work, workability and low labor productivity; high fatigue; low working capacity and endurance.

Students with a high level of inhibition, the process of stimulation and stimuli are easily extinguished; rapid response to responding to simple sensory signals, good reaction; high self - control, concentration, vigilance, composure in behavioral reactions.

Students with a low level Ofinhibition have an impulsive response to the stimulus, weak self - control in behavioral reactions, a certain disinhibition, undemanding and condescending to themselves; slow or belated, responding to simple signals [5].

The balance of the nervous process of Studentsdetermines their adaptive abilities, i.e. flexible "tuning" of the processes of excitation and inhibition in relation to the situation.

Table 2 Levels of balance of the nervous system among students

The closer to unity the value of R, the higher is the balance. This value has been detected in 30 students. If the value of R goes beyond the range of 0.85-1.15, then we can argue that a person is unbalanced in his psychological activity.

6 students whose value of R is greater than 1.15, have imbalance in the direction of excitation, that is, the excitation processes do not balance the processes of inhibition. With a significant shift in the balance of nervous processes in the direction of excitation, strong short - term emotional experiences, unstable mood, good adaptation to the new, risky, strong desire for a goal with full return, a military attitude to danger without special calculation, poor immunity to interference are likely.

30 students whose value of R is less than 0.85, havean imbalance in the direction of inhibition, that is, the processes of inhibition do not balance the processes of excitation. With a significant shift in the balance of nervous processes in the direction of inhibition, balanced behavior, a stable mood, weak emotional experiences, good patience, restraint, composure, an unabashed attitude to danger, a real assessment of one's abilities, good immunity to interference are likely [6].

Summing up the research, we can conclude that thestudents of 1st course were identified 3 levels of adaptation: low (13%), satisfactory (70%) and high (17%). A satisfactory level prevails.We found that the levels of adaptation of students coincide with the following levels of psychophysiological features:anxiety, basic characteristics of the nervous system,balanceof the nervous system. Therefore, we can say that the psyhophysiological characteristics of the students have an impact on their adaptation to the educational process.