Time-of-flight secondary ion mass spectrometry was used to studycluster emission of three kind of Si samples with different dimensional features - massivesingle-crystal wafer, pressed pellet made of 60 nm in diameter particles and Iiolograpliical grating consisted of the columns of 200 nm in height and 160 nm in diameter. It was shown that under 25 keV Bi3+ion-beambombardment both nanosized samples exhibited more intense negative cluster secondary ion emission as compared with massive Si sample. The «nanoscale effect of sputtering» was found to be more pronounced for large Si/ clusters with и>7 and for pressed nanopowder pellet, in which individual particles are more isolated than in the columns formed holographic grating.

Study on secondary ion emission (SIE) of silicon has a long story, and a great deal of the experimental data were collected in this field (see, e.g.,1 3 and references cited therein). From the practical point of view, silicon due to its wide and successful application in micro- and nanoelectronics continues to be one of the major objects of sputter depth profiling by means of secondary ion mass spectrometry. From the theoretical point of view, this material is suitable for fundamental study on the mechanisms of neutral and charged cluster emission under the bombardment by mono- and polyatomic (cluster)ion-beams in the range of a several keV. However, there is a lack of experimental data on an influence of the dimensional characteristics of silicon samples, especially nanometric-sized, on their SIE. Before now, the most part of studies has been conducted with gold nanoparticles,4’5 and an amplification of cluster ion emission under the bombardment by different polyatomic primary ions was revealed (so called “nanoscale effect of sputtering”). In this work, we aimed at understanding the difference in SIE of silicon samples depending on their dimensional features.

Three kind of silicon samples were studied. Massive Si sample isa part of single-crystal wafer with (100) orientation and resistivity of 12 Ohm cm (p-type doping by boron) obtained from IPM RAS (Nizhniy Novgorod, Russian Federation).Nanopowder Si sample was prepared by mechanical pressing of spherically-form nanoparticles into a 100-300 pm thickness pellet. Mean diameter ofthe particles produced at Shanghai Yao Tian New Material Co. Ltd (Shanghai, China) by plasma arc technique is estimated to be 60 nm with a density of 1.36 g cm"3and the bulk oxygen content lower than 2 at.%. Holographical grating sample consisted of the columns of 200 nm in height and 160 nm in diameter was fabricated at AMO GmbH(Aachen, Germany) by chemical etching of (100) single-crystal silicon wafer of 2 mm in thickness.

The SIE study of the above-mentioned Si samples was carried out at IPM RAS using a time-of-flight secondary ion mass spectrometer TOF.SIMS-5 by ION-TOF (Munster, Germany). The instrument operates in dual-beam mode employing Continuousl keV/80 nA Cs+ ion-beam for the sputtering and pulsed 25 keVBi3+cluster ion-beam for the probing with 45° incidence angles for both beams.In eachexperiment, the sputter ion-beam was scanned over an area of 250x250 pm2 during 1 min to eliminate surface contaminations. Then, the probing ion-beam was used for massspectra acquisition within an area of 40x40 pm2, that is ca. 2.5 % in square around the center of sputtered zone. Both positive and negative secondary ion mass spectra in the range up to 1000 m zwere collected. In this work, only negative massspectra are discussed. In our opinion, they are more informative since, in contrast to the positive ones, were not "polluted" by heavy Cs-contained secondary cluster ions originated from the preliminary ion-beam cleaning of the samples surface by Cs+ bombardment.

Representative negative mass spectra of the Si samples measured under the steadystate conditions, where the variation of signal intensities versus the time of measurements was negligible, are presented in Figure !.Besides characteristic Si„ cluster ions, where n is a number of silicon atoms in cluster, the spectra contain the peaks of electronegative contaminations (C, O, OH, F, Cl and hydrocarbons), different oxide and hydroxide Si clusters. In our experiments, the maximal //-number for massive Si (Figure la) was found to be 11, while for nanopowder Si (Figure lb) and holographic Si grating (Figure lc) these numbers were 17 and 16, respectively. It is interesting that Ninomiya et al.3 in their study on positive secondary ion emission of massive Si samples under large Ar+ cluster ion bombardment also observed Si/ clusters up to zz =11.

In Figure 2,the intensities of 28Si7A (n = 2-11) peaks of nanopowder pellet and holographic grating scaled to the intensity of the corresponding peaks of massive Si sample are shown. One can see that the intensity of Iargesilicon clusters, starting from w>7, become greater for both nanosized samplesas compared with massive Si, andthis difference is more pronounced for nanopowderpellet. It should be mentioned that all mass spectra presented in Figure 1 were acquired under the same experimental Conditionsincluding the potentials of an electronic multiplier and the coefficients of amplification/discrimination of the registration system of a TOF.SIMS-5 mass spectrometer. By that reason, the mass-spectral noise observed in Figures lb,c for nanosized samples in the mass range higher than 300 ru/z can be also attributed to the cluster secondary ion emission, but not to the apparatus artifacts of the measurements. 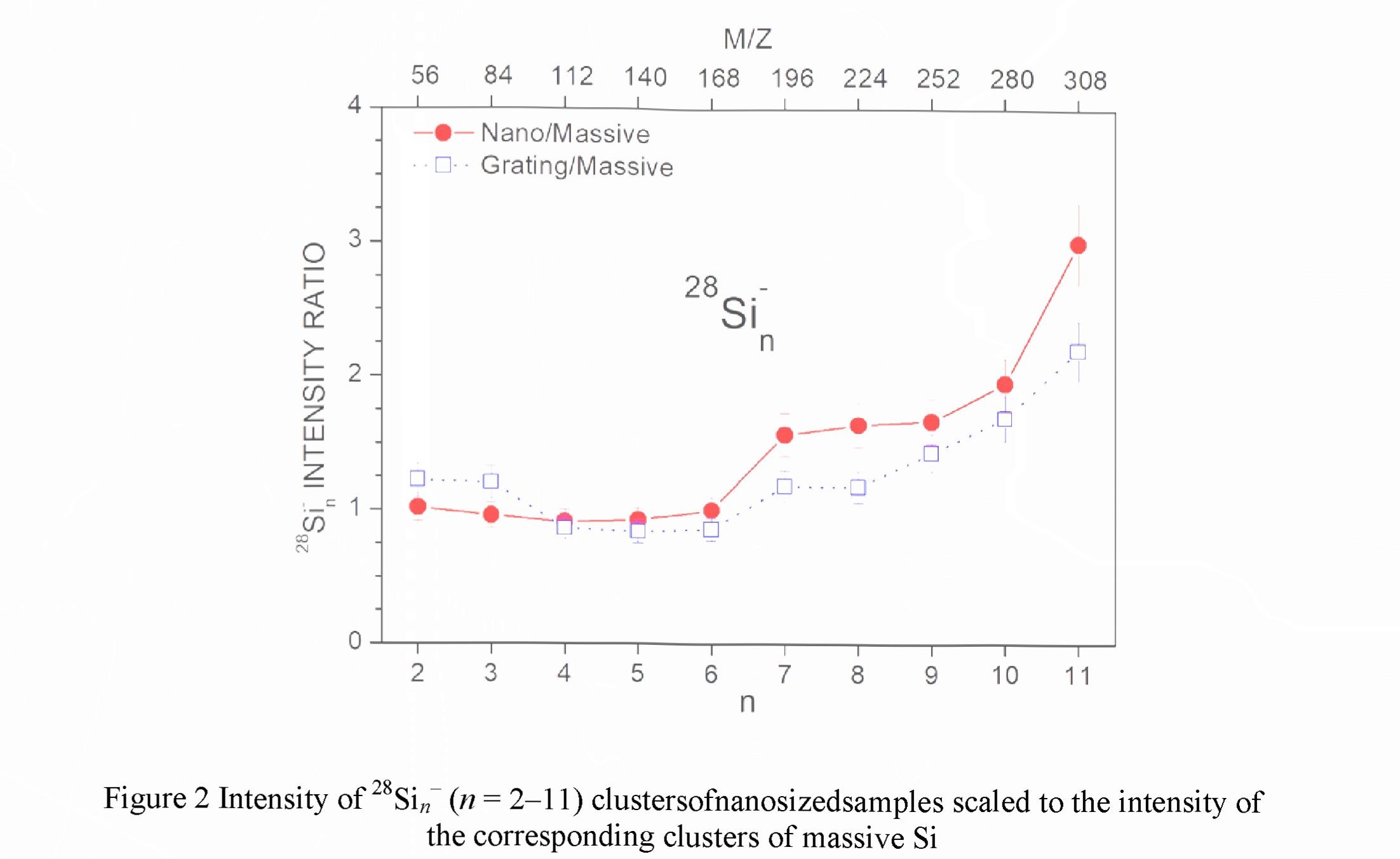 In Figure 3a,the total ion intensities calculated for each sample in the mass interval ЛЛ/ = 56 amu within the mass range from 0.8 to 400 m/z are presented in the histogram form.Each mass interval, starting from the second one, includes two peaks of the main isotope Si cluster ions (the first interval, from 0.8 to 57 m/z, includes atomic Si- and Si2~peaks).Up to 169 m/z (in the initial three mass intervals), the difference in total ion intensity between massive and nanosized samples is rather small. However, for heavier masses the nanosized samples exhibitmore intense SIE, especially in case of nanopowder pellet.In Figure 3b we presented these data scaled to the corresponding intensity of the mass intervals of massive silicon.One can see that for m z> 300 the scaled total ion intensities of nanosized samples surpass the similar data of massive Si more than in an order of magnitude.

In the first approximation, the peak intensity In of Siliconcluster secondary ions composed of n individual atoms can be presented as

where Yn is the cluster sputter yield, i.e. an average number of clusters ejected off the sample per incident primary ion, (3n is the negative ionization probability, i.e. the fraction of the sputtered cluster flux that is ionized, and /Vis the atomic density of silicon in the sample to be sputtered. Of course, this is very schematic approximation, which leaves out of account in full measure the complexity of the processes occurring during cluster secondary ion emission

particularly under polyatomic (cluster) ion bombardment. However, basing of this factorization one able analyzing and discussing the data obtained in this work.

The atomic density of massive Si sample is higher than that of nanosized samples. It means that a greater number of atoms are involved in the sputter process in massive Si as against nanosized samples. However, an efficiency of sputtering, especially for the large (“populated”) clusters, with bigger zz, should be higher for nanosized samples since for nanoparticles, even not fully isolated as in our experiments, more favorable conditions for the development of nonlinear collisions cascades inside these particles are realized. Besides, the channels of energy dissipation of the bombarding ions within the volume of each particle are limited,which results in higher density of energy released in this volume. In the upshot, an amplification of cluster SIE is observed, that is “nanoscale effect of sputtering” (see Figure 2, 3).Such effect is more pronounced for nanopowder pellet because of the particles in this sample are more isolated than in the columns formed holographic grating.In our opinion, the ionization probability /?„ of the clusters emitted from nanosized samples is higher as against massive ones since the charge formation and/or exchange processes mainly occur in the surface and near-surface region of nanoparticles possessing greater surface energy and the ratio of surface/bulk atomic concentration.lt should be noted that at present time the understanding of ionization phenomena responsible for the charge formation of emitted cluster (or its survival) is at rudimentary stage, and detailed discussion of such topic is beyond the scope of the present article.

We experimentally showed that nanosized Si samples in the form of pressed pellet made of ca. 60 nm in diameter individual particles and holographical grating consisted of the columns of 200 nm in height and 160 nm in diameter under 25 keV Віз+ ionbeambombardment exhibit more intense negative cluster secondary ion emission as compared with massive Si sample. The “nanoscale effect of sputtering” is more pronounced for large Si„ clusters with zz>7 and for pressed nanopowder pellet, in which individual particles are more isolated than in the columns formed holographic grating.Our further studies will aim clarifying the dependence of this effect on the size, type and degree of isolation of nanoparticles, which allows more efficiently using the nanoscale sputtering for the perfection of our sputtering-type high-current sources of homogeneous and heterogeneous cluster ions.6’7