The given article is devoted to the consideration of the necessity and the possibility of application of innovative energy-saving technologies in autonomous heating systems allowing for the decrease of the detrimental influence of the combustion-generated wastage upon the environment, and for the reduction of expenses on the production of long-burning solid-fuel boilers.

The article is aimed at a more detailed description of the technical peculiarities of the proposed ergonomic solutions with a view of attracting the attention of ecological engineering specialists and investors to the topicality of the given propositions.

The analysis of the technical components was conducted in terms of the comparison of the traditional means of heating and their innovative counterparts.

According to the results and the conclusions of the research conducted, the application of energysaving technologies in autonomous heating systems is still a topical issue that deserves the attention of contemporary ecologists and engineers.

Coal is the largest source of energy in the contemporary world, being the means of power generation and providing the basis for the production of heat and light on a global scale. At the same time, there is a deeply ingrained public misperception that coal is a dirty fossil fuel and coal-mining industry is an obsolescent branch of industry characteristic of the Machine Age.

Nevertheless, the modern technological progress destroys this myth, providing vivid examples of highly efficient use of coal and systemic solution of ecological issues.

One of these vivid examples is the innovative long-burning solid-fuel boiler with the pyrolized effect (henceforth LSB) for autonomous heating systems which makes it possible to considerably economize the fuel resources, to reduce the ecologically detrimental emissions into the atmosphere, and to decrease the customers’ heating expenses [1].

It is widely assumed that the power engineering of the future is connected with renewable resources. But it is within the realm of possibility that coal, oil and gas will maintain the dominance if the contemporary technological solutions contribute to the elimination of the carbon dioxide emission.

The LSB technology makes it possible to considerably reduce the emissions of contaminants into the atmosphere. This model is based on the principle of upper combustion of the fuel - the coal is burned on the surface, slowly smouldering [2].

The following figure demonstrates the technical peculiarities of the boiler.

Thus, the technology of the long-burning boilers is based on the phenomenon of pyrolysis.

One of the most common types of this phenomenon is the rapid pyrolysis which is characterized by the high-velocity and oxygenless supply of energy to the source material.

Here are some basic peculiarities of the process of pyrolysis:

The capacity tor the generation of an enclosed and incessant technological process of production.

Relative «cleanliness» of the final products of pyrolysis, achieved due to the absence of the features of resinification. 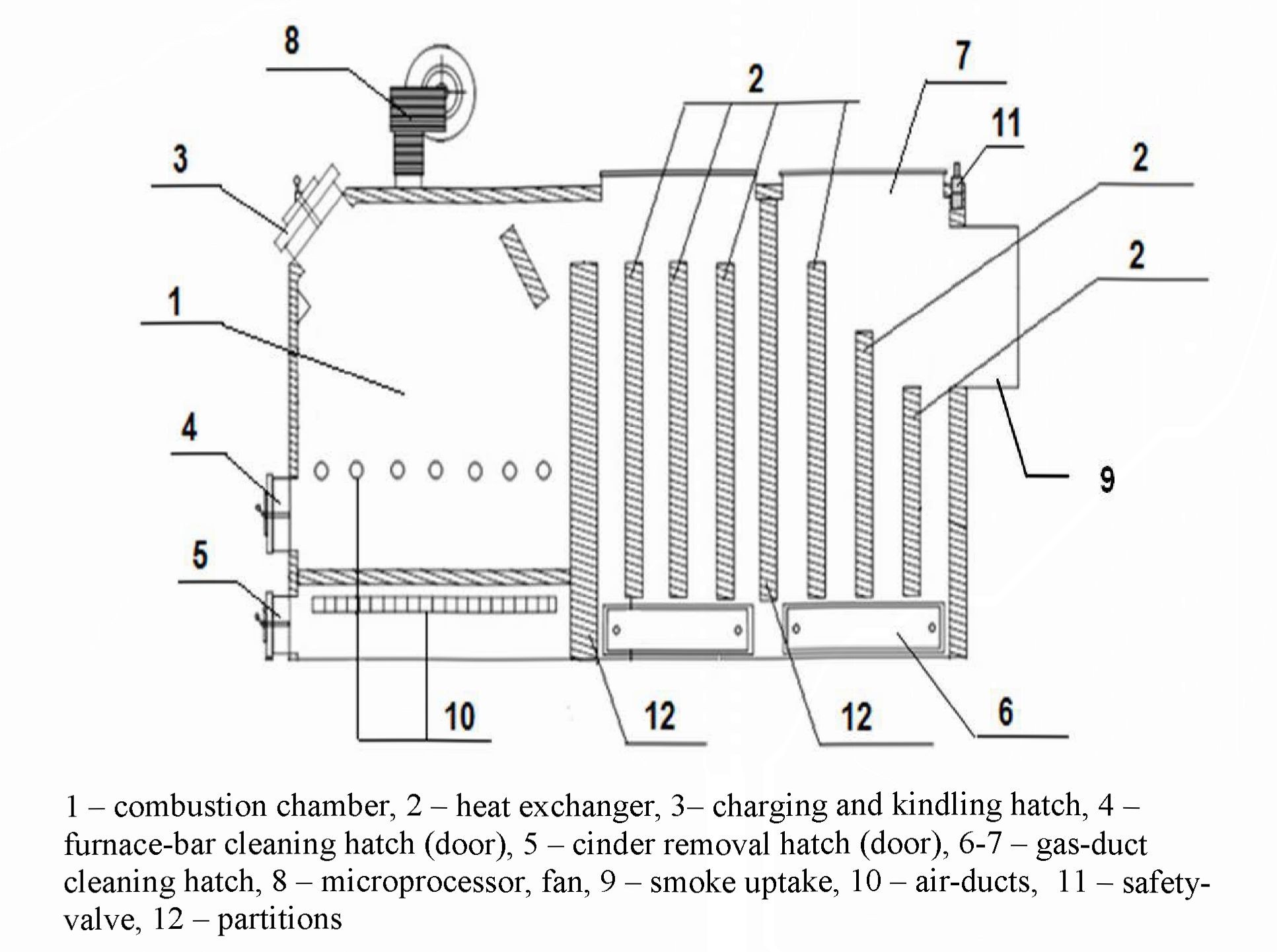 Minimal energy capacity of the given process, as compared to other types of pyrolysis.

The given process is accompanied by the emission of a large amount of heat energy (exothermic reactions surpass the endothermic ones in the course of the process of rapid pyrolysis).

The gaseous product of the pyrolysis of black coal is the so-called pyrolytic gas, which represents the mixture of combustible gases and various chemical compounds.

In many countries pyrolytic gas is currently used as an alternative source of heat energy.

Inside of an LSB, the pyrolytic gas enters the combustion zone and is burned there emitting the heat energy. This technological solution increases the coefficient of performance of the boiler.

While this technology is considered to be quite new for us, in some European countries pyrolytic gas became an ordinary fuel a long time ago. Apart from that, pyrolytic gas, as well as coal-tar resin, can be used for the acquisition of various chemical compounds.

Thus, the pyrolytic gas may serve as the means of acquisition of such substances as phenyl hydride and phenol.

The implementation of this innovative technology has the following advantages:

Any comparison between LSBs and other boilers is demonstrative in that this technology reduces the coal expenses twice under other equal conditions.

Chart 1. Comparison between LSB coal consumption and that of other popular models.

LSBs effectively perform the functions of such expensive devices as “cyclones” (up to 1.5 million tenge) which are used for the reduction of the amount Ofpollutants emitted into the atmosphere [3].

Cyclones are the most common means of gas cleaning widely used to separate the dust from the gases and the aspiration air in various branches of industry: ferrous and non-ferrous metallurgy, chemical and oil industry, building material industry, power engineering etc.

Cyclones contribute to the gas purification with the efficiency of 80-95%, cleaning the dust particles in sizes up to 10 mcm.

As has been said, LSBs do not require any additional dust collectors, as compared to other boiler-rooms equipped with dust collectors, whilst the concentration of noxious gases in the LSB emissions is considerably smaller in that the cyclones collect only the solid particles.

According to the recently conducted instrumental measures, the ecological safety of the LSB discharges into the atmosphere has been confirmed.

Table 1. Comparison of calculated and instrumental emission densities (in tons)

The analysis of the given table demonstrates that the factual LSB discharges into the atmosphere are 100 times smaller than the calculated emissions of boilers using the same amount of coal.

Manufacturers of LSBs are planning the development of a removal technology that will make it possible to utilize ash-and-slad wastes from boiler-rooms, with a view of making the process of coal use ecologically safer.

Current projects on the development of the energy-saving technology on the basis of long-burning boilers with the pyrolized effect are regarded as expedient from the economic, social, and ecological perspectives.