Kazakhstan’s border policy as a basis for ensuring interethnic harmony

Abstract. The state border of the Republic of Kazakhstan is one of the first institutionalized forms of ensuring security and interethnic peace. The article examines the historical role of borders as a social space, as a tool for creating cultural and ethnic identity and notes the special significance of the border policy of the Republic of Kazakhstan in ensuring interethnic peace.

Modern border area studies reflect the continuity and changes of scientific idea in the conceptualization of social space. Although space can be abstract and absolute, it is the borders that "fix" it and turn it into a concrete and understandable social and geographical area. As a result of this awareness, the study of borders has transformed from an interest in the study of formal state borders and ethnocultural territories to the study of borders at various socio-spatial and geographical scales, from local and municipal to global, regional and supranational levels. In addition, the steady growth of borderline research can be partly explained by the emergence of discussions about globalization in the late 1980s and early 1990s.

For quite a long time, there have been predictions of a "world without borders" in which information technology, cyberspace, and the freedom of movement of capital and people would make political borders atavistic. However, the Covid-19 pandemic has made obvious adjustments to this type of forecast in the short term, since borders are not just "visible lines" in space or on a map: they are complex social structures that are assigned to various functions. A world without physical/geographical borders seems utopian. No territory can be administered unless it is clearly delineated. Humanity lives in a world full of "compartments" that allow us to collectively manage our lives.

It is important to note that border studies are rooted in cultural deterministic traditions (inspired by the works of Johann Herder, Johann Fichte, Georg Hegel, and others), in which the emergence of national states and their borders was understood as an expression of historical necessity or "the will of God".

Modern nation-states continue to understand borders as the highest form of effective social organization in the world system and remain the basic, if not always the main sources of political, cultural, and social identity. The main classical studies of scientists such as F. Ratzel, R. Hartshorne, L. Christoph and J. Mingi emphasized the evolution of the border significance. According to L. Christophe, the function of borders as legal institutions is of primary notion: "In order to have a certain stability in the political structure, both at the national and international level, a clear distinction between the spheres of foreign and domestic policy is necessary. The border helps to understand and maintain this distinction."

The border simultaneously serves to meet two basic needs of people – protection from external and internal threats, and delineation of territories that belong to specific political, cultural and social groups. These goals are achieved through the process of socialization at the initial level – in the family, school, and then through propaganda tools, which ultimately lead to the formation of a person's self-identification within a certain territory, culture, and political system.

According to D. Newman and A. Paasi, borders are also necessary to determine not only the internal identity, but also the external identity of states recognized by the international community for their right to maintain relations with other countries.

In many ways, the tradition of studying borders, state-oriented and political geography in general is preserved as a result of historical experience and is updated by current events – redrawing the world map, border conflicts, unrecognized states, etc.

One of the defining characteristics of the post-cold war world is the spread of a discourse about "limitlessness" and the decline of nation-states, which were the driving force behind national self-determination processes in Central and Eastern Europe. These sovereignty restoration movements changed the political map of Europe and the world, created new borders, and dealt a blow to multinational federations such as Yugoslavia, Czechoslovakia, and the USSR. At the same time, the desire for national statehood brought devastating wars and violent episodes of ethnic cleansing with it, which caused serious damage to inter-state and inter-ethnic relations.

History also knows many other ethnic differences between young states that arose on the basis of territorial claims, religious and ethnic intolerance, which led to prolonged confrontations. For example, the Indo-Pakistani conflict that broke out in 1947, which turned the territory of Kashmir into a smoldering hotbed of inter-ethnic and inter-state tensions lasting more than seven decades. The situation is aggravated by the presence of nuclear weapons in the countries participating in the conflict.

Although the interdependence of modern states due to the development of the market economy system and the processes of globalization have complicated the picture of the world. The continuous (re)construction of borders based on forms of socio-political organizations and nation-building remain a central problem in border studies.

Territorial and Border Policy of Kazakhstan, Ethnic Groups and Security

Central Asia has often been viewed through a security lens since the Great Game when the British government was concerned about the threat that Russian expansion in Central Asia might pose to India. Further, during the Soviet period, there were concerns about the large-scale spread of Islam in the region. At the present stage, researchers note the risks of conflicts arising as a result of lack of water resources, the spread of extremism, etc.

Thus, Central Asia is often portrayed by the media and experts as a region that is threatened by many crises and instability, as well as inter-ethnic conflicts.

Inter-ethnic peace, harmony and unity in modern Kazakhstan society are provided by various mechanisms and institutions. The Assembly of People of Kazakhstan, as a consultative and advisory body under the President, is a traditional conductor of interethnic harmony and tolerance in society, which at the same time integrates ethno-cultural associations. However, before the idea of creating the Assembly, which was announced by the First President of the Republic of Kazakhstan, Nursultan Nazarbayev, in 1992, at the Forum of the People of Kazakhstan, interethnic harmony and socio-political stability were laid primarily exclusively by legal mechanisms.

Historically, inter-ethnic peace, safety, and social harmony have been difficult for states to maintain during a period of large- scale changes in their traditional paradigm associated with the departure of long- dominant forces in the country or region. In the case of Kazakhstan, it was the time of the Soviet Union collapse. Experts point out that the instability stems from safety gaps associated with changes during the change of government.

Since Kazakhstan gained independence, the young Republic has faced strategic territorial and border issues that other members of the former Soviet Union have also faced, in addition to a number of socioeconomic and political issues.

Given that the Republic of Kazakhstan is the exclusive owner of a significant land (over 13 thousand km) and water (3 thousand km) borders, the systematic process of delimitation and demarcation of the border, which began with the adoption of the Law "On the State Border of the Republic of Kazakhstan" in 1993, allowed the country to avoid inter-state and intra-state ethnic conflicts at the dawn of independence.

One of the fundamental principles of Kazakhstan's experience in conducting fieldwork on the delimitation process was the principle of "sensiblization", that is, a deep understanding and sensitivity to the peculiarities of the historical and economic nature of the life of residents of the border areas. Experience around the world shows that this not only helps prevent conflict between residents, but it also eliminates any myths that may arise among local residents after the border is established.

The ethnic structure of the population of Kazakhstan is quite a motley picture. The ethnic composition of the Population differs significantly by regions and cities of Kazakhstan (see Table 1).

According to official statistics, in most border regions, except for the Northern ones, the titular ethnic group significantly prevails in number. 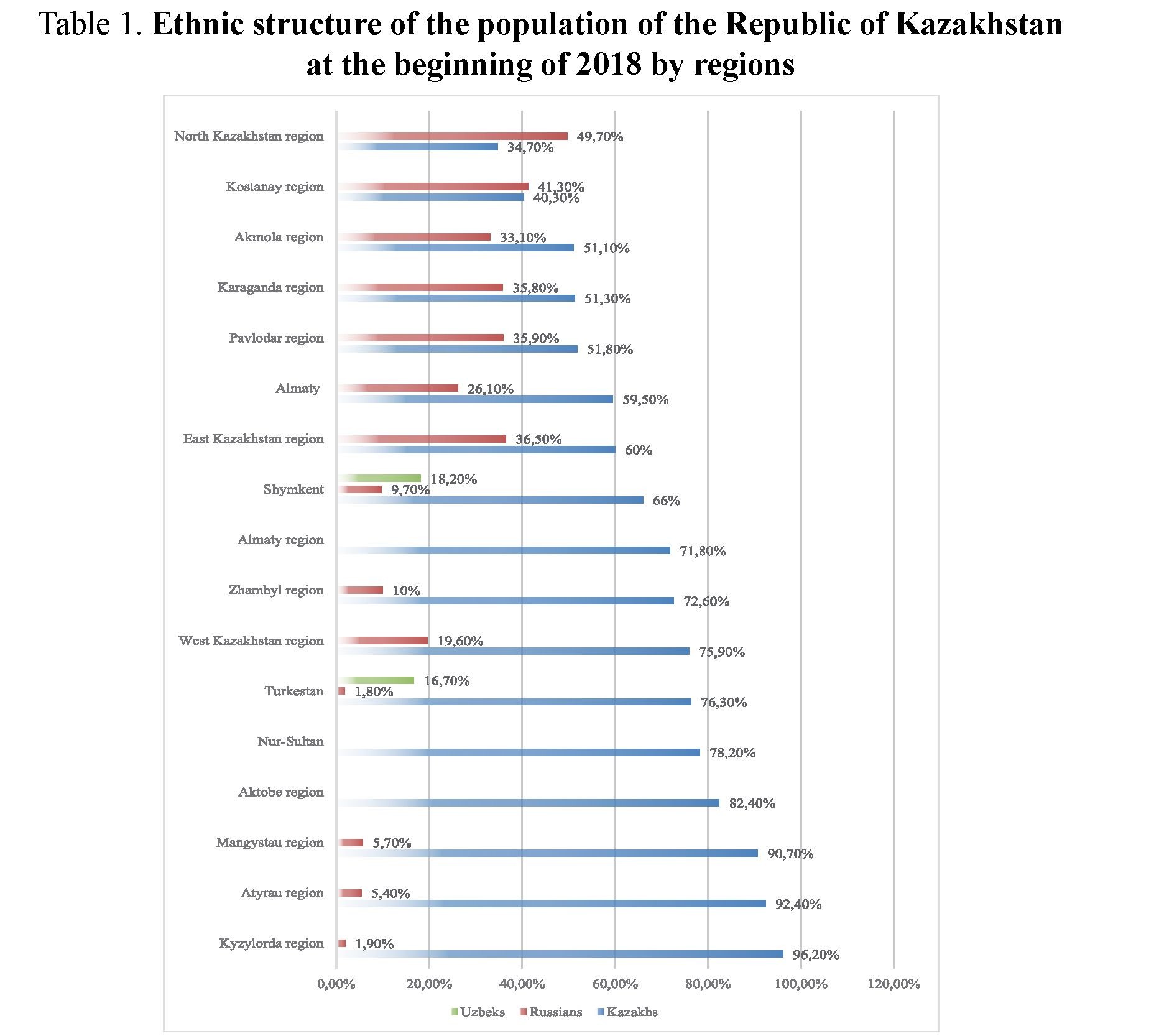 However, when analyzing the ethnic composition of the border area population, experts mainly attach more importance to the local level rather than the regional one, where the ratio under consideration is often quite comparable. It is such cases when an increase in ethnic and social tension is fraught with the actualization of territorial claims.

The existence of disputes with neighboring states, even at the local level, is fraught with ethnic and international conflicts, the emergence of open confrontations and the formation of uncontrolled zones. Therefore, the overall approach of Kazakhstan to the processes of defining borders with neighboring states was based on a three-stage strategy: coordination, topographic mapping and legal registration.

Kazakhstan's long and successful border relations with China, which stem from the original Treaty of the 19th century, should be highlighted separately. Since then, five more agreements have been concluded that have allowed for the settlement of territorial and border issues, taking into account the interests of both countries. The demarcation of the China-Kazakhstan border was officially completed in 2002.

There was also a process of delimitation of borders with other neighboring; that were former members of the USSR. Working with neighbors was based on the principle of maintaining the territorial status quo at the time of independence (in accordance with Uti possidetis - the legal principle of public international law).

Traditionally, the way borders are managed affects stability at the global and local levels. Proper administration of buffer zones ensures safety and reduces the risk of tension.

Experts agree that borders do not just "appear", but are the result of a long border process. Therefore, it is difficult to overestimate the historical role of the successfully implemented territorial and border policy of Kazakhstan.

The settlement of border issues not only helped to preserve safety, as well as maintain friendship and good-neighborliness with border states, but also laid the foundation for inter-ethnic unity and social harmony within the country.