Abstract. The interaction of the Republic of Kazakhstan with the Organisation for Economic Co-operation and Development (OECD) is one of the key strategic priorities of the country. Kazakhstan is interested in joining the Organization, as well as in transition to the standards of developed countries of the world. The article describes the role of Kazakhstan in Central Asia and work accomplished in the framework of cooperation with the OECD.

Kazakhstan is one of the first countries in Central Asia that began to closely work with the Organisation for Economic Cooperation and Development (OECD) signing the OECD Country Cooperation Program.

Kazakhstan has entered a new historical period. Our main goal is to become one of the 30 most developed countries in the world by 2050. The nation’s “100 Concrete Steps” plan is a new institutional framework not only for the economy, but also for the state as a whole, which will make it possible to pass all the difficulties and trials on Kazakhstan’s entry into the thirty developed countries of the world.[1] In this regard, Kazakhstan and the OECD have established close relations in the light of our country’s aspiration for the top thirty most developed countries.

The OECD’s main objectives are to improve the global economy, promote world trade, and social well-being of people. Today, the member countries of the OECD, which produce more than 60% of world GDP, demonstrate fundamental development indicators. All participating countries have gone through a deep modernization, have high rates of investment, research, labor productivity, business development, and living standards.

There are 9 major indicators of countrywide progress of Kazakhstan in comparison with the OECD to be noted: 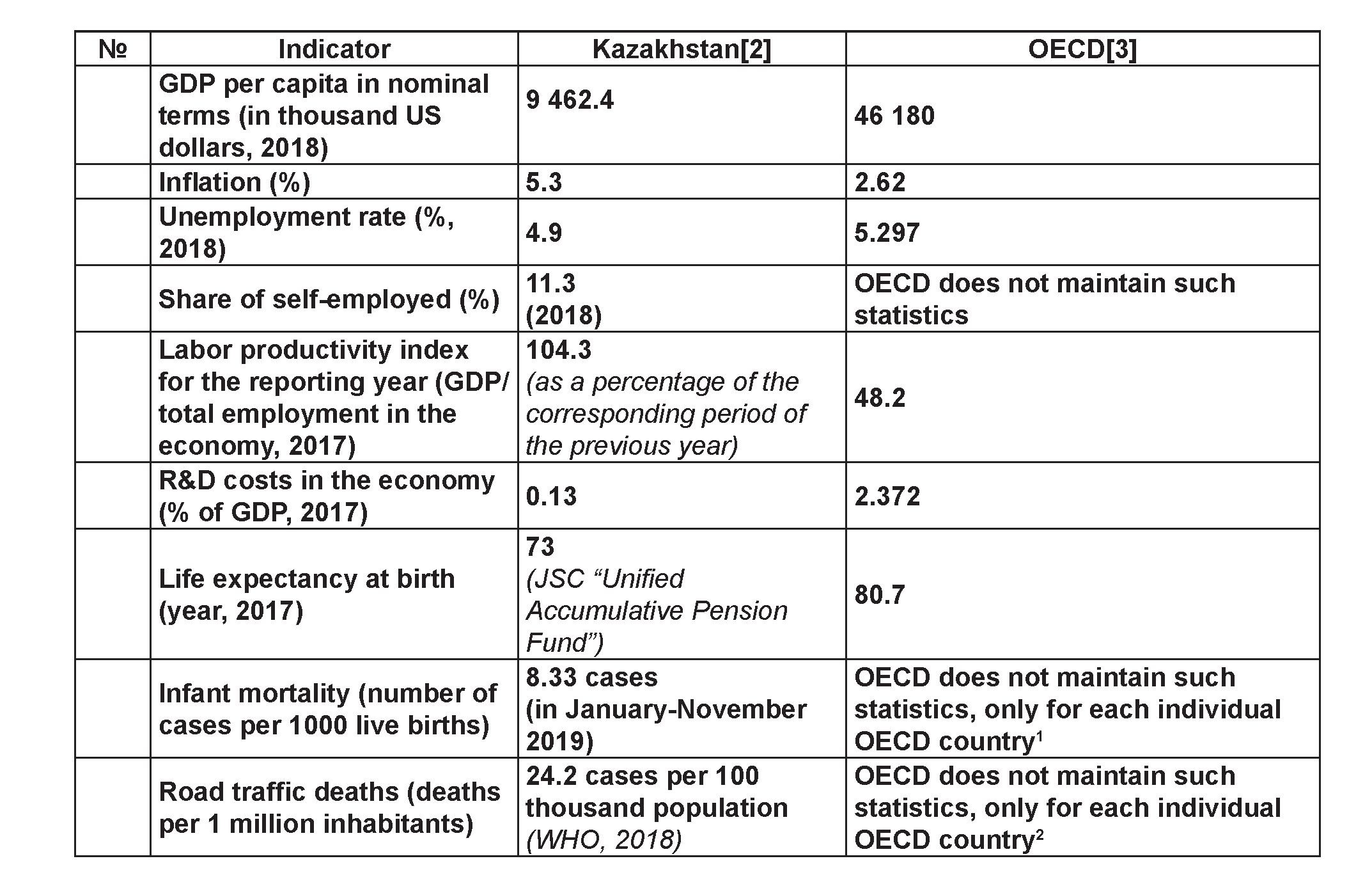 In order to achieve the indicators that the OECD countries demonstrate today, the First President of Kazakhstan Nursultan Nazarbayev within the framework of the “Five Social Initiatives” and his Message of 2018 defined clear guidelines for the social modernization of society: increasing spending on education, science and healthcare to 10% of GDP; improving the quality of education; ensuring access to medical care; increasing the efficiency of state bodies; and strengthening anticorruption measures.

Cooperation between the Republic of Kazakhstan and the OECD

Six regional programs are being implemented within the framework of the OECD’s Global Relations Secretariat[4]:

In this regard, the ECP, an initiative of the OECD and the OSCE on increasing investments and competitiveness in Central Asian countries, was launched in November 2008 in Berlin, Germany. It was later transformed into the OECD Eurasia Competitiveness Program.

The activities of the ECP are to support the development and implementation of a policy to increase competitiveness in the Eurasian region, which includes 13countries of Central Asia, the Caucasus and Eastern Europe by encouraging Eurasian countries to join OECD policy standards and other instruments, identifying political barriers to competitiveness and supporting capacity building in the field of development and implementation of policies aimed at improving competitiveness: Kazakhstan, Afghanistan, Kyrgyzstan, Tajikistan, Mongolia, Turkmenistan, Uzbekistan, Armenia, Azerbaijan, Belarus, Georgia, Moldova, and Ukraine.

Kazakhstan is one of the four countries of the world (Kazakhstan, Morocco, Peru, Thailand), which the OECD Country Cooperation Program (Memorandum) was signed with. The Country Program allowed Kazakhstan to carry out significant structural and institutional reforms based on OECD Secretariat of the ECP. best practices and standards after the results

The economy of Kazakhstan is one of the fastest growing economies in Central Asia. Over the past few years, Kazakhstan has strengthened its ties with the OECD: expanded cooperation with OECD committees and bodies such as the Investment Committee, the Committee on Agriculture and the Committee on Industry, Innovation and Entrepreneurship. Kazakhstan actively participates in the OECD Eurasian Competitiveness Program, namely, as a co-chair of the Central Asian initiative of the Eurasian Competitiveness Program and other programs, such as the Anti-Corruption Network for Eastern Europe and Central Asia, in the regional program of the OECD Anti-Bribery Working Group during international business operations, as well as the OECD political dialogue on development based on the extraction of natural resources as a coleader in the work on fund consolidation and cost sharing.

Kazakhstan is interested in working with the OECD in these and other policy areas, using this cooperation as a means of supporting country reforms. In light of the above, on April 18, 2014, the OECD decided to invite Kazakhstan to sign the Country Program, under which both parties intend to promote Kazakhstan’s country reforms in areas such as the development of sustainable economic growth, taking into account social integration, strengthening the competitiveness and diversification of the domestic economy, increasing the efficiency of state institutions, as well as achieving better environmental results. In light of this, the parties agreed to conclude this Memorandum.

During the conclusion of the Memorandum, it was decided to join the 29 OECD legal instruments, of which Kazakhstan has already joined 20 (12 recommendations, 6 declarations, 1 convention and 1 action plan). At the same time, Kazakhstan works with 37 OECD committees and working bodies. As part of the work with the committees, 13 reviews were conducted as part of the first stage, as well as 5 reviews as part of the second stage of the Country Program. Currently, work is underway to conduct another 10 OECD reviews in Kazakhstan within the Country Program (stage 2) and new Memorandum.

Generally, Country Program aims to assist Kazakhstan in implementing country reforms in various fields. Cooperation between the parties will focus on a number of key areas:

It is worth noting that there are substantial reforms and changes that have been implemented after conducting the OECD reviews:

Within the nation’s “100 Concrete Steps” Plan:

Out of the 54 green growth indicators:

Education and advanced training [16][17] (close to be completed)

Competitiveness and business climate[18][19] (in process)

As mentioned above, Kazakhstan’s engagement in the OECD has meant it has been subject to conduct reviews governed by the OECD committees in such areas as public administration, education, employment, healthcare, civil service, investments, environment, economics, etc. Kazakhstan has already made some changes to its legislation and policies, bringing them in line with OECD standards.

Harmonization with OECD best practices requires an assessment of the possible socio – economic consequences for the country, taking into account the reforms already carried out, assessing the prospects and threats of cooperation with the Organization.

Since the beginning of 2017, the economy of Kazakhstan has embarked on a path of recovery growth, an important role in this has been played by OECD standards and recommendations implemented in such government policy documents as the Nation Plan - 100 steps to implement five institutional reforms, the Concept of Family and Gender Policy until 2030, State Program for the Development of the Agro-Industrial Complex of the Republic of Kazakhstan for 2017-2021, the Program for Attracting Investments “National Investment Strategy”, National Export Strategy, Strategic Development Plan of Kazakhstan until 2025.

Kazakhstan has benefited from such changes in different ways. For instance, the implementation of the OECD recommendations in various areas of economic policy has made it possible to timely create the institutional framework to accelerate business activity, modernize corporate governments of state companies, to improve regulatory politics, and increase the autonomy in the education system.

There are also other benefits to Kazakhstan:

What’s next for Kazakhstan?

The current format of cooperation enhances the country’s political credibility and reputation as an economically developed and committed state to democratic reforms. It is important to specify our priorities in the OECD, to enhance the image of Kazakhstan as a country focused on the quality of policies. Focus on high quality, systematic and content work with key committees and OECD decision-makers will position Kazakhstan as a professional and goal- oriented player.

Despite the fact that Kazakhstan has made significant progress in reforming the main sectors of the economy, some sensitive sectors remain, such as the environment, taxation, anti-corruption, public administration, social policy, which show a high gap in performance compared to OECD countries, which may affect the decision of the Council to accept Kazakhstan as a member of the Organization.

In spite of the possible difficulties that Kazakhstan may encounter when and after joining this organization, conducting qualitative, structural, constitutional and political reforms based on the best world practices, it has all the prerequisites to become one of the OECD members.

Central Asian countries are also OECD partner countries and are of particular interest to the Organization. Kazakhstan is a leader in the interaction and implementation of significant projects with the OECD.

Confirmation of this is the holding of the first exit session of the OECD Eurasia Week 2017 in Almaty.

We do not exclude the possibility that Kazakhstan can be considered as the OECD representative office in our region. It is necessary to use our leadership and become a hub for the transfer of OECD best practices and standards throughout the Central Asian region.