The explanatory factors of corruption in the developing world

Nowadays corruption has become the problem of the universal magnitude. Countries around the world are adopting the various strategies in order to address this issue. The World Bank identifies corruption as the “is the abuse of public or corporate office for private gain” [1]. Other international bodies also define corruption in the similar way. For instance, OECD identifies “Corruption is active or passive misuse of the powers of public officials (appointed or elected) for private financial or other benefits” [2]. While, United Nations defines it in the following way: “Corruption is the abuse of public office for personal gain, directly or indirectly”[3].

Starting from the 1995 the prominent NGO Transparency International has began the publication of its annual report on the level of corruption around the world. The Corruption Perception Index developed by this NGO serves as on one of the reputable indicators of determining the level of corruption in the particular country. The governments around the world try adopting strategies and policies in combating the corruption with the hope that efforts of the country will be reflected in CPI annual rankings.

In this study the proposed research questions is: What factors influence on the level of corruption in the developing countries?

I have used the paper “Determinants of corruption in developing countries” by Shabbir and Anwar as the framework for my study [4]. Generally, scholars used the crosssectional dataset for 41 developing counties for the year 2007 in order to identify key variables that influence on the high level of the corruption. The methodology in my study replicates the Shabbir and Anwar’s work, with the difference that I have collected dataset for 75 developing countries, for the year 2017 and have additionally included into the model 3 independent variables that were not present in the research paper of the scholars. I will present the methodology for my paper more specifically in the next section.

I have collected the cross-sectional dataset for the year 2017 in order to make comparison of developing states. The year 2017 was chosen due to the availability of the most recent and detailed data on that period. Developing countries are chosen on the basis of World Bank classification on the income level. I have chosen to analyze the countries, which are classified by the World Bank as low-income, lower-middle income and upper-middle income economies. All these countries are classified as developing nations since they have potential of moving into the last category of the high-income economies. Altogether, the initial set of developing countries constituted 138 countries. However, during the collection of data, I found that many countries were missing the information on the variables of interest. Thus, I have dropped the countries, which were missing the many pieces of information. As a result, final dataset includes 75 developing countries.

In this study the dependent variable is the level of corruption, which is operationalized through the Corruption Perception Index (CPI). This index is elaborated by the Transparency International on the yearly basis. Generally, CPI represents the result of the surveys, which were conducted among the expert community. Various international organizations carry out the surveys, including the Freedom House, Economic Intelligence Unit, United Nations, etc. Consequently, the results of surveys are combined by the Transparency International and presented to the public. According to the Transparency International’s definition CPI ranges on the scale from 0 to 100, where 0 is highly corrupt and 100 is very clean. However, similar to Shabbir and Anwar, 2008 I have reversed the data on CPI scale for the purposes of the convenient interpretation. In this study the CPI score of 0 implies very clean, whereas 100 indicates the highly corrupt.

EcFreedom – is the Economic freedom index, which combines 12 types of freedoms, including business freedom, labor freedom, monetary freedom, trade freedom, financial freedom and others. The index is elaborated by the Heritage foundation. The data on the Economic freedom index was collected from the online platform of the Heritage foundation. The score ranges between 0 and 100, where 0 represents minimum freedom, while 100 indicates maximum level of freedom.

Literacy rate – demonstrates the share of population, who are able to read and write. Ranges from 0% to 100%. I have collected the data on the literacy rate from the World Bank development indicators database. For the convenience purpose, I have used the scale from 0 to 1 with the decimal points indicating the proportion of literate population.

Development level – represents the GDP income per capita adjusted for inflation (constant, in US dollars). I have collected the data on the GDP per capita from the World Bank development indicators database. For the convenience purpose I have transformed the data into the thousands of US dollars.

Income distribution – is measured by the GINI index. The GINI score ranges from 0 to 100, where 0 represents perfect economic equality and 100 perfect economic inequality. I have collected the data on GINI index from the World Bank development indicators database as well as the Globaleconomy.com online database. Similar to Shabbir and Anwar, 2008 I have reversed the data on GINI scale so that 0 implies perfect inequality and 100 indicates perfect equality.

(2) The political model of determining corruption:

Press freedom – is the index that is elaborated by the international NGO Reporters Without Borders. This index measures to what extent journalists around the world are free to express their opinions regarding various issues. The scale of index ranges from 0 to 100, where 0 represents absolute freedom, while 100 absence of freedom. I have collected the data on press freedom index from the website of Reporters Without Borders NGO. Similar to Shabbir and Anwar, 2008 I have reversed the data on Press freedom scale so that 0 indicates absence of freedom, while 100 implies absolute freedom

Islam, Catholicism, Protestantism, Orthodox, Hinduism – are dummy variables, which are taking the value of 1 if the majority of population in particular country is affiliated with this religion, and 0 otherwise. The data on the religious affiliation has been collected from the Central Intelligence Agency’s World Factbook database.

LeaderYears – is the variable that describes how many consecutive years in power stayed the highest political person of the particular country prior to the year 2017. It is measured in the number of years. Depending on the political structure of the country, the different political positions were considered as the unit of analysis. For the Presidential Republics – Presidents, for Parliamentary Republics – Prime Ministers, for Monarchies – Kings, were considered as the unit of analysis. For Federation depending on the strength of executive power the Prime-Ministers or Presidents were considered. I have counted how many consecutive years the particular leader was ruling the county prior to the 2017. The relevant data on this matter were collected through the searching open sources, which include Forbes, Reuters, The Guardian, The UN facts and figures, and other sources.

Generally the intuition for collecting this data is the hypothesis that there is a positive correlation between the period leader stays in power and the perception of corruption. In other words, I expect that the longer the country leader stays in power, the higher is the perception of corruption in the country. This is because long presidential tenures are associated with the political stagnation and consequent practices of corruption.

PartyYears – is the variable that represents how many consecutive years the particular political party was dominating the seats in the parliament prior to the year 2017. It is measured in the number of years. Here it should be noted that due to the fact that some countries in the sample were monarchies without the proper parliamentary systems, no data can be filled for these countries. Consequently, it has resulted in the missing values for the 6 countries. The relevant data on this matter were collected through the searching open sources, which include Forbes, Reuters, The Guardian, The UN facts and figures, and other sources.

PolitStability – is the political stability index that is elaborated by the World Bank. This index measures the perception that government will be overthrown or destabilized. The scale of index ranges from the -2,5 to 2,5, where -2,5 represents weak state, while 2,5 represents strong state. The data on political stability index has been collected from the World Governance Indicators.

All the regressions in the study are conducted through using the robust standard errors technique. This was done in order to address the heteroscedasticity issue. By doing regression on corruption and its economic determinants I have acquired the following results: As it can be noticed from the table above the coefficients

employed individuals need to demonstrate their education qualifications. Consequently higher level of education leads to the corruption. The coefficient on economic freedom is negative and statistically significant in two models. This implies that an increase in the level of economic freedom is associated with the decrease in the level of corruption. Interestingly, the coefficient on level of development of the country

is not statistically significant in all three models. This indicates that GDP per capita does not determine the level of corruption. The coefficient on income distribution is only significant at 10% level in one of the models.

In the model with the political determinants of corruption the outcomes are presented in the following way:

As it can be noticed from the table above, four independent variables are consistently significant across all the models. It worth describing them in more detail. The coefficient on democracy has the negative sign and implies that the higher level of 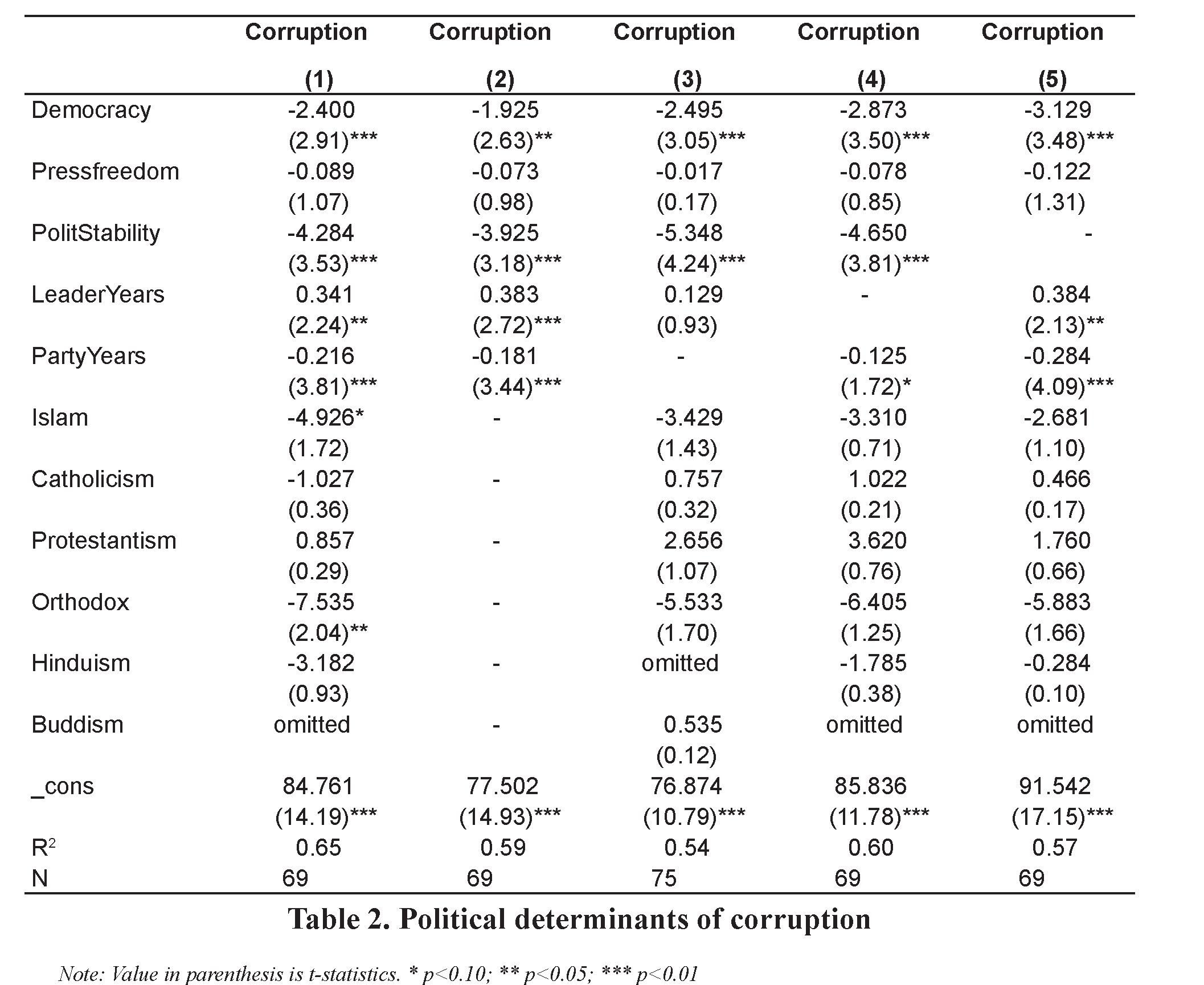 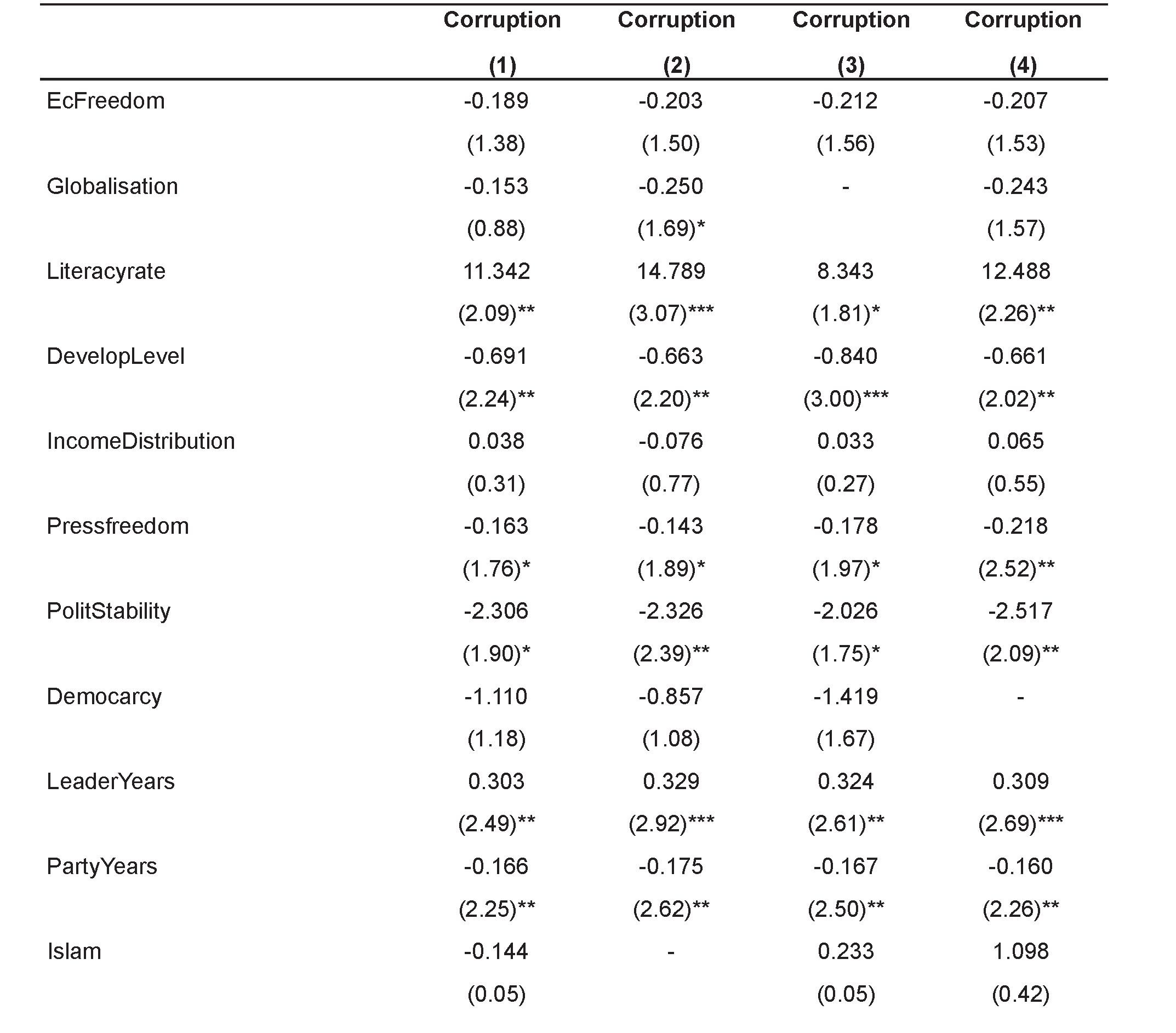 power has the positive sign. This implies that the longer the political leader of the country stays in power the higher is the level of corruption in that particular country. In other words, long tenure dictatorships are expected to increase the corruption level in the country. Furthermore, the coefficient on the years political party dominates the parliament has the negative sign. This implies that the longer party dominates the seats in parliament the lower is the corruption level in the country. This could be explained by the fact that parties that in the long rung develop effective anti-corruption strategies. The coefficients on the variables of religions as well as freedom of press are not statistically significant across majority of models. This implies that religion does not have the effect of the level of corruption in the country, the same is true for the degree for the freedom of press.

At last, I have put together the economic and political determinants of corruption in order to find out which of them has the significant roles in influencing the level of corruption. The results are presented below: 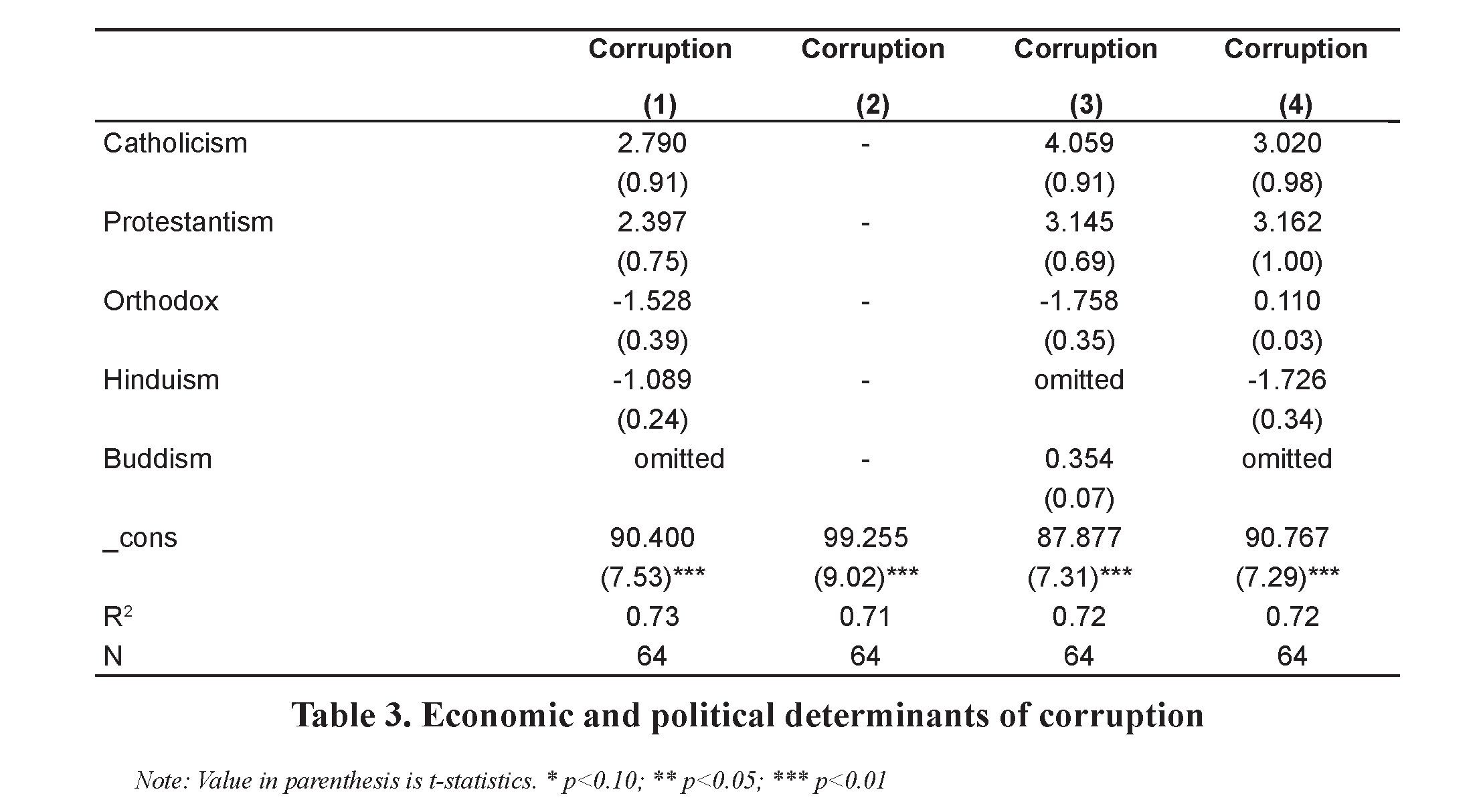 In case the value of VIF exceeds the 10 there could be the problem of multicollinearity. However as it can be noticed from the table above the values of all the independent variables are below the 10. Consequently, it can be concluded that there is no linear association between my independent variables and the constructed model has the explanatory power in determining the level of corruption.

Taking everything into consideration, the findings from this paper imply that developing countries need to provide more freedom for the media resources and particularly journalists, maintain political stability and increase their GDP per capita in order to reduce the corruption level in their countries. Also, countries need to ensure the political pluralism and fair election processes in order to ensure regular political rotation, which consequently contributes to the lower corruption levels in the states.