The pension system and demographic challenges in kazakhstan

Today, an ageing population is one of the most important challenges of our time, under the influence of which the social systems and institutions formed in a previous age must adapt to the new demographic realities. The impact of demographic challenges on the pension policy pursued in the country is determined both by the intensity of demographic changes and by the pension system initially adopted in the country. Moreover, the changes in the age structure of the population cause a problem for both the distributive and the cumulative pension system. However, it is important to understand that ageing - that is, increased life expectancy – is not the main problem. Factors influencing the pension policy include the fertility, mortality and migration pattern of the population.

Analysis of demographic changes in Kazakhstan

Thus, during the first period (1991-1999), the population decreased by 1.3 million people, a process exacerbated by the migration process. Thus, at that stage, more than 2.6 million people emigrated from the country (the total migration balance was 1.8 million people) (see table. 1). However, there was also an unfavorable trend in the processes of fertility and mortality. The decline in the birth rate by 38.5%, along with an increase in the death rate by 9.7%, led to a regression of the natural population growth by three times – from 218.8 thousand in 1991 to 72 thousand in 1999. Life expectancy declined by 3 years (in 1990 – 68.7; in 1999 – 65.7), in men by 3.3 years and by women 2.2 years. The gap in life expectancy between women and men increased from 9.2 to 10.3 years. This situation was compounded by the high number of divorces, the number of which for the period amounted to more than 360 thousand, while the number of marriages fell by 48% over the same period.

In the second period (2000-2013), there was a gradual change in the negative trend of population decline. Population growth was 13.5% (or more than two million people); and the population approached the 16.9 million mark.

There have also been major changes in the migration situation – the first recorded positive balance of migration in 2004. The trend was observed in the period from 2004-2011 with the 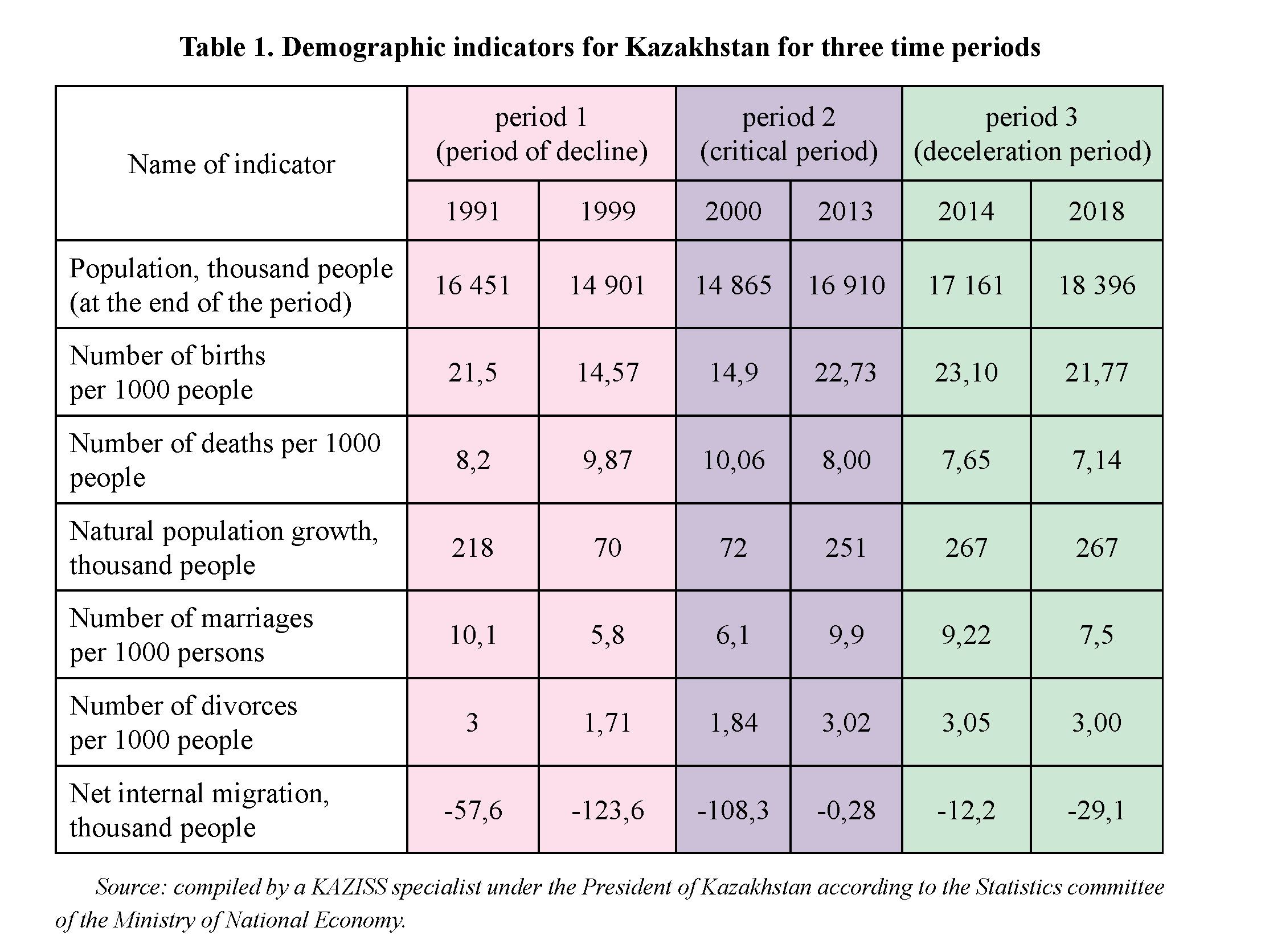 maximum value of the migration balance sitting at 33.1 thousand people in 2006.

The above-mentioned positive factors influenced an increase in natural population growth by 3.5 times to 251 thousand people.

During the third period (2014 – present) the population growth begins to slow down. The average population growth rate of 1.8% thus provides an increase in the country's population of 1.2 million people. This trend is based on weak values for natural population growth (the figure fluctuated between 261,000 and 269,000 people per year). Moreover, negative net internal migration for the period under study increased by a factor of 2.4. The number of births in 2018 amounted to 397.9 people per year, while the mortality rate was lower than in 1991.

Life expectancy at birth has increased by 1.5 years since 2014, from 71.4 to 72.9 years. The highest life expectancy in the regional context is observed in Almaty and Nur-Sultan cities (76.21 years and 76.01 years, respectively).

Therefore, for a long time, especially in the period from 2000-2013, the demographic situation was very favourable. The number and share of the population of working age has mainly increased. Currently, the population is increasing more due to the inertia accumulated in the age structure.

At the same time, we can emphasize the main demographic challenges faced by Kazakhstan at the present time.

Firstly, the age structure of the population is changing. Thus, since 2009 Kazakhstan has seen a decline in the growth rate of the working-age population, with a parallel process of an increase in the growth rate of those with disabilities (see Fig.1). Thus, the ratio between the three main population groups - below working age; working age; and above working age – changes in the direction of a reduction in the size of the working popula-

However, the working-age population is under severe pressure as a result of the demographic collapse of the 1990s. Under these conditions, ageing of the population will only increase with the small generation of the early and mid-90s entering their reproductive years. According to estimates by the Ministry of Labour and Social Protection of the Republic of Kazakhstan, 496 people per 1,000 will be of working age by 2030. As a result, Kazakhstan will by 2030 be experiencing a real problem of uneven dropout and completion of the economically active population1.

Secondly, the birth rate is slowing down, which is one of the barriers to natural population growth.

born in 2016, then in 2018 the figure was 397.9 thousand. In the various regions of Kazakhstan, the highest birth rate is observed in the Mangystau and Turkestan regions and in the capital. Low birthrate has developed in the North Kazakhstan, Pavlodar and East Kazakhstan regions.

Moreover, the fundamental factor determining the dynamics of fertility rates in Kazakhstan which has been observed in recent years is the restructuring of the age model of fertility, i.e. the shift of fertility to older maternal ages. Thus, since 2014 there has been a shift in the number of births from younger to middle (25-29 and 30-34 years) maternal ages (see Fig. 2).

Thirdly, internal migration contributes to the concentration of the population in a small number of regions, while in others it leads to a reduction in population.

There are not many centers of attraction of the population in the country and migration flows are mainly directed only to three regions: Almaty, Shymkent and the capital. Rural areas and small and medium-sized cities continue to lose their population. Thus, net internal migration from rural areas in 2018 amounted to 58.6 thousand people. Young people are mainly involved in migration. On the one hand, the attraction of migrants to large economic centers to some extent resists ageing; and, on the other, migration increases aging and depopulation in the areas which lose population. Thus, according to the age index, a high proportion of elderly citizens is observed in the North of the Republic: in North Kazakhstan (55.8), Kostanay (53.2) and East Kazakhstan (47.4). At the same time, in the southern and western regions, the number of elderly people is insignificant. Thus, the lowest aging index was recorded in Mangistau (11.9), South Kazakhstan (12.5) and Kyzylorda (15.4).

In this way, demographic changes can have an impact on the size of the labor force against a background of a declining birth rate and a growing number of pensioners.

Analysis of developments in the Kazakhstani pension system

Kazakhstan has a multi-level pension system made up of basic, mandatory (solidary and accumulative) and voluntary levels. Moreover, the targets of the Unified Accumulative Pension Fund (UAPF) are inextricably linked with the demographic situation in the country in the long term.

In general we can distinguish the following trends in the development of the accumulative pension system in Kazakhstan:

The growth of depositors and pension savings

The number of depositors at the beginning of 2019 reached 10 380 thousand people. More than

94% of the total number of individual pension accounts are accounts made up of mandatory pension contributions - 9,853 thousand (see Fig. 3).

According to SAPF, 6.4 million of the total number of open accounts is replenished at least once a year. At the same time, the total amount of pension savings amounted to 9 377.6 billion tenge, which is 21% more than in the previous period (1.6 trillion tenge).

Taking into consideration the increase in pension savings, their role as a source of long-term financing in the country's economy is gradually growing: the amount of pension contributions amounted to 16% of GDP against 11.7% in 2014. The ratio of pension contributions of SAPF to GDP for the period under review increased by 1.6 percentage points and reached 11.1%. The ratio of "net" investment income to GDP increased by 2 times – from 2.6% to 6.2% (see Fig. 4).

However, despite all the positive development trends and the latest innovations in the pension system in Kazakhstan, there are problems that will have long-term consequences for society and the implementation of social-economic reforms.

Despite the involvement of the economically active population in the savings system, the informal sector of the economy still occupies a significant part of the population, which in the future may be in a risky social situation. For example, despite the fact that the share of informally employed youth (15-24 years) in the period from 2015 to 2017 decreased from 25.3% to 19.1% of the total number of employed youth in this age group (see Fig.6), the level of informal youth employment remains above the national average (16.1% in 2017).

In addition, there is a significant differentiation of income of the population. Wages make up 65.7% of the monetary income of the population in Kazakhstan. Within this, however, the low level of wages of certain categories of workers persists. Thus, the highest levels of wages remain in the sectors covering Financial and Insurance Activities and Professional, Scientific and Techni- 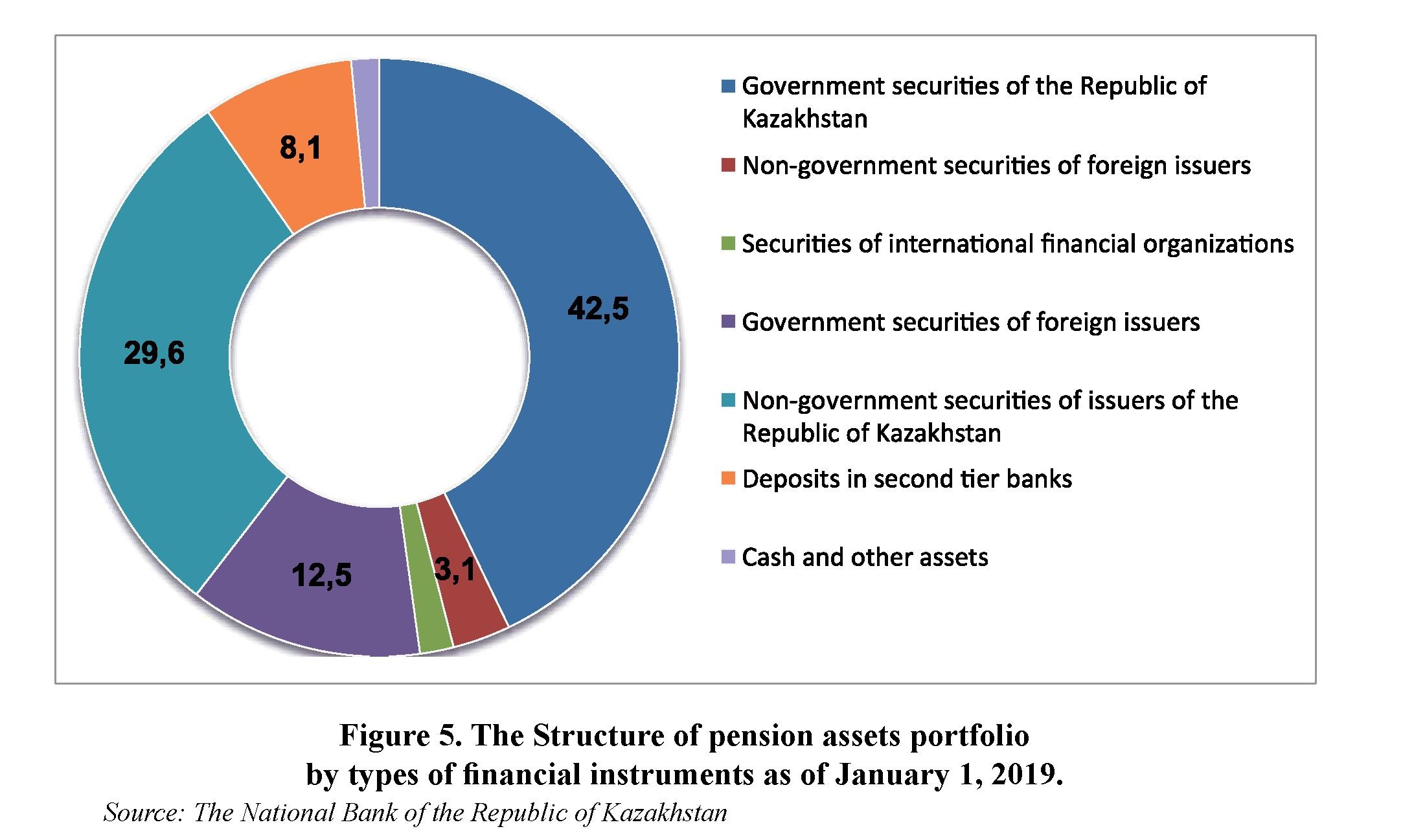 cal Activities, where the indicators are about twice the average level in the economy. The lowest level of wages is observed in agriculture, forestry and fisheries. In addition, the education, health and arts sectors also suffer from low wages. Moreover, the gap between the average salary of an employee engaged in financial and insurance activities and their counterpart in agriculture has increased from a factor of 1.9 to 2.5 over the past five years.

Among the reasons for the weak results of investment is often called the limited financial instruments in which the legislation allows to invest pension savings, as well as the low proportion of liquid instruments in the stock market of Kazakhstan due to insufficient inflow of financial resources.

Thus, the demographic situation has been very favourable for a long time. The number and share of the population in the working age has mainly increased. The demographic situation in Kazakhstan and, accordingly, the challenges posed by it are determined, on the one hand, by the trends in fertility, mortality and migration – and their interaction, on the other hand – by the current sex and age composition of the population. The ratio of the population and thus those who pay pension contributions and the recipients of pension payments, the possibility of reducing labour productivity and the profitability of pension savings, which is changing as a result of demographic structural changes, all create the risk of financial instability in the pension system as a whole. The pension system is, of course, in close relationship with the socio-economic and macroeconomic conditions; and therefore, the implementation of the pension policy should be primarily aimed at protecting the interests of the citizens, that is, the participants, who are within the country’s pension system.