The practice of transforming the economy of Kazakhstan shows that underestimation of microeconomic opportunities for growth in the real sector of the economy can lead to a negative impact on economic development, to significant losses of sources and an increase in the duration of transformations. Domestic furniture enterprises, for the most part, do not orient their performance indicators, the quality of the products to the requirements of customers, which grow as a result of the availability of imported analogues. In the Soviet Union, a planned economy operated based on the production and needs of the country, based on the production doctrine, focusing on maximizing output and reducing the cost of goods and services, applying a centralized design of enterprises for long periods of time (5 years), applying severe administrative methods of management, without a competitive environment. Often, domestic furniture enterprises continue to use the remaining theses management of the Soviet period, guided by production probabilities. Enterprises are trying to produce more to reduce the cost of production and improve the performance of equipment. This causes the gravitation of "pushing" to the market as much as possible of its products, the need for which is often reduced or absent. There is a need to reduce prices, sales, provide discounts when receiving large volumes of products, which worsens financial performance. At the same time, some of the unclaimed products deteriorate and become obsolete.

Many domestic manufacturing enterprises, including furniture industry enterprises, faced constraints on the solvent domestic demand of buyers of products and were not competitive in comparison with manufacturers of similar imported products. In these conditions, the choice of the optimal assortment policy is a main hitch, from the solution of which depends the level of prosperity of both the enterprises themselves and the directions. Consequently, operational management of production affects the state and probability of successful operation of the furniture industry enterprises with ease.

The current potential of the Kazakhstan furniture market is estimated at $ 3,5 billion. In the Soviet era, only its volume was estimated at about $ 1,3 billion a year. Now the annual expenses of Kazakhstan on the purchase of industry products on average are approximately $ 10- 15. In developed countries – $ 260. However, despite the decline in production in the woodworking industry over 10 years, approximately 32 times, this market is now extensive. Moreover, for the outstripping growth of this sector at the present stage, there are all the opportunities, thanks to the formation and development infrastructure of the centers of Kazakhstani oil production – Karachaganak and Aktau port, development of the capital of Kazakhstan – Astana, Expo-17, growth of tourist and roadsideinfrastructure, etc. All these facilities require large volumes of furniture industry products; of course, today the actual volume of the market is smaller than its potential. Growth in consumption of furniture products is constrained by the purchasing power of the population, but it is [1].

As we can see from Table 1, the volume of furniture production from 2011 to 2016 has a growth trend. If we compare 2016 with 2011, the increase was 16,6% or 5122 million tenge, and in comparison with the last 2015 – an increase of 18,8% or KZT 5703 million, this is due to large-scale housing construction, the development of Astana, the implementation of major investment projects in the mining sector, as well as the holding of EXPO-17. However, from 2013 to 2015, the volume of furniture production has decreased; this is because Kazakh producers here, as in other industries, face increasing competition in their own market with imported products. We can note that this is due to the insufficient level of investment in the furniture industry, it depends 100% on imported raw materials and components, a significant part of which is still subject to customs duties.

Let consider the production of furniture in physical terms (Table 2).

The Kazakhstan furniture market is experiencing a large shortage of production materials, which the countries of the Customs Union import. Many firms find a solution in establishing ties with foreign manufacturing companies, buying the necessary building materials from them, which in turn increases the price threshold of the furniture produced by 15-20% [2].

The growth of the furniture market will invariably depend on the level of income of the population and, if it grows, it will be insignificant. Relatively low population, seasonal sales, where the peak sales of furniture falls in December, and in January and May – a decline in sales volumes, as well as weak conditions for the development of medium and large enterprises affect the development of the furniture industry is not for the better. Large and medium-sized producers, as a rule, have their own outlets, small ones are much more difficult to master in the market.

The strengths of domestic manufacturers are directed, as a rule, to the production of office furniture and furniture for sitting (chairs, sofas, chairs, etc.), just as there is a distribution of market demand.

In the general structure of the Kazakhstan furniture market, domestic products have almost the same share with imported products, thus not covering the needs of consumers fully.

This situation is due to several reasons. This is the underdevelopment of the production base, the low quality of products, the lack of sufficient assortment for the satisfaction of demand, and simply the desire of consumers to purchase furniture of foreign production. Due to these factors and for a number of other reasons, furniture imports to Kazakhstan increase annually.

The imports and export volume of furniture products are reflected in Figure 1, according to which it can be noted that imports exceed exports, according to the indicators of 2016 by 97,3%.

Over the past five years, furniture imports to Kazakhstan tend to decline in value terms, so in 2016, compared to 2014, the volume of imports decreased by 52,6% and by 29,7% compared to 2015. In 2013, the greatest value was achieved, that is, the volume of imports amounted to 468.1 million dollars, and subsequent years, and the data show a decline. This is due to the growing share of "cheap suppliers", such as China, Thailand and other countries in the Asian region. In Figure 2, we consider the countries the main importers of furniture in the Republic of Kazakhstan are reflected.

According to Figure 2, we can note that Russia is one of the major importers of furniture products in the RK; it occupies 30% of the total supply structure. Next came Ukraine - 22% and China with 20% in the overall supply structure. In addition, the main furniture suppliers in the republic are Belarus, Italy, Turkey and other countries. The list of furniture importers is listed in the order of 40 countries of different continents.

In these countries, the furniture industry is well developed and there are quite large enterprises- holdings equipped with the latest technology and high labor productivity. Due to the result of the scale, they are able to produce products cheaper than our Kazakhstan furniture makers, which remains the sector of furniture production under the order, which is not produced serially. In Turkey, China, South Korea and some other countries there are special industrial zones in which, with the assistance of the state and industry associations, favorable data have been made for the development of furniture production. Entrepreneurs working in such special areas are provided with state-owned production

11facilities on highly contracted terms. All communications are delivered to the buildings, interest-free long-term loans and tax incentives are provided [4,5].

Thus, the review made it possible to identify the main features of the domestic furniture market: 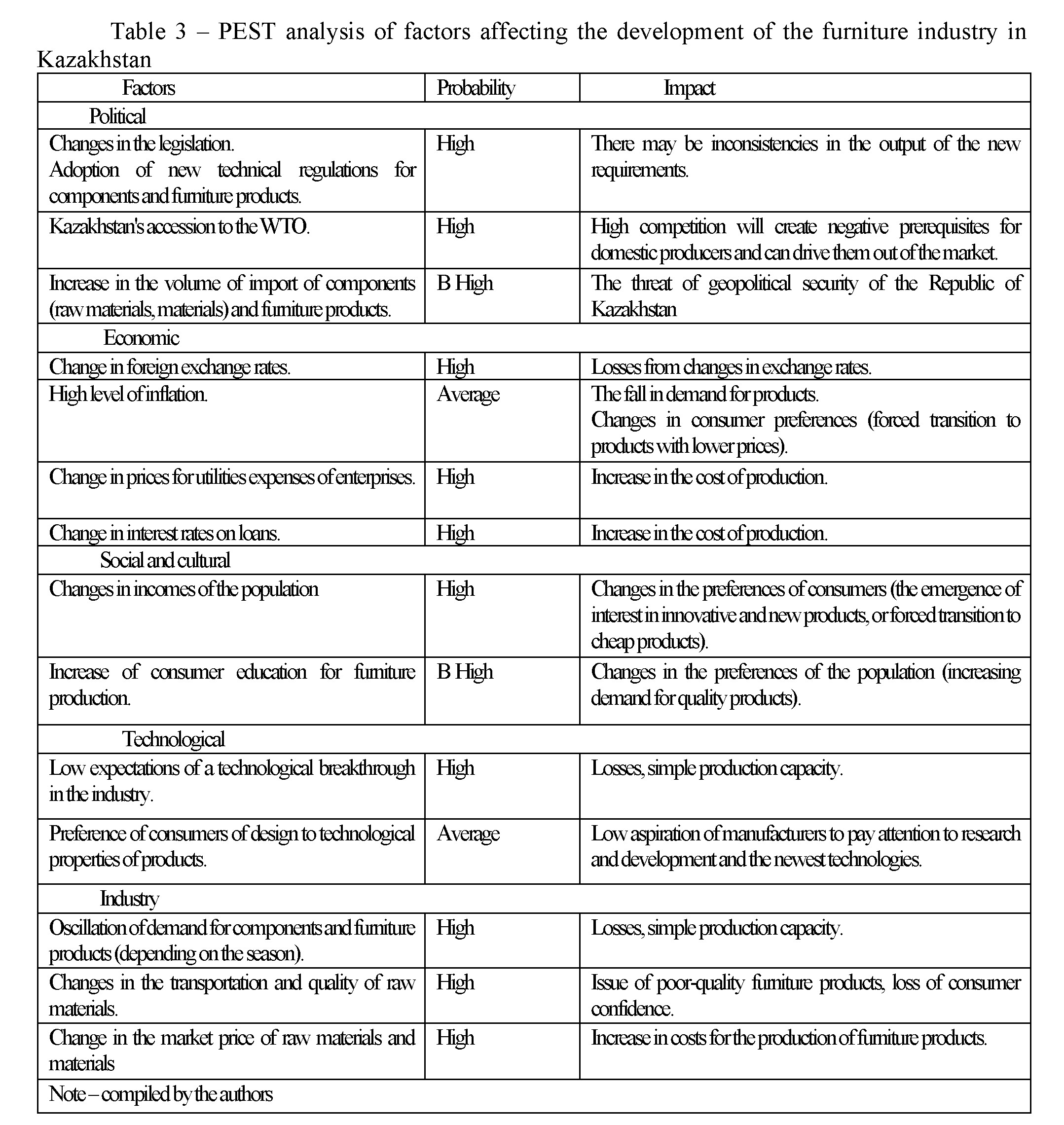 Therefore, in order to compete with products from Russia and China, which account for the bulk of imports, domestic furniture products should have the best performance in the designated parameters.

As noted above, the peak of furniture sales is reported for December, and for January and May – the decline in sales volumes. In such cases, an elastic system of discounts or bonuses is required (for example, discounts on furniture purchased or subsequent purchase, a ticket for free dry cleaning) will allow furniture companies to stimulate sales of products during the recession. The highlighted specificity is also important to consider when creating stocks for holidays, planning payments on loans and borrowings, wages to employees, repayment of accounts payable.

The brand should be understood as "a unique and attractive image of consumption made with the help of communicative influence", under branding – "the process in which a product, becoming a brand, acquires a value exceeding the retail price".

In connection with this reason, one of the factors of furore in the furniture market is the sale of products through branded salons, advertising a trade mark, as well as participation in domestic and international furniture expositions. The lack of branding is manifested in the low culture of post-sales service, and the client is interested in providing related warranty and service services. The above features of the furniture industry need to be taken into account by the external user in evaluating the results of the activities of furniture manufacturing organizations in the medium and long term, because these features form competitive advantages and firm positions in the furniture market. The task of operational management is to ensure the calculation of indicators reflecting the specific features of the furniture market.

As practice shows, despite the fact that all domestic enterprises of the furniture industry are actually in identical external conditions, among them there are those who have adapted to the external environment and work absolutely safely. The key to the furore is the change in the orientation of the production management doctrine: from production capabilities to customer satisfaction, which now is considered one of the most modern and elastic implementations of enterprise management techniques that allows the firm to survive in a competitive environment.

It should be noted that the imperfection of special technologies, low efficiency of labor and other factors do not allow to ensure the intensity of production and to achieve an especially optimal application of all types of sources. These factors reduce the competitiveness of domestic goods, which, under the conditions of the Customs Union and the Global Trade Organization, may lead to the displacement of local manufacturers from the markets and an increase in the share of imports.

Analysis of the peculiarities of the current stage in the development of the furniture industry made it possible to single out its priorities, such as increasing the output of final products with high added value, using options for increasing the export potential, unlocking domestic sources of economic and production development, increasing the investment and innovation potential of economic entities, etc. Realization of these goals , we believe, provides operational management of production, resolving to solve problems Gain a competitive edge on the basis of the current industrial policy branch; orientation to renew the technological structure of the industry, accelerated establishment of enterprises using new innovative special technologies