At present more and more attention is paid to the issues of the influence of physical and psycho-emotional stress on the human organism. A special role is given to the period of study at the university, which is difficult and lengthy, requires emotional stability, increased energy consumption, and usually affects the age period, which coincides with the completion of puberty and the formation of homeostatic constants in the organism [1, 2]. Adaptation to learning conditions is carried out by mobilizing of functional reserves and turning on most of the organism's regulatory systems. Dosed physical training (DPT) is capable of exerting a certain, usually adaptive, effect on the body, causing changes in the activity of a number of functional systems: respiration, blood and blood circulation. The most significant changes are observed in the cardiovascular system (CVS) [3], in particular, in such important component of its function as blood microcirculation in blood vessels [4, 5]. In literature the problem of adaptation of the cardiovascular system, and especially blood microcirculation to DPT in students has not been sufficiently illuminated to date. The age aspect of this process is presented in an extremely fragmentary manner.

The aim of the study was to investigate the adaptive capabilities of the cardiovascular system and blood microcirculation in 18–21-year-old students under the dosed physical training.

The investigations were carried out on 130 students of 18–21 years of natural-geographical faculty of the Bohdan Khmelnitsky Melitopol State Pedagogical University at rest and after DPT. Students were divided into 4 age groups: 18 years old — 35 students, 19 years old — 30 students, 20 years old — 30 students, 21 years old — 35 students. Investigations with student’s participation were carried out in accordance with the Council of Europe Convention “On protection of human rights and human dignity”, considering the use in biology and medicine the Convention “On human rights and biomedicine” (№ 164 of 04.04.1997) and the Helsinki Declaration of the World Medical Association (2008).

(MBV) were calculated. Also, the Kerdo index (KI) and adaptive potential (AP) were determined. The last was calculated by the formula:

DPT was modeled using a Biorhythm-4 bicycle ergometer and was selected in such a way that the work power provided the rate of O2 consumption at the level of 70–75 % of VOmax. For this the cadence for 2 minutes was 50–80 revs/min [5].

The study of blood microcirculation (MCC) was carried out by the method of laser Doppler flowmetry (LDF) using the LAKK-01 apparatus (Russia) [6, 7]. The principle of the method is based on the reflection of a laser beam from moving blood particles (erythrocytes). The displayed signal encodes information about fluctuations in the flow of erythrocytes, both in terms of volumetric content and their speed [8].

The microcirculation parameter (PM), standard deviation (SD), coefficient of variation (Kv) were recorded, and the active and passive mechanisms of blood flow modulation were assessed. The LDF signal was measured on the ventral surface of the 4th finger of the left hand. The duration of the LDF-gram recording was 2 minutes [7].

The results were statistically processed with help of the STATISTICA 6 software using the Student's t-test. The results are presented as the mean value ± error of the mean (M ± m), since, due to a significant array of digital material, as well as in accordance with the Shapiro–Wilk criterion, the obtained data fit into the normal distribution law [9]. Differences between the mean values were considered statistically significant at P < 0.05.

The conducted research showed that HR among students of different ages at rest was significantly different; the highest value was observed in 18-year-old subjects. After performing DPT, this parameter increased in all age groups, most significantly in 19-year-olds — its value increased 1.8 times, which characterizes an adequate, but ineffective CVS response to DPT of a given intensity (Table 1).

In students the adaptation of HR to DPT depended on age and manifested itself as a stress reaction. As a rule, the release of stress hormones and the activation of the autonomic nervous system, aimed at the stabilizing of internal environment in the absence of adaptation of the organism to the physical activity were observed [1].

Indicators of systolic pressure (SP) underwent age-related fluctuations at rest: they decreased with age and, apparently, stabilized by the age of 21 at the level typical for healthy young men. Similar changes were observed in relation to diastolic pressure (DP) (Table 1).

After performing DPT an increase in SP was noted in all age groups. The greatest increase of this indicator was observed in 19-year-old students (1.4 times) and its value reached 166.7±1.24 mm Hg.

The response of DP to DPT was manifested by a significant (by 11.1 %; P <0.05) decrease in 21-year- old students with unchanged indicators in other age groups. It is precisely this reaction from the side of blood pressure observed in older students that at present is considered adequate during physical activity [11]. In all age groups the increase in PP and MDP were noted, and significantly more pronounced relative to PP in persons aged 21 (Table 1).

An informative indicator of the hemodynamic function is the value of the systolic volume. Among the examined students its value differed depending on age, the highest value of SV was observed in 21-year-olds (95.2±1.12 ml). After DPT the SV characteristics increased, but the rate of growth was different. The smallest shift was observed in 19–20-year-olds (by 36.9 and 34.9 %, respectively), the largest in 21-year-old students by 57.6 % (Table 1). Hemodynamic changes of those in older age group followed a more effective path, mainly due to the volumetric rather than frequency component.

The value of the minute blood volume is determined by the need of organs and systems for oxygen. Comparing the values of MBV in the age aspect, it should be noted that at rest the differences had spasmodic character, however, only in 19-year-old students the value of MBV was significantly reduced, in the other groups the differences were in the form of a tendency (Fig. 1).

The MBV value after DPT increased in all age groups approximately equally from 2.3 to 2.5 times, depending on the age of the examined. It should be noted that the increase in this parameter after DPT, as indicated, was mainly due to the increase in HR, which points to a low efficiency of the heart, with its increase by the age of 21, i.e., towards the end of puberty. 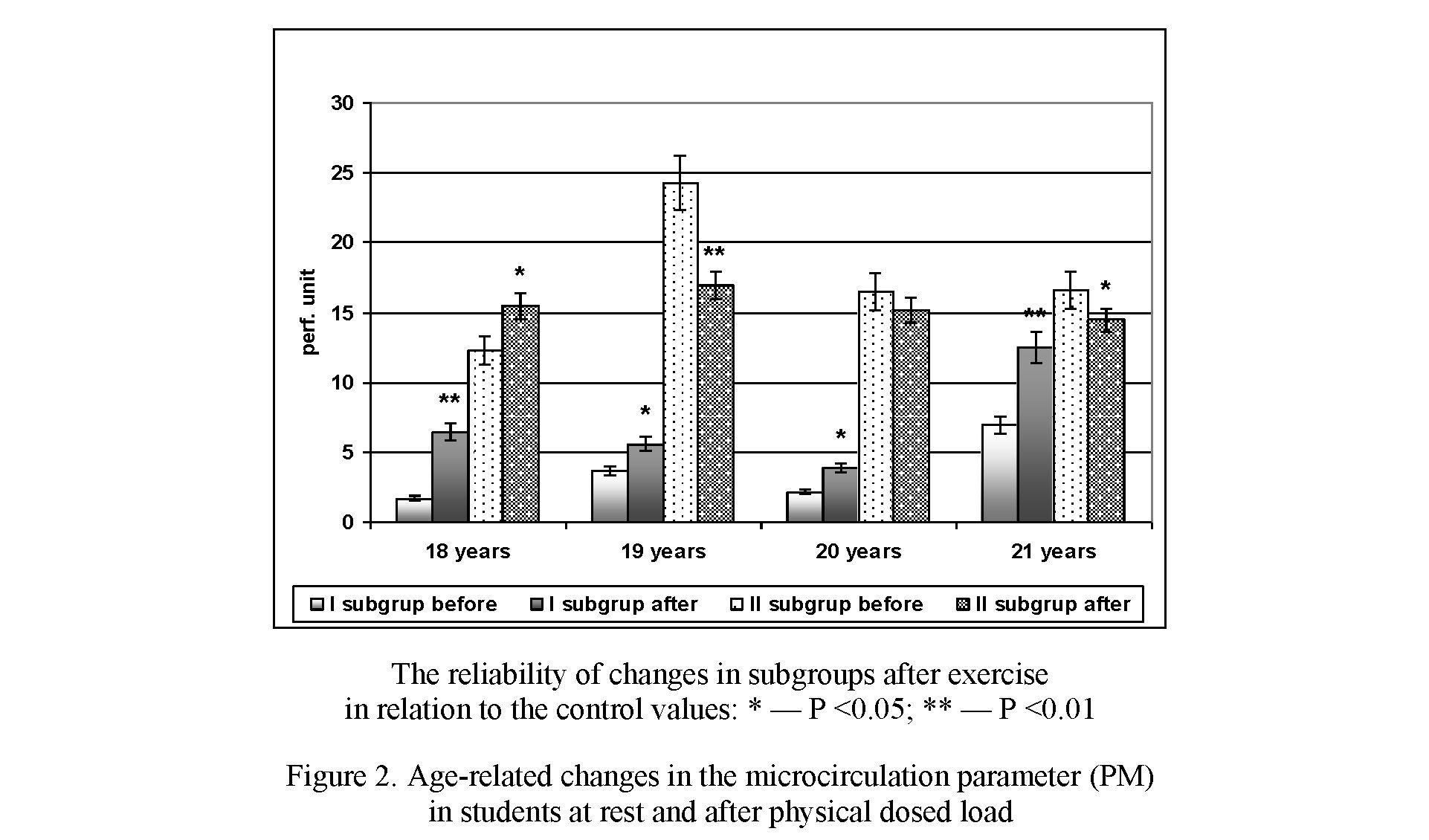 Analyzing the changes in KI, we can judge the mechanisms of cardiac activity regulation. Thus, all students after performing DPT had sympathicotonia. The sympathetic nervous system plays a central role in the regulation of the CVS, therefore the predominance of the processes of activation and stimulation of physiological functions in the examined subjects can be stated, which is especially important under DPT [12]. The most pronounced sympathicotonia was observed in 18-year-old students.

The analysis of the adaptive potential (AP) among students showed that in the overwhelming majority of cases the AP level testified the unsatisfactory adaptation of the organism, which characterizes insufficient adaptability to physical activity. This is especially true for 18-year-old students, whose adaptive potential was 3.65. In older subjects (for example, a group of 20-year-olds) AP decreased to 3.15, which indicates the transition of the organism from the level of unsatisfactory adaptation to the level of functional tension of its mechanisms [13].

When analyzing the MCC in students on the basis of the conducted research, it was shown that, depending on the value of the main parameter of microcirculation (PM), it is necessary to divide each age group of the examined into 2 subgroups. Subgroup I consisted of students whose PM values ranged from 0.5 to 10 pf. units, in the subgroup II the PM ranged from 12 to 25 pf. units.

There were also marked age-dependent changes in Kv among students of the subgroup I; the highest value was found in 18-year-olds (Fig. 4). In the second subgroup of students the differences in this indicator at rest were insignificant. After DPT the most pronounced deviations were observed in 18-year-olds of subgroup I — this indicator decreased. Since Kv characterizes the relationship between the variability of perfusion and the mean perfusion in the probed tissue site, thereby indicating the percentage contribution of active components to the total modulation of tissue blood flow, we can speak of an increase in the load on the vasomotor component of tissue blood flow modulation at a young age to ensure stable perfusion of the microvasculature.

When analyzing this parameter among students in the age aspect, both in subgroup I and in subgroup II, IEM increases with age (with a maximum in 19-year-olds from subgroup I). Influence of DPT has a lowering 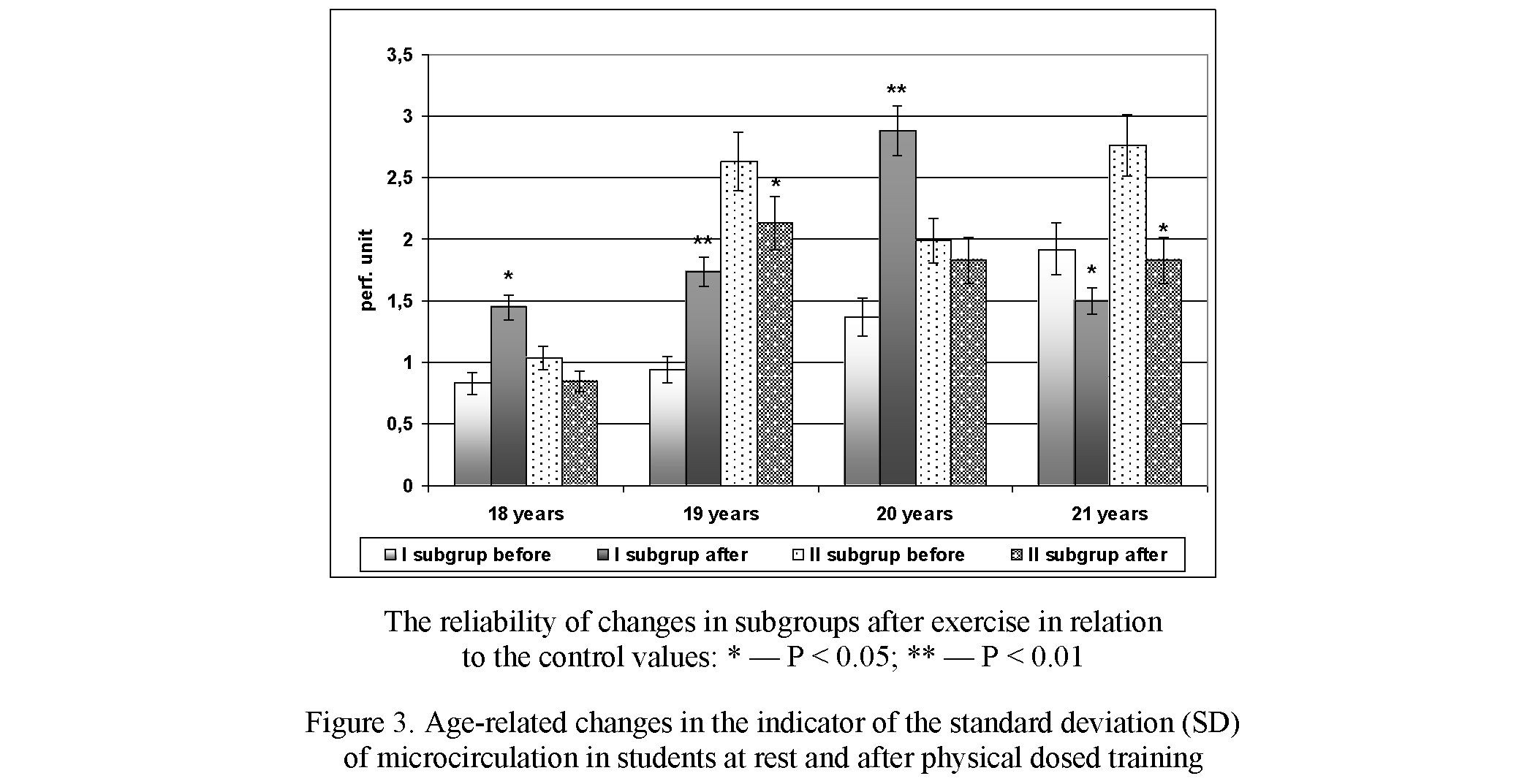 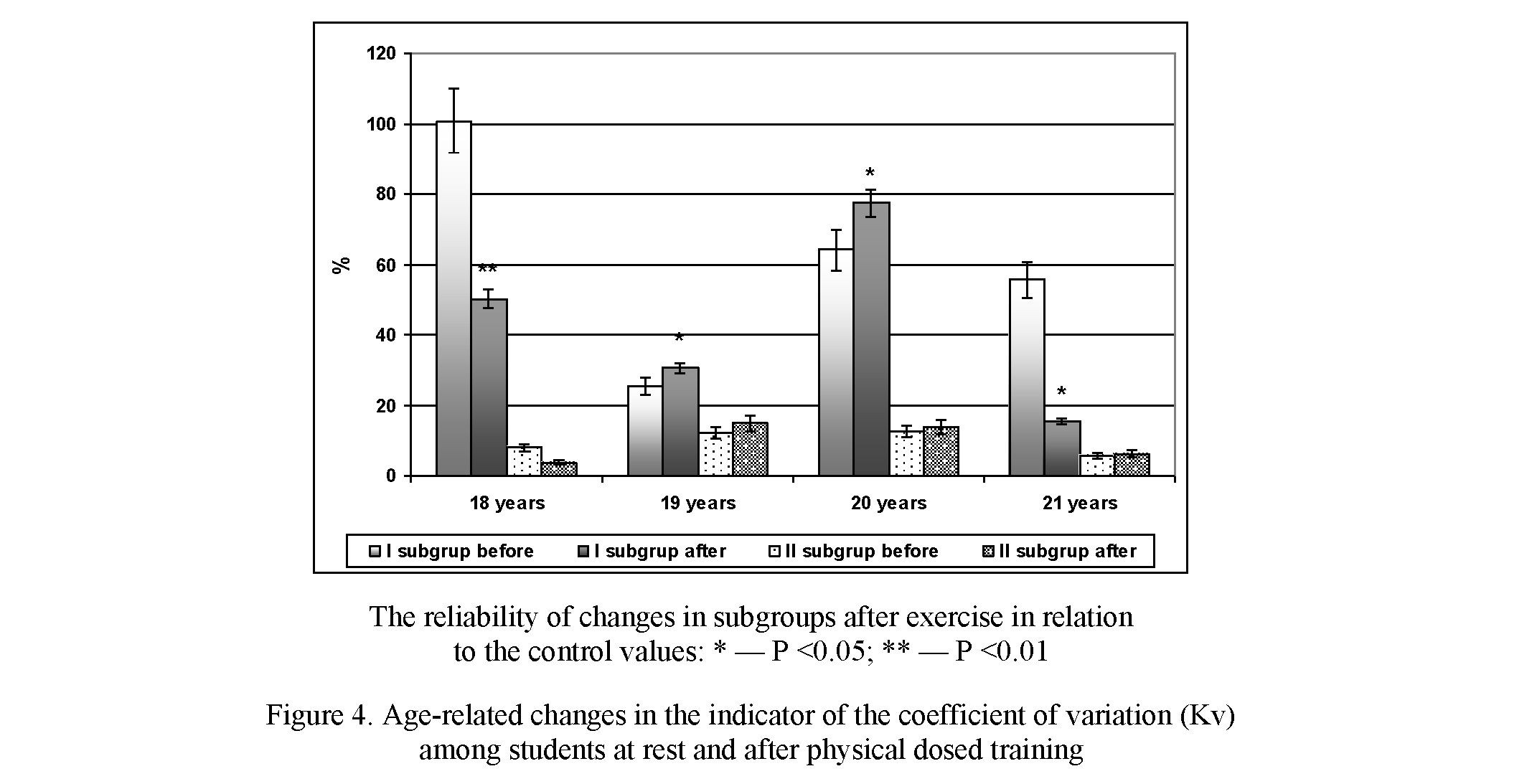 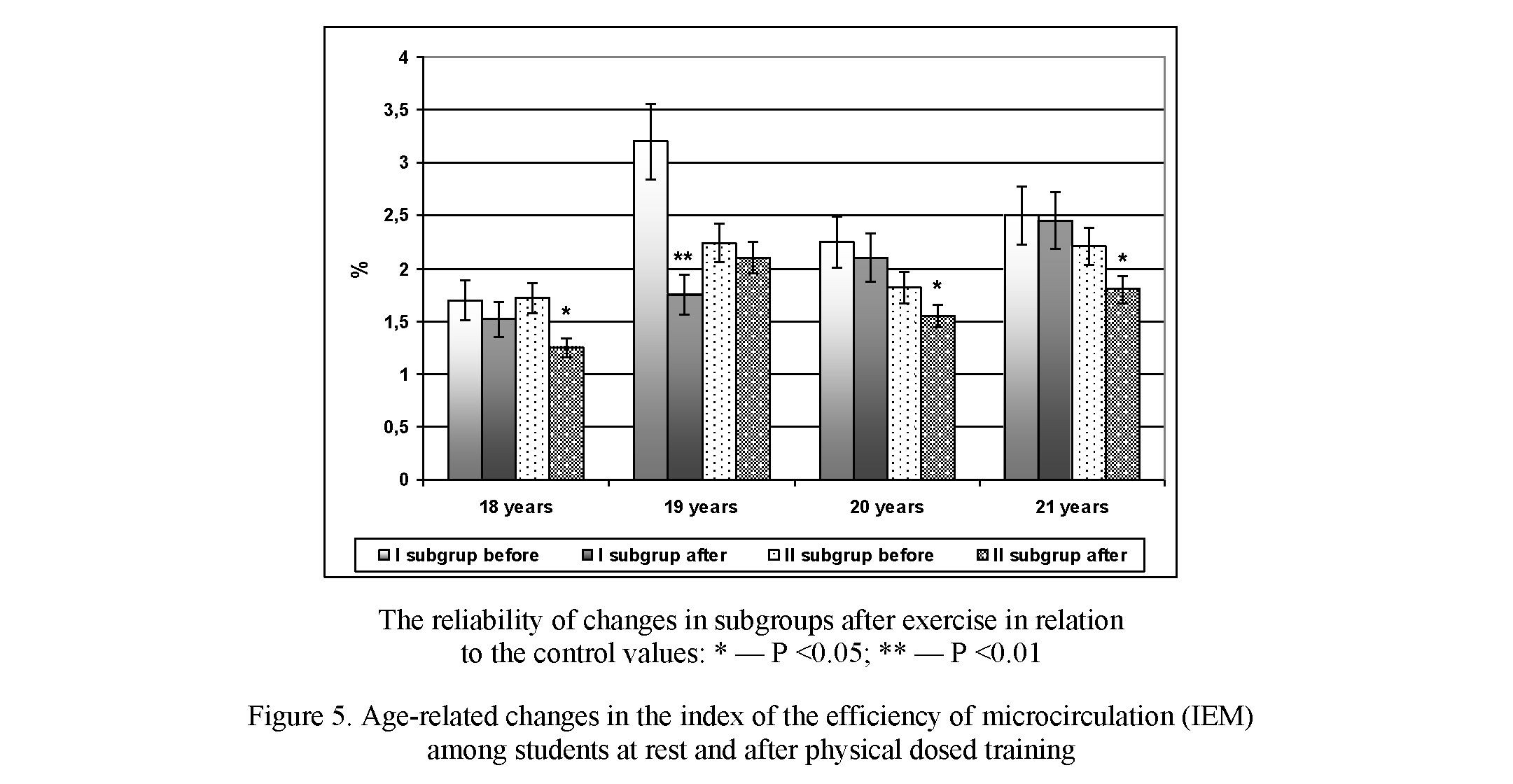 effect on this index in all age groups of both subgroups. The greatest decrease in IEM was observed in 19-year- old students of the subgroup I (Fig. 5).

The decrease of IEM in students of both subgroups in response to physical activity can be explained by the lack of compensatory mechanisms development, especially in younger age groups.

Despite the insignificant age differences between the groups of students, the indices of the cardiovascular system function (HR, SP, DP, SV, MBV) at rest significantly differed depending on age. By the age of 21 most of the studied parameters (either decreasing or increasing in waves) reached the level typical for young adult men.

After physical training these indicators increased to a greater or lesser extent, and the most pronounced increase was observed in 21-year-old students. In younger age groups the changes were less effective, which additionally indicates an insufficient level of the adaptive potential of their organism.

Such features must be taken into account when planning the training process of students in physical training classes. Moreover, in parallel, a decrease in the index of microcirculation efficiency under the influence of physical training (also the most significant in younger students) was shown. The degree of this decrease depended on the initial level of the microcirculation parameter, i.e., on the intensity of tissue blood supply. Such features can be explained by the lack of development of compensatory mechanisms in the blood microcirculation system.