The effectiveness of the recognition of laparoscopic video-images of the surface of the surface of the appendix is described. The automatic diagnostic technology was developed on the basis of Haar‘s features usage. The classification of images was performed using cascade classificator exploration, and 1000 positive images along with 500 negative ones have been used for the learning . It was established that the sensitivity of appendicitis diagnostics was 73,2% and exceeded that one which was determined after expert analysis (45,0%) (P<0,01). Besides, the specificity was also elevated - from 55,9% after expert diagnostics up to 83,2% (P<0,01) after developed method. Evaluation of ROC index - area under curve (AUC) revealed it‘s value 0.891 for developed technology and 0,723 for expert value.

Computer automatic diagnostic (CAD) systems, which are able to recognize suspected zone of image are based on algorithms of color, contour / shape and texture analysis [4]. Some peculiarities were stressed for video-laparoscopic images automatic classification [1, 8]. Thus, authors pointed on the absence of tangible differences in elements of images as a result of rather high level of noise and lack of lightness. Besides, another obstacle, which complicates the CAD is confined to high variability of the shape of objects, which are searching for. Also the majority of pixels contain prevalently red color hues, which reduced their informative significance.

The quick change of the angle of object along with changes of their illumination and specular reflections significantly impact on the result of automatic recognition [5,6]. The net differences between human eye perception of eye and digital camera coding, which ignores Weber-Fechner law also contributes to final results of investigations Such differences justify the usage of gamma-correction of primarily gathering information, which permits to identify relations between quantitative pixel characteristics and their actual brightness [1,5]. After such a procedure the logarithmic scale exploration does not worsen the subjective color scale of human eye.

Taking into consideration the complex and complicate way of color characteristics estimation, the conversion to grey scale is known as a universal approach for reliable comparison with the control [2, 3, 4, 7]. Thus, for the hysteroscopic images the heightened mediana of grey scale is clearly identified and along with more homogenous and less contrast might be treated as informative differential index for normal state identification [4, 8]. Such data points on the effectiveness of the image texture characteristics for the diagnostic malignancies of endometrium [4].

Hence, altogether mentioned data are in favor for principal possibility of effective exploration of Haar features - based CAD for recognition and classification of video- images.

Today we have no strict recommendations on the protocol of automatic classification of laparoscopic video- images. Meanwhile, being based upon mentioned peculiarities of laparoscopic video images it was reasonable to use Haar wavelets for the quick and reliable recognition of pathological changes.

The main aim of this work was to work out CAD which was able to distinguish between normal and pathological appendix state being based on laparoscopic video-data registered in the course of laparoscopic diagnostic procedure.

Hence, it was reasonable to include methods of recognition of images which is based on the usage of Haar features 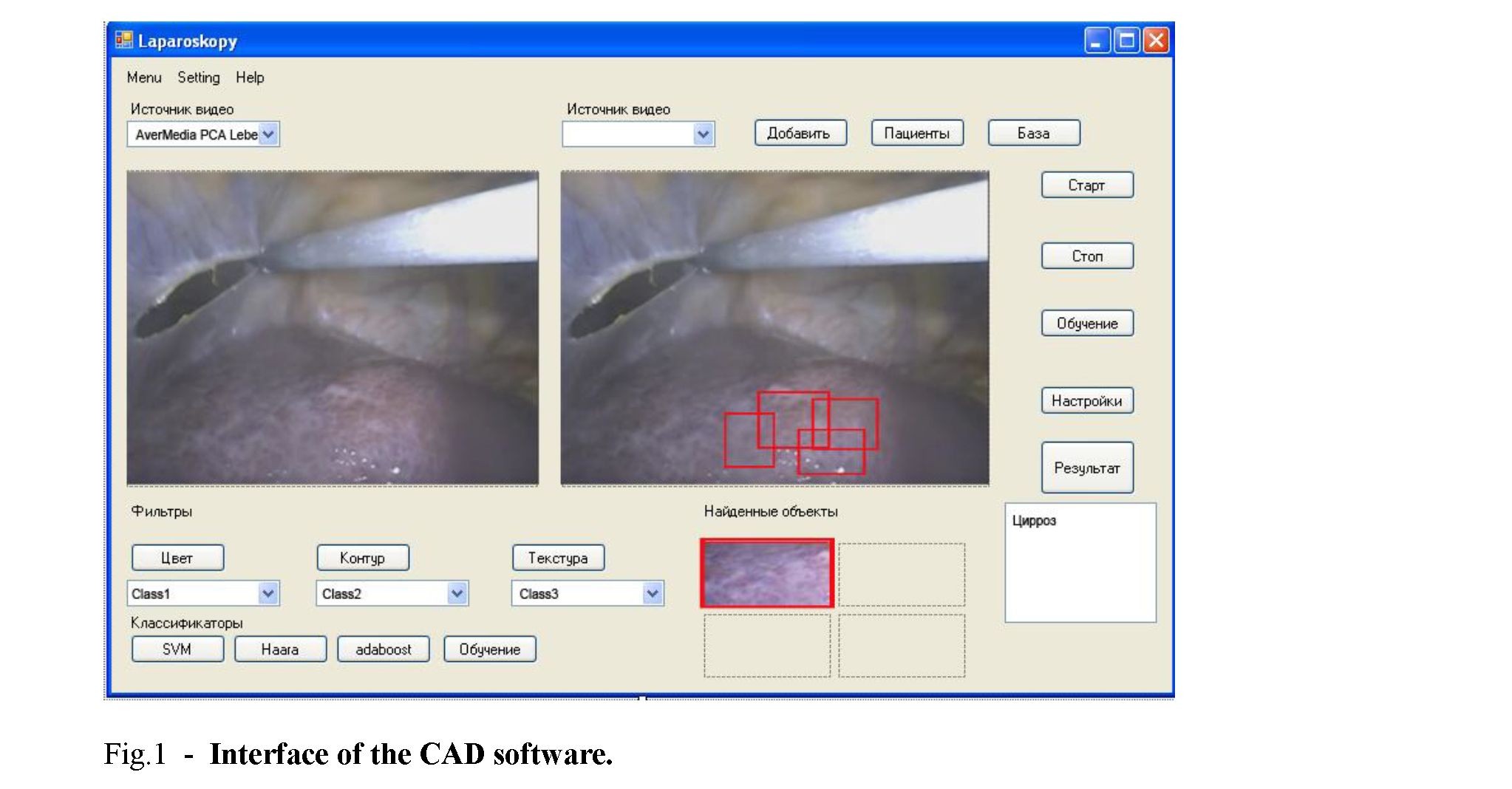 The CAD system, which was worked out assumed the capture of video frame with the next gamma-correction, multiscale texture analysis, extraction of the characteristics of image with VSM [4, 6,]. Taking into consideration that Haar features are effective in case of recognition of image presented at different recourses.

The next steps were performed in the course of collecting data and their analysis:

features on the estimation of the intensity of pixels; Also the principal possibility of heightening of the

Haar features based images recognition, which was delivered by [ ], was in favor for the exploration

Haar features for video- laparoscopic images classification in our investigation;

All laparoscopic videos were got laparoscopic camera with 5 mm aperture diameter —Carl Storz Tricam Camera (Carl Storz, Germany) during 2011-2016 years. That camera had the analogous input (PAL 475 horizontal lines) and incoming signal was digitalized with the pixel density of 720 х 576 and capture was made with video capture card “averMedia HD capture Studio 203” (Avermedia, France). Criteria (both technical and medical), which have been used for the inclusion were the next: documented digital camera calibration made in accordance to the manufacturer instruction; the average severity of patient’s state and approving of diagnoses by results of clinician and laboratory and instrumental investigations.

For the Haar features learning 32 laparoscopic video images patients with acute not complicated appendicites was used as —positive” images. Also for the learning 40 videos gained from normal appendicitis surface were used as a control - —negative” images.

For the classificatory learning the next parameters were explored:

With the aim of classification of video-images the vector support machine and cascade classificatory were used which were based on Haar features.

The effectiveness of the worked technology of CAD of appendicitis was estimated in the course of diagnostic laparoscopy performed in 179 patients who were suffered from —acute abdomen” symptoms. All cases were also proposed for experts - surgeons who have been experienced with laparoscopic diagnostics not less than during 5 years. In both cases sensitivity and specificity of diagnostics have been calculated. The sensitivity was got in accordance to TP (true positive)/ (TP+ FN (false negative diagnoses) x 100%. Specificity was recalculated as TN (true negative) / TN+ FP (false positive) x 100%. On the basis of gained data the ROC curves have been plotted and AUC data were used as an final indicator of the effectiveness of diagnostics.

Results of investigations. In accordance to gained data the sensitivity of the developed technology was 73,2% and is exceeded significantly the correspondent data in group with expert diagnostics (45,0%) (P<0,01). The specificity of diagnostics was also raised - starting from 55,9% in expert group up to 83,2% after CAD (P<0,01). The estimation of ROC revealed that total square under ROC (AUC) in the group with developed technology exceeded such one which was estimated in the group with expert diagnostics - 0,891 and 0,723 correspondently (Fig.3).

Hence, the gained data are in favor for the high effectiveness of appendicitis automatic diagnostics with the worked out CAD. Taking into consideration of the high significance of the color of the surface of appendix as a marker for inflammation diagnostics, gained data support the data on high informative value of the grey scale for surface characteristics presentation [ 2 - 4, 7, 8]. It might be assumed that there is a net room for further comprehension of developed system, which might be enriched with the simultaneous usage of texture and contour algorithms. 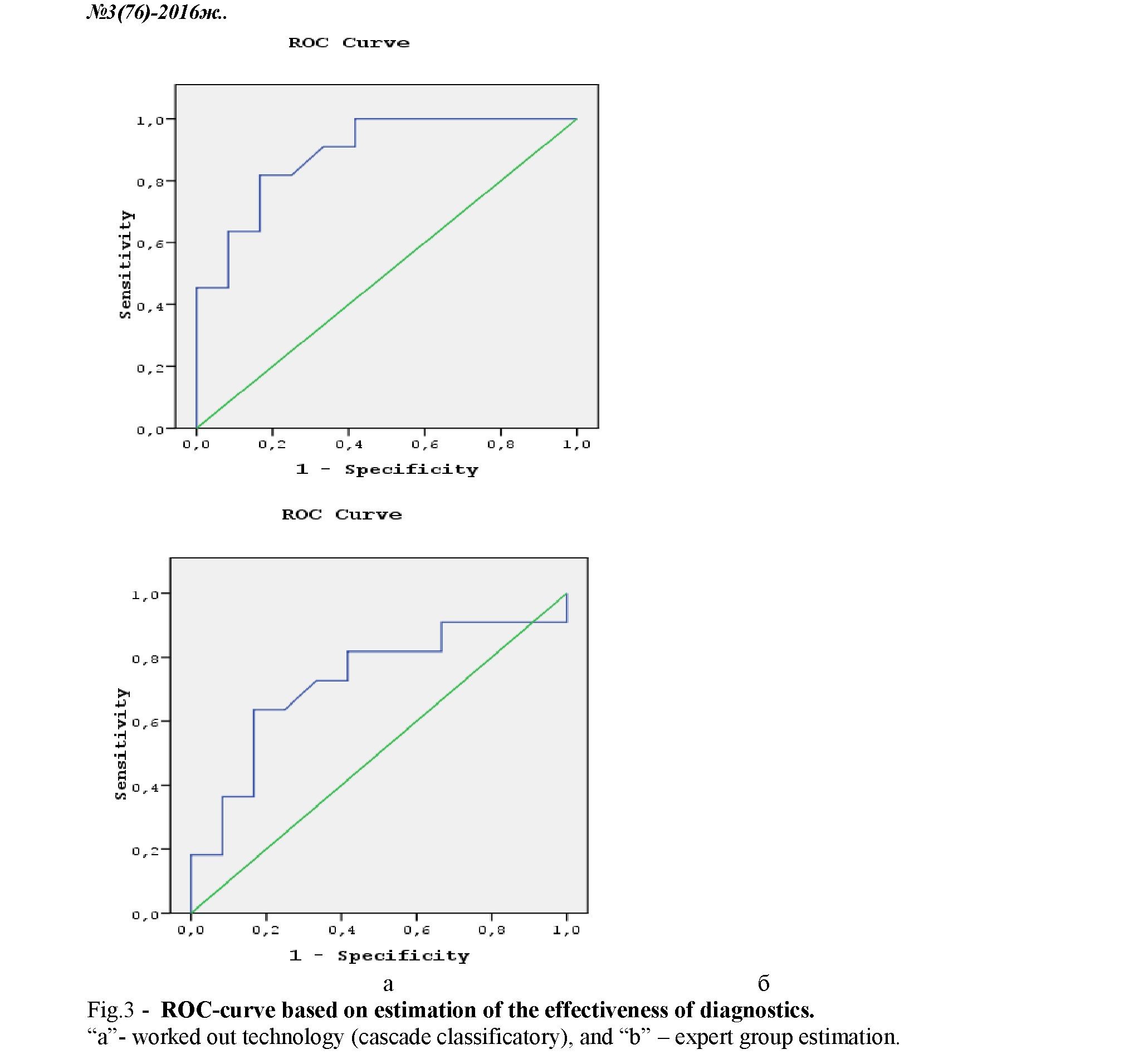 Conclusions: 1. The analysis of laparoscopic images based on the Haar‘s features exploration permitted effectively classify early forms of appendicitis.

2. The worked out computer automatic diagnostics (CAD) of acute not complicated appendicitis, which was based on the analysis of laparoscopic images is more effective than expert diagnostics.