Mapping air pollution by means of the program ArcGIS 10

This article is devoted to modelling of contamination of air medium of industrial center evolve three phylum of sources of influence: the industrial enterprises, motor transport and private sector. In this article process of mapping of contamination of air basin by the industrial exhausts, leading the greatest contribution to contamination of city air is described on the example Karaganda. Exhausts from the industrial enterprises are considered as set of point sources, each of which has the characteristics on frame and volumes of exhausts. The chosen mathematical model calculating diffusion of pollutants in atmosphere is based on use of the equation of conduction. Prevalence of pollution for enterprise limits is predicted. The Gauss model is used at calculation of dispersion of admixtures in the conditions of local weather conditions. The forecast of volume of concentration of contaminants in a ground layer of a free air is carried out.
S.A.T alzhanov, I.O.Seitkaliyev 2016 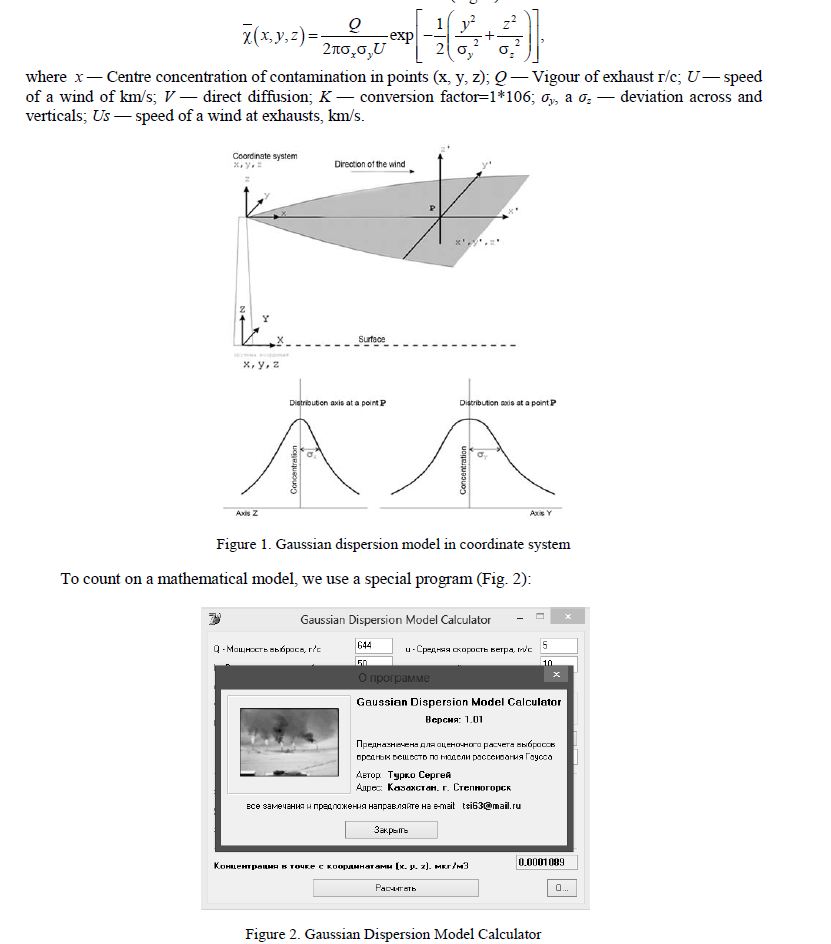 Modern Kazakhstan deserts for many geological epochs were areas of the Earth's crust immersion. As a result, there marine and continental powerful unconsolidated sediments have accumulated. The alternation of the sediments indicates a change in repeated transgressions and regressions of the sea caused by centuries of slow vertical oscillation of the land. The complexity of the geological structure of Kazakhstan conditioned by participation of the different rock complexes. The age of rocks varies widely. Paleogeographic history of the arid zone shows the relation of the present topography of the arid zone with ancient geological structures
K.M.Akpambetova, Z.Bujdoso, A.A.Rahmetova 2016

This paper describes the results of the research morphological and physiological parameters in the sperm of the male population aged 18 to 49 years, conducted by the research team of Karaganda State Medical University under the STP «Integrated approach to managing the health of the population of the Aral Sea region» on the territory of the environmentally disadvantaged regions of the Republic of Kazakhstan — s. Shalkar and v. Yrgyz of Aktobe region. Clinical examination was carried out of 225 men from s. Shalkar and 150 men from v.Yrgyz and have taken the test ejaculate for macroscopic and microscopic examination. The test was divided into three age groups: 18–29 years, 30–39 years, 40–49 years. As a result, it was revealed worsening morphological and physiological parameters in men of all age groups and living areas of Aktobe region.
B.Zh.Kultanov, G.V.Bublik, G.K.Turlybekova, K.A.Yestemessova, R.S.Dosmagambetova 2016