The suitability of the CISG for adoption into English Law

This article examines the situation when the government of the UK de­ lays the adoption of the CISG. Furthermore, some economically strong or­ ganizations are against implementation of the CISG. Moreover, businesses do not support ratification. However, English law could not ignore the CISG, as it was ratified by a large number of states. Non­ratification of the Convention might be un­ fortunate to English law, asforeign traders would practice solving problems under the CISG. It was justified that the CISG could not regulate some areas and, there­ fore it might be pointless to implement such Convention. Furthermore, the current legal system was developing for decades and regulates most of the issues of the English trade and any changes to the system might bring unpredictable consequences. Moreover, ratification of the CISG could not support uniformity. Finally, the CISG has regulations, which are foreign to common law.
Kuderin I.K. 2015

The significance of delocalisation theory in international commercial arbitration is of paramount and copious importance. ‘Delocalisation’ refers to the possibility that an award may be accepted by the legal order of an enforcement jurisdiction whether or not the legal order of its country of origin has also embraced it. The parties are not only free to choose the applicable procedural and substantive law in international arbitration, but also they can detach the arbitration from the national law, and lodge it to international  law  so  as  to  be  «a­national»,  «supra­national», «detached», «stateless», «transnational», or «floating» arbitration.
Otynshiyeva A.A. 2015

According to the study of scientific work in the article examines the legal basis of regulation of a bank secrecy. Based on the opinion of the Kazakh and Russian scientists have made findings and made suggestions. Focuses on the shortcomings of disclosure of this concept in the legislation of the Republic of Kazakhstan.
Tuyakbayeva N.S., Biskultanova A. 2015

The Treaty of the complex enterprise license (franchise) as a civil law contract for services has its place and role in the system of civil legal agree­ ments of the Republic of Kazakhstan.This paper reviewed the order and conditions of implementation, the place and importance in State regu­ lation, the legal function and improving the functions of the integrated business­entrepreneurial license (franchise) since its inception, provides recommendations to improve the Act of governing laws regulating the re­ lations of the complex enterprise license (franchise).
Assil’bekova G.A. 2015

On the problem of protection  of personal information

Directions of customs logistics  in the global aspect

This article discusses one of the most pressing issues of customs law. The issue of logistics is of particular importance in terms of economic inte­ gration, taking into account the interaction of a number of actors (states) in the Common Customs (economic) territory. Directions of customs logistics in the global aspect yavlyaetsya a very important part of the topic. Legally customs logistics is governed by national and international regulations of the Customs Regulation. In order to provide quality professional services in the field of customs logistics specialist should perfectly understand the legal basis to be able to correctly classify the goods for customs purposes, know all the details of declaration.
Kabanbaeva G.B. 2015

Integrated associations in Europe and Asia: National and International Perspectives

The article deals with the issues of integration on the example of Eu­ rope and Asia (for example, the European Union and the EAEC). The need for regional economic integration is now becoming more apparent than in the XX century. Economic integration – the process of economic coopera­ tion between the countries, taking the form of intergovernmental agree­ ments and coordinated by  national  or  intergovernmental  bodies,  leading to a convergence of economic mechanisms. Cooperation in the form of integration of groups determined by the same level of economic develop­ ment and the degree of market maturity integrating countries. With rare exceptions, interstate integration of developing or between developed countries or developing countries, in most cases, having common borders and historical economic relations, the presence of general economic and other problems faced by countries in the development, financing, regula­ tion,  economy,  political  cooperation,  and  so on.d.
Alibekov S.Т. 2015 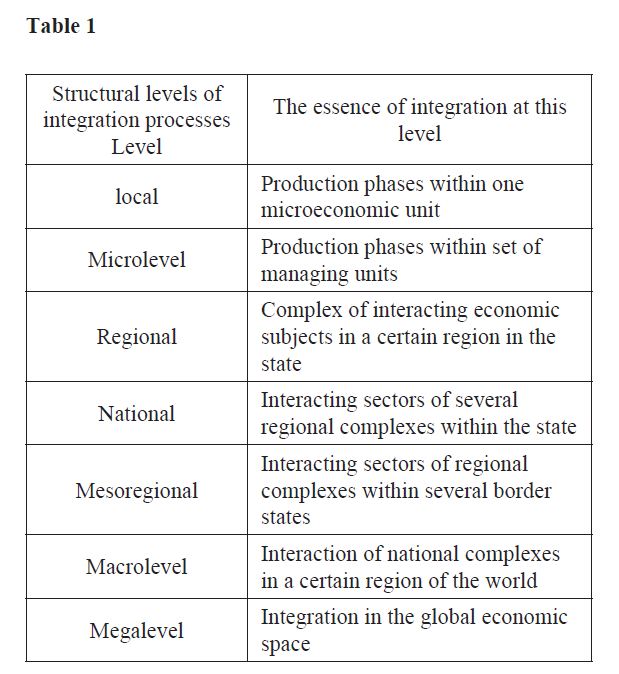 The success of carrying out reforms in Kazakhstan in many respects depends on integration of Kazakhstan into world economic system. At the same time, with liberalization of economic activity the need of providing economic, food security of the republic arises and amplifies. If in modern conditions not to provide elaboration of strategic approaches in issues of economic including food security, prospects of a sustainable development of Kazakhstan at best will be removed on the far future. Tendencies of transnationalization of production of a number of sectors amplify. Infor­ mation space of Kazakhstan is more and more integrated into a common information space.
Kalymbek B., Ozenbayeva A.T. 2015