The structure of refractive errors in school-age children of Almaty

Purpose: To study the frequency and structure of refraction abnormalities among students with different levels of learning.

Methods. The study was conducted on the basis of a comprehensive school, a school-gymnasium and a specialized boarding school for gifted children in sports located in Almaty. A total of 1,175 students from the 1st, 5th and 9th grades were examined. Ophthalmic examination included visometry, skiascopy, the determination of relative accommodation stock, slit lamp examination, ophthalmoscopy.

Results. Among the causes of reduced vision in the first place was myopia in 195 children (51.3%). In second place is accommodation disturbances, which occurred in 139 students (36.6%). In third place is hypermetropia in 24 (6.3%) and in 22 schoolchildren mixed astigmatism (5.8%) was detected.

Introduction: An WHO estimated 19 million of the world's children are visually impaired. [1] Refractive errors (RE) such as myopia, hypermetropia, and astigmatism are the most common eye disorders. [2]

The first serious studies on the frequency and structure of refraction anomalies in schoolchildren were conducted in the second half of the 19th century. These studies first established the following facts: 1) Myopia is in the first place among schoolchildren's refractive errors; 2) the number of children with myopia increases from primary to higher grades; 3) as the school level increases, the number of students with a high degree of myopia increases. [3; 4]

In the future, these findings were confirmed and supplemented by the works of many authors at the end of the past and the beginning of this century. [5-7] Over the past decades, there has been a tendency towards an increase in the incidence of the child population, especially among school-age children.[8-10]

Recent studies have revealed a significant increase in the prevalence of myopia among schoolchildren, due to increased information support for the educational process that accompanies the available additional visual loads.[11-13]

Visual problems due to uncorrected refractive errors (URE) in school-aged children have a profound impact on their educational, social, and general quality of life. [14]

At the present stage, changes are taking place in the Kazakhstan education system: new systems and training technologies are being introduced. According to the Ministry of Health of the Republic of Kazakhstan, 53.8% of Kazakhstani schoolchildren have various health pathologies. [15,16].

Often, in new-type schools (lyceums, gymnasiums), learning activities do not adapt to the peculiarities of a student's development. The pedagogical process in the conditions of

innovative schools is accompanied by the impact on students of a number of unfavorable factors of the school environment, namely, increased academic workload, complication of curricula, irregularities in the school timetable, insufficient lighting, etc. In 2002-2003 a comparative analysis was made of the number of children with myopia in comprehensive schools and gymnasiums. Among pupils of gymnasiums, vision loss was found in 24.8%, while the proportion of myopia among all causes of reduced vision is 68.1%. In comprehensive schools, visual impairment was found in 18.1% of the total number of respondents and myopia accounted for 63.7%. [17]

Despite many studies on this topic in the world, the epidemiological evidence on the relationship between refractive errors and lifestyle among school-aged children in Kazakhstan is generally insufficient.

Purpose: to study the structure of refractive errors in schoolchildren of Almaty and to conduct a comparative analysis with data from previous years.

Methods: The study was carried out in in 4 schools of Almaty with different levels of study load: a comprehensive school, a school-gymnasium and a specialized boarding school for gifted children in sports (SBSGCS). The study included students of 1st, 5th, and 9th grades, total 1175 schoolchildren with a mean age of 11.6±3.4 years (range 6-16 years). The boys were 575 (49%), girls - 600 (51%). Pupils of comprehensive schools were 411, gymnasium schools - 764.

The distribution of children by school and grades is presented in table 1.

Table 1 Distribution of children under school and

All children underwent a standard ophthalmological examination: the measurement of visual acuity (unaided and best-corrected) and refractive status before and after cycloplegia, the determination of relative accommodation stock, slit lamp examination, and ophthalmoscopy.

Visual acuities were measured by ophthalmologists using the Sivcev chart. This chart was placed on a wall 5 meters away from the child being examined. Each eye was measured separately, starting with the child's right eye by covering the left eye; then the same procedure was repeated for the left eye by covering the right. The examiners registered the smallest line which the child correctly read more than half the letters.

To obtain cycloplegia used a solution of 1% cyclopentalate. Two drops of the cycloplegic drug were administered 10 minutes apart. Refractive status was determined by the average of three consecutive autorefraction measurements by skiascopy and autorefractometry. The spherical equivalent (SE) of the refractive error was calculated by standard as: the spherical power plus half the magnitude of the cylinder power.

+0.5 D SE. Habitually-excessive accommodation strain (HEAS) was defined as the gap between manifest and cycloplegic refraction of more than 0.5 diopters.

Results. As a result of the examination of 1,175 schoolchildren, a decrease in vision in one or both eyes were detected in 380 students, which amounted to 32.3%. Ophthalmologic examination of these students in most cases revealed myopic refraction in 195 children (51.3%). In second place is accommodation disturbance in the form of accommodation spasm and habitually-excessive accommodation strain (HEAS), which occurred in 139 students (36.6%). In third place is hypermetropia in 24 (6.3%) and in 22 schoolchildren mixed astigmatism (5.8%) was detected.

In the distribution of schoolchildren with myopia by age, a well- known pattern was confirmed, according to which there is an increase in the number of short-sighted when a student moves from grade to grade.

A comparative analysis of myopic refraction between different types of schools did not reveal significant differences at the level of the smallest (5.7% in grade 1) and secondary schools (20.5% vs. 17.8%). However, among pupils of the 9th grade of the gymnasium, the number of myopic children reached 37.3%, whereas in the comprehensive school this number was at the level of 23%.

Table 2 presents the distribution of the number of pupils in the 1st, 5th and 9th grades with reduced vision in nosologies.

And if 15 years ago in pupils of the 1st grade she met in 1.8% of cases from the total number of those examined, then at present the percentage of first-graders with myopia has increased to

The number of students with myopia in different grades

Figure 1 - The number of students with myopia in different grades

than 2 times and amounted to 36.5% (Figure 2). Given the fact that accommodation disturbances (HEAS) often lead to the development of true myopia, we should expect in the future even greater growth in the number of children with myopia. 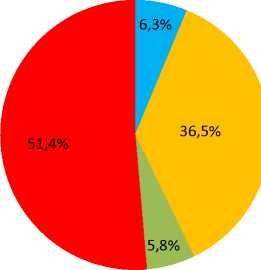 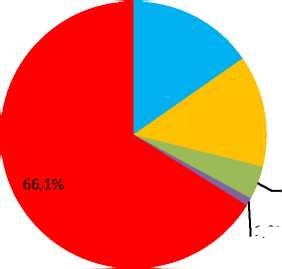 Conclusion. Thus, refraction is still the main cause of visual impairment in schoolchildren. With in-depth examination in cases where myopic refraction was detected in 51.3%. In second place - accommodation disorders - in 36.6%. In third place is hypermetropia - 6.3%. In other cases, mixed astigmatism was detected (5.8%). A comparative analysis of 15-year-old data showed an increase in the number of schoolchildren with close probabilities in all age groups. Among first-grade students, this figure increased by 3.16 times, at the middle level - by 1.52 times and in the high grade - by 1.44 times.