Is prp effective in acute and postsurgical wounds healing? (review)

Platelet-rich plasma (PRP) is a blood product with a high platelet level that is widely applicable in different branches of medicine nowadays [1, 2]. The purpose of this study was to answer the question: “Would the application of PRP be effective in acute and postsurgical wounds healing?” based on the results of studies.

Material and methods: The literature search was conducted through MEDLINE, EBSCO, Cochrane Databasefor the termsPRP, Platelet Rich Plasma, Platelet therapy, Wound Healing, Acute wounds.Articles relating to the use of platelet rich plasma in surgery and wound healing after 2006 were included.

Results: Among 141 studies 37 were devoted to studies of the use of PRP in animals and 44 in humans. Controlled studies have shown a significant positive effect of PRP on the healing of acute and postoperative wounds. Nevertheless, two controlled studies did not show differences between two study groups.

Conclusion: In most studies, the effectiveness of PRP in acute and postoperative wounds healing was proven.The positive effect of PRP on the rate of epithelialization and the reduction of complications in the postoperative period was noted.

Autologous platelet-rich plasma (PRP) is a blood product that is widely applicable in different domains of medicine such as traumatology, sports medicine, general surgery, gynecology, dermatology, ophthalmology, dentistry and plastic surgery. Published studies indicate that administration of PRP directly into the wound or its application on the wound surface is recognized as successful choice of the treatment method in various cases of wounds'etiology [1-4]. It is evidenced that PRP plays an important role in physiological regeneration [5].

Despite the fact that a wide range of clinical studies confirm the considerable impact of PRP on wounds' healing, there are studies, showing absence or limited efficiencyof plasma treatment. Inconsistency of results about efficient usage of PRP shows necessity for further analyzes of collected data.

The usage of PRP represents in some cases the method of choice for setting off natural regeneration mechanisms owed to growth promoting substance in platelets [6]. PRP is a convenient and safe biological "tool", accelerating regenerative processes through launching all parts of the natural regeneration processes simultaneously and acting on them synergistically [7].

Purpose: To study the effectiveness of autologous platelet rich plasma usage on the healing of acute and postsurgical wounds with reference to the world literature.

Inclusion criteria:uncontrolled and controlled studies (randomized, prospective, retrospective with evaluation of the results of the usage of platelet-rich plasma in the treatment of wounds);full text scientific articlein English language; articles published after 2006; controlled trials with platelet-rich plasma application in the primary group and no treatment or treatment with standard method in the control group;articles presenting studies on rich plasma application in acute wound healing process.

Exclusion criteria: abstracts, repeating articles; articles published before 2006; non-English articles; case reports;review articles;combination of PRP-therapy with other treatment methods in the primary group; articles reporting in vitro studies. The process of selection of data and their analysis comprises a number of steps following an algorithm focused on three major referent points: the type of wounds, the treatment method applied and the clinical outcome (Figure 1).

The search started by using keywords. The total number of relevant titles was 940, including 208 full-text original articles, which had been finally selected for the analysis. Hereafter among the selected articles in English from the period after 2006 only 141 works had been chosen. Among them 27 were presenting in vitro research, 37 studies on animals and 44 clinical trials on humans. In addition there were 9 case report studies and 24 review articles (Figure 2). 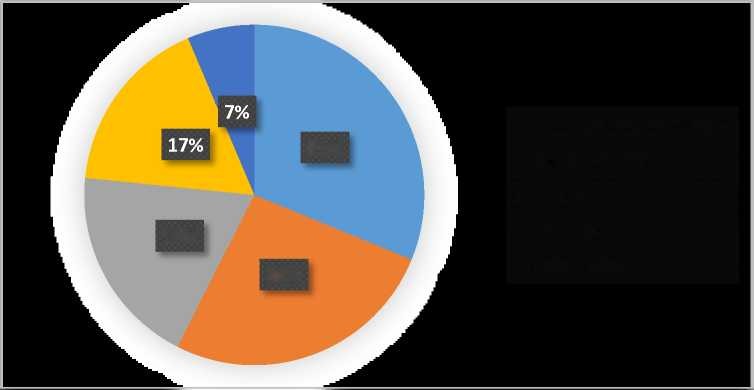 Figure 2 - The structure of scientific research of platelet-rich plasma

44 clinical trials on humans consisted of 22 uncontrolled and 22 controlled trials. As the purpose of this study was to answer the question: “Would the application of PRP be effective in acute and postsurgical wounds healing?”We determined the field of medicine in all presented clinical trials, which describe use of PRP. Thus, 10 works have been devoted to the study of the usage of PRP in the treatment of chronic ulcers of the lower extremities

Figure 3 - The field of medicine, where the results of the study of the efficacy of platelet-rich plasma are presented 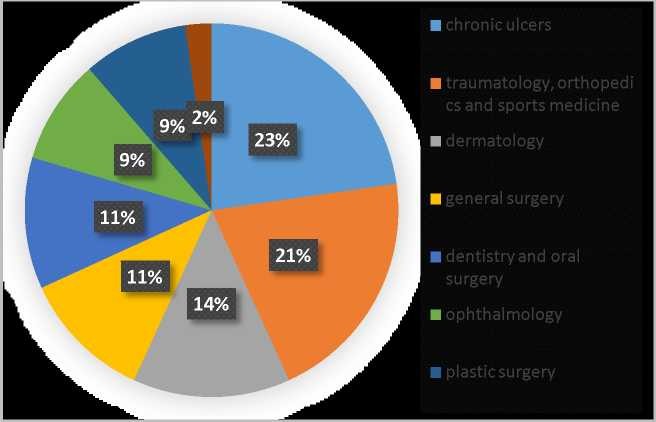 We were interested in studies held on animals and humans. Preference was given to those works which purpose was to determine the efficacy of platelet-rich plasma in the healing of various acute and postsurgical wounds. Despite the fact that controlled studies obtain the greater reliability, we have also separately considered uncontrolled studies held on humans. Several studies - Han. (2007), Molina-Minano (2009), Ostvar (2015), Cho-HeeJee (2016), Hom (2007), Kazakos (2008), Spyridakis (2009), Kakudo (2011),Iervolino (2013), Prochazka (2014) give statistically-significant evidences that the use of PRP leads to the acceleration of wounds healing and other positive effects [8 - 17]. Three controlled studies held by Lee (2008),Khalafi (2008), Danielsen (2008) have not revealed any differences in the speed of wound healing [18 - 20] and level of pain in early postoperative period [21]. One of the studies, focused on the quality of life and the measurement of pain during the postoperative period also stated the absence of differences between the results in two groups [22]. Nevertheless, the application of histological techniques confirmed the acceleration of wound healing process in experimental animal studies [9 - 11](see Table 1).

However, most of publications showed positive results of the platelet-rich plasma application, affecting the rate of healing. Part of the works supports the conclusion with the results of the histological study, according to which the use of autologous plasma contributed to the early appearance of granulation, accelerating epithelialization and stimulating angiogenesis process in wounds [12,17].

Thus, among the published studies, some of which included extensive sampling frame, the results were often contradictory. Nevertheless, most studies have established that PRP had a significantly positive impact on the rate of surgical and acute wounds healing, transplanted flap survival indicators of flaps during reconstructive operations [17, 20].

With the increase of our understanding of platelet-rich plasma action on the healing of acute wounds, the usage of autologous plasma can improve the healing of soft tissue at surgical patients. If the application of platelet rich plasma accelerates healing of acute wounds of the soft tissues, it can prevent and reduce some postoperative complications, especially, in the case, where the complications caused by slow regeneration process [12].

In most studies authors noted effectiveness of platelet rich plasma in acceleration of acute wound healing[8 - 17]. Some of them shows interesting observation on reducing complications [17, 21]. All studies anyway shows that the acceleration of wound healing caused by action of growth factors contained in platelets of plasma.

Areas of misunderstanding and misbelieves: within one study authors show the efficacy of platelet rich plasma in reducing complications - wound infection, but no effect on the rate of healing [21]. The number of research subjects in some studies was large, in others was small (although the study was controlled). That's why it was difficult to compare the results of these studies. In different studies authors use different protocols to obtain platelet-rich plasma, there is no standard protocol. Different countries use different methods. Some authors use the plasma in the form of applications, others irrigate wound with platelet rich plasms before suturing or inject it directly to the wounds.