Actual issues of neuroendovascular aid to patients with cerebral aneurves

Relevance of the research.

One of the most important problems of public health and health care of any country is the deterioration of the health of the population, in particular, the rejuvenation of patients with cardiovascular disease, disability, and a significant increase in mortality of young individuals. The current stage of development medical and social processes in the Republic of Kazakhstan (RK) due to the steady trend of annual growth of the index of mortality due to cardiovascular disease (CVD) [1, 2, 3].

According to estimates of the WHO's (World health organization) report «Global burden of disease» in the world annually kills about 57 million people, of whom 36 million due to noncommunicable diseases, among which the leading place is occupied by cardiovascular diseases [4, 5, 6, 7] (figure 1).

The aim of the research.

The aim of our work is the consideration of the basic problems of improving the organization neuroendovascular care for patients with cerebral aneurysms in a multidisciplinary hospital-based phasing of its provision.

Materials and methods of the research.

According to the world Health Organization, cardiovascular disease to date is a fifth place in the global pattern of mortality and while maintaining current trends, by 2020 they will be released in the first place. Today every year from cardiovascular disease die more than 17 million people. The greatest number of patients and deaths occur among males aged between 35 and 65 years. If we do not change the situation, by 2020 year this figure worldwide will reach 20 million a year [8].

According to the World Health Organization, disease the leading cause of death worldwide in the circulatory system are coronary heart disease. Every year more than 7 million people die due to this disease, which is 12.8% of all deaths. A high proportion of death worldwide and stroke [9].

In the CIS countries, mortality from cerebrovascular disease - remains one of the highest in the world, the trend of disability from stroke [10]. 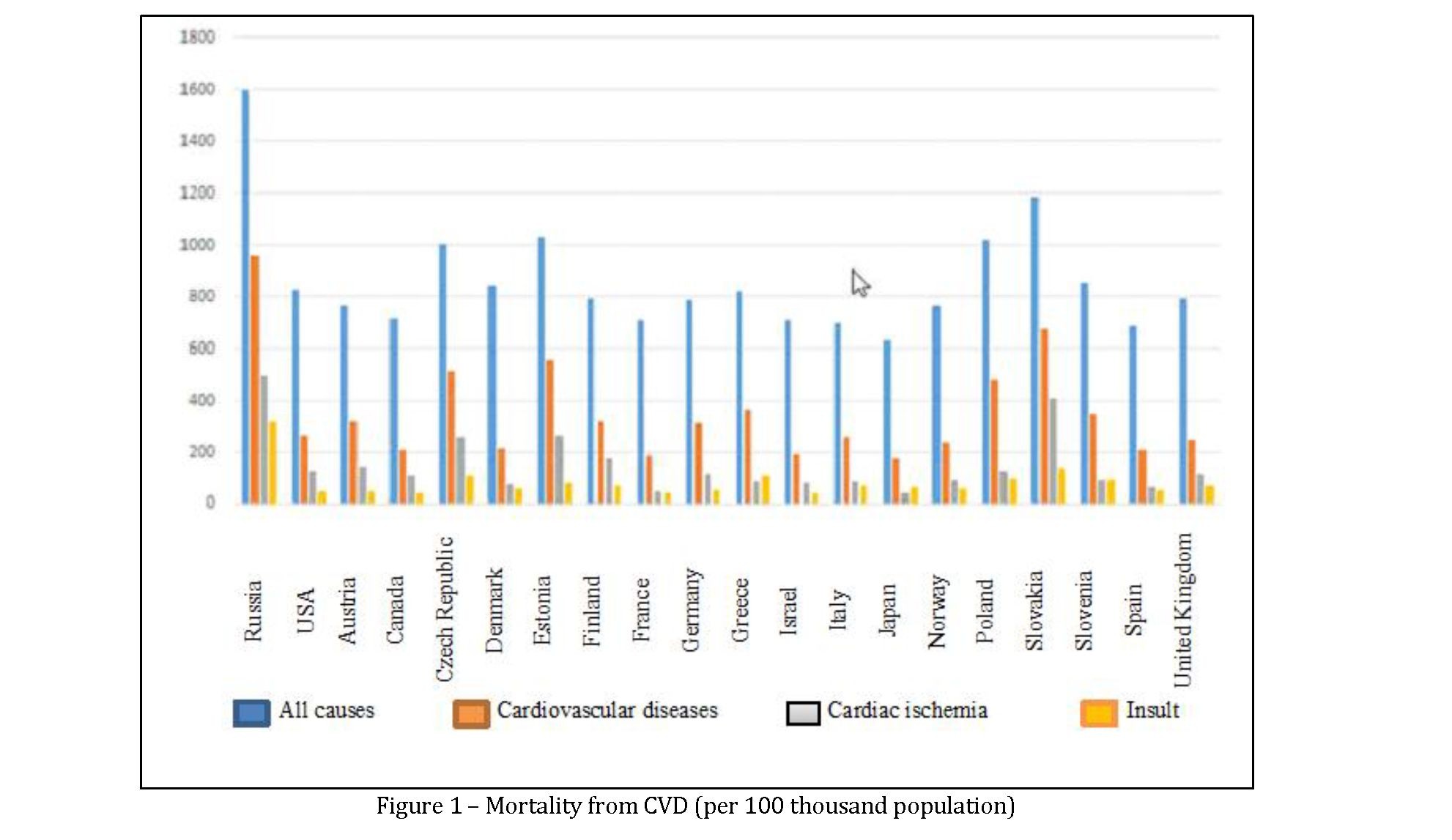 In the last quarter of a century Kazakhstan gets first place in terms of mortality from diseases of the circulatory system among the countries of the European Union, Central and Eastern Europe and Central Asia region. According to the Institute of cardiology and internal diseases of Kazakhstan, the mortality rate from diseases of the circulatory system in our country long ago reached the appalling figures of 500-600 cases per 100 thousand inhabitants. Registered in the country, nearly two million people (12% of the population) suffering from cardiovascular disease.

In Kazakhstan, the stroke sick about 49000 people a year. According to the Kazakh national Association for combating stroke, 52 percent of patients with this illness people of working age. Every day only in Almaty was recorded on the 10 -11 of the stroke cases in which 2 — 3 people die. Mortality in stroke high - to 34.6-38%.

According to the Institute of cardiology and internal diseases for the years 2015-2016, the leading indicators of diseases of the circulatory system - the residents of Almaty and North Kazakhstan region (figure 2).

In the end, the level of mortality from the Central exhibition hall of Kazakhstan occupies the first place in the world almost across the age range. Thus, standardized coefficients of mortality among men of working age (25-64 years old) in Kazakhstan are the highest in comparison with the former Soviet republics.

According to epidemiological studies of the Kazakh national Association for combating stroke (KazNACS) a leading place in the structure of mortality from TSVB is acute cerebrovascular accident (CVA), and brain stroke, which specific weight is 84,6 %. Currently in Kazakhstan the death rate from stroke is 1.08% per 1000 of the population and occupies the 3rd place after Russia (1,17%). Subsequently, the level of annual risk of death in this group of patients is more than 9 %. Stroke is also the leading cause of disability of the population. One of the main risks of acute disorders of cerebral circulation (stroke) is a cerebral aneurysm that is 5 - 10 cases per 100 000 inhabitants per year.

All the above facts indicate that cerebrovascular disease is, in essence, being a global epidemic, creates a complex of problems, not only medical and social, but also national level. Reaching its peak in working age, CEH cause not only a significant depletion of the labour resource of the country but also cause serious economic damage estimated loss in gross domestic product (GDP) due to premature mortality, disability and temporary disability of the population.

Nowadays, to reduce the mortality from cardiovascular diseases in Kazakhstan in the framework of the state Program of healthcare development «Densaulyk» for the years 2016-2019 introduced the integrated model of medical care for 5 major diseases that significantly affect the demographics of the population, including in acute myocardial infarction and stroke. However, despite recent advances in experimental and clinical medical science and practice based on the identification of a number of pathogenetic mechanisms involved in the development of cerebrovascular diseases, in many cases, clinical criteria and diagnostic methods do not provide a clear diagnosis in a timely manner, and even more to create an effective program of preventive measures. In turn, this determines the need of formation of complex activities and programmes neuroendovascular patient care TSVB.

Neuroendovascular assistance is an organization minimally invasive repair of vascular ducts, if a patient is having vascular diseases, e.g., aneurysm, or varicose of veins. This area of medical care gives the opportunity to avoid holistic surgical intervention in open vessels, and thus prevent the development in patients of different pathologies. Rehabilitation after endovascular care is markedly reduced compared with conventional invasive techniques, which is beneficial to health, especially the elderly, who are particularly very vulnerable to disease.

Taking everything into account, topicality of the research consists in necessity of formation of rational methods and organizational models for neuroendovascular patients with TSVB, especially in the early development stages of cerebral aneurysms, allowing a high degree of reliability of the results and data verification in a timely manner to predict the possibility of pathological changes, and to provide a complex effect on the largest possible number of sections, compensation of the disease.