Spirometric parameters (FVC and FEV1) are influenced by several factors and generally valid prediction equations have been never defined in particular for healthy children and adolescents. Spirometric data in urban-rural children and teens from Kazakhstan are reported in this study. Experimental FVC and FEV1 were predicted taking into account of height, age, ethnic group (Kazakh, Russian), living environment (urban, rural) and several other anthropometric parameters. The sample was constituted by 1,926 males and 1,967 females aged 7-18 years.

Introduction. Living environment slightly affected spirometric values. In spirometric prediction equations for both sexes and both FVC and FEV1 height explained almost all variance, but inspiratory chest circumference and age gave significant contribution to the model. Moreover, Russians had higher values of FVC/FEV1 than Kazakhs and also ethnic group was inserted in prediction equations. Finally, literature models that better predicted FVC/FEV1 of our population arose from developed countries, while models deriving from more specific populations had lower predictive power. Modernization had only a slight effect on lung function that was mainly predicted by anthropometric variables (height in particular), age and also ethnic group. Our model was in line with other models reported in literature.

On the basis of available data, several spirometric predictive equations have been extrapolated from healthy subjects to define a “normal range” of spirometric parameters and abnormal values have been related with different lung diseases at different severity degrees. In the general population, FVC and FEV1 have been mainly related with height and age, but also with weight and body mass index (BMI) and other BW components [1-3]. Moreover, sometimes additional anthropometric variables have been considered, but generally they have slightly improved the accuracy of prediction of the model used [4].

Spirometric values can be influenced by genetic factors and ethnic differences [5, 6] but also by environmental pollution, nutrition status, exercise and altitude, so a definitive and unique regression model valid for all populations has never been recognized. The definition of spirometric standard curves for a correct diagnosis of early lung diseases is of particular relevance for children and adolescents because they are particular sensible to environmental and lifestyle changes [7]. Moreover, the transition between childhood and adults implies non-linearity in the relationship between lung function and height, complicating the regression model [8, 9].

Here, we report spirometric data collected inside the project KHAN-ES (Kazakhstan Health and Nutrition Examination Survey) in the major former Soviet republic of Central Asia, Kazakhstan. Kazakhstan is undergoing a rapid modernization process and in this project the study of the differences between children and adolescents living in urban centres and in rural villages represents a great opportunity to relate anthropometric and clinical data with urbanization and modernization with consequent changes in the traditional lifestyle. Moreover, the multi-ethnicity of Kazakhstan can give the possibility to study the influence of ethnic group on spirometric values.

Aims of the study were:

- To compare our model with most recent models coming from different populations present in literature.

The measure of lung function in children and adolescents living in Kazakhstan was a part of the project KHAN-ES, male and female children of the two main ethnic groups of Kazakhstan, i.e. Kazakh and Russian, were studied between 2010 and 2012. They were aged 7 to 18 years and resided either in Almaty and Chilik. Almaty is the biggest city of Kazakhstan while Chilik is a rural village located at about 150 km NE from Almaty. We collected a convenience sample of about 50 children for every combination of gender (male vs. female), environment (Almaty vs. Chilik), ethnic group (Kazakh vs. Russian) and age (7-18), for a total of 4,808 children. Children without mental impairment or serious acute or chronic diseases and siblings to another child already enrolled in the study were recruited and measured at local schools. The study was conducted in conformity with the declaration of Helsinki and the protocol was approved by scientific committee of Kazakh Academy of Sciences. The parents of children and adults aged ≥ 18 years gave written informed consent to participate to the study. 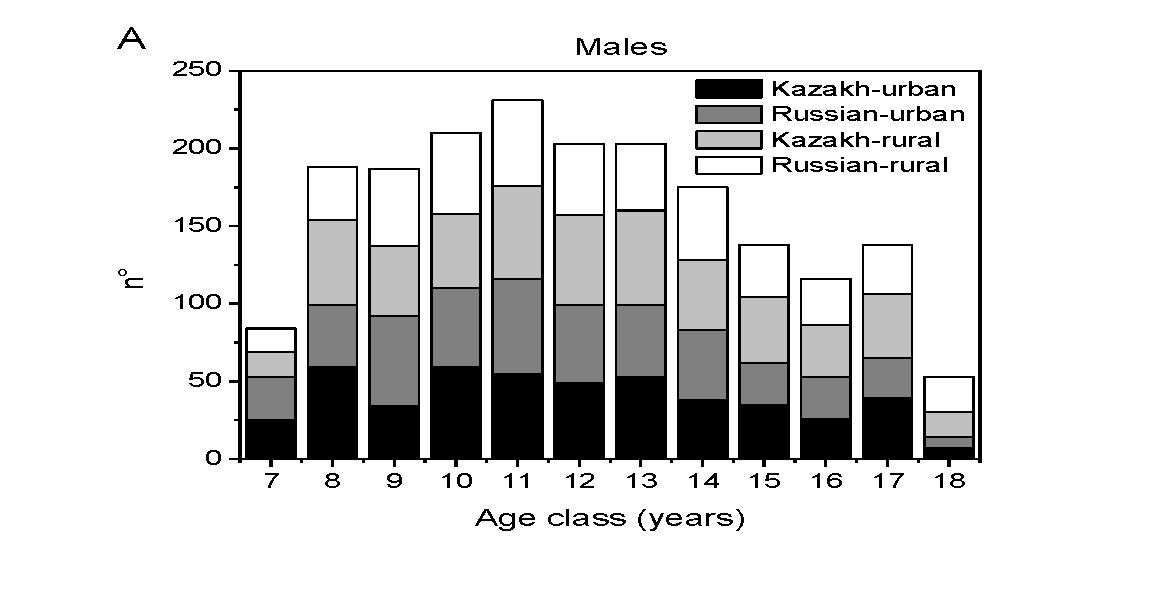 In figure 1a and 1b, the distribution of males and females of the selected cases with age is presented.

All the anthropometric variables were considered at the start of multiple regression model creation. 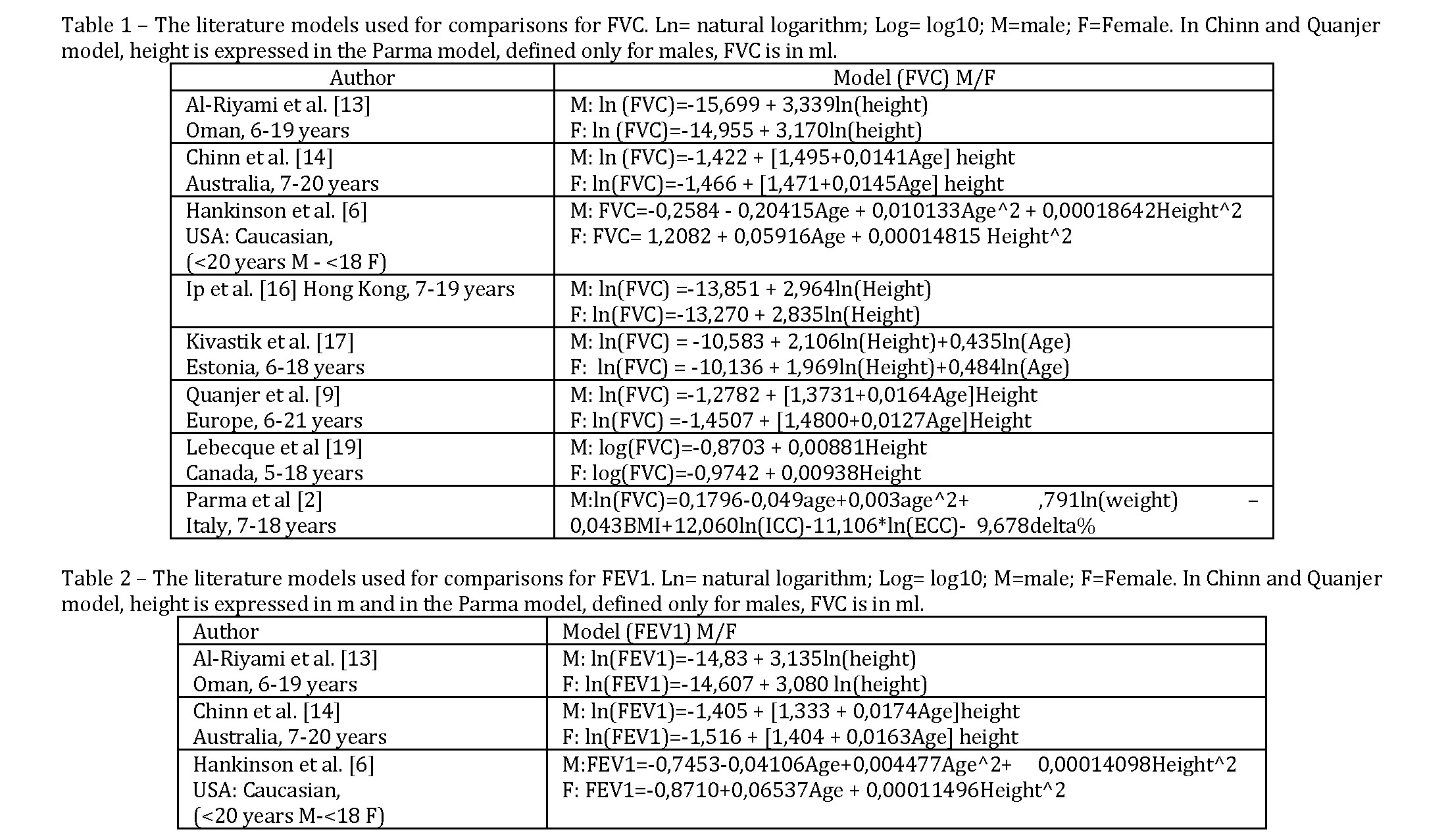 Statistical Analysis. The statistical analysis was performed with SPSS 13.0 software (SPSS, USA). Prediction equations for spirometric parameters were preliminary developed using forward stepwise multiple regression and all the anthropometric variables, age (continuous variable in years), living environment (0=urban; 1=rural) and ethnic group (0=Kazakh; 1=Russian) were inserted in the analysis, distinguishing between males and females. Among all the possible transformations of variables, the log10 transformation of respiratory parameters using all the independent variables as linear seemed to be a good compromise, because no variation in the R square was observed transforming also independent variables (log10, polynomial, interaction in particular between height and age). Variables were included or excluded in the model not only on the basis of significance and the contribution to total R square, but also on the basis of multicollinearity looking at the values of VIF (Variance Inflation Factor). Only models with VIF values <10 for all independent variables were considered valid.

Our best fit model was compared with several models proposed in literature (see tables 1 and 2) looking at median value of %predicted for FVC and FEV1 and the difference between 5th and 95th percentiles. Moreover, we propose Bland-Altman graph [12] on logarithms to more deeply investigate the deviations from experimental model.

Results. Definition of a model for FEV1 and FVC

Among the excluded variables, the variable living environment didn`t contributed significantly to the R square value and among all variables it had the lowest significance. However, if added to the model, the contribution was significant as positive coefficient (p=0,002).

The best fit model for logarithm of female FVC, with an overall R square of 0,766 contained the variables height (0,735), ICC (additional 0,019), ethnic group (additional 0,007) and age (additional 0,005) and all were highly significant (p<0,001). Obviously, other anthropometric variables were correlated with FVC; however, they were excluded from the model because of multicollinearity in particular with height. The final equation of the model is: Log(FVC) = -0,710 + 0,00477height + 0,00407ICC + 0,0257ethnic + 0,00744age [2]. Among the excluded variables, the variable living environment did not considerably contribute to the R square value and among all variables, it had the lowest significance. However, if added to the model, the contribution was significant as positive coefficient (p=0,009). In other words, FVC of rural females was significantly but higher than urban ones.

A comparison with literature Using the models presented in tables 1 and 2, % predicted values of FVC and FEV1 as 5th, 10th, 25th, 50th, 75th, 90th, 95th percentiles and the difference in % between 95th and 5th percentiles (% variability or ∆) are presented in table 3A-D. Moreover, we also calculated the difference between median and expected value if the model was perfect (100%). This variable is called “Dev50”. The model of Parma et al [2] (defined only for males) was used only for FEV1 and not FVC, because of a probable error in the intercept value (0,176, while we would expect a value between 1,5 and 2,5). 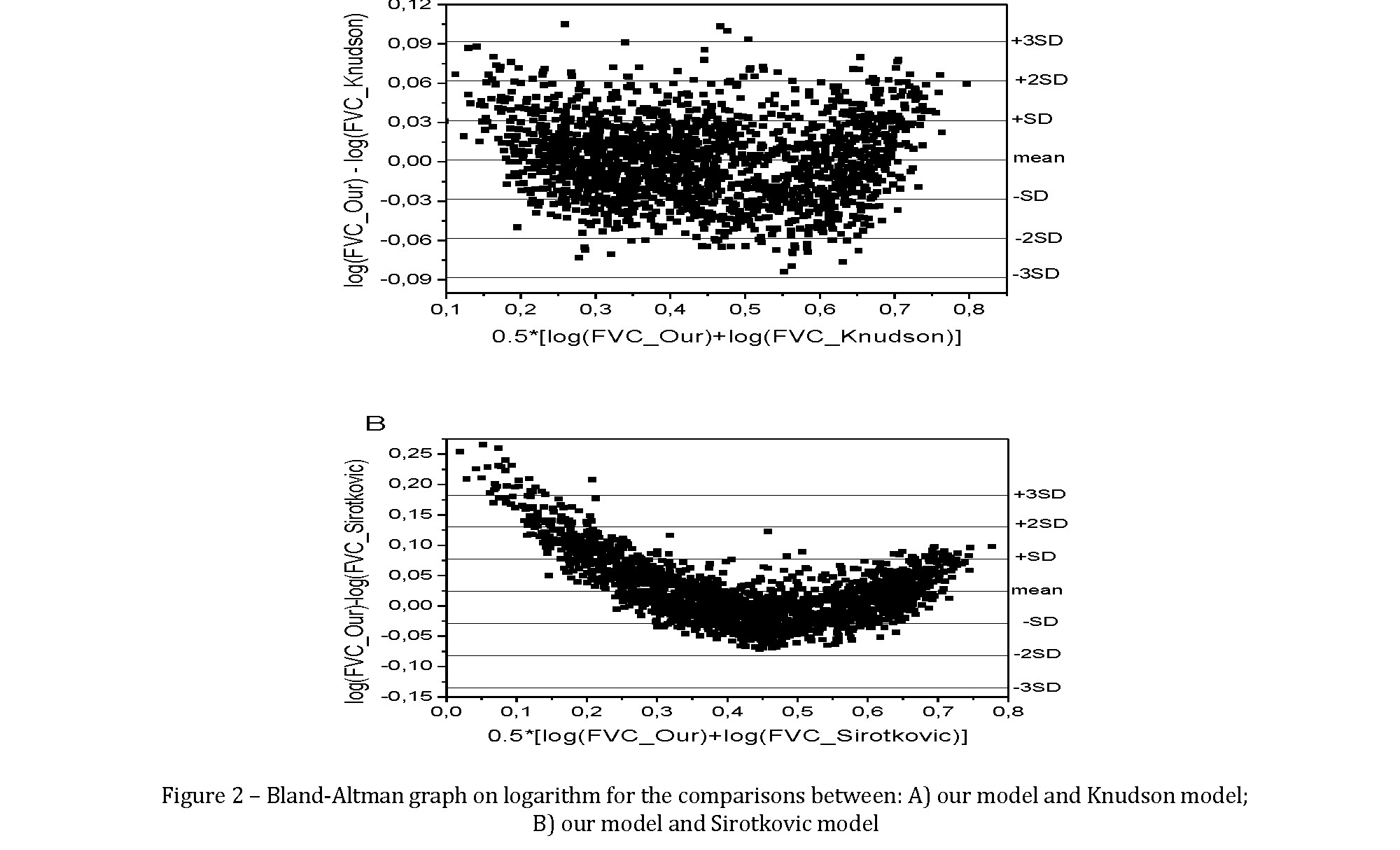 For male FEV1, the models of Parma and also Quanjer provided a good estimation of variability and median, quite near to A experimental model, while for female FEV1 the Quanjer model had a predictive power similar to experimental model.

The Bland-Altman graph to compare different models as an example, in figures 2A and 2B the Bland-Altman graphs presenting the comparison between our model for male FVC and a good model, Knudson, and another model (Sirotkovic) that presented higher deviation.

Non-linearity of residual trend, only slightly present for the first comparison, was dramatically evident for the second comparison: Sirotkovic model tended to underestimate FVC values at lowest and highest FVC values, and the trend of residuals is absolutely not linear around the median value. Moreover, median and SD for deviations in the first comparison (0,0016Ã0,03) were clearly both much lower than the second comparison (0,024Ã0,05). Obviously, this type of comparison is possible for all presented models.

Discussion. This study is a part of KHAN-ES project, aimed at evaluating the contribution of living environment, ethnic group and gender to different anthropometric and clinical parameters in children and adolescent living in Kazakhstan, a rapidly modernizing ex-Soviet state of Central Asia.

Here, we concentrated the attention about the possible influencing factors of the most widely used spirometric parameters (FEV1 and FVC) in healthy children and adolescents, followed by a further comparison with mathematical predictive models present in literature.

It is known that exposure to air pollutants can affect the lung function during the major development period (10-18 years) and FEV1 is negative correlated with several environmental contaminants [20]. Moreover, air pollution in the residence area can be associated to the causal chain of reactions leading to retardation in pulmonary function growth during the preadolescence [21]. In fact, in our multiple regression models only in the case of MMF 25-75 for females we observed a modest contribution to the R square of the model. Nevertheless, FVC

tended to be slightly higher in rural than in urban environment for both sexes, while the trend was the opposite for MMF 25-75 only for females. On the other hand, living environment did not have a significant effect on FEV1 for both sexes and MMF 25-75 for males. Therefore, at this stage of analysis it is impossible to tract definitive conclusions about the relation between air pollution and reduction of pulmonary function in Kazakhstan. Our results are quite in line with what observed in Italy [22]. In particular, while in Nigeria no variation of spirometric parameters has been found in urban or rural communities [23], a significant reduction in pulmonary function was observed in 511 y urban children living in Iran as compared to rural counterpart [24]. So, a lot of factors could explain these discrepancies and even if a higher concentration of air pollutants is generally expected in urban environment or in any case in more industrialized areas [25], the environmental risk factors for airway diseases in rural communities in America have been well described [26] and in non-urban children risk factors for asthma are similar to risk factors in urban children [27].

Our linear models confirmed that most important variable to predict FVC and FEV1 is height but some anthropometric parameters, like ICC, can slightly improve the R square value of the model.

Our study also confirmed that age was highly significant, even if its contribution to R square was modest, but more importantly Russians of both sexes had higher values of FVC and FEV1 (not MMF 25-75) than Kazakhs, and this is the first work able to distinguish between children and adolescents of Mongolian and Caucasian origin. Another study about a general sample of Mongolian and Caucasian population with lower number of subjects of any age was unable to find it [28]. So, ethnic group could be added to general model of FVC/FEV1 to better predict lung function. MMF 25-75 prediction equations had lower values of R square, as already observed [2].

After the definition of a model to predict FVC/FEV1, a validation with most recent models present in literature was necessary (Table 1 and 2). First of all, a good qualitative method to comparison is to test the power of the model to predict the median % predicted FVC/FEV1 values (expected 100%) and the variability of the predicted values (e.g. the difference between 95th and 5th percentiles).

In conclusion, while urban and rural environment only slightly affected spirometric values (in particular FVC), spirometric prediction equations primarily depended by height (for both sexes and both FVC and FEV1) with a modest but significant contribution of inspiratory chest circumference and age. Moreover, Russians presented in general higher values of FVC/FEV1 than Kazakhs and ethnic group was inserted in prediction equations.

Finally, literature models that better predicted FVC/FEV1 of our population have been defined for whites in developed countries, while models deriving from more specific populations had lower performing power. Bland-Altman graph can be a good approach to compare two different prediction models.