The problem of modeling the relationship between the structure and the biological activity of organic compounds is one of the urgent mathematical problems of chemistry. To find quantitative correlations of the structure – anti-inflammatory activity in the isostructural series of substituted 9-thioacridone, acridinyl-9-thioacetic acids and 9-hydrazine acridine the molecular connectivity indices calculated for the given molecular structures have been used. The correlation equations of lgA – f(æR) relationship with the convincing statistical characteristics have been determined. They will be used for the molecular design of active pharmacophores.

Determination of the quantitative relationship between the structure and its biological activity is one of the most important tasks of designing pharmacologically active substances. Formation of this relationship is the only reasonable alternative to the very expensive total screening. As a tool the graph theoretical and topological representations playing an increasing important role in various chemical and pharmaceutical studies can be used [1, 2, 3].

Molecular structures of organic compounds are in fact graphs, in which atoms are vertices, and covalent chemical bonds are edges. Such a graph describes the connectivity of atoms in the molecular skeleton regardless of metric features, i.e. the equilibrium internuclear distances, valence angles, etc., corresponding to the

where Vi,Vj - are the vertex degrees of i and j in the graph; the summation is carried out for all edges of the graph.

The molecular connectivity index is universal and contains information about the size, branching, number of cycles, unsaturation and the presence of heteroatoms in the molecule. The molecular connectivity index is one of the simplest topological indices, and it has been successfully applied to predict anesthesia of amphetamines, the antiarrhythmic action of substituted N-(diisopropyl)-diphenylpropylamines, toxicity of barbiturates, etc. [4].

To predict the biological activity of acridine derivatives the graph theory has not been applied. Therefore, calculation of topological lgA = 4.273 - chemical structure. Therefore, graph theoretical description reflects those features of the molecular structure that depend on the connectivity as opposed to properties conditioned by the precise geometric arrangement of atoms constituting the molecule in space. It is in this meaning that chemical graphs are topological (but not geometrical) values of molecular structures. Thus, the chemical graph describes the topology of the molecule. Numeric indices derived from topological characteristics of the corresponding chemical graphs are called topological indices.

One of the most successfully used topological indices to determine quantitative relationships of the structure - biological activity is the molecular connectivity index æR introduced by Randić:

indices of acridine derivatives and correlation of these values with various types of the biological activity is of great theoretical and practical interest.

The relationship of the anti-inflammatory activity of some substituted 9-thioacridone, acridinyl-9-thioacetic acids and 9- hydrazine acridine with the connectivity indices of their molecules has been analyzed. The measure of the biological response is lgA. Both its values and the corresponding molecular connectivity indices of compounds are given in Table.

Equation (2) is statistically significant. From this it follows that (Fig.). Reliability of the prediction according to equation (2) is the anti-inflammatory activity of substituted 9-thioacridone illustrated by data of Table.

This equation is statistically significant; its parameters indicate that increase of the molecular connectivity index leads to decrease of the anti-inflammatory activity of acridinyl-9- thioacetic acids.

Equation (4) has sufficiently reliable statistical characteristics. In the given homological series the anti-inflammatory activity of compounds also decreases with increase of the molecular connectivity index. The values for lgA calculated by equation (4) are quite close to the experimental values (Table).

The anti-inflammatory activity was studied on the model of formalin paw edema in mice. The edema was caused by subplantar introduction of 0.01 ml of 3% aqueous solution of formalin in the hind limb of the animals in the experimental and control groups. The compounds studied or the reference drug (diclofenac sodium) were introduced intraperitoneally 40 min before induction of the pain response. The control group of mice received the same amount of saline solution with the emulsifier Tween-80. After the injection of formalin solution the mice were placed in a cage and observed for 40 min recording the time spent by the animals for licking the swollen limb. The antinociceptive activity was judged by the ability of the compounds under study to reduce the time of the swollen limb licking [5].

Correlation analysis was carried out according to the microstatistics [6]. 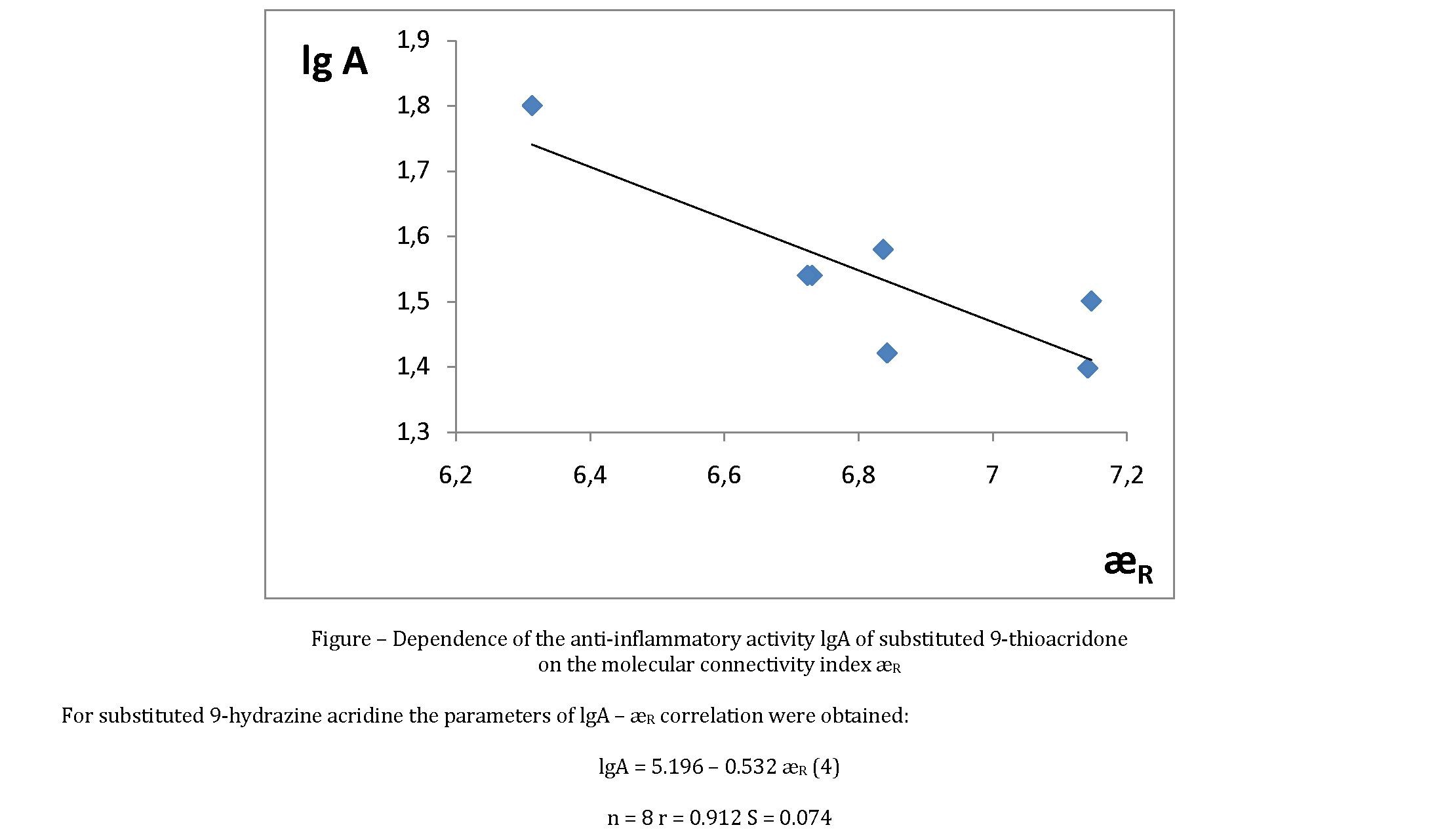