Screening study of anti-inflammatory and psychoactive properties of the derivatives of 3-benzyl-2-thio-5- methyl-4-oxo-3,4-dihydrothieno[2,3-d]pyrimidine-6-carboxylic acid

The anti-inflammatory activity for the promising according to PASS prediction 2-mercapto-4-oxo-3,4-dihydrothieno[2,3-d]pyrimidine-6- carboxylic acid derivatives was studied using carrageenan-induced rat paw edema. In order to prove the mechanism of pharmacological action the modeling of the studied compounds binding with the COX-1 and COX-2 using Autodock Vina program was performed. The computer calculations showed that all of the compounds do not interact effectively with both isoforms of cyclooxygenase. These calculations confirmed the absence of anti-cyclooxygenase mechanism of the tested compounds action. No influence of the synthesized compounds on the central nervous system (locomotor, exploring reactions and emotional reactivity) was ascertained using the open field test.

The derivatives of 2-mercapto-4-oxo-3,4-dihydrothieno[2,3- d]pyrimidine-6-carboxylic acid were reported as the ligands of serotonin receptors [1]; some of the similar compounds are known to be radioprotective and anti-cancer agents [2,3]. The compounds with such structural fragment were also reported as antimicrobials and HIF prolyl hydroxylase inhibitor, useful for treatment of anemia [5]. The series of the papers also describe some derivatives of the similar structure as the substances with non-steroidal anti-inflammatory effect [6,7]. Considering the promising pharmacological opportunities and the results of virtual PASS prediction for the 3-benzyl-2-thio-5-methyl-4-oxo-

tetrahydrothieno[2,3-d]pyrimidine-6-carboxylate 2 (2 g) was dissolved in 7 ml of 10% sodium hydroxide solution and the mixture was stirred at 50°С for 10-12 hours. Then the cool reaction mixture was acidified with 1 ml of acetic acid. The precipitate formed was filtered off and washed with plenty of cold water.

Carrageenan-induced rat paw edema was induced by subplantar injection of 0,1 of 1% fresh solution of carrageenan in distilled water into the right-hind paws of each rat [11]. The white albino rats (180-220 g) were used in the experiment. Tablets «Ortofen» produced by the Pharmaceutical company ''Zdorovie'', Ltd. (Kharkiv, Ukraine, series 571112) were used as the reference drug (8 mg per kg dosage); such dose is equal ED50 for the antiexudative effect. The dosage of «Ortofen» was calculated by Yu.R.Rybolovlev's method [11], using the daily dosage in human. The screened compounds were administrated orally (dosage 10 mg per kg) in the form of suspension stabilized with Twin-80 (1 hour before carragenan injection). The animals from the positive control group were treated with the distilled water in the amount equivalent to their mass. Paw thickness was measured after 1, 2, 3, 4 and 5 hours, with the mechanical oncometer. Anti-inflammatory activity (AIA) activity as % was estimated by the ability of the tested compound to suppress the inflammatory reaction in experimental animals vs control ones. Calculation was performed according to the following formula:

Psychoactive properties of the tested compounds 2 and 5 were studied using the open field test using female albino rats (180-200 g). After randomization the negative control group animals were treated with distilled water in the amount equivalent to their mass. The experimental groups animals were orally treated with the tested compounds (dosages 3 mg per kg and 10 mg per kg). The test was performed after 40 minutes period. The following generally accepted behavioral acts were estimated: locomotor activity, exploring reactions and emotional reactivity. For the integral estimation of all of the behavioral reactions the sum of activities was calculated [11]. The psychoactive properties was evaluated by the changes in locomotor activity, exploring reactions and emotional reactivity of the experimental animals comparatively with the control group animals [11].

Computer modeling and docking studies were performed using the following computer programs: ISISDraw 2.3, Discovery studio Visualizer 4.0, Python molecule viewer and Autodock Vina. Docking was calculated for the flexible ligands and rigid models of proteins. Crystallographic data for COX-1 (PDB ID 1EQG) and COX-2 (PDB ID1CX2) proteins were obtained from the Protein Data Bank [12]. Water molecules and ligands were removed from the protein molecule along with the chains B, C and D. The calibration of the system was performed using the crystallographic data for Ibuprofen complex with COX-1 and results of docking calculations for Ibuprofen molecule model and COX-2.

Synthesis of the compounds, which were further used in pharmacological studies, was performed starting from diethyl 3- methyl-5-{[(methylthio)carbonothioyl]amino}thiophene-2,4- dicarboxylate 1 [8,9,10]. At the first step the compound 1 was cyclized with benzylamine in DMF producing ethyl 3-benzyl-5- methyl-4-oxo-2-thioxo-1,2,3,4-tetrahydrothieno[2,3- d]pyrimidine-6-carboxylate 2 [10]. Further modification of the compound 2 was performed either by alkylation of the sulfur atom in position 2 or by hydrolysis of the carbethoxy group of thieno[2,3-d]pyrimidine system. As the result of these transformations 2-S-alkyl derivatives 3 and 4 and the acid 5 were obtained (scheme).

According to the predicted activity and the previous study of the similar compounds of thieno[2,3-d]pyrimidine series [13,14] we have performed the screening of anti-inflammatory for the synthesized compounds 2-5 and the psychoactive properties for the compounds 2 and 5 [11].

Administration of the compound 2 (dosage 10 mg/kg) evidently decreased the paw edema against the control pathology group after the first and third hours of the experiment (39% and 31%), but the activity of this compound was lower than the same of “Ortofen”.

The data obtained show that the highest anti-inflammatory activity for the tested compounds 4 and 5 is determined during the period, when inflammation mediators are biogenic amines and kinins (the first hour); the compound 2 displayed its activity in the periods of biogenic amines, kinins and prostaglandins (the first and the third hours) release. Analysis of the antiinflammatory dynamics for the screened compounds in the carrageenan-induced rat paw edema test showed that most of them (except compound 2) have no effect of the production of prostaglandins, which deny possibility of anti-cyclooxygenase mechanism of their action.

From the other side, the absence of the influence on the prostaglandin phase of inflammation decreases the ulcerogenic effect for the tested compounds, which is typical for most of COX inhibitors [15]. This may be considered as a valuable advantage of the tested compounds as potential non-steroidal antiinflammatory drugs. 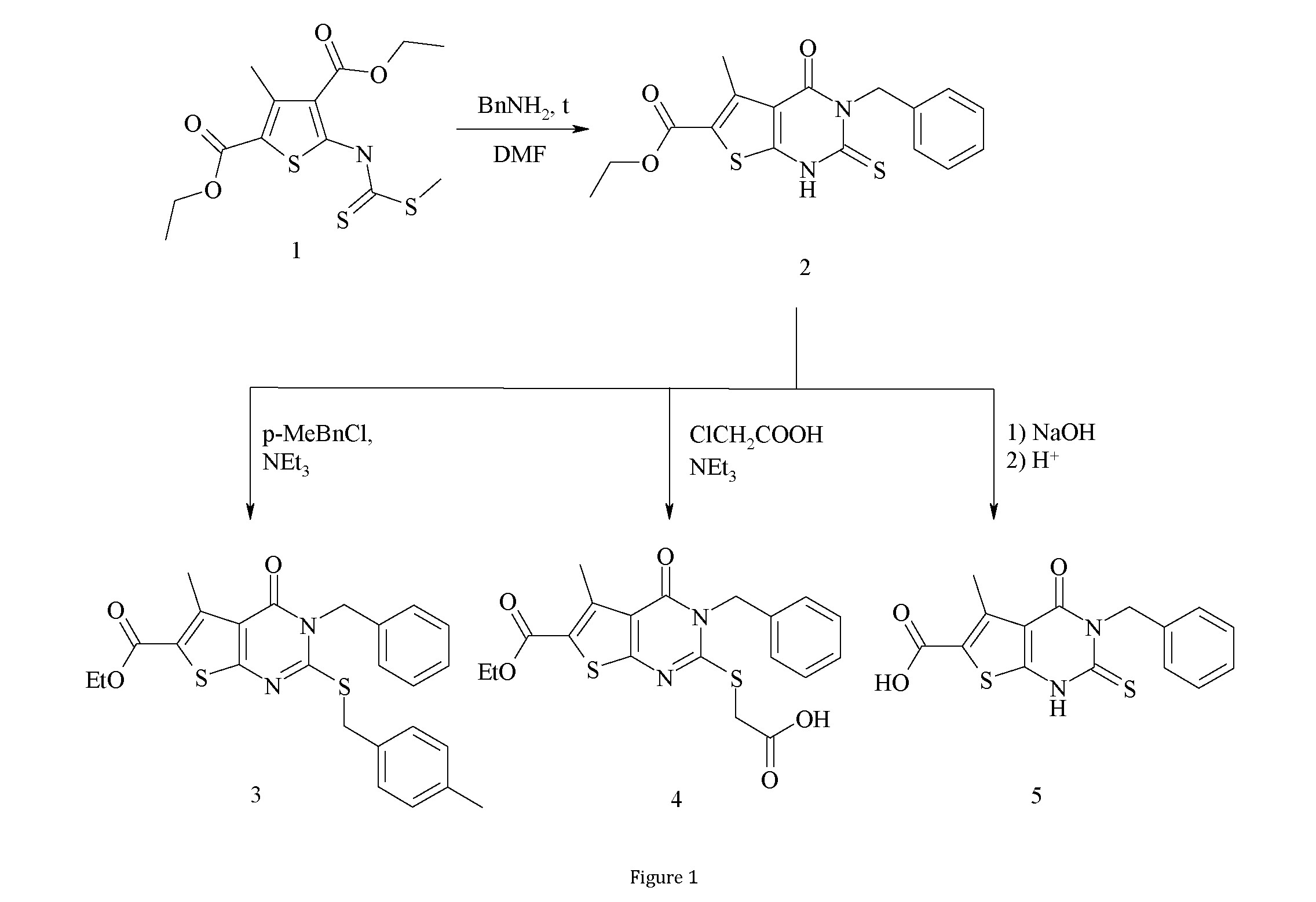 In order to investigate the results obtained using the experimental carrageenan-induced rat paw edema model and to analyze the possibility of their application in human therapy, the docking studies of the experimental compounds binding with the enzymes, known to be the typical targets for non-steroidal antiinflammatory drugs (NSAIDs) have been performed.

We have performed molecular docking studies by using in silico analysis of the compounds 2-5 with the active site of COX-1 and COX-2 isoforms of cyclooxygenase. The date known about the binding pattern between protein and the molecules of NSAIDs, suggests that most of the COX-inhibitors interact with the following monoacids: His-90, Arg-120, Tyr-355, Tyr-385, Arg- 513, Val-523 and Ser-530 [16,17,18,19]. For the selective COX-2 inhibitors binding with several regions is important such as hydrophobic one (Tyr-385, Trp-387, Phe-518, Ala-201, Tyr-248 and Leu352), hydrophilic (Arg-120, Glu-524, Tyr-355) and additional interaction with His-90, Arg-513, Val-523 fragment [16]. It is also known that Aspirin reversibly inhibits this enzyme by acetylation of Ser-580 [20]. The results of docking studies show that no any from the listed compounds effectively binds the active sites of the both cyclooxygenase isoforms (table 2). Probably the possible binding with one or two aminoacids of the active site is not enough to inhibit the enzyme. The calculations confirm the weak anti-inflammatory effect of the tested compounds and the absence of anti-cyclooxygenase mechanism of their action.

Table 2 - The results of docking studies of 3-benzyl-2-thio-5-methyl-4-oxo-3,4-dihydrothieno[2,3-d]pyrimidine-6-carboxylic acid derivatives

The PASS prediction also indicated the possible psychoactive properties for the compounds 2 and 5. One of the most popular and meaningful test to determine this type of activity is the open field test [11]. The results of screening as to the sum of activities compared with activities of negative control animals indicate the absence of the compounds 2 and 5 influence on the exploring reactions and emotional reactivity of the experimental animals (table 3). The increase in the dosage of the compound 2 up to 10 mg/kg evidently decreased only the number of defecations (emotional activity index).

The results of the investigation performed, allowed to identify two the most promising compounds from the series of 3-benzyl- 2-thio-5-methyl-4-oxo-3,4-dihydrothieno[2,3-d]pyrimidine-6- carboxylic acid derivatives with anti-inflammatory activity. The mechanism of their action probably includes suppression of such inflammatory agents as kinins and biogenic amines release. The docking study of the compounds 2-5 binding with COX-1 and COX-2 active sites showed no effective interaction of the screened compounds with the both isoforms of the enzyme, which is the additional evidence for the absence of anticyclooxygenase mechanism of the tested compounds action. The results of the open field test screening for compounds 2 and 5 showed no influence on the central nervous system (locomotor, exploring reactions and emotional reactivity).