Localization of different lymphocyte's population in the spleen, which were detected by monoclonal antibodies

The detailed studies of immunoarchitektonity and cytoarchitecture of the immune system normally necessary in connection with the development and creation of new immunomodulators and new generations of antibiotics for preclinical testing which necessarily requires the morphological and immunohistochemical analysis of structural and functional changes in the lymphoid organs of laboratory animals.

The advantage of IHC over flow cytometry is the fact, that objects of investigation can be analyzed retrospectively, because the material which was fixed in formalin and filled with paraffin can be used after finishing of some parts of investigations. It is very important because earlier IHC investigations were making only on frizzed cryostat section, were the safety of antigenic epitopes suffered noticeably. (K.J. Randall, G. Pearse, 2008).

The investigation's purpose - to detect the cytoarchitectonity features of white pulp's T- and B- cellular compartments in the rat's spleen.

Material and methods. The investigation was made at the six sexually mature rats. The serial paraffin slicesofthe spleen,fixed in formalin, with the width 5 mcm were colored by immunohistochemical monoclonal antibodies agains CD1a, CD3, CD4, CD8, CD 20, CD23, and also by myeloperoxidase for detecting neutrophils and eosonophils.

The unmasking was in the buffer with pH 9.0 in the apparat PT LINK DAKO, during 20 minutes . The reaction's setting was in Autostainer Link 48 DAKO with using systems of visualization En Vision Flex+Mouse (Link). The tint- En Vision flex hematoxylin.

Dehydration was in three changes of ethanol and the enlightenment in the O-xilol .

The conclusion was in the integumentary environment MOUNTQUICK . The slices were colored by hematoxylin and eosin for control.

Results: The white pulp of the mammalian spleen is divided into lymphoid periarterialclutch, lymphoid nodules and marginal zone.

As distinct from spleen of human and mammals, for rats spleen characteristically clearly distinguished, when stained with hematoxylin and eosin and Giemsa or hematoxylin-II-eosin sections of white pulp - B- and T- dependent zone mantle zone (crown) and also marginal sinus and marginal zone.

On sections CD1a positive cells with intense antigen-antibody reaction, and localized in the membranes in the cytoplasm, revealed in the subcapsular zone of the periphery of the body of the spleen. They were presented with large cells round, oval or polygonal shape with eccentrically arranged nuclei, and with many branched processes on the membrane (“dendrite cells”) The vast majority of cells forming periarterial lymphoid clutch displayed a positive response to CD3, high density of that cells observed along inner margin of PALM closer to wall of central artery.

Identification of CD4+ cells using antibodies MoAb (SP35) showed that all of the T-helper expressed with the antigenantibody reaction on the membranes located at the outer edge of the marginal zone at the interface with red pulp.

CD8+ (T-NK marker), detected using an antibody MoAb (SP16) observed in the form of individual clusters in the red pulp. Antigen-antibody reaction, localized in the membranes as well as in the cytoplasm, revealed a high staining intensity from brown to black. Particularly high intensity of the reaction of CD8+ cells was observed along the venous sinuses of the red pulp forming cruciform plexus, the so-called “crisscross vessels”.

In carrying out the reaction using antibody MoAb (SP32) detected on CD20 + a clear antigen-antibody reaction in the form of intense coloration membranes of mature B-lymphocytes in a large amount, a high bulk density in the filling zone and the marginal zone of lymphoid nodules (Fig.1).

CD23+ follicular dendritic cells and germinal centers identified using antibodies MoAb (SP23), were observed in the red pulp in only one case, as the spherical shape of a single cluster as a unit in the center of the emerging lymphoid nodules (Fig 2).

Thus, various lymphocyte populations are distinct in their specific location of the multi-splenic parenchyma

Conclusions: 1. Lymphocyte's different populations have a distinct localization in the spleen's parenchyma.

2. IHC let us to detect not only lymphocyte's phenotype, but theirs' functional condition.

3.The spleen's parenchyma has an expressed zonal features of structure.

4.Immunophetyping of lymphocyte's T- and B- cellular compartments by using IHC method confirms the hypothesis of “Krieken”, about the fact , that every zone of the spleen(camera) has an own unique structure and function. 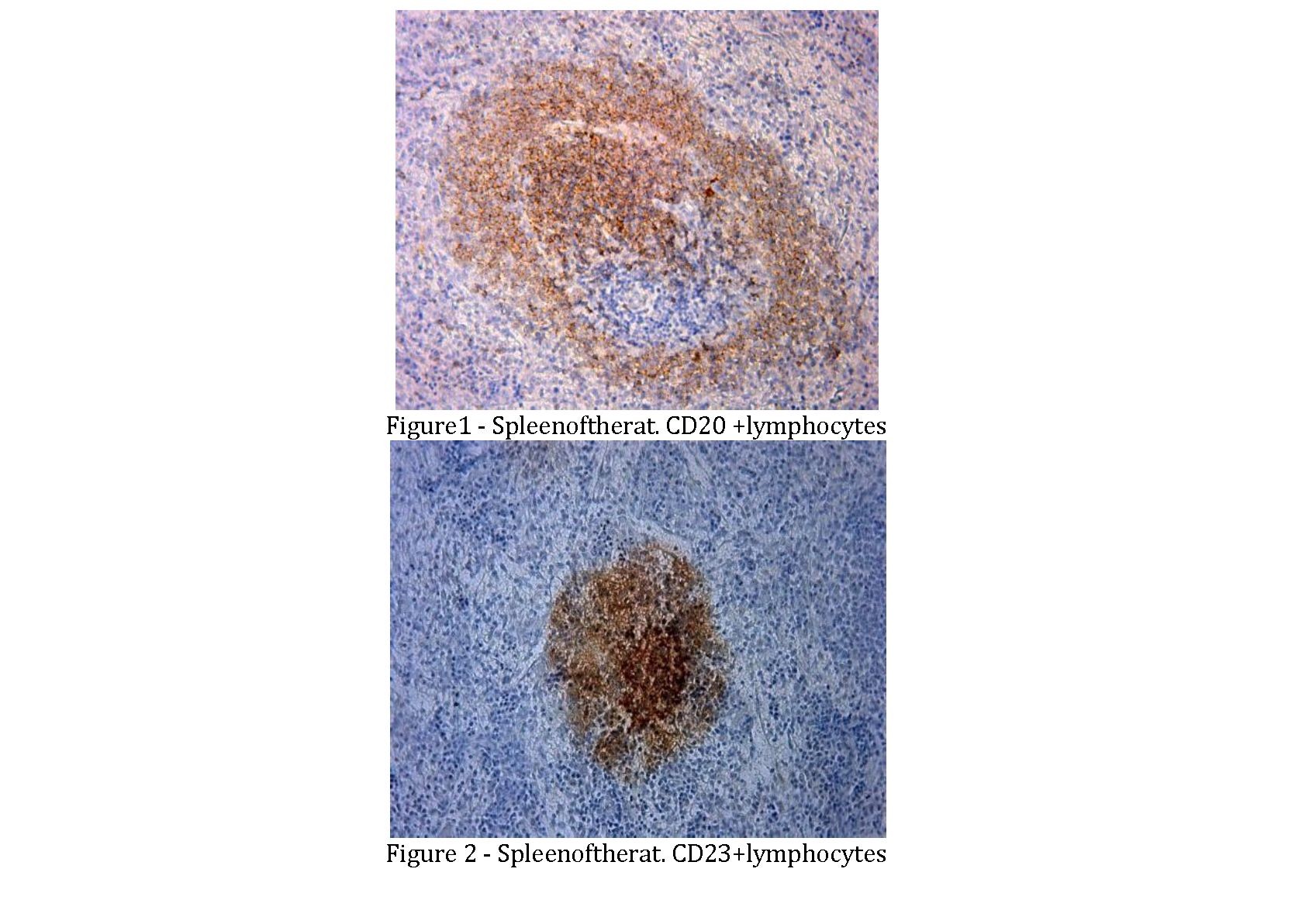