High-performance liquid chromatography for the determination of clozapine in urine

A method has been proposed for the determination of clozapine (CLZ) in human urine by dispersive liquid-liquid microextraction (DLLME) in combination with high-performance liquid chromatography-ultraviolet detector (HPLC-UV). All important variables influencing the extraction efficiency were investigated and optimized. Under the optimal conditions, the limit of detection (LODs) and quantification (LOQs) of the method were 13 and 39 ng/mL for CLZ. The relative standard deviations (RSDs) of CLZ was less than 5.1% (C=0.100 mg/mL, n=9). Good linear behaviors over the tested concentration ranges were obtained with the values of R2>0.999. The absolute extraction efficiency of CLZ from the spiked blank urine samples were 98.3%.

Clozapine (CLZ), a piperidine derivative of the dibenzodiazepine family, is an atypical antipsychotic agent with proven efficacy in the management of refractory schizophrenia [1]. However, CLZ in overdose cause some serious side effects. For instance, it may increase the risk for granulocytopenia and agranulocytosis [2]. Moreover, consuming alcohol may increase the toxic effect of CLZ, or even result fatality [3]. Therefore, in order to minimize the side reactions (or even fatality) in the clinical application, biological fluids for CLZ need to be screened by using routine therapeutic drug monitoring (TDM).

The methods for the determination of antipsychotic drugs in biological samples are mainly based on the separation techniques of gas chromatography (GC) [45], capillary electrophoresis (CE) [6], and high- performance liquid chromatography (HPLC) coupled with UV detection [7,8], flame photometric detection (FPD) [4], flame ionization detection (FID) and diodearray detection (DAD) [4,5,9]. Use of some novel hyphenated techniques were also reported, such as LC-MS, and LC-MS-MS [1ō,11]. Nowadays, more and more scientists focus on exploring the application of MS because of its high selectivity and superior sensitivity. However, the high cost involved in the instrumental setup and the sequential instrumental operation maintaining, makes it unaffordable in many settings. Among the aforementioned methods, HPLC-UV is most commonly used mainly due to its low cost and easy accessibility.

Owing to the low concentration of target drugs and the complex matrices in urine samples, the pretreatment of a sample is usually required prior to the instrumental analysis. Conventional sample preparation methods, like liquid-liquid extraction (LLE) [11] and solid phase extraction (SPE) [8], have been applied for the determination of antipsychotic drugs. However, the former tends to be time-consuming and entails a large amount of organic solvent, and the latter needs a specific pump device that can be relatively expensive. Recently, some new micro-extraction techniques, such as hollow fiber-based liquid phase extraction [4], fiber in-tube solid-phase microextraction [6], solid phase extraction disks [12] and molecularly imprinted polymer [13] have been proposed for the separation and pre-concentration of drugs from biological fluids.

Dispersive liquid-liquid microextraction (DLLME), as a novel liquid microextraction with less solvent consumption, was reported by Rezaee et al in 2ōō6, and it is considered to be a green sample pretreatment [14]. DLLME is based on a ternary component solvents extraction system, including dispersive solvent, extraction solvent and aqueous samples containing target analyte. It possesses many advantages: simple, rapid, cheap, high enrichment factor, high recovery, etc. Up to now, DLLME has been widely applied for the assay of environmental water samples and it also shows good prospect in the analysis of analytes in complex matrices such as biological fluids [15-17].

In the present work, DLLME was employed for the analysis of CLZ in human urine by using HPLC-UV. The factors that affect the extraction and the determination were systematically optimized and some important individual factors, including the volume of extraction solvent, the volume of dispersive solvent and pH, were investigated. Under the optimum condition, the target drug in real human urine was satisfactorily determined.

The control of pH value was achieved by a Delta 32ō pH meter (Mettler Toledo Instruments Co., Ltd., Shanghai, China) supplied with a combined electrode, and an 8ōō electrical centrifuge (Xinhang Instrument Factory, Jintan, China) was used for the centrifugation.

All containers used in this work were made up of high quality glass and washed with high-purity deionized water.

Standart solutions and calibration curves. The individual stock solutions of CLZ was prepared at the concentration of 1.00 mg/ml by dissolving proper amount of its substance in appropriate mobile phase or methanol , and then stored at –20 °C.

The quantitative analysis was performed by the external standard method. A series of urine standards were prepared by diluting proper aliquots of the stock solution with blank urine at desired pH values, and then were subjected to the optimal DLLME procedure. The calibration curve for each a[nalyte was drawn by simple linear regression of each analyte's concentration versus its peak area, and the calibration curve was used to calculate the concentration of analyte in real sample.

DLLME Procedure. The sample solution (10.00 mL) containing the interest was placed in a 15 ml glass test tube with conical bottom. 0.2 ml of ethanol (as disperser solvent) containing 40 mkL carbon tetrachloride (as extraction solvent) was rapidly and vigorously injected into the sample solution using a 1.00 mL syringe. A cloudy water-ethanol-carbon tetrachloride mixture was consequently formed. Then the mixture was gently shaken. In order to separate the phases, the mixture was centrifugated for 2 min at 4000 rpm. After this step, the observed phenomena for different samples were noted. For aqueous standards, the extraction solvent (CCl4) was sedimented at the bottom of the conical test tube. While, for urine samples, white lipid solid was sedimented, probably

due to the co-sedimentation of the urine matrixes (like uric acid, carbamide) at high pH value [17]. In the study, the sedimented phase was dissolved by 0.5 mL methanol after carefully discarding the supernatant solution. Then the extract solution was filtrated through a filter to eliminate the white floccule. Twenty microliter of the extracts was removed by a microsyringe and analyzed at HPLC.

Urine Sample Preparation. A male healthy volunteer, who did not take any medicine within two months, kindly supplied the drug-free urine samples. All the urine samples were stored in a freezer at –20 °C before analysis. Allowing for the complex matrix in urine, the urine sample was centrifuged at 4000 rpm for 15 min to eliminate some floccule after thawing the frozen urine sample at room temperature. The resulting supernatant fluid was transferred to a clean glass tube and its pH value was adjusted to 10.0 by adding 1 or 10 mol/L of NaOH solution.

Optimization of HPLC-UV System. The UV detection wavelength was set at 254 nm according to the literature [8,11]. A C8 column was used for the separation and short analytical time and better resolution were obtained when compared to a C18 column. In order to get the most appropriate mobile phase, different ratio of acetonitrile-water, methanolwater and different concentration of CH3COONH4 or NaH2PO4 in water were studied. Finally, a mixture of CH3COONH4 (0,03 mol/L, pH 5,5)- acetonitrile (60 : 40, v/v) was chosen as the mobile phase to achieve the best resolution factors. In order to evaluate the system suitability, the precisions of peak area and retention time were examined by assessing the intra- and interday precisions of the mixture solutions of the targets at three concentration levels in one day (each six measurements) and in three different days (each three measurements a day), respectively. The results showed that the relative standard deviation values of the peak area and retention time were less than 4,0% (fig. 1).

Selection of Disperser Solvent. For DLLME method, dispersive solvent must be miscible with extraction solvent and water. So, acetonitrile, acetone, ethanol, methanol and isopropyl alcohol were chosen for this purpose. The effects of different kind of disperser solvents on extraction capability of CLZ is presented in figure 2. It indicates that using ethanol as dispersive solvent could attain the highest extraction efficiency and the best extraction precisions for two drugs as compared with the others. Hence, ethanol was chosen as the disperser solvent for the following experiments.

Extraction Efficiency Test. To examine the extraction efficiency of the developed method, three concentration levels (1.00, 2.50, 5.00 mkg/mL, respectively) of the targets were prepared by adding different amounts of the drugs into blank urine, after the DLLME procedure, the determined peak areas were compared with those observed from the non-extracted standards (the relative total amount of the stock drugs were directly diluted to the same volume as the resultant extract). Mean recovery for CLZ was 98.3%.

Validation of the Method. The linearity and sensitivity for the target drugs of the developed method were presented in table 1. The calibration curves were plotted by using spiked urine standards at different concentrations under the optimized DLLME condition.

Limits of detection (LOD) and quantification (LOQ) for each analyte were calculated based on the equations LOD=3.3 s/s, LOQ=10 SD/s, respectively, where SD is the standard deviation (SD, n=3) of the intercept of the regression lines and s is the slope of the calibration graph. The repeatability and reproducibility of the method were the relative standard deviations (RSDs) for nine replicate determinations of a urine sample at 0.100 μg∕mL level of the analytes in one day and in three different days (three times a day), respectively. Table 1 shows that the proposed method had good analytical performance: the RSDs were less than 5.1% 2 and the R values of the proposed method were over 0.999.

Conclusion. A simple, rapid, sensitive method of DLLME coupled with HPLC-UV has been developed for the determination of CLZ in human urine. The method has the advantages of easy operation, simplicity, economy, high enrichment factor, high recovery, and lower detection limit. The proposed approach is potential for toxicological trails. 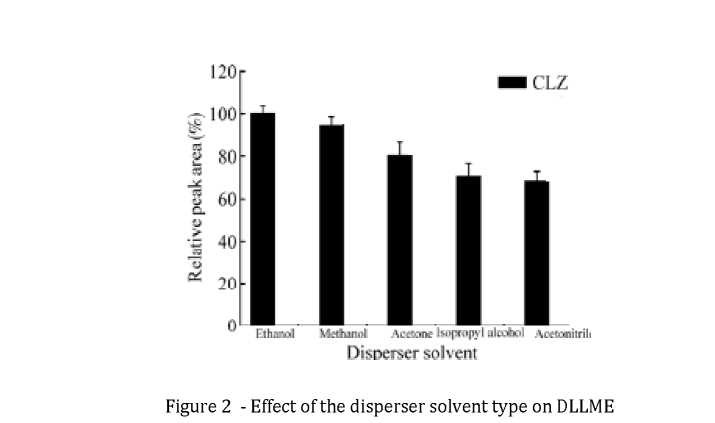