Objective: To test the efficacy of continuous subcutaneous insulin infusion (CSII) by measuring glycemic parameters during the first 12 months of a structured, collaborative Industry/Government/Health Care System program that introduced CSII therapy to children in Kazakhstan.

Conclusion: Children adopting CSII in the context of government-industry collaborations, particularly those with poor glycemic control of diabetes, may realize significant glycemic benefits. The Kazakhstan/Medtronic collaboration provides a model for other initiatives that require rapid deployment and/or massive enrollment for introduction of CSII.

Type 1 diabetes mellitus (T1DM) is a disease usually diagnosed in children and young adults. Treatment always requires exogenous insulin administration due to immune-mediated destruction of insulin-producing cells in the pancreas. Worldwide, from 1990 to 2008, the incidence of T1DM has been increasing by 2.8%to 4.0% per year, similar to that observed in the United States and Europe [1, 2]. Despite all achievements in diabetes treatment in the past two decades, T1DM remains a serious cause of mortality and morbidity in youth [3-4]. The primary goals of treatment of T1DM in children and adolescents are maintenance of near-normoglycemia through intensive insulin therapy, avoidance of acute complications, and prevention of long-term microvascular and macrovascular complications, while facilitating as close to a normal life as possible [5].

The increasing use of insulin pump therapy as a viable alternative to multiple daily injections (MDI) over the last 15 years, particularly in children, is attributable to improvements in pump technology and motivated in part by the results of the Diabetes Control and Complications Trial (DCCT), which established the benefit of improved glycemic control [6, 7]. Ideally, CSII therapy more closely mimics physiological secretion of a healthy pancreas by combining 24-hour continuous adjustable precise “basal” delivery of insulin with prandial-related “boluses” in an effort to eliminate the symptoms and complications of hyperglycemia, while minimizing the risk of hypoglycemia. Several trials have demonstrated that, when compared to MDI, CSII offers better metabolic control as measured by HbA1c and blood glucose variability, fewer hypoglycemic episodes, and improvements in quality of life [8-11].

Many patients are motivated to consider CSII because of recurrent or severe hypoglycemia, the dawn phenomenon, or poor glycemic control. The possibility of more precisely delivering very small doses of insulin and needle phobia are especially important factors for the pediatric population [12, 13].

Figure 1 shows the insulin pump used in this study and the placement of an optional sensor for continuous glucose monitoring (CGM). The pump contains a reservoir of insulin which is connected to an infusion set. The tip of the cannula of the infusion set is placed in the subcutaneous space and replaced every two to three days. There are significant regional variations in CSII use. In the United States, about 40% of patients with type 1 diabetes use pumps. Pumps are used by >15% of type 1 diabetics in Norway, Austria, Germany, and Sweden, but by <5% of patients in Spain, the UK, Finland, and Portugal [14]. Less than 1% of patients Central and Eastern European countries use this therapy.

A collaborative project, Project Baiterek, between Medtronic Diabetes, the Kazakhstan Ministry of Health, and 16 regional pediatric diabetes clinics began in January, 2012 with the goal of improving the glycemic control and quality of life of children with diabetes by introducing them to CSII therapy [15, 16].To date, Project Baiterek has enrolled over 790 children ages 5-15. Here we present interim results of the study, which is ongoing.

This is an observational study with retrospective data analysis. Consent for data to be entered into the registry was obtained from all parents or guardians, and data collection was approved by local ethics committees. Paradigm® Veo insulin pumps (Medtronic MiniMed, Inc.), consumables, rapid acting insulin analogs, blood glucose (BG) meters, and a monthly supply of 30 BG test strips were funded by Ministry of Health.

Pediatric endocrinologists in each region were identified and attended multiple training sessions supported by Medtronic. Initial two-day long pump therapy training was conducted by two internationally recognized pediatric diabetes experts in Kazakhstan. Advanced training in clinical settings was provided in training centers in Israel, Slovenia, Russia, and USA. Multiple follow-up trainings by industry physicians and educators were conducted in Kazakhstan as well as during international congresses in different locations worldwide. All educational materials for physicians and patients were provided in Russian.

Baseline HbA1c measurements were obtained using various methods in local laboratories; follow-up HbA1c measurements were done on the fully automated, CLIA- waived In2it analyzer (Bio-Rad), calibrated to DCCT- equivalent numbers. All children were to have HbA1c determinations during clinic visits every 3 months; HbA1c values closest to each specified time-point were used for analysis. Patients' demographic characteristics (age, gender, race, diabetes duration, and age of diagnosis) were obtained on the initial visit; height and weight were measured at each clinic visit to calculate body mass index (BMI), in kg/m2. Z scores, which represent the number of standard deviations that observed values deviate from a population mean value, were calculated based on age- and gender-specific BMI-for-age data from the Centers for Disease Control. Pump and blood glucose data were uploaded to CareLink (Medtronic) for retrospective analysis. Data are presented as mean ± SD.

Figure 2 shows that at enrollment, the mean Z scores for BMI were negative at baseline and at 12 months for both male and female subjects, indicating underweight compared to age-matched controls. Although the mean Z scores at 12 months were still negative, the magnitude of the weight deficit was less than at baseline, suggesting that many children were “catching up” to their peers.

A report from the Kazakhstan Ministry of Health documented decreases in both severe hypoglycemic events and DKA in the children during calendar year 2012.

By providing a 24-hour preselected but adjustable basal rate of rapid-acting insulin, along with patient-activated mealtime bolus doses, CSII therapy eliminates the need for periodic injections and provides significant improvements in glycemia, compared to MDI therapy, for many patients with T1DM.

Clinical studies in pediatric populations have shown a significant relationship between HbA1c at commencement of insulin pump therapy and the magnitude of HbA1c improvement. Those who began the pump therapy with an HbA1c of <7.5% had no significant improvement [8].

This is the largest study of insulin pump use in children with fairly long follow-up period conducted in the Central and Eastern Europe. Along with earlier published results on 3- and 6- month follow-ups [15, 16], our data confirm that insulin pump therapy improves glycemic control, with improvements being sustained for at least 12 months. Although this was not a randomized controlled trial, it does reflect ‘real life' experience in a large multiethnic population-based sample over a prolonged period and as such provides important information. HbA1c in the cohort of patients with baseline HbA1c greater than 7.5% decreased by 0.85±3.07 percentage points, which correlates with other studies [8, 17-19]. This magnitude of change is clinically significant, as the

DCCT has reported reductions in microvascular complications of 21 to 49% with every 1% reduction in HbA1c [20].

Patients on pump therapy demonstrated significant improvement both in HbA1c and BG level after 12 months of therapy across all age groups regardless of gender, except teenage girls (age 12-15 years old). Adolescent females with T1DM have special concerns that need to be addressed, including psychological distress, typically manifested as anxiety and depression, and a high prevalence of hyperandrogenic conditions [21, 22]. They are also at risk for “diabulimia” in which insulin dosages are manipulated for the purpose of weight loss and which might increase the incidence of serious medical complications later in life [23]. Teenage girls require special attention and additional training to achieve better glycemic outcomes.

In conclusion, use of modern insulin pump devices for the treatment of T1DM in children and adolescents in Kazakhstan demonstrated high clinical effectiveness with therapy during first year of therapy. Children adopting CSII in the context of government-industry collaborations, particularly those with poor glycemic control and longer duration of diabetes, may realize significant glycemic benefits. The Kazakhstan/Medtronic collaboration provides a model for other initiatives that require rapid deployment and/or massive enrollment for introduction of CSII. 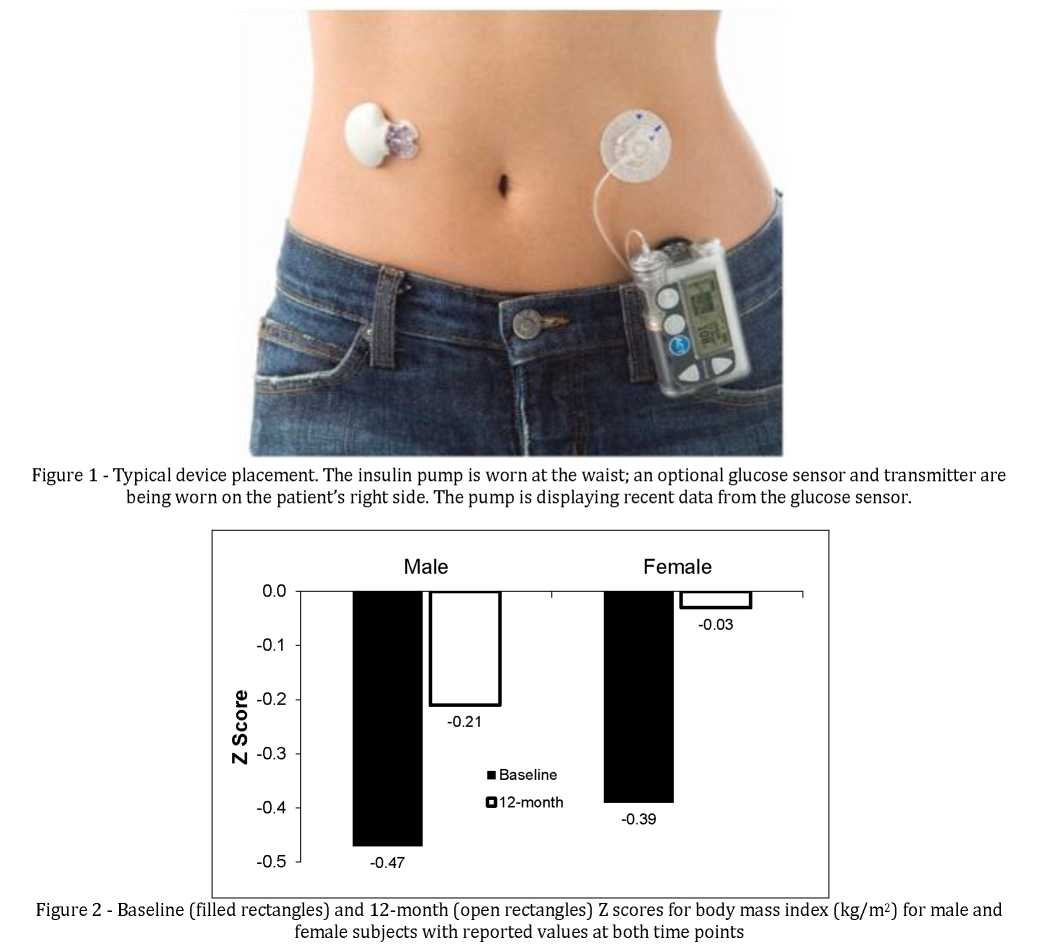 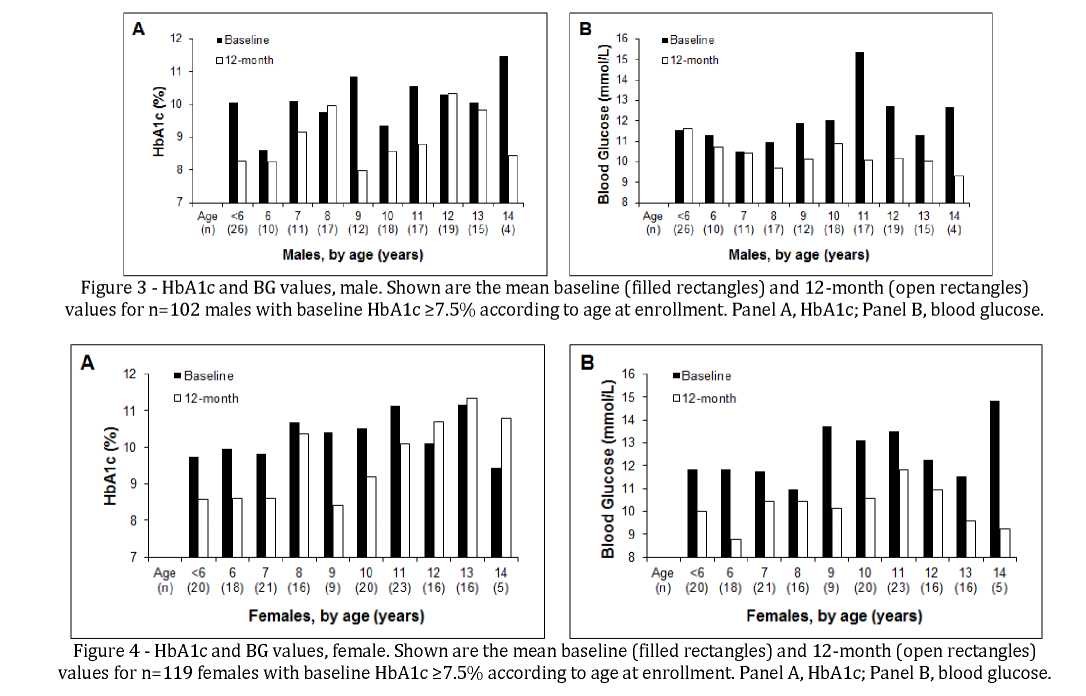