Abstract: 20 years after independence, Kazakhstan has a growing economy, but generally based on natural resources, especially oil. With its environmental legacy from Soviet times, and still having major industrial facilities and processes of Soviet origin, the country has significant pollution problems. The World Health Organization has clearly declared that air pollution is a very significant problem in global health, and that reducing it can significantly reduce the burden of disease. Air pollution health standards in the countries with advanced economies are now primarily based on PM2.5 and partially on PM10, while in Kazakhstan the standard is still based on TSP. Reduction of air pollution in the US was achieved through several major programs, with analyses using health risk assessment and often cost-benefit or cost-effectiveness analysis. After several decades of progress to achieve these standards the US has significantly reduced premature mortality and morbidity from air pollution. These health benefits were achieved while the economy and population continued to grow. In keeping with the objectives of the 2050 Strategy, Kazakhstan could adopt these approaches, potentially improve upon them and make a significant contribution to public health and the economy.

Introduction. Kazakhstan inherited significant environmental problems from its part of the economy of the Soviet Union. Kazakhstan has a similar industrial profile and similar pollution levels with Russia and Ukraine, other countries with significant health burdens from pollution (1, 2). According to a study conducted in 2012, carried out at the Kazakh National Medical University in Almaty, and American University of Washington DC, pollution damages to the environment, expressed in terms of the public health risk is an expected mean of 16,500 and no less than 7,500 premature deaths annually (3). This corresponds to a significant economic loss in terms of GDP in Kazakhstan. These analyses demonstrate the severity of the problem of environmental pollution in Kazakhstan. These health damages are based only on particulate air pollution, and do not include all of the other air pollutants, or any pollution in other media such as water. Actual damages would also include morbidity damages caused by diseases, disability and lost productivity. And furthermore, all of these analyses are based on monitoring of Total Suspended Particles (TSP). In much of the world, air quality monitoring is now based on fine particles, or PM2.5. This is the particle size that is the main source of harm, due to its ability to work its way deep into the lungs. In order to develop the estimates of harm, it was necessary to convert TSP first to PM10 and then to PM2.5. This conversion was carried out using methods developed for earlier studies in Russia and Ukraine (1, 4, 5, 6).

Kazakhstan's population is only about 17,000,000 (7) and thus the demographic situation calls for better measures to preserve public health, increase longevity and quality of life. Environmental quality is one of the critical factors required to improve the current state of socio- economic problems as called for by the Kazakhstan 2050 Strategy (8). Building a post-industrial society in Kazakhstan, based on the introduction and development of new, more advanced technologies and human capital, is incompatible with the existing high levels of environmental pollution. Current levels of environmental pollution may become a serious obstacle to sustained economic growth built on this newer model and thus to the long-term welfare of the population of Kazakhstan.

The process of reducing the burden on the environment is time consuming and requires the mobilization of substantial material and human resources. Environmental objectives "compete" with other major socio- economic problems that also require costly solutions. However, the development and application of advanced technologies for environmental risk assessment and the economic effectiveness and efficiency of risk reduction measures will significantly reduce the negative impact of pollution on the environment. This can support bringing environmental performance to the level of individual risk adopted in the OECD countries.

Background. According to the World Health Organization there are 7 million annual premature deaths worldwide due to air pollution (9), and “Air pollution is a major environmental risk to health. By reducing air pollution levels, we can help countries reduce the global burden of disease from respiratory infections, heart disease, and lung cancer. “And in particular, “PM (particulate matter) affects more people than any other pollutant” (10).

PM exposure can lead to a variety of health effects. For example, numerous studies link PM levels to increased hospital admissions and emergency room visits and even to death from heart or lung diseases. Both long- and short-term particulate exposures have been linked to health problems. Long-term exposures, such as those experienced by people living for many years in areas with high particulate levels, have been associated with problems such as reduced lung function and the development of chronic bronchitis and even premature death. Short-term exposures to particles (hours or days) can aggravate lung disease, causing asthma attacks and acute bronchitis, and may also increase susceptibility to respiratory infections. In people with heart disease, short-term exposures have been linked to heart attacks and arrhythmias (10).

Table 1 - Current standards for particulate matter from the World Health Organization (11), the US Environmental Protection Agency (12) and the European Union (13).

Although there are differences in the standards, the most important observation is that TSP is no longer in use as a measure of particulate pollution. The US set a particulate standard based on TSS in 1971, but by 1987 had completely transitioned to a PM10 standard (14). The first PM2.5 standard was set in the US in 1997. As scientific understanding of the hazard from fine particles has advanced (15), there has been a transition to the use of PM2.5 as the standard for particulate pollution. TSS is simply no longer used for environmental health risk analysis or for monitoring technologies for air quality regulation.

The Reduction of Air Pollution in the US. The first national legislation in the US was the Air Pollution Control Act of 1955; which was then followed by a series of amendments, including the Clean Air Act of 1970, and the Amendments of1977. There was a significant change with the passage of the Clean Air Act Amendments of 1990, which is still today the most recent version of the Act.

In the US, risk assessment had developed as expert practice as an analytical approach towards solving environmental pollution problems. This development of environmental risk analysis techniques started in1985 and created a sound scientific basis for determining the connection between pollution and increased morbidity and mortality. This methodology has been applied and tested extensively in OECD countries; see for example (16). The methods have also been applied in other countries, including Russia and Ukraine (1, 4). Risk analysis has been the analytical basis for much of the improvement in environmental quality in most OECD countries.

The Clean Air Act required the US EPA to set National Ambient Air Quality Standards for six common air pollutants (17). These very common air pollutants (also known as "criteria pollutants") are found all over the United States. They are particulate matter (PM), ground-level ozone, carbon monoxide, sulfur oxides, nitrogen oxides, and lead. Of the six pollutants, PM and ground-level ozone are the most widespread health threats. EPA regulates them by developing human health-based and/or environmentally based criteria for setting permissible levels.

The incremental benefits of the 1990 Clean Air Act (in addition to benefits from 1970 and 1977 legislation) and future predicted benefits are summarized here (18):

Figure 1 shows the long-term trend in the US of emissions from the 6 common air pollutants, CO2 and the simultaneous growth of the economy (19). 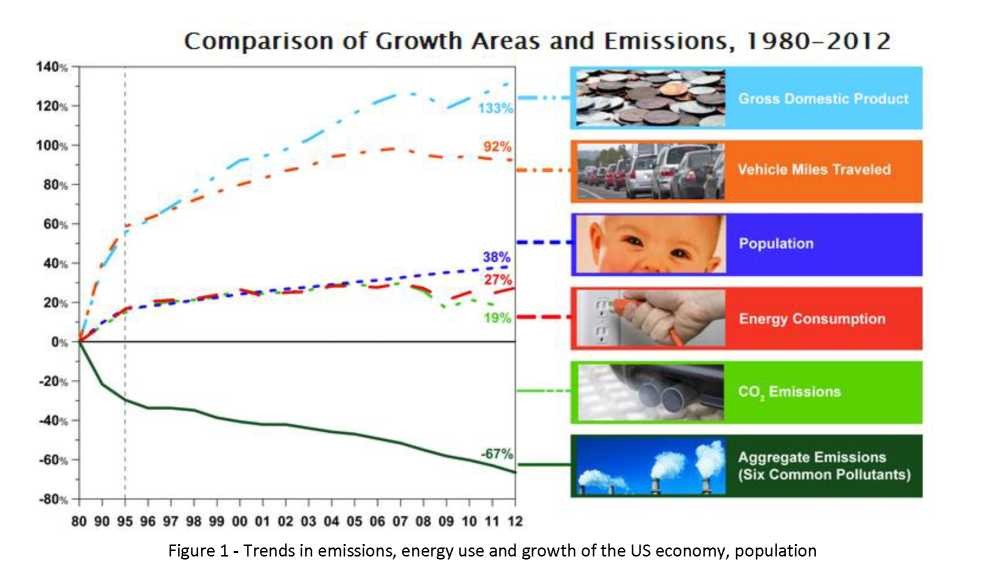 And in addition, there is AirNow, a continuous, real-time air quality monitoring system for PM and ozone across most of the US. The values update hourly and the pollution levels can be viewed online by anyone with an internet connection (20).

Air Pollution and the Role for Advanced Monitoring and Risk Assessment in Kazakhstan.

The widespread nature of particulate pollution in Kazakhstan (3) can be seen in Table 2.

The particulate pollution concentrations, in particular, PM 2.5 (as extrapolated from TSP concentrations) are well above international standards as shown above in Table 1.

Application of risk analysis provides the capability to assess the socio-economic benefits of environmental protection, and provides an objective analytical method for prioritization of environmental measures (21, 22) and to select priority actions to achieve maximum health and economic benefit. World experience shows that a significant proportion of health risks (typically 30%) can be reduced on the basis of well-established low-cost measures. These economically efficient actions generally yield significant benefits and which are significantly higher than their costs. The use of modern technologies for monitoring, modeling, and assessing health risks can be used to create an integrated decision support system. Such an environmental information system could serve as the basis for optimization of environmental investments and could equal or potentially move beyond existing systems in OECD countries.

Conclusions. In the Kazakhstan 2050 strategy (8) the country aspires to become one of the top 30 developed countries. In the section, New Principles of Social Policy, the main goal of the strategy is social security and the well-being of the citizens. Long-term development priorities include continuing economic development and modernization, developing a more knowledge-based economy, improving human capital, quality of life, and public health. Achieving this will also require a gradual convergence to US and EU environmental standards.

But currently, particulate pollution in all of the eleven cities in the previous study of Kazakhstan is significantly higher than international standards (table 2). And in particular, the cities of Almaty and Astana have average PM2.5 concentrations that are more than 5 times higher than the WHO standard. Kazakhstan needs to carry out a series of steps in order to introduce procedures for risk assessment, cost-benefit and cost-effectiveness analysis. These analytical procedures need to part of a decision-making process to achieve standards, but also include interim goals that are feasible in the short-term.

Kazakhstan should 1) create an institutional center for risk analysis; 2) carry out a series of rigorous pilot studies; and 3) build state-of-the-art monitoring and information systems for use by the government and private business. The transition to a lower emission, more advanced economy would be greatly facilitated by this process. Kazakhstan is in a unique position to apply existing international technologies and perhaps develop its own to develop this lower emission, higher technology economy.