The state of health, activity and characteristic of emotional status of medical universiti students

Examined the state of health, activity and mood before and after classes, before and after the boundary control and influence performance on the emotional state of the second year students of the Faculty of "General Medicine" Medical University. Studies show decrease in health and activity among students with high and good academic performance, and among the weaker students . The largest decrease in HAM found among students with high academic performance , indicating that they expressed excitement about the incorrect subjective assessment of their capabilities . The increase in stress conditions.

The emotional state is a psychosomatic unity of physiological, biochemical, behavioral changes, subjective psychological experiences, changes in speech, its tone, tempo, etc., aimed on the motivation and regulation of activity.

Emotions and feelings - is the experience of man's relationship to what he does or learns, to others, to himself, related with satisfaction or dissatisfaction of its needs.

Mood - an emotional state, coloring all human behavior. It is not directly related to a specific situation, is not caused by a single event, and the global state, ie, mood is not substantively and personally belongs to a particular subject, reflecting its particular impact on the perception of the situation himself, other people. Emotional states can improve or worsen human activity.

H - health reflects the strength, health and the degree of fatigue.

A - activity - the mobility, speed and tempo shifting neural processes.

As is well known, studying at the Medical University is very difficult, stressful, requires a lot of effort and mobilization of the body.

The emotional state of students: health, activity and mood may affect their academic performance and vice versa. Very long-running and complex in structure workshops, a large number of boundary control and exams - the main reason that causes emotional stress for students of medical universities. Most students feel the excitement that prevents the successful completion of the tests and examinations [4], because of usual for such a state fear blocks the intelligence, paralyzing the will , impairs memory and reduces the ability to concentrate. Practical classes and passing exams are accompanied by intense mental activity, a significant limitation of physical activity, change, and often disorganizing of sleep time, severe emotional distress associated with possible changes in the social status of the student, with the public evaluation of others - all of which can lead to overstress in regulation mechanisms of physiological systems.

Of course, it is necessary to take into account the complex social and psycho-physiological process called adaptation, accompanied by considerable stress compensatory and adaptive mechanisms of the body [8].

Based on the above, we set a goal: To investigate the state of health, activity and mood of the students before and after school, before and after the boundary control and influence performance on the emotional state of students.

Materials and Methods: We used a questionnaire HAM. (H - health, A - Active, M - the mood). During the study, the subjects were asked to relate their condition with a number of features for multi- point scale. This scale consists with indexes (3210123), disposed between 30 pairs of words with the opposite value reflecting meaning of health, activity and mood. The subject must select and mark a figure that most accurately reflects its condition at the time of the survey. Second year students were surveyed faculty "General Medicine" Medical University. The survey involved 184 students. These students we have divided into three groups according with their educational progress. Group I (percentage score performance - 85100 %) - with a high, II (70-85 %) - with average, III (0-70 %) - with a weak knowledge.

On the day of boundary control students were presurveyed about the expected mark, and possible reasons are not enough good preparation for the upcoming inspection.

Students of all three groups were basically healthy. Therefore, observed after a 4-hour practice session at the class of "normal physiology" drop-being and activity shows mainly of fatigue, reduced mobility and the speed of nerve processes (Fig. 1,2,3).

It is notable that trainees II and III are characterized by lower activity both before and after the training compared with that index in the I group. At the same time, two other indicators HAM appear equally in all three groups of respondents with a slight predominance of mood level in group 1.

Landmark control (LC) leads to an even more hard reduction in HAM (Fig. 4) as well as developing a more severe fatigue, reduced activity of nerve processes, especially pronounced in the I group of students.

It is interesting that the largest decline in the HAM is observed among students with high academic performance . Moreover, in this group of pre- poll on the expected assessment indicates the presence of a large number of students, subjectively underestimates its capabilities.

It should be noted that studying the cause of constant tension, the severity of which increases during the passing of boundary control , consider the long-term studies, loaded schedule, lack of time to prepare. The increase in stress conditions (SC) is a mobilizing factor increasing the reserves of the body.

The smaller the difference between the indices HAM before and after exercise (training, mid-term control), the lower the intensity of the stress conditions (SV). The increase in HAM indicators increases the tension. According to Simonov `s information theory, emotions arise only if the organism stand in front of any problem, and possibilities to solve it is not enough. The funds to achieve the goal of our research is the information, skills , experience, energy and time, the lack of which more often observed among students of II and III groups.

1 ) Characterization of the state of HAM at the starting of class: in groups with medium and low achievers revealed lower levels of HAM performance, especially the power, the mobility of nervous processes in comparison with the I group decreased by 6.5 %;

2) After the class and after the boundary control indicators of health and activity decreased in all three groups; 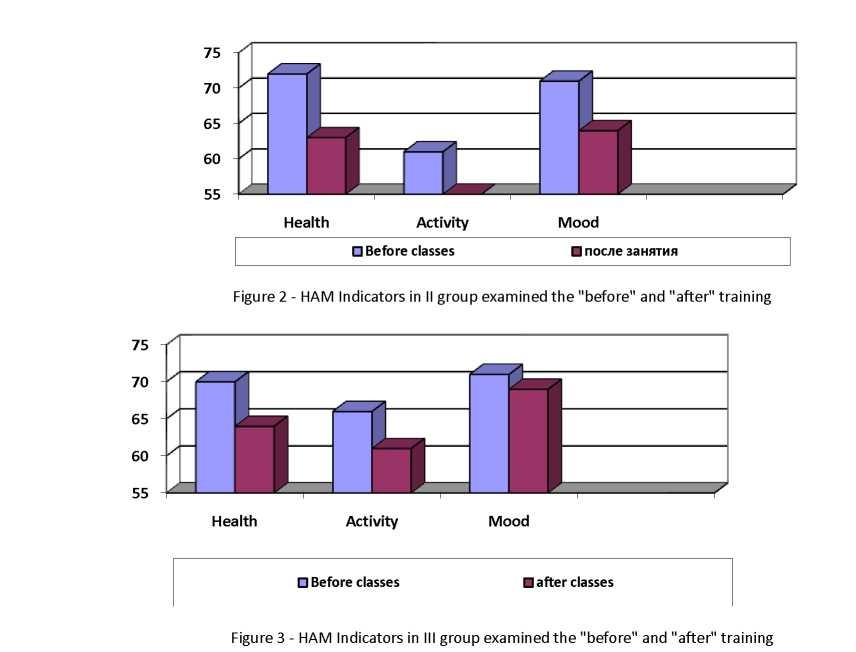