Considered the problems and the specific features of the development of corporate information systems using Java technology. Proposes to develop methods and unique architecture, which have been applied in practice.

The developed information system allows hospitals and insurance companies to manage claim submission and claim processing functionalities. These types of systems make the business more efficient. The new Java-based information system was implemented to improve the information processing approaches. The project modernized the claims processing environment by enabling web-based product services and enabling new technologies. Many modern computer applications have features that are web-based and delivered tothe end users over an Internet. Real-time web-based access to health insurance software applications becomes a critical part of many medical systems. Intensive technological change in hardware and networking software [7] provides more choices than in the past [8]. The development of computer- assisted health insurance claim processing systems is of increasing importance for the whole area of medicine and its numerous applications [6].

Transformation Process component encompasses the receipt of transmission of real-time transaction from boundary systems by self-detection of a new real-time medical insurance claim and then performs verification to transform the claim into a common internal format of the organization.

Core Application component is tasked with identifying claim metadata and then validating the claim to ensure presence of accurate claim information. Also, this application stores claim information into a database. Based on the results of the validation process, a claim may be —Rejected”, —Released”, or —Suspended”.

The Message Driven Beans (MDB) reads the XML message asynchronously from the queue and parses the message [6]. The XML claim document is passed to Core Application input queue [5]. It then flows through the Core Application component, where business rules and validations are applied. All these interactions happen via message queues, between the various components [5].

The claim XML Schema Definition (XSD) is a schema definition for the Claim Object Model, which acts as a base for the WTX to construct the claim XML file and put into the queue in compressed format [4]. The integration component receives claim information in XML format from the queue. XML is transformed to a Java Object based on the claim XSD by using Apache XMLBeans [6].

Graphical User Interface (GUI) provides claim displaying and claim correcting features. Claim operators can search for different types of claims and access various details of the selected claim. The information presented by the web interface is geared towards displaying claim-related information from the Database.

The following is a brief description of a scenario where a user/operator can access the search functionality and search for claims. Access by user:

An Operator clicks on Document Control Number of a particular —Claim” to fetch the respective Claim Details. The application then calls the ClaimDao via ClaimLookupService to obtain all the details of the selected claim as a Claim Object. The information returned via the Claim Object is then used to render the various applicable fields on the screen.

The auditing component provides the capability for an auditing function that tracks the processing of incoming medical insurance claims [6][7]. During the development, we have suggested ways for capture of auditing data at several points in the system. The functional component uses the data gathered to generate a report from the Reporting Database.

The audit component does not persist data to Database directly. The data is persisted to Database during the normal flow of the claim. The data is updated to the claim object as part of the audit component. The entries stored in this table include a text field that labels a particular point in the process flow. Each entry also stores a beginning or/and ending timestamp that captures the exact time that the claim passed through the point.

The table used to store these entries is also used to track other points in the process flow that are being tracked for system performance monitoring.

The database contains the membership information. The information system makes the call to the database using Group Number and Subscriber Number, and finds a match. This part is intended to give a description of the Group and Membership Information. This is used in the process of lookup, validation and edit of the claim data during the claim processing and is invoked from the component called Core Application.

In the process of validating Claim the Core Application can make 4 call types.

To get Group Number with subscriber number as input, it will invoke invokeGroupBySubscriberId() method of the ServiceInvoker interface.

The Unified Modeling Language (UML) was used for specifying requirements from the technical perspective. UML use cases were developed to describe the major functionality of the proposed system, including components such as: claim processing, claim display, and claim correction. The information system was implemented with a relational database. UML was heavily used in the development of class diagrams. The use of Object Oriented (OO) principles and mechanisms, such as encapsulation and inheritance, was made. UML sequence diagrams were also used to create a technical design. 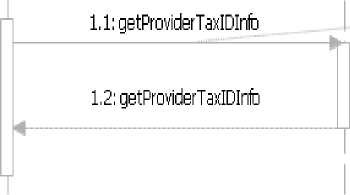 1. Core application makes a call to the invokeProviderTaxIDLookupService method of the ServiceInvoker, which internally calls the implementation class ServiceInvokerImpl.

This method takes the ProviderTax!dLookuprequest as

Input and returns ProviderTax!dLookupResponse as output

Following framework configuration files were updated with the entries as shown below: applicationContext-service-default.xml