It is known that Zinc which is contains in pancreatic β-cells of take participation in formation of deposited storage form of insulin in cells. It is known now a 18 Diabetogenic zinc binding β-cytotoxic chemicals (DZC) which in β-cells formed toxic chelat complexes that result destruction and death of β-cells within 15-30 min. and developing of diabetes. Among 18 DZC 17 of them are belong to derivatives of 8-oxyquinolin which are a components of more than 10 pharmaceutical drugs. It is known also that administration of amino acid a Reduced form of Glutathione completely protect pancreatic B-cells of destruction and prevent developing of diabetes caused by DZC. It is supposed that this property of Glutathione is determined by its ability to block of zinc in B-cells and to prevent interaction of it with DZC. Authors using of sensitive and high specific histochemical methods established that only Reduced form of Glutathione contains of SH-radical in structure of molecule blocked zinc ions in β-cells and protect of its from destruction caused by DZC contrary to Oxidized form of Glutathione not contains of SH-radical, not blocking of zinc ions in β-cells and not protect formation of zinc-DZC complexes in β-cells accompanied by death of cells. Authors suppose that in process of formation of toxic complexes as zinc-DZC atom of zinc is fixed between atom of S from SH-radicals of two molecules of Reduced form of Glutathione or between atom of O of a carboxyl group and atom of S of SH- radical of molecule of Glutathione as in result of interaction of zinc with diabetognic derivatives of 8-oxyquinolin.

Pancreatic β-cells accumulate Zn2+ in mature secretory granules where it is provided for processing, storage, and secretion of insulin. Pancreatic islets of many mammals as rabbits, dogs, cats, pigs, mice, horses, hamsters and of human contains a large amount of ions of zinc [1-3]. In β-cells Zn+2-ions take part in processes of biosynthesis of insulin as in processes of storage by forming of Zn+2-insulin complex accumulated in granules of β-cells [4, 5]. It is known that Zn+2-ions in β-cells formed with insulin a deposited form of hormone as Zn+2-insulin complex [5]. Proinsulin forms a zinc contain hexamer soon after its synthesis. Among about 20 known diabetogenic chemicals [1-3; 6-9] capable induce selectively destroying β-cells, 17 belong to Zn2+-binding derivatives of 8-hydroxyquinolin (DZS). DZS formed in β-cells of chelat complexes with zinc that result destruction of β-cells within 15-30 min and finally developing of insulin-deficient diabetes in animals [8]. It was confirmed that any causes prevented interaction of zinc in β-cells with DCC protect β-cells from destruction and death [1, 2, 7, 8].

Aim of work: to investigate interaction of zinc in pancreatic β-cells with both forms of Gluthation.

For to induce experimental diabetes two DZS were used. Diphenylthiocarbazon (DZ) and 8-para- (toluenesulfonilamino)quinoline (8TSH) possess a few important properties for this purpose: 1) to form with zinc in β-cells chelat complexes highly specific for zinc; 2) complexes with 8TSH have bright green fluorescence [12-14] that allows to observe visually of zinc in β-cells and estimate content by measuring of intensity of fluorescence by using of fluorescent microscopy; 3) complexes of zinc with Dithizon revealed in cells as bright red granules using of dark microscopy. As these complexes at the same time are toxic for β-cells both substances possess diabetogenic properties and result destruction and death of the majority of the β-cells that accompanied by development of a diabetes mellitus 1 type within the first 2-3 days. High specificity of Dithizon for identification of zinc confirmed by results of comparative spectral analysis of spectrum of absorbance of complex Zn+2-Dithizon extracted from β-cells with the similar artificial complex formed in vitro. The maximum of absorption of both ranges was identical and made 530 nanometers [7].

Preparing of Dithizon solution: 30 ml of distilled water added 0.6 ml of 25 % of solution of ammonia, 400 mg of Dithizon. Mixing on a water bath (+70 °C) for 10 min, filtration. Obtained filtrate contains 1 % water-ammonia liquor of Dithizon solution was injected intravenously to rabbits into an ear vein. Preparing of solution 8TSH for injections: 25 mg powder 8TSH (Znstitute of High Pure Reagents, Моscow, Russia) dissolved in 70 % ethanol at a temperature +70 °C within 10 min on a water bath then injected intravenously of 38-42 mg/kg. 8TSH formed fluorescent complexes with zinc and cadmium. The complex Zn+2-8TSH in ultraviolet light at of 360-370 nanometers fluoresces bright green light (Fig. 1.2), and the Cd-8TSH complex — bright yellow. Cadmium is absent in pancreatic β-cells. That is why 8TSH for β-cells is high specific for staining of zinc ions [12]. Method is sensitive for revealing of minimal zinc concentration as 10-7-10-8. The reagent was offered by fnstitute of High Pure Reagents (Moscow) as high specific method for revealing of zinc-ions in tissues of animals, including pancreas tissue [13, 14].

Frozen sections 4-5 mcm of pancreas of animals were investigated using dark-field microscopy after intravenous administration of Dithizon and of luminescent microscopy for histochemical luminescent identification of zinc in β-cells after staining of sections of pancreas tissue or after intravenous injection of 8TSH. 0,4 % acetone solution 0,4 % of 8TSH was used: several drops of which applied on sections for 10-12 sec.; washing of sections later by distilled water.

Obtained results demonstrate that a large amount of Zn+2-ions concentrated in pancreatic β-cells of intact rabbits (Fig. 1.1, 1.2; Table). īп sections of pancreas of animals from group 1 show positive Dithizon reaction for zinc in the form of red granules of Zn+2-Dithizon complex (Fig. 1.3) filling cytoplasm of β-cells. Similar results obtained using of 8TSH reaction: a large amount of zinc in β-cells of intact animals — the intensive bright green luminescence of a complex Zn+2-8TSH (Fig. 1.2) in compared with expressed negative reaction in β-cells of animals of groups 1 and 2 after administration of DZ as after GRF+DZ (Fig. 1.4; 1.6) was observed. 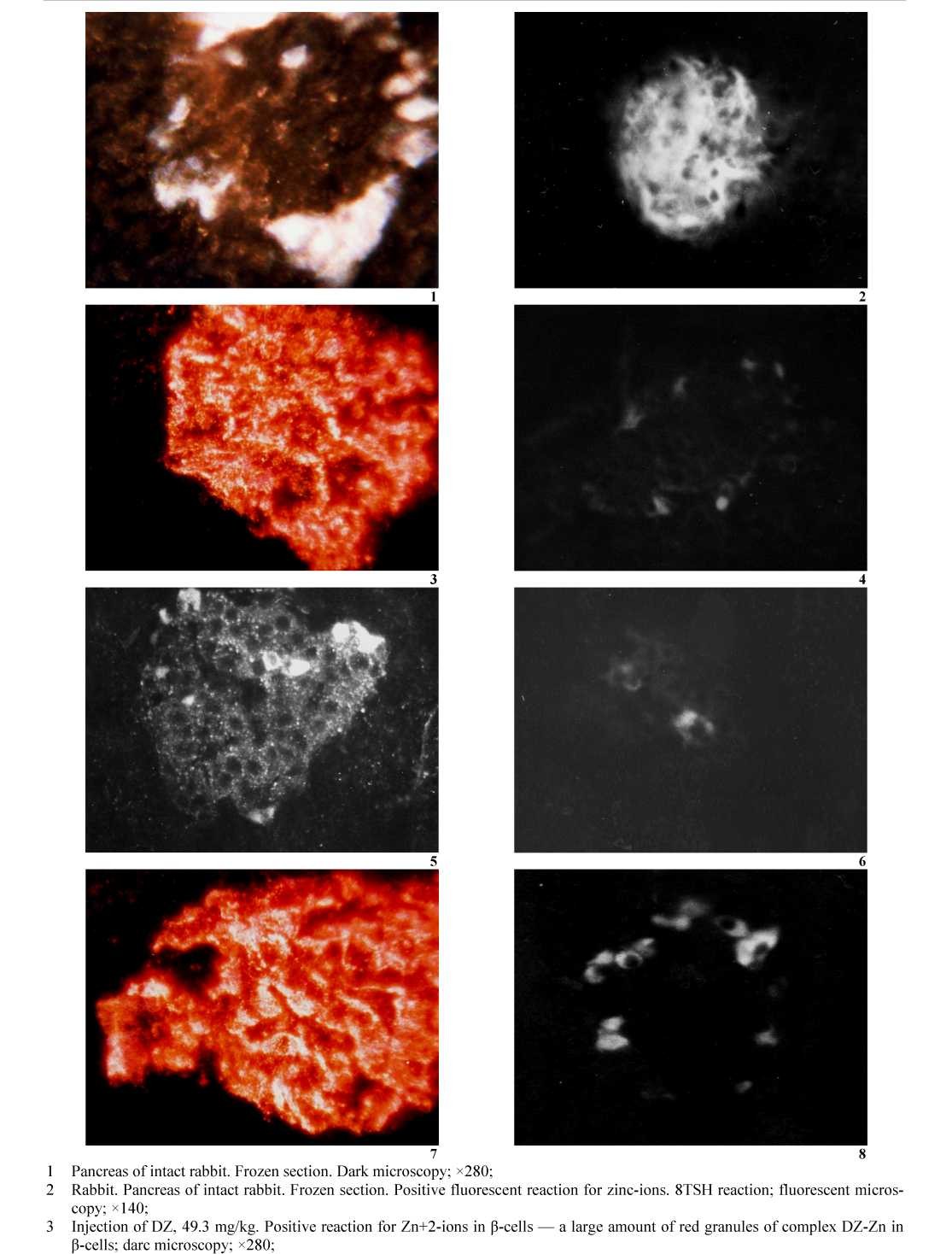 Figure 1. Interaction of DZ and GSH with zinc ions in pancreatic β-cells

Diabetogenic derivatives of 8-oxyquinolin contains in the 8 position of quinolin ring active OH- radical or other radicals contains atoms of S, N or O. Six isomers of 8-oxyqunolines not contains in this position of such radicals or atoms or if these radicals were extracted from a molecule — were not capable to form complex salts with zinc and not possess completely diabetogenic properties [6, 17].

It is necessary to return the active radicals in position 8 for to restore diabetogenic activity of substance [6, 17]. Formation of the chelat-complex by atoms of O and N result formation of pentagon or hexagon rings [6].

It is known that in process of formation of the Zn+2-complex with diabetogenic derivatives of 8-oxyquinolin and Dithizon atom of zinc is fixed between S or O atoms in position 8, and N or O atoms — in positions 1 or 2 (Fig. 2). Padding durability to the Zn-DZ complex is determined by fixation Zn atom between not one, but two atoms of S and two atoms of N of two molecules of dithizon. In glutathione molecule obviously that atom of Zn has to be fixed between S atom from the SH radical and, most likely, atom of oxygen of a carboxyl group (Fig. 2). It is possible to suppose that formation of complex Zn-GRF by fixation of atom of Zn between atom of S and O of one molecule of GRF, or by fixation of atom of Zn between two atom of S of two molecules of GRF.

Pentagonic rings are evidently more stable. In case if atoms of S participate in formation of chelates and then most stable are quadrangular rings (Fig. 2). Electrons of the lone pair of electrons are displaced from nitrogen donor-atom located in the first position to zinc atom. In experiences with various isomers of 8-oxyquinolin dependence according to which the maximal toxicity possess isomers which are forming chelates of structure 1:1 with metal and have a stability constant logarithm equal 7.6 and above to 9.4 [6]. The complexes of derivatives of 8-oxyquinolin possess high toxicity for β-cells formed with zinc have a high rate of logarithm of a constant of stability, equal 8.5. Weitzel G. and coll. [18] confirmed that the complex of structure 1:1 contains 1 molecule of 8-oxyquinolin and 1 atom of zinc is most toxic for cells.

High durability of the Zn+2-Dithizon complex 2:1 (Fig. 2) determined by space elongation of molecule of Dithizon and disposition of two phenolic rings on the ends of a molecule that does not prevent the atoms of sulfur and nitrogen located in the center of a molecule to approach zinc atom. Besides, atom of zinc is lo-

cated between two atoms of N and S, regarding to which affinity of zinc is very high and exceeds affinity to O. At last, two molecules of Dithizon having totally larger number double connections increases toxicity of the Zn+2-Dithizon complex.

Earlier it was shown that other amino acid Cystein is capable to prevent destruction of β-cells [19] by not diabetogenic binding of zinc in cells as well as Glutathione. In the structure of Cystein SH group is located nearby atom of N from NH2 radical. Meanwhile, it is known that forming complexes of Zn its atom most often is fixed between atom of S, N and O. In molecule of Cystein the radicals containing these atoms are located near.

Meanwhile, it is important to note that number of current pharmaceuticals contains in chemical structure derivatives of 8-hydroxyquinolin is increased. Now more than 10 drugs as Ketotifen, Intestopan, Enteroseptol, Nitroxolin (5NOK), Mexase, Chinosolum, Chlorchinaldolum, Mexaform and Salmeterol are belong to this group. Therefore it is necessary to keep attention to this group of chemicals as one of potentially possible cause of developing of diabetes [20, 21]. 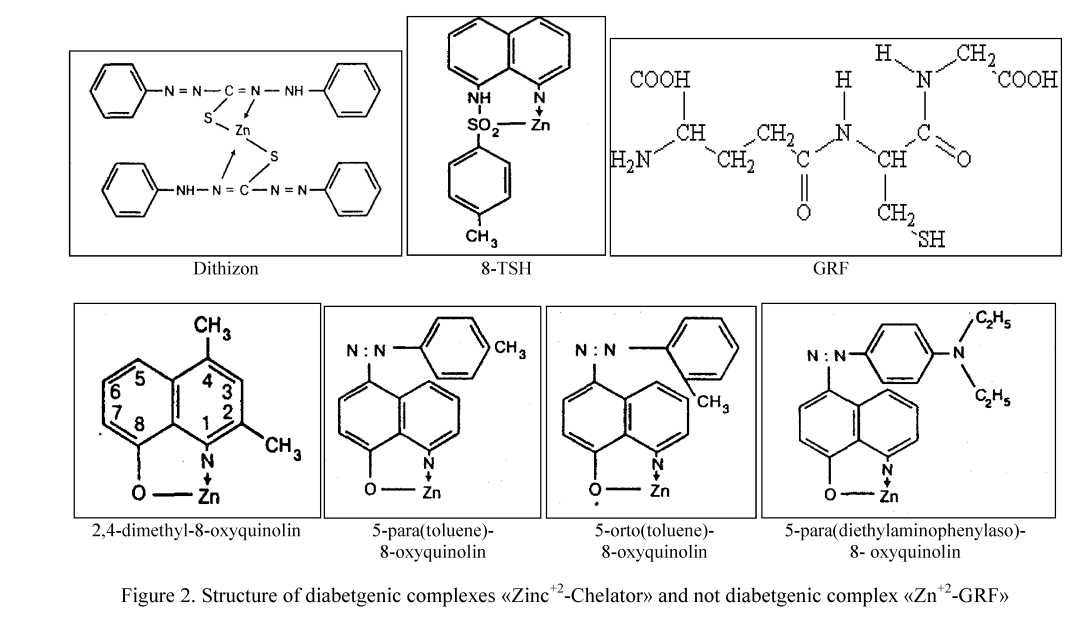