At the article the results of comparative morphological and anatomical analysis of herb Thymus serpyllum L. are given in article for identification of the main distinctive signs of a species. The raw materials of thyme are gathered in Karkaraly Mountains (Karkaraly region) and at the territory of Korneev forest (Bukhar-Zhirau region). Results of researches have allowed defining that the Thymus serpyllum, collected in different areas of the Karaganda region, is presented by two chemo-types. Chemo-types of Thymus serpyllum have external similarity, however under the influence of various factors of the environment essential differences are determined by the external characteristic of stalks, leaves, inflorescences, a structure and omission of a cup and a nimbus that allows using them for identification of this species. In the course of conducting researches micro diagnostic signs for a leaf Thymus serpyllum are specified and also new signs for a stalk, a scape, a nimbus and a cup of whole raw materials are revealed. Diagnostic signs of morphological structure are form and size of stalk, leaf, degree of omission of cup. Diagnostic sings of anatomical structure for leaf, stalk, cup and nimbus are degree of omission, structures of trichomes and their composition, also presence of crystals of oxalate of calcium in tube of nimbus, essential oil glandular, nipples of outgrowths of cells of epidermis for a leaf of a cup, a nimbus.

Improvement of techniques of determination of authenticity of raw materials on morphological and anatomical signs, both for whole raw materials, and for the crushed raw materials is provided by modern requirements to quality of medicinal vegetable raw materials. Now as official medicinal species are used Thymus vulgaris and Thymus serpyllum.

Thymus serpyllum meets in a temperate climate of Eurasia, from Scandinavia to the Mediterranean and from the British Isles to Eastern Siberia, in the Karaganda region meets in Ku Mountains, Korneev woods, mountains Kent, Karkaraly Mountains. It grows in a steppe zone, on dry and fresh sandy soils, in the coniferous and deciduous forests, on forest edges and glades, cuttings, meadows, in young landings of the wood, on the southern slopes, rocks, in the pine woods, on slopes of hills in shrubby thickets [2].

The analysis of literary data shows that Thymus serpyllum in the nature, depending on the place of growth, is presented by several chemo types that was the cause for detailed studying of features of a structure of Thymus serpyllum, collected in different areas of the Karaganda region.

The purpose of our work was studying of morphological and anatomic features of Thymus serpyllum collected from two points, for identification of the main distinctive signs.

Sampling was made during the vegetative period of 2016 year in a phase of budding-blossoming. Studying of morphological features of a grass of Thymus serpyllum collected from two points, was carried out on herbarium samples, fresh-gathered plants and the dried-up raw materials, in comparison with the description stated in the article «Thymus serpyllum» of the State Pharmacopeia of the Republic of Kazakhstan [3].

Studying of micro-diagnostic signs of raw materials was carried out on the temporary micro medicines prepared by the technique included in SP of RK with the subsequent micro photographing. Fresh-gathered bodies fixed in mix alcohol 70 %: glycerin: the water distilled in the ratio 1:1:1 (Straus-Fleming solution).During determining anatomic features of a sheet plate of the studied speices selected the intact most developed leaves in a middle part of stalks; analyzed fragments (surface preparations and cross-cuts) in a middle part — between the main vein and edge. For flowers studied surface medicine of a nimbus, cross medicine of a pedicel. Cross cuts of year stalks did on all its length, through each 2–3 cm.

The anatomic research of plants is conducted according to methodical instructions of M.N. Prozina [4], A.A. Dolgova and E.Ya. Ladygina [5], V.N. Vekhov and L.I. Lotova [6]. Production of temporary preparations (surface and crushed preparations, cross cuts) was made by the standard techniques [7–9] with use of the freezing microtome «Tekhnon MZP-01». Clarification of micro preparations was carried out by means of glycerin. For receiving surface medicines leaves boiled in 10 % potassium hydroxide solution.

Morphologically Thymus serpyllum is presented by herbs or semi-low shrubs with the lying or ascending lignified stalks and the upright or rising grassy floriferous branches.

It is an integral or partially crushed thin stalks, leaves and flowers. Stalks are tetrahedral, thin (up to 0.5 cm), greenish or yellowy-brown color, sometimes with a violet shade. Leaves are the short scape, lancet, elliptic or longitude — elliptic, reaching length about 15 mm, low omission or naked with sharply being veins on the lower side of a leaf. On all surface of a leaf numerous yellowish-brown points (essential oil glandular) are visible; at the basis of leaves long bristle hairs are often visible.

Flowers are small, single or collected on some pieces in semi-verticils. Each flower consists of a two-lip cup and a two-lip nimbus. A cup about 4 mm long, a nimbus 5–8 mm long, stamens — 4, a pestle with a four-separate top ovary.

Color of leaves is green or gray-green; cups are henna-red; a nimbus are bluish-violet. The smell is fragrant, taste of water extraction bitter and spicy. Data on the comparative analysis of morphological features of Thymus serpyllum are presented in Table. 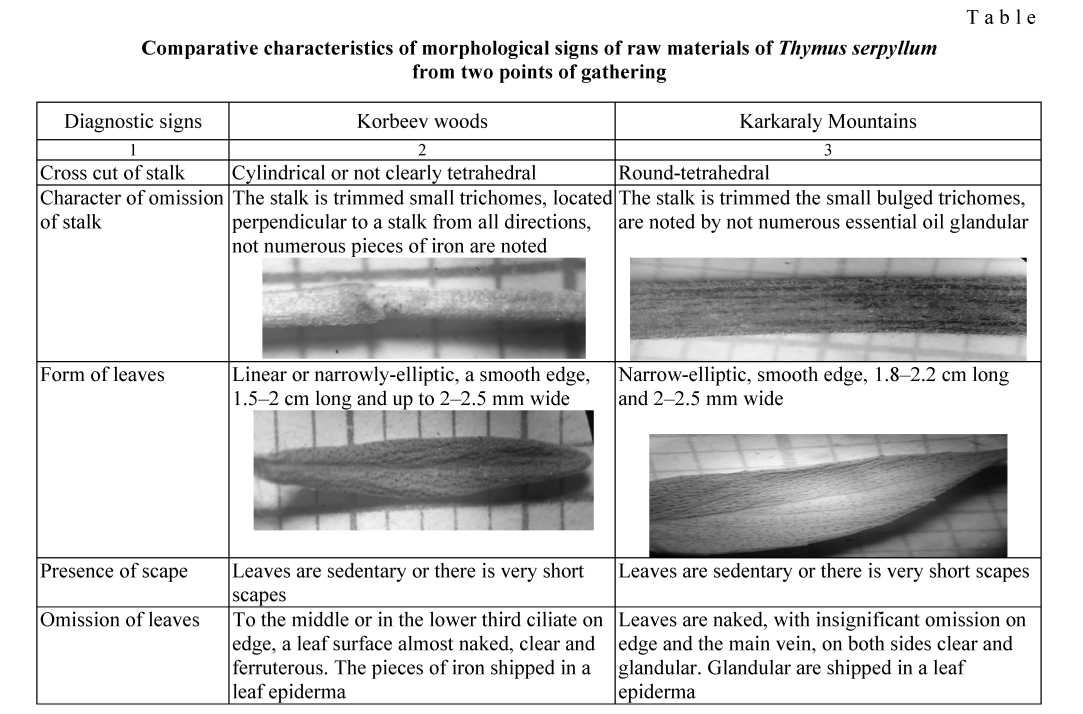 The analysis of descriptions of the raw materials collected in the Korneev woods and in Karkaraly Mountains shows similarity in a structure of vegetative and generative bodies though some differences which are connected with ecological conditions of growth are noted.

So, for raw materials of Thymus serpyllum, collected in the Korneev woods, the cross section of a stalk almost cylindrical or not clearly tetrahedral; for the raw materials collected in Karkaraly Mountains, clear rounded tetrahedral. For both points of collecting it is noted that the stalk is trimmed small trichomes which are located perpendicular to a stalk axis.

Flowers are small; collected in semi-verticils on several pieces forming a heady inflorescence in the lower part of an inflorescence verticils settle down, there can be single flowers less often. On a pedicel the white painted trichomes forming not dense omission are noted. For raw materials from the first point of collecting a cup is narrow-jingle, lilac, densely trimmed, 4–4.5 mm long. Three teeth of an upper lip of a cup are small (average larger), acute-angled, unbent. For raw materials from the second point the cup is jingle, rarer narrow jingle, lilac or lilac-violet; 3-gear with teeth of almost identical size, triangular shape and slightly unbent teeth. In both places of collecting the cup is densely trimmed trichomes on ribs and edges of teeth. Color of a nimbus pink-violet, bright pink, is more rare white — for raw materials from Korneev woods, pinkviolet — for raw materials from Karkaraly Mountains.

Thus, the obtained data demonstrate that in the territory of the Karaganda region two chemo types of Thymus serpyllum are revealed.

Diagnostic signs of raw materials of Thymus serpyllum it is possible to consider the following: — for a stalk — a form of a cross cut of stalks, type of omission; — for a leaf — the general form of a sheet plate, 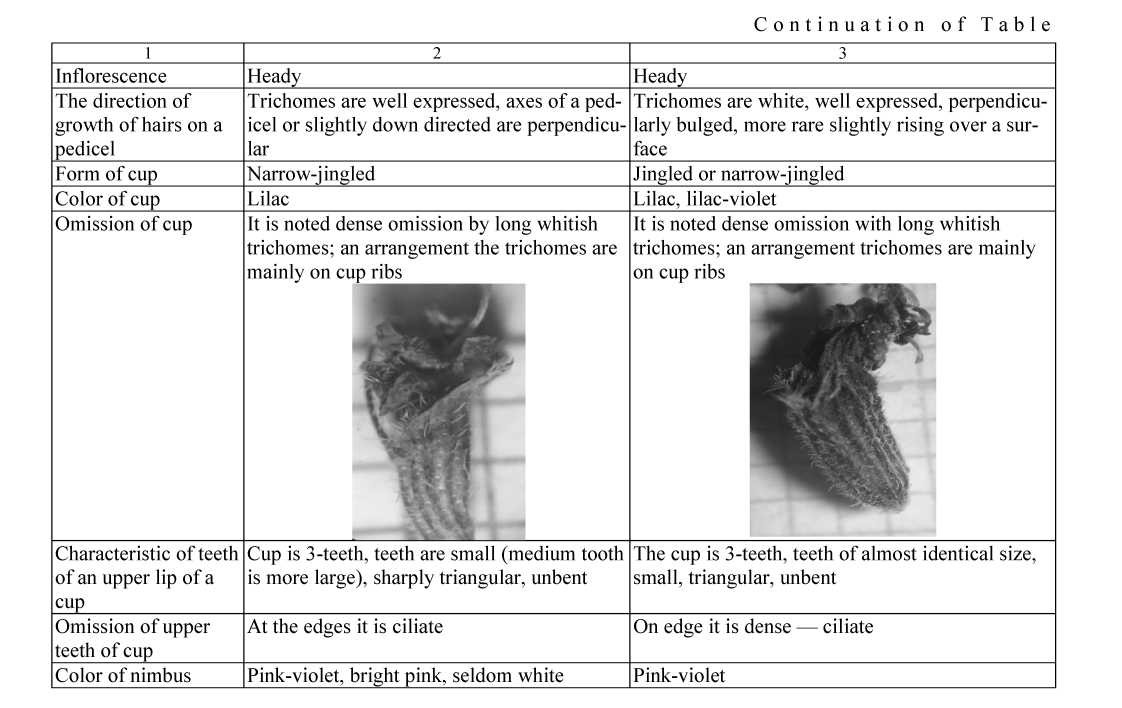 ciliate edge, existence of a large number, slightly shipped in an epidermis of a leaf, essential oil glandular; — for a cup — a form and color of a cup, a structure of teeth, extent of omission, placement by trichomes.

Similar comparative researches are conducted at the microscopic level.

On the top epidermis and the folds of a cuticle and a necklace-shaped thickening of cellular walls is sometimes noticeable by the sheet edge; cells of the top and lower epidermis with twisting sidewalls (Fig. 1).

Stomata are available on both parties of a leaf, on their lower party much more; stomata are followed by two near stomata cells which adjacent cells are located perpendicular to stomata crack (diacytes type). Essential oil glandular are large, consist of 8 secret cells located radially; cells of epidermis around the place of attachment of essential oil glandular often form the socket.

Hairs are several types: very large, multi cellular, warty, located at the leaf basis («bristle hairs»); above on the sheet edge meet smaller simple two — three-cellular hairs a warty surface; heady hairs very small with a mono-celled oval head on a mono-celled short leg, meet on all surface of a leaf; nipple outgrowths of epidermis, smooth or slightly warty, meet on the top party and on the sheet edge (Fig. 2) more often.

Cells of epidermis of a stalk are rectangular, extended, with straight lines or with the slanted ends, with a necklace-shaped thickening of cellular walls; stomata are diacytes type, are located generally on edges. Epidermis is trimmed simple, curved-knee two-, five-cellular hairs with a warty cuticle, heady hairs are on a mono-celled short leg with a mono-celled oval head, nipple outgrowths of epidermis meet a smooth cuticle or slightly warty less often; the essential oil glandular includes 8 secret cells located radially (Fig. 3).

Epidermis of nimbus tube is direct wall, with longitudinal folds of a cuticle with straight lines or with the slanted ends (Fig. 4). In a pharynx and bending of a nimbus epidermis cells are sinuous walls, with nipples outgrowths, is trimmed various hairs: simple than two — four — is more rare five-cellular with a warty cuticle and head hairs of two types: on a mono celled short leg with a mono celled oval head, on a two- cellular leg with a mono celled oval head. On epidermis of leaflets of a cup and a nimbus the large essential oil glandular, sometimes with yellow-brown contents consisting of radial located 8 secretor cells meet; in places of attachment the essential oil glandular of a cell of epidermis form the socket. 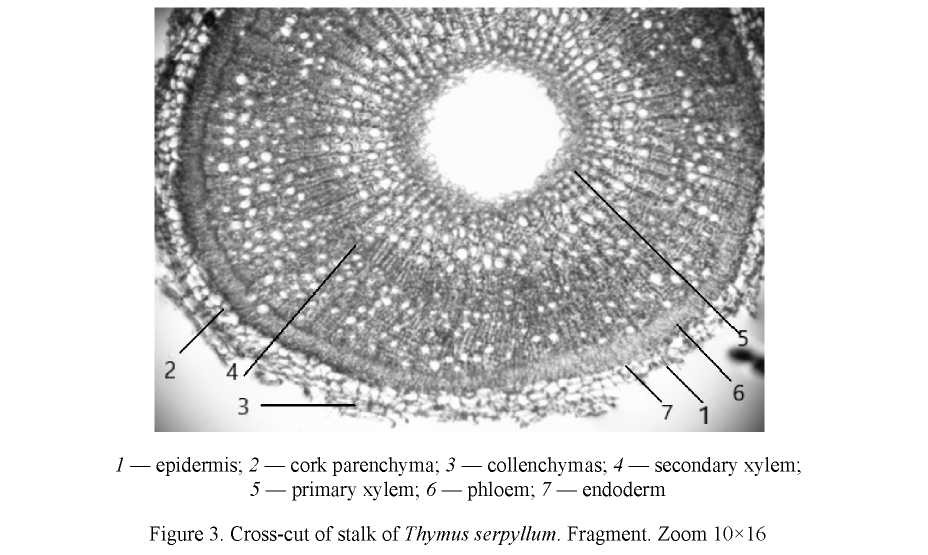 The conducted morphological and micro diagnostic analysis of Thymus serpyllum has revealed the general and distinctive diagnostic signs. The morphological features important for diagnostics of raw materials of thymes are:

Diagnostic signs of anatomical structure for a leaf, a stalk, a cup and a nimbus are degree of omission, character of trichomes and their combination and also existence of crystals of oxalate of calcium in a nimbus tube, essential oil glandular, nipples of outgrowths of cells of epidermis for a leaf of a cup, a nimbus.

Our investigations have shown that the studied chemo types of Thymus serpyllum, collected in different areas of the Karaganda region, are characterized by xero-mesophytes and xerophytes type of a structure that is expressed in a small cellular structure of epidermis of a leaf, existence of numerous essential oil glandular and cuticles. The received results of a morphological and microscopic structure allow including these signs for identification of specific accessory of Thymus serpyllum.