Specification of odonatafauna species diversity in some areas of Karaganda region

The article provides information on the species composition of dragonflies in some areas of Karaganda region. Specified period, number and place of collection of odonatofauna areas are study. In order to identify the species composition according to literary sources, the author pays special attention to the peculiarities of the morphology of the Odonata. An updated faunal list of species of dragonflies submitted of the vicinities of Karaganda region. Dominant and concomitant types of dragonflies are determined. It is revealed that the background form a family of Libellulidae. In general, to the conditions of the Karaganda region the most common representatives of the family of Libellulidae, in our collections this family is represented by four genera and seven species. Dominant on the number of occurrence of the species in the city of Karaganda of the dragonfly Sympetrum flaveolum, codominant is Lestes barbarus F., rare species is Libellula fulva Mull., and in Shakhtinsk is the dominant species Libellula quadrimaculata L., codominant is Orthetrum cancella- tum L., rare species is Platycnemus pennipes, Pall. and Cordulia aenea L. The characteristic features of biology and ecology of mass species are highlighted and described. The article also discusses the features of seasonal activity of dragonflies, marked daily peaks of activity and mating periods.

A detachment of dragonflies is a unique group of insects. Dragonflies are one of the oldest groups of terrestrial arthropods that are over 300 million years old. But nevertheless, above all, they are distinguished by a high morphological specialization, due to which dragonflies are referred to a special department or infrared class, opposed to all other winged insects. Despite the antiquity, dragonflies possess many features of biological progress, such as universal distribution, species diversity (about 6 thousand species), abundance in aquatic and near-water biocenoses. This group of animals, almost completely occupies an ecological niche of air predators. Alternation of the aquatic and terrestrial phases of development with a relatively large biomass of dragonflies causes their significant contribution to the circulation of matter and energy in biogeocenoses.

Dragonflies have not only important biogeocenotic, but also economic significance. The role of dragonflies in mass extermination of bloodsucking insects, and in some cases pests of agriculture and forestry is widely known.

Dragonflies serve as a model object for a variety of biological research. When working with them, many interesting results were obtained in the field of ecology and animal physiology, ethology, zoogeography and a number of other scientific disciplines.

All these reasons explain the increased interest in dragonflies of many specialists. The section of entomological science associated with the study of dragonflies was called odonatology, formed from the Latin name of the detachment of dragonflies — Odonata, which means «toothed». This name was derived from the presence of sharp tooth-like outgrowths on the jaws. In the field of odontology, more than 700 researchers from different countries are currently working. To improve the coordination of odontological research and increase their effectiveness in 1971, the International Society of Odonatologists — The Societas International is Odonatologica (S.I.O.) was founded with the headquarters of the University of Utrecht in the Netherlands. The Society publishes its journal Odonatologica and regularly holds symposia in various countries around the world. The creation of an international society and its printed organ has sharply increased interest in odonatology. In many countries, the national offices of S.I.O. were established, and they began to publish their periodicals. In 1998, on the initiative of zoologists of the Kabardino-Balkar State University and the Institute of Systematics and Ecology of Animals of the Siberian Branch of the Russian Academy of Sciences, the Russian branch of S.I.O.

The number of publications on dragonflies in the world scientific literature is growing, and only in the abstract section of the journal Odonatologica from 1971 to the present, abstracts of more than 14,000 odonatological works published during this period have been cited.

Despite this flow of information, problems remain that are given insufficient attention. One of these problems is the lack of research on regional odonatofauna.

Materials and methods of research

All fees were spent net. Universal net is a bag of nylon, tulle or gauze, hung on a hoop, which is attached to a stick. The shape of the bag can be rounded, flat or conical. The length of the bag is equal to two diameters of the hoop. The recommended dimensions are 35.7 cm [1, 2], 30 cm [3]. The length of the stick varies depending on the purpose of the net. recommend a stick length of 1.5 m; 1.0 m; 0.5 m; the thickness of the stick is 3-4 cm. The round hoop is made of wire and attached to a stick.

During the collection of dragonflies, a stain was used — a glass jar containing cotton wool, moistened with a mixture of acetic ether and chloroform (1: 1) and pieces of corrugated filter paper to absorb the moisture released by insects.

For special fixation of insects, a solution was used: 1 part of phenol, 1 part of acetic acid, 8 parts of distilled water.

Preparing insects for mounting. In a deep desiccator, washed and calcined river sand was poured onto the bottom. It was laid down with paper litter, and insects of approximately the same size are placed on the litter (after preliminary moistening of the sand to saturation). The dragonflies were pierced in the razpravilku, and then mounted in a collection of dried dragonflies. Each dragonfly was mounted on pins and supplied with two labels. Labels size 18×8 mm, they are signed using the selected computer font. The label No. 1 contains: an indication of the collection point; date of collection; surname of the collector. Label No. 2 contains information on environmental conditions, plant crops and other information. Collection, processing of material and definition were carried out under the guidance of determinants: B.M. Mamaev [4] and G.N. Gornostaeva [5], B.F. Belysheva [6].

Results and its discussion

In the general classification system, dragonflies occupy a certain place.

Order of the Dragonfly (Odonata).

In the Karaganda region, the following families of the Odonata detachment are registered:

Characteristics of the species composition of dragonflies in the study areas

It is revealed that in the natural environment in the adult phase appear at the end of May and fly throughout the summer (some species are also found in September). Some, such as the four-spotted dragonfly (Libellula quadrimaculata L.) are not observed in the middle of July. In the phasic phase, the following representatives are encountered. Odonata: Salmon yellow-spotted (Somatochlora flavomaculata V. d. Lind.), Common dragonfly (Sympetrum vulgatum L.), Yellow dragonfly (Sympetrum flaveolum), Latticed dragonfly (Orthetrum cancellatum L.). Representatives of families Sem. Lestas (Lestidae), Arrows (Coenagrionidae), Aomediae (Aeschnidae), Babki (Corduliidae), Dragonflies present (Libellulidae) [7, 8].

In the vicinity of the town of Shakhtinsk, the dragonfly species were found in parks, gardens, which we associate with a lesser concern factor, besides some species such as the Symptrum vulgatum, the yellow dragonfly Sympetrum flaveolum, the four-spotted dragonfly (Libellula quadrimaculata L.) during the summer, travel long distances and fly far away from water bodies. Dragonflies are predators and during studies it was noted that they hunt mosquitoes, in some cases the largest dragonflies hunted individuals from other families, mostly belonging to the suborder of the Aevewing. Mating in most species of dragonflies is observed in mid-July, and egg laying occurs mainly in late July – early August.

In general, the representatives of the family Dragonfly are the most common species of the Karaganda region (Libellulidae), in our collections this species is represented by 4 genera and 7 species (Fig. 1).

The dominant species in the city of Karaganda is the yellow dragonfly (Sympetrum flaveolum), codon foreign (Lestes barbarus F.), rarely there is a red dragonfly (Libellula fulva Mull.) (Fig. 2). 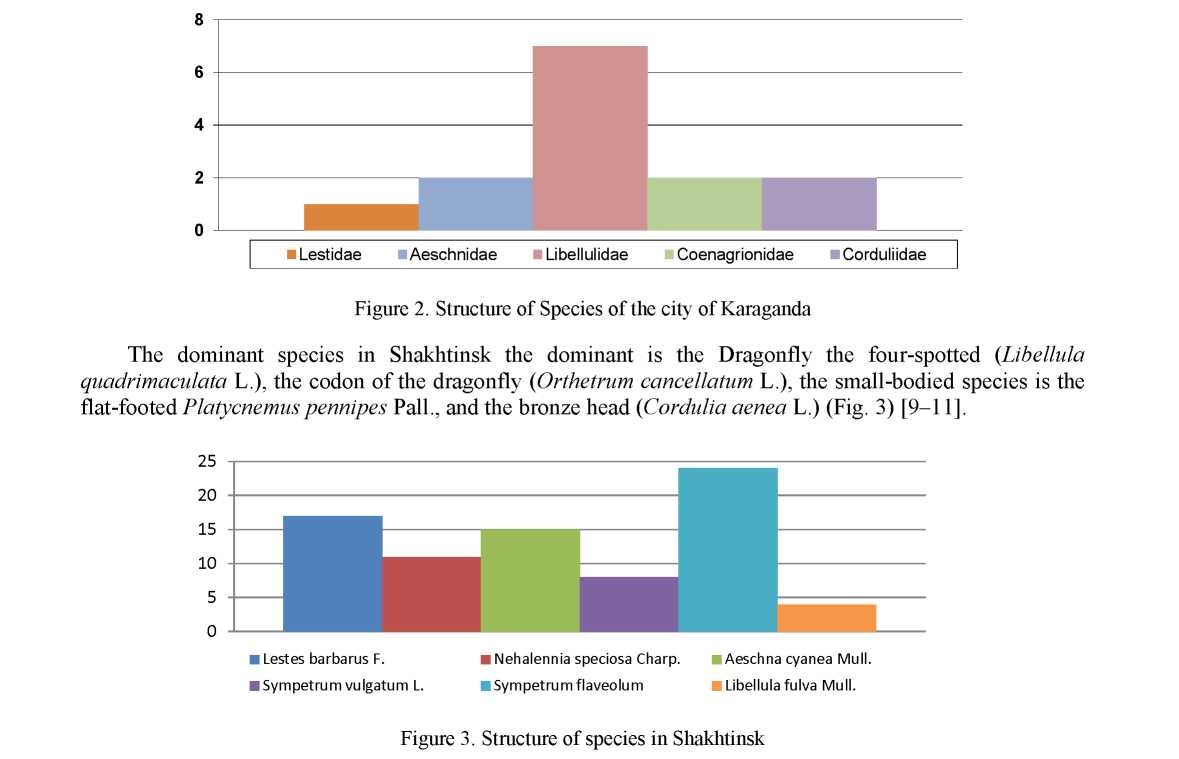 Based on the results of the work done, the following conclusions can be drawn: