The effect of macrolides on the growth of macrophytes

The present research is highly relevant and considers the problem of the ecotoxicity of pharmaceuticals that are persistent in the environment. Until recently, pharmaceuticals have never been studied as chemical pollutants in Kazakhstan. Pharmaceuticals can have toxic effect to the environmental organisms even in low concentration. Their concentrations were determined in surface waters around the Earth. It is important to conduct the study of the toxicity of antibiotics to the aquatic organisms. The following study demonstrates the results ecotoxicological experiment on duckweed Lemna minor. Macrolides as azithromycin and clarithromycin were selected for toxicity test of macrophyte. The test concentrations of substances were set up as 10, 30, 50, 70 and 100 mg/L. The effect of drugs on study species were assessed based on two measurement variables as frond numbers and total frond areas. The results of the research showed that Lemna minor is sensitive to the exposure of macrolides even in low concentration. Total growth inhibition was found in concentration 70 mg/L of azithromycin, while clarithromycin showed 100 % inhibition of duckweed in concentration 50 mg/L.

Nowadays, all people use pharmaceuticals in daily life. Recent studies have focused their research on chemical agents as pharmaceuticals, personal care products, synthetic detergents and insecticides that are used in veterinary medicine. These chemicals are referred as environmental contaminants [1, 2].

There is insufficient knowledge about contamination and effect of pharmaceutical products and their metabolites on the environment. After drugs and their derivatives enter the environment, they can lead to the risk of ecosystem. Currently, the majority of population consume pharmaceuticals with and without prescription. It is believed that the high percentage of many pharmaceuticals excretes from the body and release unmetabolized in the wastewater as biologically active substances. A specific example which proves this statement was published Chemosphere, where Kummerer (2001) showed that 90 % of the propofol that had been used in anesthesia was released unmetabolized. This is a very high percentage, and a lot of various pharmaceuticals enter the wasterwater unmetabolized, and their impact on the environment is still not well- known. There is no doubt pharmaceuticals and synthetic chemicals in personal care products currently released into the environment in very large quantities on a regular basis. Nevertheless, the exact effect that each medication has on ecosystems, biota and humans are still poorly studied. Therefore, it is essential to do further research [3].

There have been published many papers on impacts of pharmaceuticals on marine environment [4–6]. It was found that even low concentrations of drugs have effects on fish, invertebrates, algae and bacteria. For instance, during 28 days, diclofenac could have negative histological impacts on kidney and gills of rainbow trout even at concentration 5 μg∕L [7]. Moreover, acetaminophen, venlafaxaine and gemfibrozil in concentrations 10 g/L had adverse reproductive effect. These pharmaceutical products generate the reproduction and transformed kidney proximal tubule morphology [8]. In Kummerer study, the low concentrations of propranolol and fluoxetine had impact on reproduction in marine species and the nervous system in fish [9].

According to the Statistics Agency of Kazakhstan for the last 10 years, from 2004 to 2014, retail sales of pharmaceutical products increased by 6 times (Fig. 1) [10].

For the first time, Kazakhstan is addressing the issue of the ecology of the pharmaceutical market in the country. The population of Kazakhstan is growing and the demand for the medical substances will rise. It is important to carry on studies on monitoring of pharmaceutical industry.

The present study has focused on toxicity of two antibiotics as clarithromycin and azithromycin to the duckweed Lemna minor. The following compounds were selected using a prioritization study based on the risk of active pharmaceutical compounds to aquatic environments in Kazakhstan [12].

Lemna minor duckweed was selected for the assessment of the toxicity of drugs to their growth. Lemna minor species were collected from Food and Environment Research Agency UK. Totally 360 frond colonies with 720 fronds were used in order to perform the Lemna minor growth inhibition toxicity test. Macrolides for growth inhibition test and standards of acetone, methanol, ethanol, that had been used as solvents were purchased from Sigma-Aldrich UK. Lemna minor species were cultured in Swedish Standard (SIS) growth medium. The compounds for the preparation of SIS medium were supplied with Sigma-Aldrich UK, Fisher Scientific UK and Acros Organics.

Lemna minor growth inhibition test was performed according to the Organisation for Economic Cooperation and Development (OECD) Guideline for the testing of chemicals 221 [13]. The aim of the study was to assess substance-related effects of antibiotics on vegetative growth over seven days based on evaluation of two measurement variables as frond numbers and total frond areas. In order to assess substance related effects, the results of tested samples were compared with controls and the halfway maximal concentration expressed as the EC50. The test concentrations of individual compounds were set up as 10, 30, 50, 70 and 100 mg/L. During the test duckweeds were kept in growth media in the growth chamber with constant temperature 24±2 °C. The test petri dishes were constantly illuminated from top down with a help of light tubes with a light intensity 85-135 μE*m2s-1. Fronds were calculated at the beginning of the test, then on day 3 and day 7. During the test, total frond area was also detected. In order to assess total frond area, digital photographs of the Lemna minor were taken after all petri dishes had been filled with fronds. The area of the colonies in each test sample was detected using the image analysis software Image J. The image scale was set for 10 mm, with 450 pixels. Then, hue color was adjusted to make green fronds more visible and picture was modified to 8-bit type. After that, with usage of threshold operation, Lemna minor fronds were set to red. Finally, total frond area was analysed. Total frond area was calculated on start of experiment, day 3 and at the end of the test (Fig. 2).

Outlines in size was modified to «0,005 mm-infinity» in order to eliminate small impurities in the image. The results of area were presented in mm2 [13].

In general, duckweeds are pervasive in nature. They occur on relatively fresh water as lakes, ponds and quite streams. Lemna minor is the most widespread duckweed species. There are many benefits on selecting duckweeds Lemna minor as the object for the ecotoxicity experiment. They do not need the big laboratory equipment and can be simply recognized without use of microscope. Growth inhibition test on Lemna minor requires minimal time and does not require expensive utensils [14].

The following tested compound was found in the environment. In a study which set out to determine the occurrence of azithromycin in surface water of Germany, Christian et al. found this substance in concentration from few ng/L to 13 ng/L [15]. Previous Brain et al. research showed that even in concentration below 1 mg/L macrolide class of antibiotics causes decline in macrophytes growth [16]. 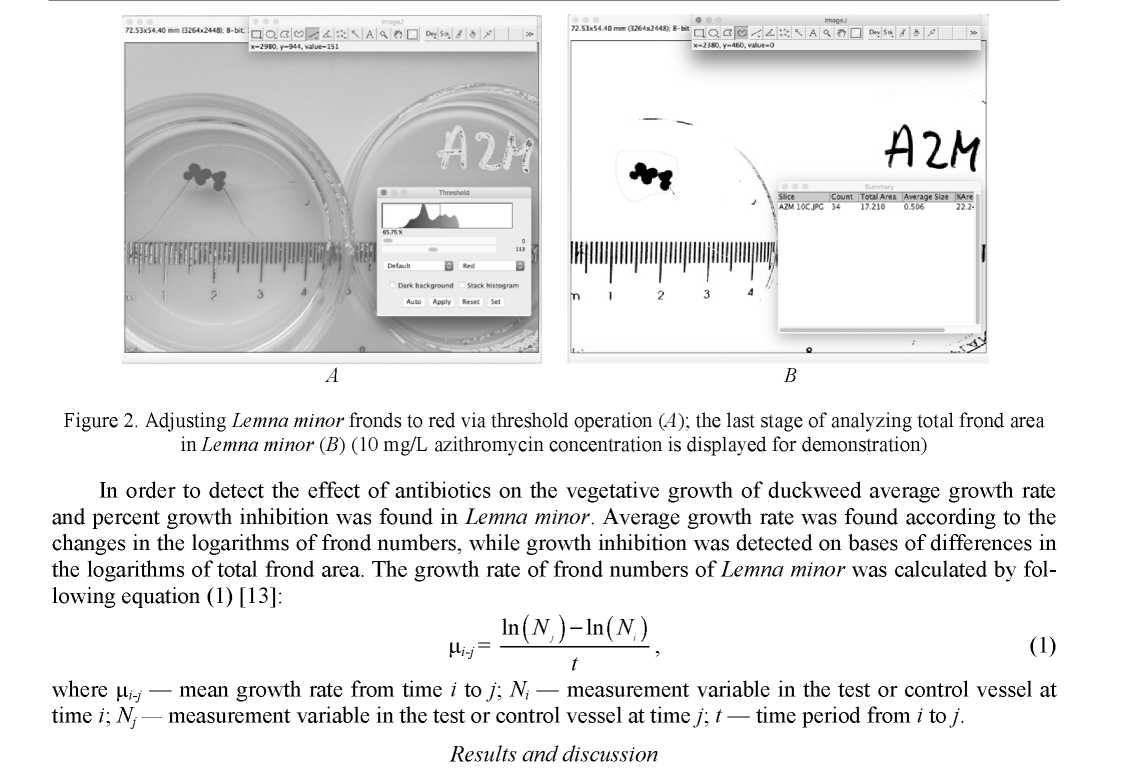 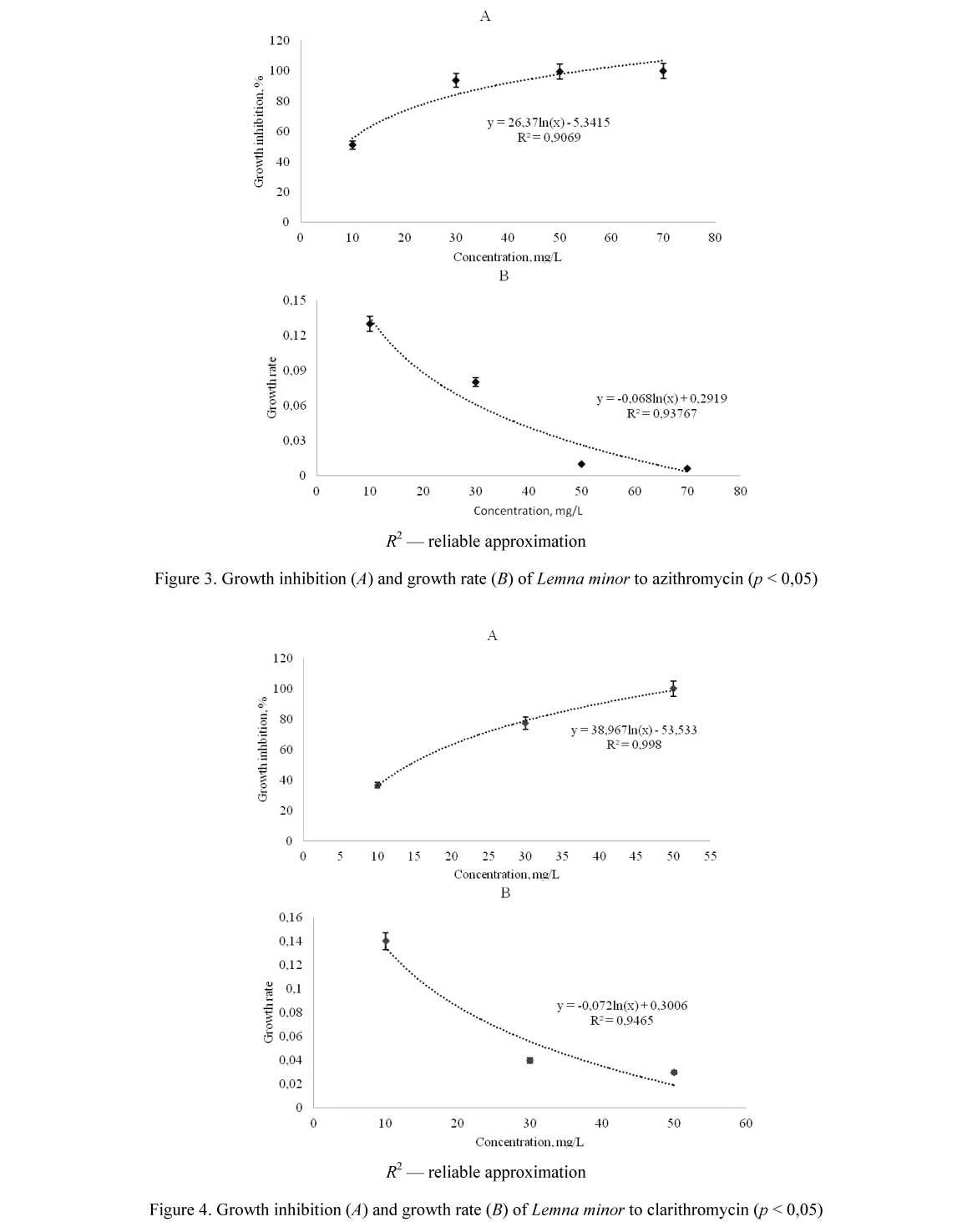 The assessment of control solvents as methanol, acetone and deionised water to Lemna minor was conducted to analyse if solvents have effect to the growth of Lemna species. The results did not show the high toxicity in concentration 1 mg/L, which was used the highest exposure. The growth inhibition of methanol, acetone and deionised water in 1 mg/L was 9,91±0,45 %, 9,56±0,68 % and 6,67±1,78 % respectively. Overall, it was found that duckweeds are sensitive to macrolides.

Currently, in our country drugs pollution do not have a critical situation. Therefore, it is significant to detect and to do more research on potential pharmaceutical contamination problem and take actions to improve and protect ecological and human health, before our environmental condition deteriorate [19].