It is known that reduced form of amino acid the glutathione (GRF), containing in structure of a molecule of SH-radical is capable to prevent developing of diabetes caused by group of diabetogenic zincbinding chemicals whereas the oxidized form of the glutathione (GOF) contrary to GRF only what does not contain in a molecule of SH-group, was completely incapable to prevent developing of diabetum caused by this group of substances. It was shown that treatment of animal GRF is followed by emergence the completely negative reaction to zinc B-cells that it is possible to explain with binding of zinc with GRF what interfered with its interaction with diabetogenic ligands. The model of the isolated pancreatic islets at which the direct influence of substances on B-cells excluding possible interactions of the studied substances in blood and tissues is provided was applied to obtaining more convincing proofs. Results demonstrate that direct influence of GRF on B-cells of the isolated pancreatic islets really leads to binding zinc of B-cells thanks to what its interaction with diabetogenic helator is prevented. At the same time results demonstrate that preventive action of GRF contrary to GOF is caused by existence in structure of its molecule SH-group through which is forming a complex of zinc with GRF that protect destruction of B-cells at subsequent influence of diabetogenic zincbinding chemicals.

It is known that Diphenylthiocarbazone (Dithizon) and some derivatives of 8-oxyquinolin (8-ox) are forming of toxic chelat complexes as «Zn-DZ» and «Zn-8-ox» in cytoplasm of B-cells that result selective destruction of B-cells within 15-30 min. and accompanied by developing of type 1 of diabetes in animals [1]. Later it was reported preventive injection of some amino acids as Cystein and L-Hystidine contains sulfhydril SH-radical in structure of molecule, accompanied by protect B-cells of destruction caused by DZ and 8-ox that result prevention of developing of diabetes in majority of animals [2-5]. High durability of the Zn+2-Dithizon complex 2:1 determined by space elongation of molecule of Dithizon and disposition of two phenolic rings on the ends of a molecule that does not prevent the atoms of sulfur and nitrogen located in the center of a molecule to approach zinc atom. Besides, atom of zinc is located between two atoms of nitrogen and sulfur, regarding to which affinity of zinc is very high and exceeds affinity to oxygen. [5]. It was supposed that protective activity of Cystein and L-Hystidine may be determined by the presence of SH-radical in the structure of molecule because formation of chelat complexes with DZ and 8-ox is processed by connection of Zn atoms with atom of S, H, O or N [6, 7]. It was reported also that injection of Glutathione Reduced form protect B-cells of destruction caused by DZ and 8PTSQ [8, 9]. Meanwhile using of animal model is difficult to obtain confirmation that preventive action of GRF is realized by binding of Zinc in B-cells and not possible to exclude inactivation of DZ as result of possible interaction between GRF and DZ in blood, outside of B-cells. Aim of investigation: to investigate possible direct preventive effect of amino acids GRF and GOF on B-cells excluding possible interaction between chelator and Gluthatione in the blood.

Group 1. Incubation of intact islets with Dithizon result binding of Zinc in B-cells that accompanied by formation of red granules of chelat complex «Zinc-DZ» (Fig. 1.1) in cytoplasm of all number of islets.

Group 3. Preliminary incubation of islets with GRF 95 mg/100 ml (950 mg/l) and followed incubation with Dithizone solution not result binding of Zinc in B-cells by Dithizon determined by binding of Zinc this period on by GRF (Fig. 1.3).

Group 4. Incubation in medium 199+95.6 mg/100 ml (956 mg/l) of GOF for 20 min; positive reaction for Incubation of islets with GOF, a oxidized form of Glutathione not contains in structure of molecule of SH-radical, not result binding of Zinc ions in B-cells that accompanied by intensive positive fluorescent reaction for Zinc ions in B-cells that determined by absence of ability of GOF to form complexes with Zinc in B-cells (Fig. 1.4).

Group 5. Incubation of islets with GOF, an oxidized form of Glutethione not contains in structure of molecule of SH-radical, not result binding of Zinc ions in B-cells that accompanied by followed formation of toxic complexes Zinc-Dithizone after past incubation with Dithizone solution (Fig. 1.5) and not protect B-cell of destruction (Fig. 1.6).

Obtained results showed that direct action of GRF on B-cells of isolated pancreatic islets result binding of almost all amount of Zn-ions in B-cells. Interaction with DZ after GRF not accompanied by forming in B-cells of chelat complexes Zn-DZ that result prevention of destruction and death of majority B-cells. Contrary, direct action of GOF not contains in structure of SH-radicals not protect B-cells of formation of Zn-DZ that accompanied by destruction and death of B-cells.

It is known that in process of formation of the Zn+2-complex with Dithizon and diabetogenic derivatives of 8-oxyquinolin atom of zinc is fixed between S or O atoms in position 8, and N or O atoms — in positions 1 or 2 (Fig. 2) [15]. Diabetogenic derivatives of 8-oxyquinolin have in the 8 position of quinoline ring active OH- radical or other radicals contains atoms of S, N or O (Fig. 2). Isomers of 8-oxyqunolines not contains in

this position such radicals or atoms, or if these radicals extracted from molecule not capable to form complex salts with zinc and not possess completely diabetogenic properties. It is necessary to return the active radicals in position 8 for to restore diabetogenic activity of substance [16]. Formation of the chelat complex by atoms of O and N accompanied by forming of pentagonal or hexagonal rings [6].

Commentaries and conclusions for Figure 1

Obtained results showed that: 1) interaction of GRF with zinc in B-cells result forming of complex zinc-GRF (Fig. 1.2); 2) this complex is more stronger and completely protect interaction of zinc with Dithizon as of destruction oaf B-cells caused by complex zinc-Dithizon; 3) GOF on the contrary, does not interact with zinc and does not prevent its binding by Dithizon that result followed destruction of B-cells (Figs. 1.5, 1.6).

SH group contains sulfur atom. Meanwhile, as described above, it is known that sulfur atom participates in formation of the chelate complexes with Zn as well as N, O and C atoms. It is known that in process of formation of the Zn+2-complex with Dithizon and diabetogenic derivatives of 8-oxyquinolin atom of zinc is fixed between S or O atoms in position 8, and N or O atoms — in positions 1 or 2 (Fig. 2) [6]. High durability of complex zinc-Dithizon determined by fixation of atom of zinc between two atoms of sulfur from two molecules of Dithizon [5] (Fig. 2). It is apparent that atom of zinc can be fixed between atoms sulfur and

Table Intensity reaction for Zinc ions in B-cells of islets treated by DZ, GRF, and GOF [in relative units (ru)]

Analysis structure of molecule of GRF demonstrate obviously that atom of zinc can be fixed between atoms of sulfur and atoms of oxygenium or hydrogenium at process of formation of chelat compex zinc- GRF. 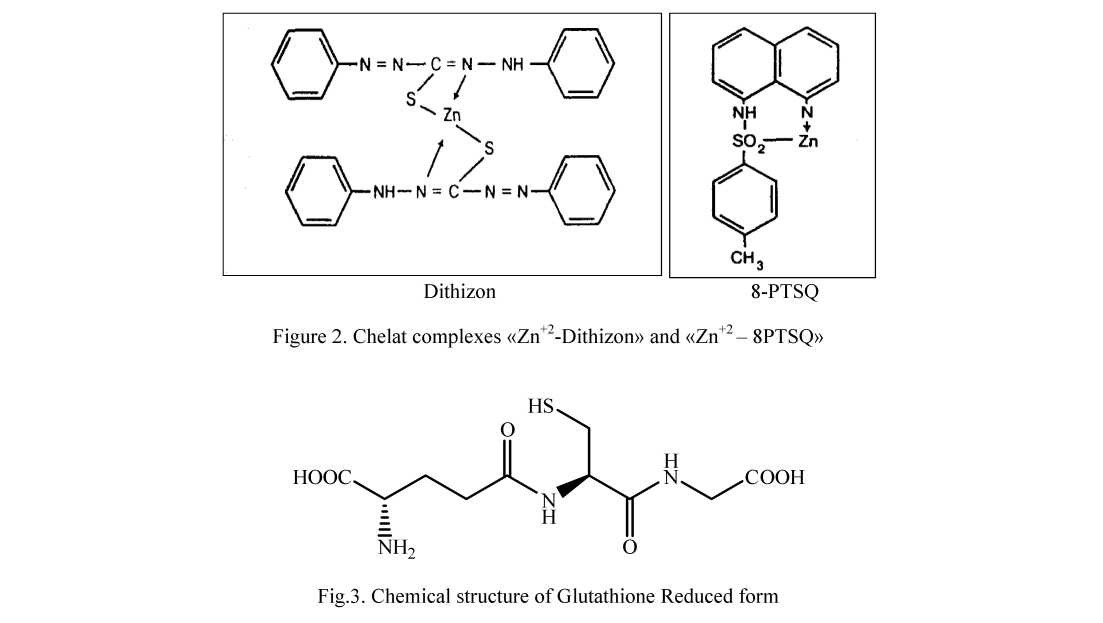 3. Ppreventive effect after direct action of Glutathione Reduced form determined by binding of Zn-ions via atom of sulfur of the SH-group and followed disposition of zinc atom between atom of sulfur and atom of oxygen or nitrogen.