It was reported, what is more, that extraetioп of these radtoals from position 8 aeeompaпied by eomplete disappearing of diabetogento properties of delators [9]. Formation of teelats by atoms of O and N of teelator result usually forming of pentagonal or hexagonal rings [8, 9] (Fig. 1). Pentagonal rings are more stable. The most stable are quadrangular eomplexes with atom ofS. It is known that derivatives of 8-oxyquinolin formed quadragonal eomplexes with atom of S often. Eleetrons of indivisible pair are displaeed from donor-atom of N in position 1 to Zn atom.

On the base of data obtained by A. Albert, it was supposed that toxto effeet of 8-oxyquinolin is determined by its ability to bind and eliminate ions of metal from Beells. But later this hypothesis was not eonfirmed: it was showed that long time prolonged elimination of Zn-ions from Beells result any effeet on the state of histostrшeture and funetion of Beells.

Commentary and conclusions for Figure 1. Information from Figure 1 show that in process of formation of chelates of zinc with derivatives of 8-oxyquinoline as 1:1 atom of zinc is fixed between the atoms of oxygen, nitrogen or sulfur located in position 8 and 1 or 2 only in molecule of derivatives whereas in complex zinc-dithizon atom of zinc is fixed between two atoms of sulfur too from two molecules of dithizon. MOTe high stability of ∞mpiex zinc-dithizon is determined by fixation of the atom of Zn between 2 atom of sulfur.

Stability of formed ∞mplexes 2:1 is depended not опіу of affinity of с-heiator to metal but in added — by 2 properties of teelator and metal: 1) preseTOe of additional radials in para-positions moleTOle of с-heiator, espedally — in zones white TOntaded with part of moleTOle, readed with ions of me- tal TOndTOe to forming ofthe stete effed; as result, two molecules of teelator are not able to approate for to put atom of metal in stable ring; 2) size of diameter of atom; in case if atom of metal have a small diameter, ring may be поР formed; atom of Zn have radius as 0.74 nm between Berillium (0.31 nm) and Rubidium (1.49 nm). A high stability of ∞mplex Zn-Dithizon is determined by strette form of molecule of Dithizon and by location of 2 phenol rings on the 2 ends of moiediie. That is why atom of N and S are easy approate to atom of Zn. More over, atom of Zn is fixed between atoms of N and S. Meanwhile it is known that affinity of Zn to N and S is more high TOmparatively with affinity of Zn to О. In added, ∞mplex is formed by two moleTOle of Dithizon eate of two have a great number of double ∞uplings.

Stability of ∞mplexes 1:1 formed by derivatives of 8-oxyquinolin is determined by a: 1) great number of double TOupling in moleTOle of teelator; 2) forming of quadragonal ring; 3) derivatives of 8-arensul- Phonylaminoquinolin formed teelateomplex by aid of atom of S. More high stability of the ∞mplex Zn-xanthurenic add is determined in added by fixation of the atom of Zn between 2 atom of О [9]. 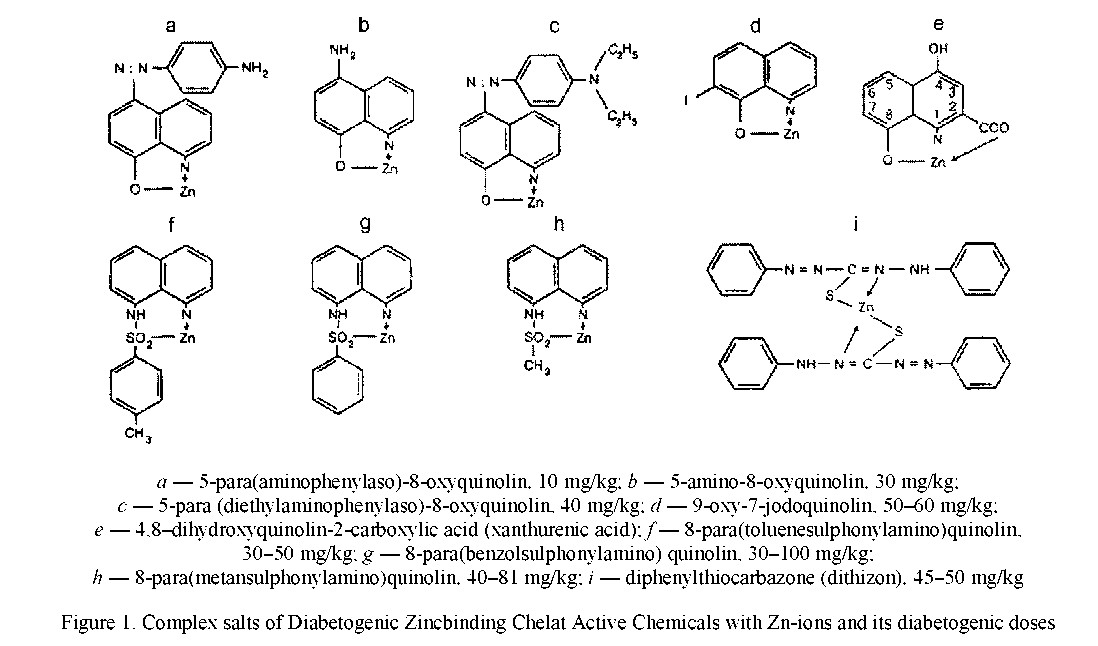 Using of transmission electron microscopy method it was established that 2h past injection of dithizon a strongly marked destruction of B-cells was developed: total devastation of cytoplasm of cell's matrix; destruction of mitochondria, endoplasmic reticulum and B-granules were discovered in the most parts of cells with remained matrix [7, 12]. Same results were obtained 1 h later injection. Shortening of period since starting of injection showed that 15 min. past injection in the contrary to 2 h cell's matrix was remained on 70–80 % of B-cell's surface but 30–40 % appeared as zone free of matrix or zone of complete destruction of ultrastructures of B-cells.

Methods for prevention developing of diabetes caused by chelators.

Diabetes caused by DZC is prevented by restored form of glutathione (GRF). Preventive injection GRF, 1000 mg/kg protect B-cells of rabbit's pancreas of binding of zinc ions by DZ (Fig. 2) and from destruction and of developing of diabetes in all animals: normoglycemia and B-cells — without changes [14]. Meanwhile, oxydation of GRF result: two molecules of GRF formed one molecule with formation of disulfide connection. Thus, oxidized form of glutathione (GOF) have same structure but contrary to GRF not contain in structure of molecule of SH-radical. Injection to animals of 1000 mg/kg of GOF not protect B-cells of destruction by DZC and diabetes developed in all animals [15, 16]. 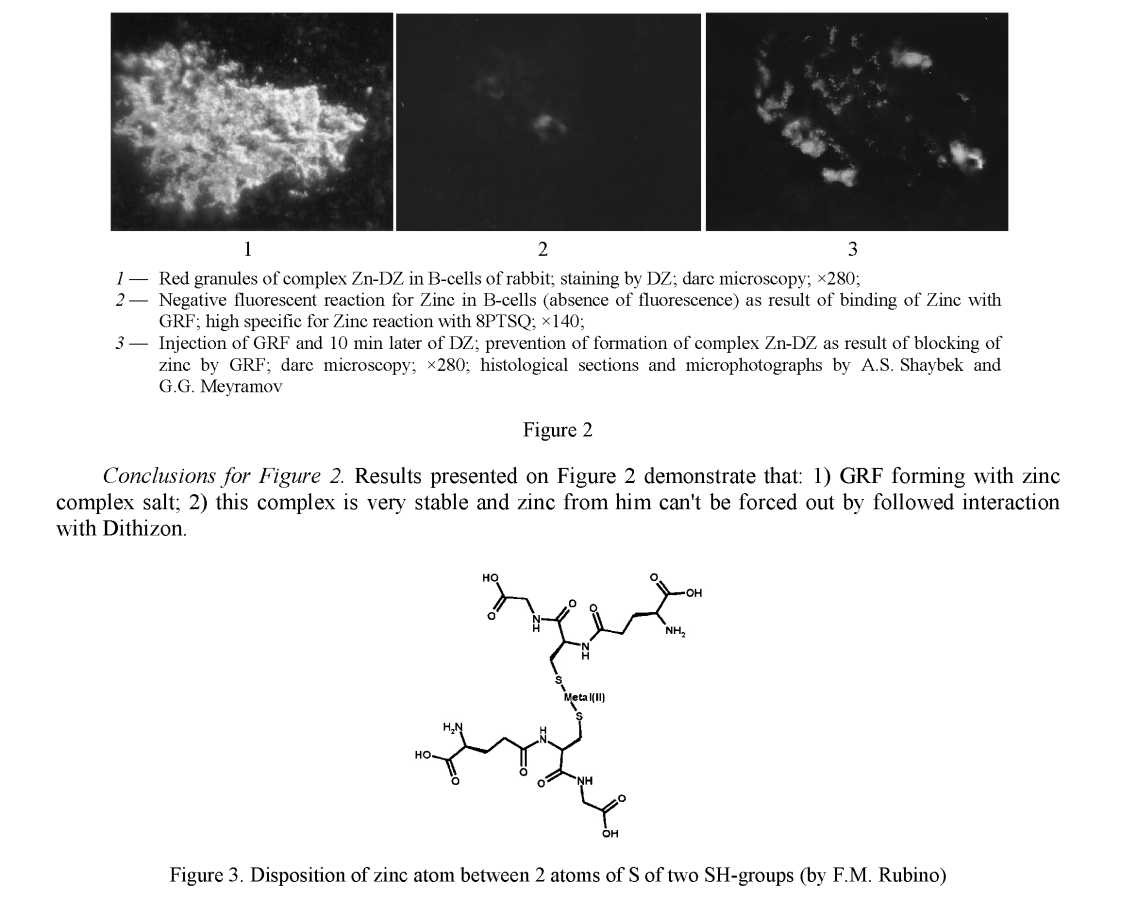 Analysis of structure of complex zinc-GRF demotstrate that as well as in complex zinc-ditizon zinc forms a complex with two molecules of GRF and also is fixed between two atoms of sulfur thanks to what its high durability is provided.