Results of researches on assessment of a water regime of leaves and water-retaining ability of some woody and shrubby plants in the conditions of the city of Zhezkazgan relating to three ecological groups in relation to moistening conditions are given in article. Results have shown that the greatest water-retaining ability xerophytes plants, the smallest to mesophytes possess. Following the results of researches all species have been divided into 3 groups: with low (from 0 to 40 %), average (from 40 to 70 %) and high (over 70 %) waterretaining ability. Syringa josikaea has entered into the first group; in the second — Populus alba, Malus sieversii; in a third — Berberis vulgaris, Elaeagnus oxycarpa, Amygdalus nana, Betula pendula, Crataegus sanguinea, Acacia alba, Pinus sylvestris, Juniperus sabina, Juniperus vulgaris. It should be noted that among mesophytes one species — Syringa josikaea has entered into group with low indicators of the water mode, then Amygdalus nana has entered into the second groups and Crataegus sanguinea — in the third the steadiest. Among mesoxerophytes in the 2nd group of stability are Malus sieversii and Populus alba, the others have entered into the third group. Among xerophytes all species have appeared in the third group of stability. We recommend to enter plants from the third group into mass gardening of the Zhezkazgan region, the second group — it is limited on condition of regular watering, the first group — only for private gardening on plentiful watering.

Green plantings are the most important element of town planning, the factor which is of great importance in the sanitary and hygienic, architectural and planning and social relation [1–3]. The most important hygienic feature of green plantings is expressed in regulation of the thermal and radiation modes, in creation of the microclimate providing comfortable environmental conditions. They exert impact on change of microclimatic environmental conditions, improving the temperature and moist and radiation modes, promote purification of atmospheric air of pollution [4–7], favorably influence a human body. In the presence of green plantings in the city of people it is protected from direct solar radiation thanks to a big surface of leaves, trunks, and also the soil having lower temperature than air temperature. In this regard thermos lysis conditions are facilitated, heat exchange and health of the human improves.

Climatic conditions of the Zhezkazgan zone of the Karaganda region differ extremely in a low rainfall during the summer period and high dryness of air [8]. Therefore when planning green plantings, practical gardening there is a question of selection of cultures capable to transfer high summer temperatures, low humidity of air and constant deficiency of moisture. And, a number of cultures can well grow on poor watering, a row — demand regular irrigation, some — are exacting to plentiful moistening. One of factors of resistance of plants to adverse conditions is the ability to transfer high summer temperatures and deficiency of moisture that is in many respects connected with physiological features of leaves, in particular, ability of leaves to hold moisture [9].

Proceeding from the aforesaid, the purpose of the real research was — to define a water regime of leaves and water-retaining ability of various ecological groups of woody and shrubby plants in the conditions of the city of Zhezkazgan.

Researches were conducted during 2015–2017 in the territory of the city of Zhezkazgan and also on sites of dendrology of the Zhezkazgan botanical garden.

Objects of researches were woody and shrubby plants of various ecological groups:

Studying of content of water in leaves and water-retaining ability was carried out to the periods of the greatest tension of stressful factors: June, July and beginning of August.

Assessment of water regime and water-retaining ability of plants was carried out according to «The program and a technique of a sort breeding of fruit, berry and nut bearing crops» [10, 11]. Leaves collected in the morning at ten o'clock from different tiers. Later we made a weight after collecting (crude weight). After that leaves of plants left for 3 hours with repeated weighing. Final weighing was made after drying in a drying cabinet within a day at a temperature of 50 °C.

The water regime of leaves was counted as a difference between crude and dry weight.

Assessment of water-retaining ability of plants of different groups has shown an essential difference between water-retaining ability of leaves of these cultures. At the beginning of summer the greatest resistance to the hot period coniferous trees, Acacia alba and Elaeagnus oxycarpa have shown (Table), and the lowest indicators of the water mode are revealed for Syringa josikaea and Amygdalus nana.

It is noted that at the beginning of summer (June) the water regime of leaves of woody and shrubby plants was rather high that is explained by long spring rains and rather low temperatures during this period. Further (July-August) the water regime decreases.

By data T.N. Barabash [12], at plants at the beginning of vegetation a water regime of tissues of leaves the greatest — from 60 to 90 %, and at the end of August when plants adapt to droughty conditions, in process of aging of leaves, this indicator decreases by 15–30 % [13, 14]. For all studied wood and shrubby cultures the content of water in June and August has appeared higher than 50 % (Fig. 1) that demonstrates sufficient providing with water at irrigation.

Low indicators in July for some cultures are explained by hot weather, lack of rainfall and deficiency of water for watering.

The analysis of water-retaining ability has shown that during the spring and summer period indicators at a part of plants were minimum, whereas in the middle and the end of the summer period — is higher (Fig. 2). 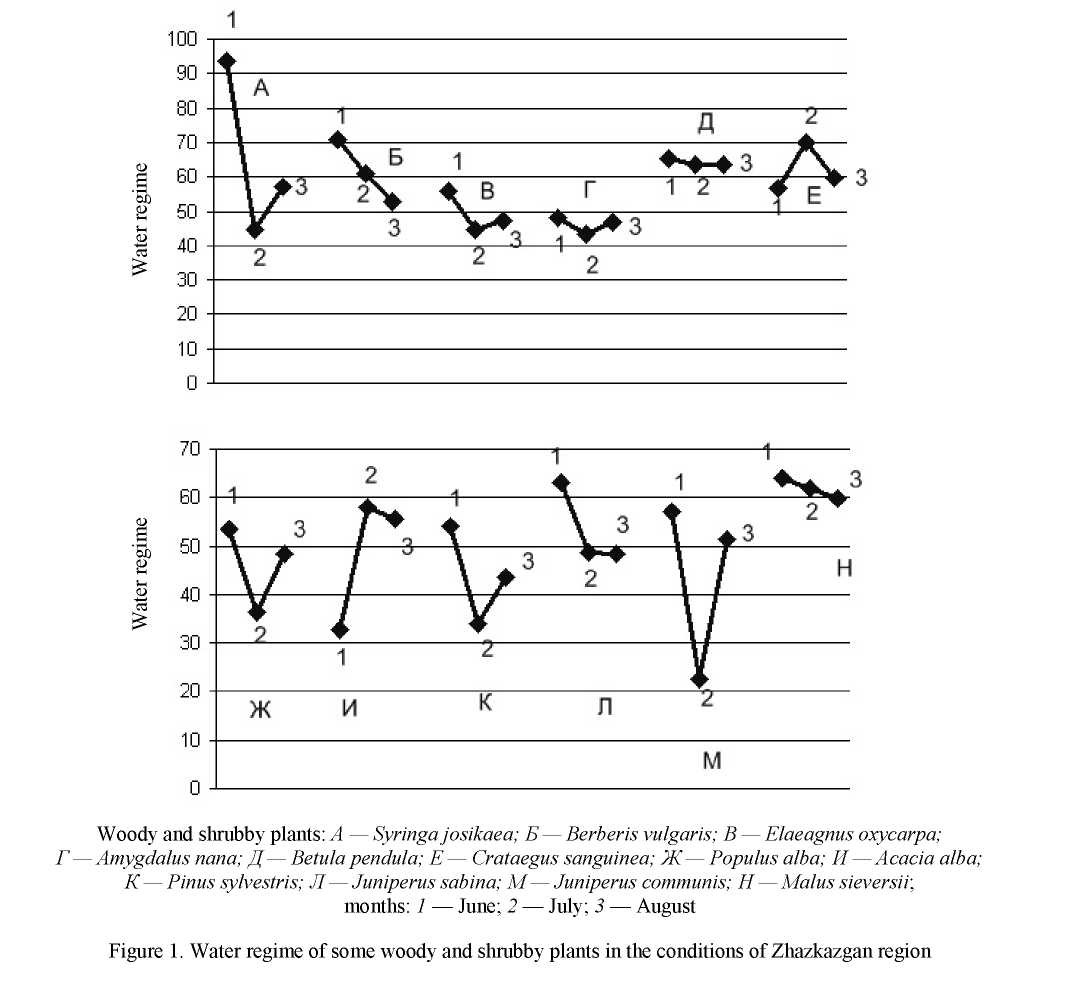 So, all cultures on water-retaining ability have been divided into 3 groups: 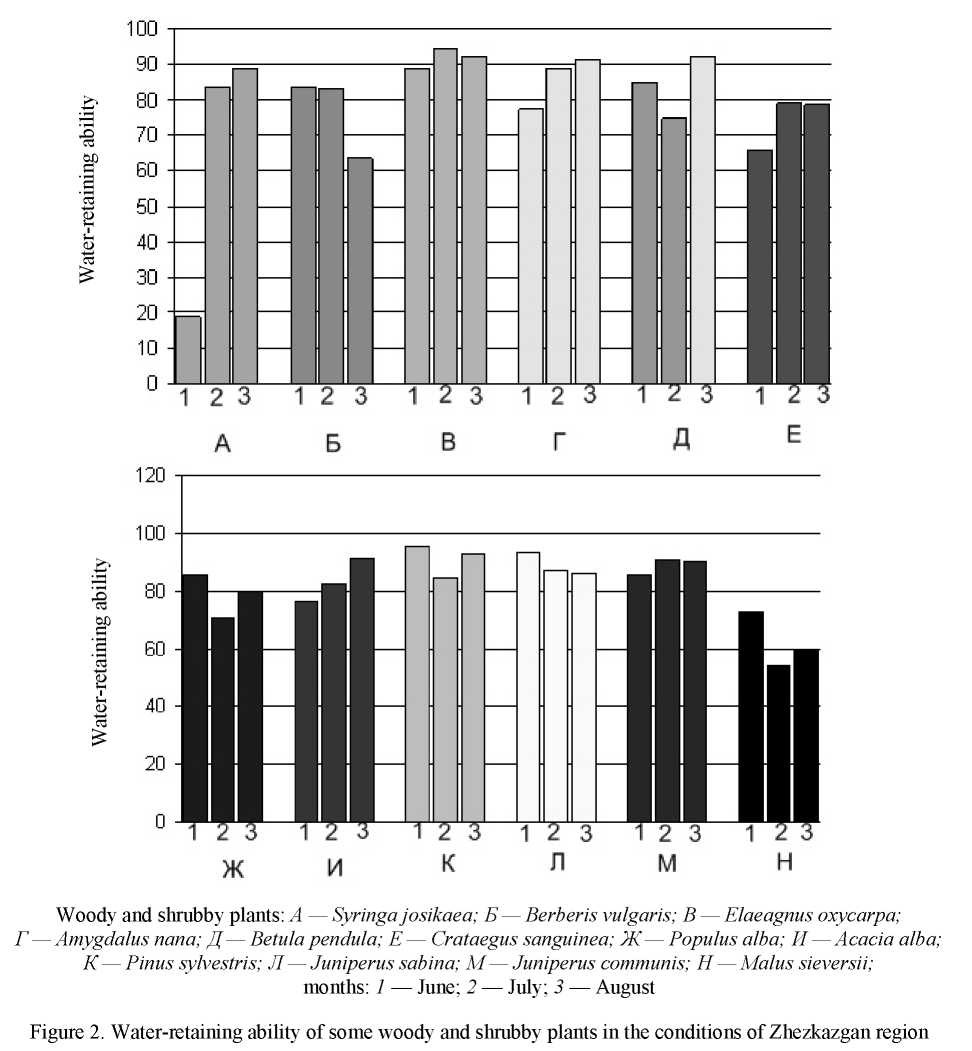 Thus, it has been established that during the spring and summer period indicators of deduction of moisture at a part of plants were minimum whereas in the middle and the end of the summer period these indicators increase.

We recommend to enter plants from the third group into mass gardening of the Zhezkazgan region, the second group — it is limited on condition of regular watering, the first group — only for private gardening on plentiful watering.