The article contains information on the biological methods effectiveness for determining the saprobity degree of the water bodies by the microscopic representatives species composition of aquatic invertebrates. Aquatic invertebrates are very convenient for bioindication of the ecological state of aquatic ecosystems, as they make unnecessary (or often complement) the use of expensive and time-consuming physical and chemical methods of analysis of environmental parameters; reflect and record the rate of changes in the environment. Aquatic invertebrates, which are bioindicators of contamination, due to the impact of certain factors may show different degrees of intensity of the response in the form of dominance or partial or complete disappearance. In our opinion, there is a direct relationship between the intensity of the invertebrate response-indicators and water quality. It was used one of the most developed biological methods for evaluating water quality using indicator species of zooplankton and zoobenthos — the Pantle-Buck method in the Sladecek modification. The possibilities of studying the anatomical and morphological organization of microscopic fauna in the educational process are estimated. The hydrobionts species were determined, and a species list inhabiting this watercourse was also compiled. The indicator organisms have been identified, the organic contamination of the watercourse under investigation has been determined.

One of the actual directions in bioindicational research is the study of aquatic invertebrates as objects- indicators of the state of the aquatic environment. Most often, as an indicator feature, faunistic composition of aquatic organisms and its changes under the influence of any factors that violate the normal hydrochemical and hydrological regime of reservoirs (watercourses) are offered. At the same time, not enough attention is paid to the justification of the use of different objects and the parameters of the intensity of this effect on the reaction of aquatic invertebrates to the change in the regime of hydrobiocenoses. An integrated approach to the use of different methods of assessment of the state of the aquatic environment is not sufficiently used [2]. At the same time, aquatic invertebrates are a very convenient object for bioindication of the state of aquatic ecosystems, as they make an optional (or often complementary) the use of expensive and time-consuming physical and chemical methods of analysis of parameters of the environment; reflect and record the speed of what is happening in the environment changes [3].

Aquatic invertebrates, which are bioindicators of contamination, due to the impact of certain factors may show different degrees of intensity of the response in the form of dominance or partial or complete disappearance. In our opinion, there is a direct relationship between the intensity of the invertebrate responseindicators and water quality.

Thus, the analysis of methods of ecological assessment of aquatic ecosystems shows that aquatic invertebrates, which are used by many researchers as bioindicators to assess the well-being or disadvantage of hydrobiocenosis, may well be used for the assessment of our water body.

The objects of research are zooplankton and zoobenthos of the section of the Nura river (Karaganda region, Bukhar-Zhyrau district, village named after G. Mustafin).

The species diversity of invertebrates of this stream allows to determine the degree of saprobity, thus making it an ideal material for research. The study was conducted in certain seasons from January to December 2017.

The saprobity index of organisms identified in the table «List of species of organisms of the sewage treatment facility indicating saprobes valences on Sladecek (1973)» [4], «Unified methods of investigation of water quality» edited by V. Sladecek (1977) [5]; «Species the indices of saprobity and the distribution of the abundance of algae-indicators in zones of self-purification», «Biological Monitoring: Signals from the Envi- ronment» [6].

One of the most developed biological methods for assessing water quality is the Pantle-Buck method (1955) using indicator species of zoobenthos. Among the simplest, rotifers and worms, there are types of indicators of various kinds of contamination, on the basis of which the saprobity index in the watercourse is determined. The ratio of indicator species to the five known degrees of saprobity (s) and the relative frequency of their occurrence (h) are taken into account. These values are included in the formula (1) calculation of the saprobity index — S:

During the microscopy, a microscopic video complex based on BinaLogic 6XB-PC was used, which displays the image on the computer. With the help of Altami Studio were also taken pictures of algae, which made it easier to determine the species composition of indicator organisms. To make the pictures clearer, they were processed in Adobe photoshop CC. The images were applied filters sharpness, color contrast and blur. Sharpness is applied to increase the accuracy of the resulting photos and facilitate the definition of the species. Color contrast filter is used for dim photos to increase color contrast. During the microscopy the species of zooplankton and zoobenthos belonging to 16 genera were determined.

For a more reliable assessment of the level of contamination of the watercourse, we used biological indicators such as phytoplankton and phytobentos as an additional indicator of saprobity.

We studied the species composition of the studied areas of the watercourse. The study of species composition is not considered to be mandatory to identify the quality of water purification, but still the determination to the species will give a more accurate idea of the biocenosis of the watercourse and its changes under the influence of various factors.

During the microscopy, a microscopic video complex based on BinaLogic 6XB-PC was used, which displays the image on the computer. With the help of Altami Studio, invertebrate images were also taken, which made it easier to determine the species composition of indicator organisms. To make the pictures clearer, they were processed in Adobe Photoshop CC. The images were applied filters sharpness, color contrast and blur. Sharpness is applied to increase the accuracy of the resulting photos and facilitate the definition of the species. Color contrast filter is used for dim photos to increase color contrast. During microscopy, the species of indicator invertebrates belonging to 5 genera were determined.

Difflugia acuminata (Ehrenberg, 1838) (Fig. 1). The shell is pitcher-like, inlaid with grains of sand and other mineral particles, among which may be organic material. At the back end — the shell has a conical growth, inlaid with the same material as the sink. The length of the shell is 80–340, the width in the extended part is 40-150 µm.

The species is widely distributed in the coastal zones of water bodies, the layer of detritus.

Rotaria rotatoria (Pallas, 1766) (Fig. 2). The body varies from small to large, usually narrow, with a long leg, from whitish to yellowish-brown. The crown is much wider than the head. Proboscis is short. The dorsal tentacle is thin, longer than the width of the trunk. The upper lip is drawn in, the lower one is wide and hanging down. The neck is short, wide. The body is covered with folds, sometimes graininess, from the femoral part is slightly separated. The leg is very long, 6-segmented, with spurs gradually tapering into sharp ends and diverging to the sides. Fingers long, slender; dorsal finger is longer than the abdominal. Spurs strongly divergent, sometimes reduced to sharp spikes. The eye stains are small. In uncus 2/2 teeth.

Rotaria neptunia (Ehrenberg, 1832) (Fig. 3). The body is unusually long, with dense covers. The trunk is cylindrical, very thin, densely covered with points. The crown is small, narrow. Proboscis short, wide, 2- segmented. The dorsal tentacle is short. Leg with thin segments, extremely long, longer than half of the entire length of the body. Spurs and fingers are very thin, divergent. Eye spots are small but well visible. In uncus 2/2 teeth. Body length 725–1600 µm.

It occurs in small overgrown and polluted waters, in detritus, or, more rarely in plankton. Polisaprobic species. It is widely distributed. Cosmopolitan species [8].

During the study period we found representatives of Crustacea subtype, including individuals of 2 classes: Maxillopoda, Branchiopoda.

Eucyclops serrulatus (Fig. 4) has a slender body, correct oval shape. Posterior thoracic segment on the sides with a group of small hairs. Abdomen is thin. The genital segment in the main part is strongly expanded, its rear part is almost cylindrical, only slightly narrowing posteriorly. Length of females 0.8–1.5, males

E. serrulatus is a benthic species that lives in a wide variety of standing and flowing water bodies, in thickets of water-coastal vegetation, widely distributed in various small bodies of water [9].

To the class Branchiopoda include the species Alona quadrangularis.

In the area of bushes there are species of genus Alona — small crustaceans with oval shell with flattened on the ventral edge of the valves (Fig. 5).

The body of Daphnia, except for the head Department, is enclosed in a carapax, having the form of a bivalve chitin shell. Daphnia the head is elongated in Church growth — rostrum. On the head there is an unpaired facet eye formed as a result of the merger of two eyes. Thoracic Daphnia has no traces of segmentation, and the number of its constituent segments can be judged by the number of thoracic limbs. Daphnia has five pairs. All limbs carry external (exit polls) and internal (audits) growths. The closest to the base of the exit polls-epipodites, perform the function of gills. 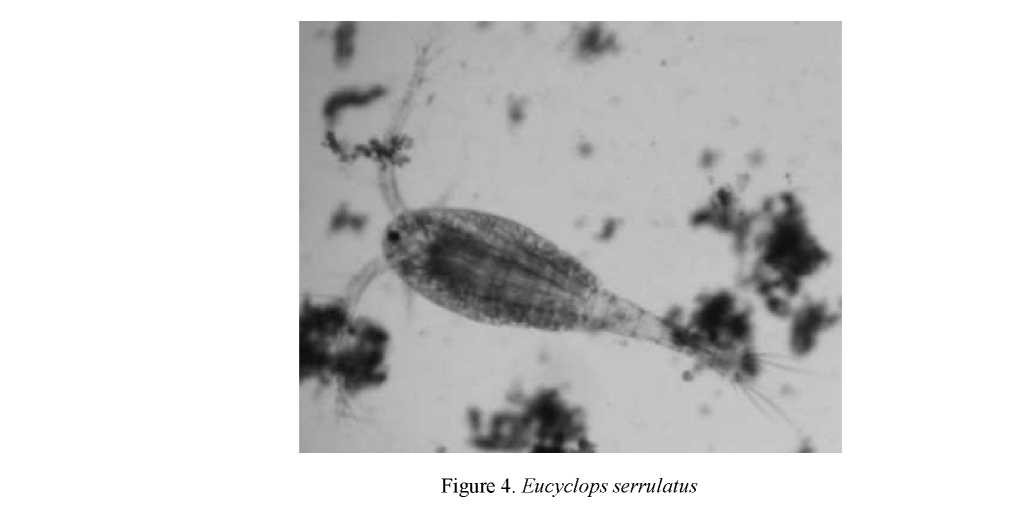 We also found representatives of the Mollusca: Lymnaea stagnalis type.

Common pond (Lymnaea stagnalis) is a species of freshwater molluscs from the category of pulmonary molluscs, common in the Holarctic (Fig. 6).

The pond is fed mostly with algae, detritus and carrion. At the common pond snail has a lung, where gas exchange occurs blood with air, the heart with auricle and ventricle providing blood flow in open circulatory system, peripharyngeal nerve ganglia, language in the form of a notched trowel, the digestive system — throat, stomach, liver, intestines. Pond snails are hermaphrodites [10].

Hydrofauna is represented by 6 species of aquatic invertebrates, belonging to 5 genera.

We have conducted saprobiological analysis of river Nura at Pantle-Buck method modified by Sladecek (zooplankton, zoobenthos).

The characteristics of saprobity level in zooplankton, zoobenthos of the Nura river are shown in Table 2.

Species composition, indicator properties, and the occurrence of aquatic organisms at the site of the Nura river (2017)

The total number of species of zoohydrobionts with an indicator value found in the studied watercourse is 6, belonging to 5 classes: Tubulinea, Maxillopoda, Branchiopoda and Gastropoda — 17 % (1 species), Rotifera — 32 % (2 species). Saprobity is calculated separately for the section of the Nura river. The following data are obtained: the saprobity of the river water is 2.2. Also from table 1 shows that the highest percentage of species of hydrobionts belong to the β-mesosaprobic organisms (3 species).

The following conclusions can be drawn from the results of the work:

Hydrobionts was represented by 4 types, 5 classes, 5 genera, 6 species. All 6 species belong to indicator organisms, the most significant are representatives of Difflugia acuminata, Eucyclops serrulatus, Lymnaea stagnalis.

The investigated water flow belongs to β-saprobic (3 class of water quality-organically «moderately contamination») according to the degree of saprobity in the Pantle-Buck.

The work performed can be useful for determining the water quality of natural waters. The species composition and the percentage of occurrence of aquatic organisms allows to determine the environmental conditions for aquatic organisms and to decide what should be done to preserve the sustainable biocenosis. The study of the species composition of zooplankton, zoobenthos section of the river Nura complements the information about the state of aquatic ecosystems of the Karaganda region.