This article indicated the investigation results on the morphofunctional blood changes of experimental animals with acute combined intoxication with heavy metal salts (zinc, copper, arsenic) carried out on 40 white outbred pubescent rats that were divided into four groups. It is noteworthy that heavy metals can accumulate in the animal and human organism. As the result, disturbed the functions of the different organs and systems and changed of hematological blood indicators. Biochemistry of blood can diagnose the pathology of the organism. There were used such solutions as copper sulfate, zinc sulphate and sodium arsenite as toxicants, which were intragastrically injected once. Blood sampling was conducted the next day after the injection. The results of our investigation showed that acute combined intoxication with zinc, copper and arsenic salts leads to the development of inflammatory processes in the body, which can be indicated by an increase of such blood indicators as leukocytes, erythrocytes, hemoglobin, hematocrit, mean hemoglobin in erythrocyte (MCH) and speed erythrocyte sedimentation (ESR). It was found that the combined effect of zinc and arsenic has the greatest toxic effect.

One of the most important anthropogenic factors in the biosphere is pollution of the environment, and as a result, the accumulation of toxic substances in nature, which adversely affects the soil, plants, animals and humans. The intensification of industrial production and chemicalization of agriculture leads to the appearance of chemical compounds in the ecosystem, which are toxic to the people [1].

Annually, there is an increase in the amount of emissions of contaminators, which contain heavy metals, into the environment. Toxicants are able to accumulate in nature and move from plants to living organisms, having a negative impact on the health of animals and humans.

Heavy metals are dangerous substances that pose a serious risk to ecosystems and the health of organisms because of their high toxicity and stability in nature. Accumulating in the environment, heavy metals can be transported to crops and negatively affect human health through the food chain [2, 3].

In some works devoted to the problems of environmental pollution and environmental monitoring, list of heavy metals includes more than 40 metals from D.I. Mendeleev periodic table with the atomic mass of more than 50 atomic units: V, Cr, Mn, Fe, Co, Ni, Cu, Zn, Mo, Cd, Sn, Hg, Pb, Bi, etc. [4]. For many industrially developed cities, the presence of a separate pollutant in the environment is not typical, but there is always a complex of heavy metals capable of having a combined effect on the body, in which both the summation of effects and their potentiation can be observed [5]. Therefore, the study of the technogenic accumulation consequences of heavy metals and anthropogenic natural environment pollution has now become important for the health and safety of the population [6].

In Kazakhstan, soils pollution with heavy metals is one of the relevant problems, especially in the vicinity of large industrial cities. The main environmental contaminants are represented by industrial enterprises, mining, energy, household waste, motor transport, etc [7]. The active use of natural resources, the development of the extractive industry led to the accumulation of harmful substances in the biosphere, as a result of which hundreds of land hectares became unsuitable for agricultural purposes [8].

For example, in the Akmola region, the mining, chemical, light and food industries are well developed. There are at about 20 mining and processing enterprises in the region, which use such minerals as gold, uranium-bearing, iron-containing ores and building materials. The ores in the fields contain also toxic substances, such as radioactive isotopes of uranium, thorium, potassium-40, arsenic, beryllium, selenium, phosphorus, etc. [9].

These substances, after getting into the human body, can disrupt the functions of some organs, cause morphofunctional changes in the blood, as it is indicated by hematological and biochemical blood indicators.

Blood is an important physiological system, which plays a huge role in the functioning of the whole organism, therefore hematological studies are of great value [11].

As it is known, blood is the internal environment of the body, which ensures the vital activity of cells, being an intermediary between them and the external environment. Therefore, according to the morphological and biochemical changes in blood, one can judge about certain pathological processes occurring in the body. Toxic poisoning from the hematological indicators can cause a change in the concentration of hemoglobin, erythrocytes. The eosinophilia occurs and the resistance of erythrocytes decreases [12].

The most detailed study of the changes in morphofunctional erythrocyte indicators during chemicals intoxication of different nature, which a person faces each day, allows determining the consequences of their effects properly and also selecting the most effective adjustments under the existing environmental conditions. The toxic effect of various heavy metal compounds is mainly due to the interaction with the proteins of the body, so they are called protein poisons [13].

G.R. Khanturina on the basis of E.A. Buketov Karaganda State University, studied the effect of heavy metals (zinc sulphates, copper, iron and cobalt sulfates) on the morphophysiological changes in rat blood. She revealed that as a result of acute intoxication salts of zinc, copper and iron there was leucocytosis developing, the number of red blood cells decreasing, and also the fall in the erythrocyte concentration [14].

Blood was collected the next day after the injection, from the carotid artery of experimental animals. Hematologic blood indicators were determined on a modern automatic hematological analyzer called Nihon Kohden Celltac E (Japan). The following methods were used during the investigation: the white blood cell was determined with the help of the unified counting method in Goryaev's counting chamber, the number of erythrocytes with the help of the unified counting with 0.9 % sodium chloride solution and the hemoglobin concentration were determined by hemoglobin cyanide method, the hematocrit was determined by a calculation, based on the number of erythrocytes in a certain volume of blood and the average volume of one erythrocyte. Average concentration of hemoglobin in the erythrocyte (MCH) was calculated by the formula:

ESR was determined with the help of PR-3 (ESR meter, Panchenkov's apparatus), which is a plastic tripod with nests for the installation of 20 capillaries. The Panchenkov capillary is a standard glass capillary for the determination of ESR: its length is 172 mm, outer diameter is 5 mm and the hole diameter is 1.0 mm. There is also a clear brown graduation from 0 to 10 cm, scale step of 1.0 mm high the upper division of the

It was found that in acute combination toxicity with copper sulfate, zinc sulfate and sodium arsenite salts, the number of leukocytes in all experimental groups increased. In the second group this index increased by 80 % (p <0.05), in the third group by 29.15 % (p <0.05), in the fourth group by 22.35 % (p <0.05) in comparison with the control group (Table). A pronounced leucocytosis (an increase in the number of leukocytes per unit blood volume) is probably caused by hyperplasia of the myeloid or lymphatic tissue caused by the toxic effect of salts of heavy metals. As a result, myelopoiesis is activated and the output of leukocytes from the bone marrow is increased in the systemic circulation.

It can be seen from Figure that the number of erythrocytes in the groups increased: in the second group it increased by 11.01 % (p <0.01), in the third group by 16.33 % (p <0.05), in the fourth by 12.66 % (p <0.05) in comparison with the control group. This is probably due to an increase in the production of red blood cells in the red bone marrow, the lack of oxygen in the tissues of the body, the violation of the liver, the development of renal pathology, and as a consequence the release of erythropoietin. 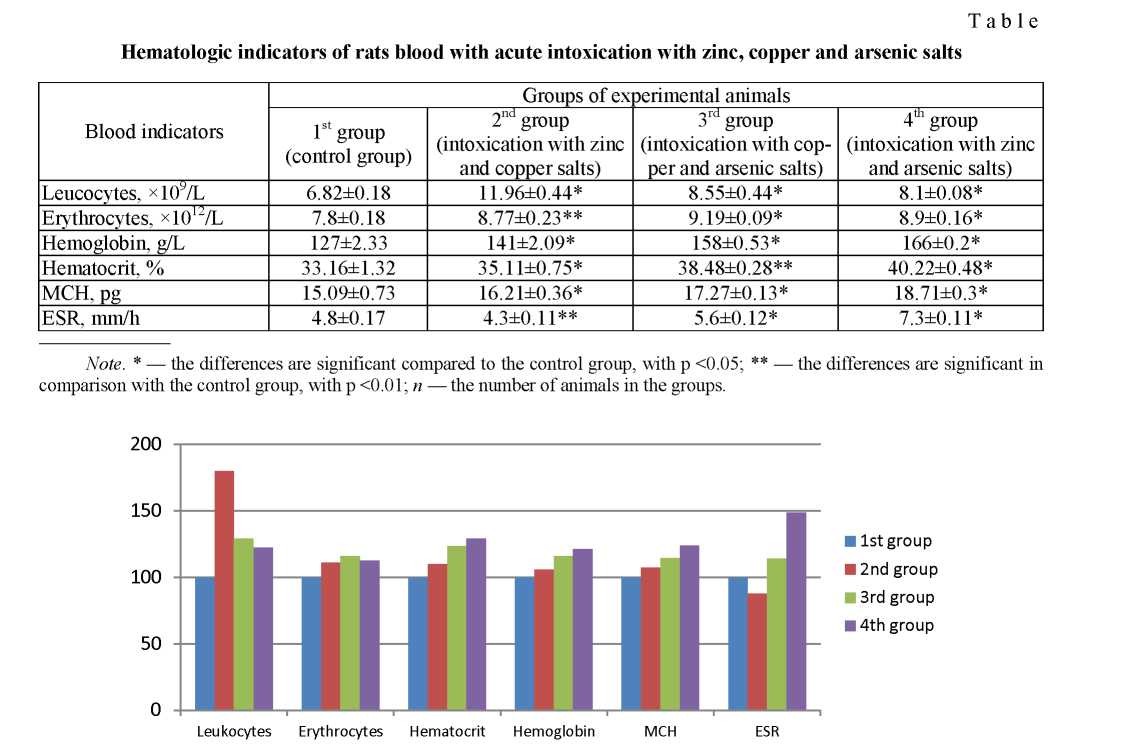 soning. Perhaps, erythrocytosis is associated with an increase in the viscosity of blood in the vessels, and also with the lack of oxygen.

In the course of the experiment it was found that the hematocrit increased in the second group by 5.88 % (p <0.05), in the third group by 16.04 % (p <0.05), in the fourth group 21.29 % (p <0,05), in comparison with the control group. Perhaps this is due to the development of pathological processes in the body, increased blood density, which may indicate leukemia or tumor processes in the kidneys, and may also indicate an oxygen deficiency, along with hemoglobin and the number of erythrocytes increase.

ESR (sedimentation rate of erythrocytes) in the second group decreased by 12.2 % (p <0.05), in the third and fourth groups increased by 14.28 % (p <0.05) and 48.9 % (p <0.05) consequently. Decrease in ESR can be caused by a violation of water-salt metabolism in the body (hyperhydration) or progressive dystrophy of the muscles (myodystrophy). Increase in the rate of erythrocyte sedimentation is probably due to a change in the protein composition of the blood, i.e. increase in fibrinogen, alpha and gamma globulins, and decrease in albumins. When developing pathological processes on the surface of the erythrocyte, molecules of fibrinogen, gamma globulin, paraprotein and other proteins are deposited, which promotes the adhesion of red blood cells to each other, and as a result, the rate of erythrocyte sedimentation increases.

All of the above can prove that the group of combined action of zinc and arsenic had the greatest toxic effect on the change in morphofunctional blood indicators.