In article is presented the results of studies of protein and carbohydrate metabolism in experimental animals under the influence of copper acetate in the tolerable daily intake (TDI) doses. Positive effects of correction with the infusion of Beta vulgaris seeds were studied. It is shown that the consumption of copper acetate by the animals at the level of TDI has a negative effect on the basic biochemical parameters of protein and carbohydrate metabolism. As a result of the study, it was found that the main indicators of blood biochemistry are directly depended on the duration of the effect of copper on the body of experimental animals. Receiving a solution from the infusion of Beta vulgaris's seeds as a correction in the presence of copper acetate caused a positive effect, which is manifested by a decrease in the synthesis of metabolic wastes (urea and creatinine). Copper acetate after correcting of infusion of seeds activated the processes of protein synthesis and glycolysis. Apparently, the intake of copper acetate, causing toxic effects, is simultaneously a stress factor that caused a significant release of glucose into the blood, which is the manifestation of the acute phase of the stress response in the first group. A prolonged exposure to copper acetate led to depletion of energy reserves and a decrease in the deposition of glucose in the liver, which is manifested by a significant decrease in plasma glucose levels in experimental animals after 4 months of the experiment.

Due to the wide use of metals in the production of various products for agriculture, industry, medicine and everyday life, their compounds can penetrate the ecological environment and the human body through food chains [1–3].

In various fields of technology, allows are widely used with the use of heavy metals, including those that are part of copper-oxide galvanic cells and batteries [4, 5]. The result of widespread use of copper is its accumulation in various systems of the biosphere, the inclusion of copper and its compounds in the trophic connections of organisms and, as a consequence, the accumulation of copper in the organisms of animals and humans. In turn, this leads to a disruption of biochemical processes, which result in pathological abnormalities in the body [6–8].

The intake and impact of metal on the body and its bioavailability depend not only on its chemical properties, interactions with other metals, but also on its form [9–11]. Studies by X. Wu, Z. Liu, et al. indicated that a moderately high zinc in the diet (Zn:Cu — 40:1) significantly reduces the digestibility of Cu. In addition, a moderately high Cu content in the diet increases the Cu delay, without decreasing Zn absorption, and the moderately high Zn in the diet lowers the copper concentration in the plasma and the carbon dioxide release activity [12].

After entering the blood, copper is mainly distributed between the erythrocytes and plasma. In erythrocytes 60 % of copper is in the form of copper-zinc- metallic enzyme superoxide dismutase, the remaining 40 % are weakly bound to other proteins and amino acids [13]. This, in turn, can lead to a change in the balance in many biochemical processes in the body.

In the studies of O.V. Roshchina it is shown that the accumulation of copper causes inhibition of aminotransferase activity, which indicated changes in the regulation of protein metabolism towards an increase in the content of free amino acids, including aspartic, which serves as a substrate for gluconeogenesis [14].

Pandey et al. found a decrease in GST activity and the level of reduced glutathione in the tissues of the spotted snakehead (Channa punctata) in the experiment on the exposure to a mixture of metals CuCl2 (50 μgZl), CdCl2, FeCl2 and NiCl2 [16].

The active effect of heavy metals, including copper on the biochemical indicators of blood and on the body as a whole, requires the development and study of corrective measures.

Recently, many scientific studies have appeared in which the authors use nanoparticles as correctors [17, 18]. So, in the studies of A. Slobodskov it is shown that copper nanoparticles reduce the level of bilirubin in the blood and increase the level of aspartate aminotransferase and alkaline phosphatase [17].

The second direction in development of tools for correcting the intake of copper in the body can serve the infusions of plant objects that have high resistance to these metals. In particular, M.R. Khanturin, R.R. Beisenova found that in acute intoxication with salts of zinc and copper, the extract of Sanguisórba officinalis normalized the parameters of peripheral blood [19].

One of the drugs that can be used to reduce the toxic effects of metals on the body was the infusion of Beta vulgaris's seeds. However, in the literature, we did not find any references to the use of extracts of this plant as a corrector when heavy metals enter the body.

Purpose of the study.

The purpose of this study was to study the effect of the infusion of Beet vulgaris's seeds on the biochemical indices of rat blood after exposure to copper acetate at the maximum permissible concentrations.

The studies were conducted in the laboratory of ecological and genetic studies of Biological and Geographical Faculty of academician Ye.A. Buketov Karaganda State University. During the research, the ethical principles set out in the European Community Directive (2010/63/EC) and the requirements of the World Society for the Protection of Animals (WSPA) were observed.

The experiments were carried out on 40 white random-bred male rats. The animals were of the same age and were kept in standard vivarium conditions with free access to food and water. The feed ration of the tested animals consisted of solid grain feed, vegetable supplements and water in a ratio of 10×30×20 g.

The statistical processing of the results was carried out using the Microsoft Excel 2007 application package. Differences in the dynamics of biochemical parameters were calculated by comparing the mean values using the N.A. Plokhinsky table.

As a result of the study of biochemical parameters of blood, dynamic changes were established. The level of protein in the blood of rats of the first group was 73.6 ± 7.17 g/l, while in the second group the protein level tended to increase and amounted to 74.6 ± 4.54 g/l, which was higher in comparison with the control and the first group, although the differences were not significant (Fig. 1).

The application of beetroot's seed infusion led to an increase in the total protein index. Thus, the level of total protein in the third group was 76.8 ± 4.04 g/l, which was 5.2 % higher than in the control and 2.9 % higher than in the second group. The calculation of the significance of the differences between the second, third and fourth groups showed absent of no significant deviations.

It should be noted that the use of the infusion of Beta vulgaris's seeds not only affects the significant decrease in urea levels in the blood of animals, but also causes a more individual reaction of the body to the complex effect of copper acetate and seed infusion, as evidenced by the protein and urea values. 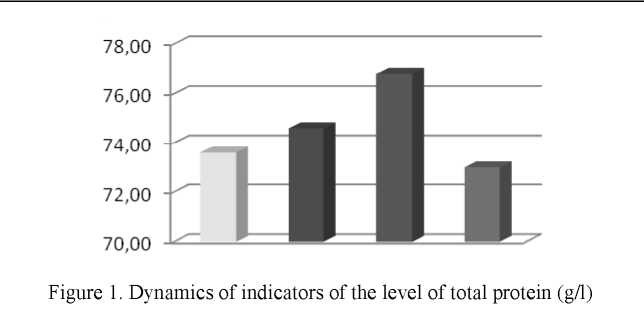 Reduced level of creatinine in the first group of rats may be due to a disruption of the skeletal and cardiac muscles work, since copper, being a natural zinc antagonist, when used in high amounts, can inhibit muscle contraction processes in which zinc plays an important role [23, 24].

A comparison of the absolute values of the level of creatinine between the third and fourth groups revealed that the relative difference in the level of these indicators was 11.7 %.

In the animals of the control group, the blood glucose level for the fourth month of the experiment was

Thus, as a result of the studies, it was found that biochemical blood values are directly dependent on the duration of exposure to copper of the body of experimental animals. Consumption of copper at a concentration of 0.01 g/kg of weight (TDI) significantly affects the indices of urea and creatinine towards their decrease, which indicates a change in metabolic processes, accompanied by disorders of protein metabolism. Apparently, the use of copper acetate, which has a toxic effect, is simultaneously a stress factor that caused a significant release of glucose into the blood, which is the manifestation of the acute phase of the stress response in the first group. A prolonged exposure to copper acetate leads to depletion of energy reserves and a decrease in the deposition of glucose in the liver, which is manifested by a significant decrease in plasma glucose levels in experimental animals after 4 months of the experiment. The main mechanism of replenishment of energy resources is the use of protein stored in the body, which in our case is accompanied by a decrease in protein metabolites in the blood. The solution from the infusion of Вéţа 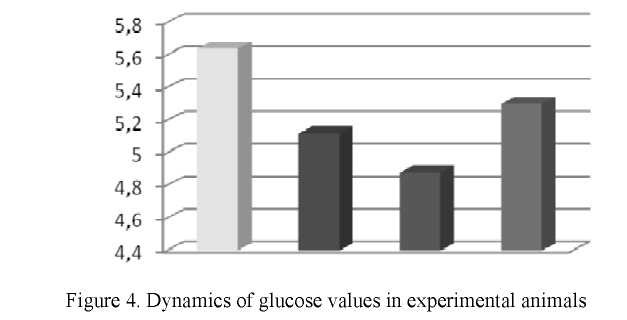 vulgɑris's seeds as a correction, reduced the toxic effect of copper acetate and improves the processes of protein synthesis and glycolysis.